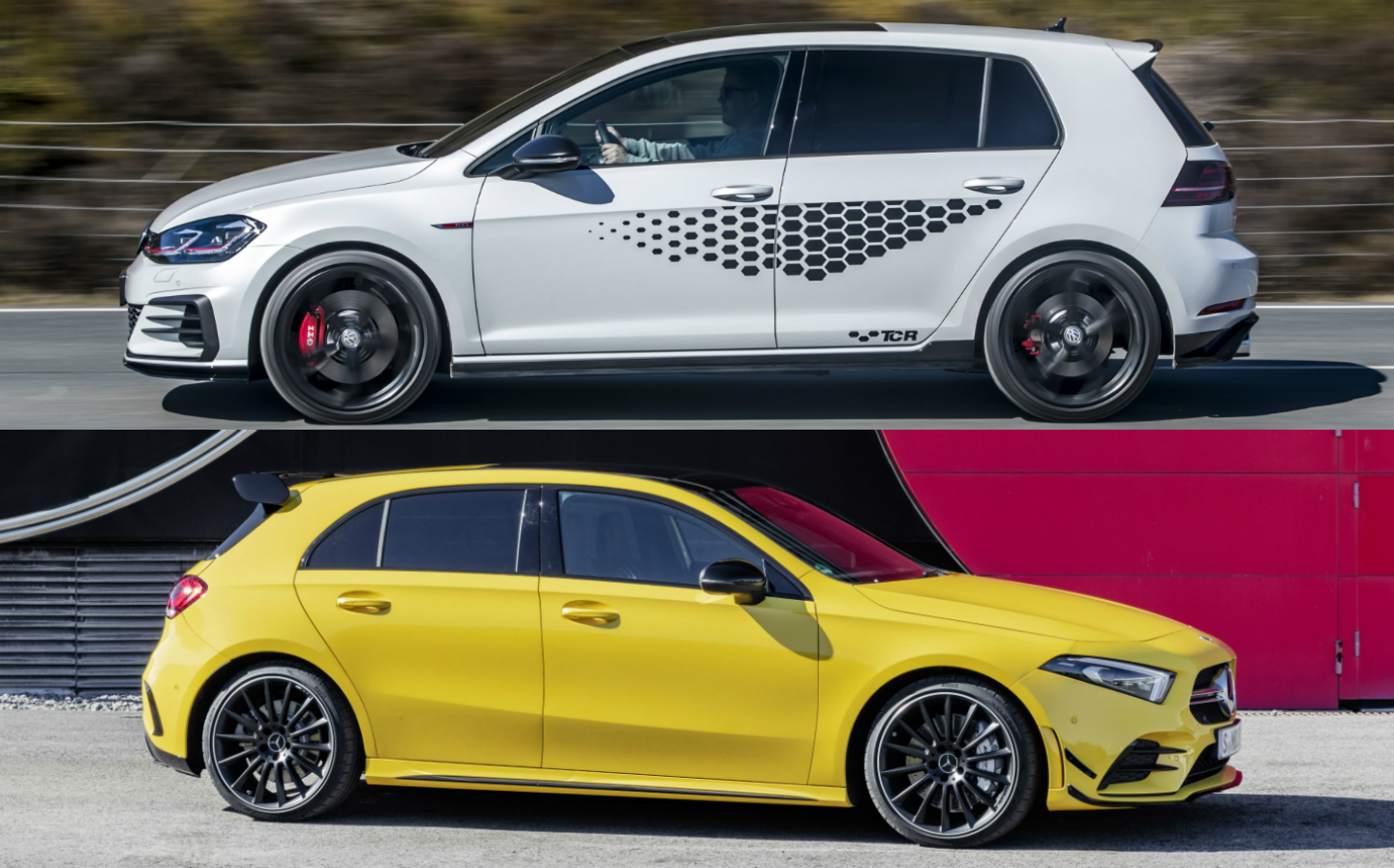 JEREMY CLARKSON has decided to shake things up a bit in his Sunday Times Magazine motoring column this week. Instead of filling the spot with his thoughts on just one car, the writer and presenter has opted to pit two rivals against each other.

While Clarkson has form when it comes to making questionable comparisons in his road tests (you may have seen him examining how a Citroën C3 Aircross fares against an elephant in the third season of The Grand Tour), the controversial critic has found a more realistic rival for the Volkswagen Golf GTI TCR hot hatch: the equally sporty Mercedes-AMG A 35.

As Clarkson points out, the two feisty five-doors are quite similar when you boil them down to base specification. They both cost about the same, with the £35,305 VW being just £585 more affordable than the Mercedes, and the two cars each have 2-litre turbocharged four-cylinder petrol engines paired with seven-speed dual-clutch automatic transmissions.

Even when they start to differ from each other, the two seem to cancel out their advantages.

For example, he says the Golf GTI TCR is the more comfortable car at normal speeds and very fast without feeling raucous or mad. “It just feels sublime,” he concludes.

By comparison, the stiffer setup on the Mercedes means it’s “a mad ride [that’s] full of jolts and judders” when you really start pushing, but the end result is “properly exciting”. In fact, Clarkson says, it’s “up there with the offerings from Renault and Hyundai as a road-going track rocket.”

The Mercedes has the upper hand when it comes to performance, he notes: the A 35’s 302bhp engine is 16bhp more potent than the VW’s, and its 0-62mph time of 4.7 seconds (likely helped by the extra traction from the AMG’s all-wheel drive system) is nearly a second faster that that of the front-wheel drive GTI TCR.

However, while both cars are limited out of the box to 155mph, Golf GTI TCR buyers can pay extra for a Performance Pack that raises its top speed to 164mph. Plus, because the Mercedes is the heavier car, the less punchy Volkswagen actually has the better power-to-weight ratio (200bhp-per-tonne in the Golf, versus 194bhp-per-tonne in the Mercedes).

With the A35 and Golf TCR seemingly locked together in a automotive equivalent of a never-ending rock-paper-scissors game, Clarkson had a really tough time choosing the best hot hatch. But did he settle the score once and for all? You’ll need to Clarkson’s his full review at The Sunday Times website to find out.

Either way, he did seem to enjoy the hot hatch twin-test, saying: “I have to say that it was damn good fun, on the roads near where I live, trying to pick a winner.”

There may be more where that came from, then.

The Mercedes-AMG A35 and Volkswagen Golf GTI TCR have both been nominated in the Best Hot Hatch category in the Sunday Times Motor Awards 2019. Click here to vote for your favourite fast five-door car of the year, and you’ll also be entered into a prize draw to win a holiday.