IT WAS obvious things were not exactly on track when the gravel loomed toward the driver’s window.

Every racing drivers knows that if a car loses control and slides into a gravel trap with its wheels at right angles to the direction of travel, nine times out of ten it will roll over.

There was just time for a choice expletive or two, before the driver’s window shattered, accompanied almost simultaneously by the bursting of all the other windows and the back windscreen.

Then came the violent impacts. Imagine dropping a car from a crane, upside down, with you sat inside, then do it four or five more times.

With each sickening crunch my body was being flung about and I felt the crash helmet strike something. Disorientation set in and all I could think was, this kitty litter stuff feels about as forgiving as concrete.

The sound of metal being crushed in an accident is one of those awful noises that turns your stomach. Like the screams of a child shutting their fingers in a door, it sends a chill down your spine.

Eventually, the spin cycle ended. As I caught my breath, I wondered whether the rescue marshall was particularly short, or kneeling down to talk to me through the now empty passenger window frame.

Neither: the car had eventually landed on top of the crash barrier and tyre wall. He could only just peer over the top to ask if I was okay, before forcefully instructing me not to move.

The look on the faces of the spectators, standing yards from the car’s windscreen, was not encouraging.

I switched off the electrical feed to the car, closed my eyes and thanked the Almighty.

My first accident in motorsport 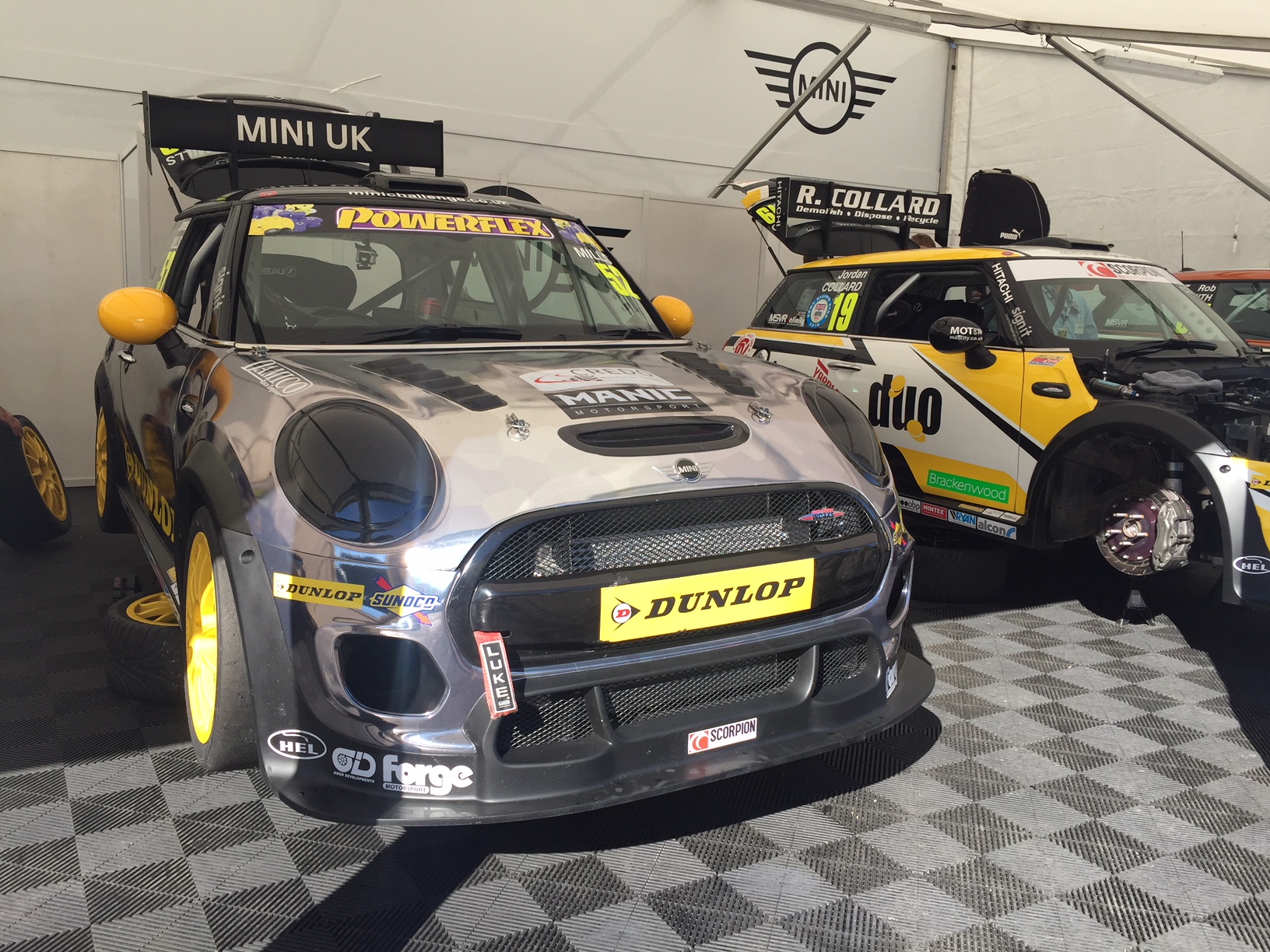 I’d been looking forward to driving in the JCW class of the Mini Challenge. It is reputed to be one of the fastest and most entertaining motorsport championships in the UK, where all the cars are identical and the race result comes down to the skill of the driver.

That’s why it attracts some seriously talented drivers. And it’s where the children of a number of racers from the British Touring Car Championship – including the sons of Matt Neal and Rob Collard – are competing as they hone their race craft and hope to make a name for themselves. 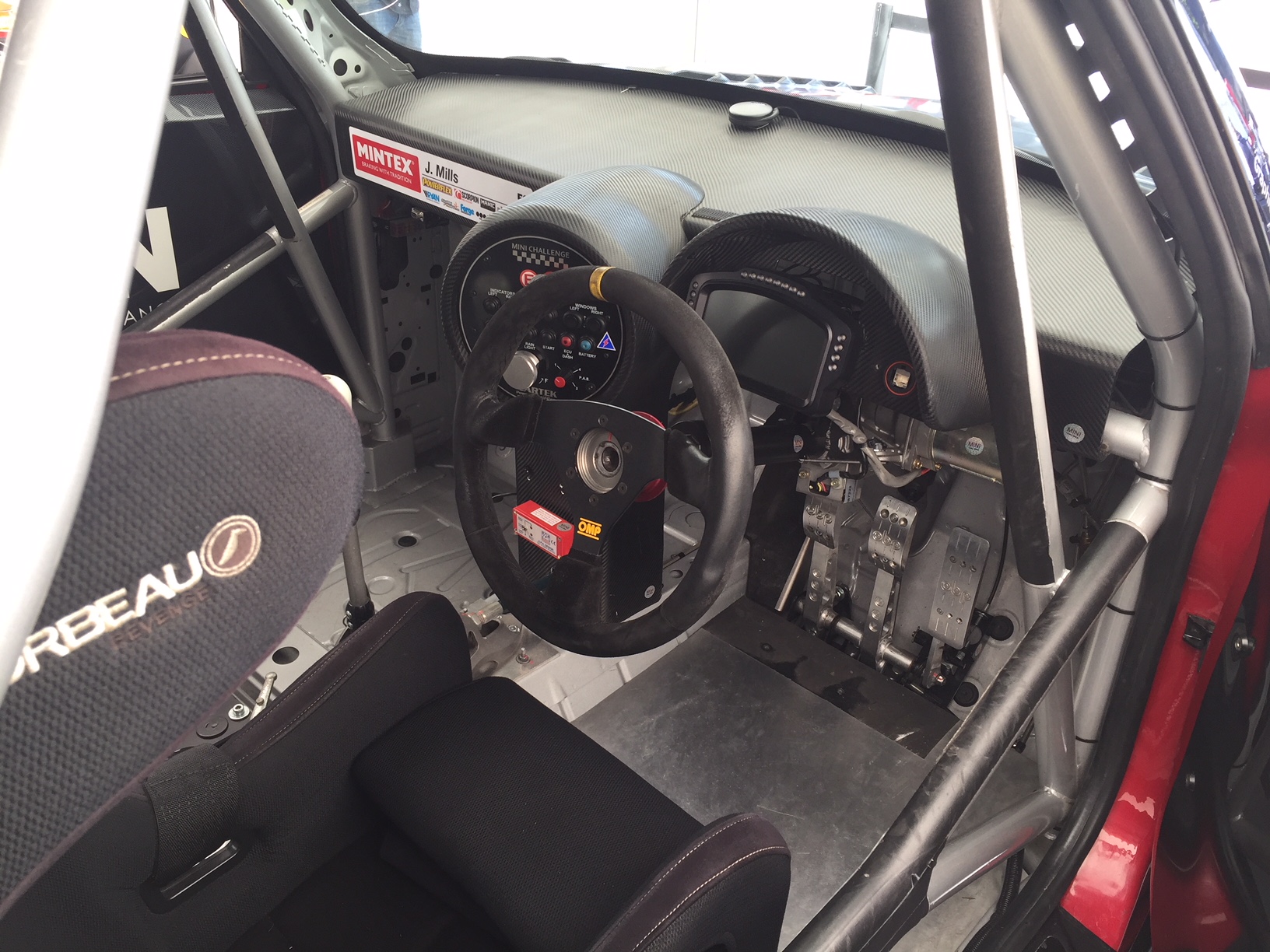 The cars are only loosely based on the Mini John Cooper Works. Other than the bodyshell and the rear brakes, the race car has an altogether more exotic specification.

For example, the suspension uses three-way adjustable Nitron dampers, with adjustable camber front and rear, and there are uprated Alcon brakes at the front to cope with the demands of racing.

The 2-litre, four-cylinder, turbocharged petrol engine boasts 265bhp, and it drives the front wheels through a sequential, six-speed Quaife gearbox and limited-slip differential. The Dunlop tyres are slicks or wets, the dashboard is effectively removed in favour of a simple, digital display from Cosworth, and a Corbeau race seat and harnesses do an excellent job of bracing the driver in place – as I was to find out.

My drive in the Mini JCW Challenge car would be a little more pressured than normal. For starters, there would be no test session. Instead, I’d get just 30 minutes to learn the lines of the challenging Brands Hatch Grand Prix circuit, and get to grips with the car. Not easy given the JCWs, which have a reputation for being as feisty as Joan Rivers with a migraine, and I’d never raced a front-wheel drive car before.

On top of that, the race was part of the support package to the high-profile German Touring Car championship (DTM) which is second only to Formula One in the popularity stakes in Germany.

So off I went. Half an hour to do all that and keep out of the way of the more experienced racers, a handful of who are battling it out for championship victory.

“I was looking forward to returning to the paddock so that I could perform better in qualifying. Then I rather cocked things up”

The crew from the Excelr8 team had told me the car needed at least three laps to get its back tyres warmed through, an important check on the To Do list, or it would try and spin around at any given opportunity.

These quickly passed. So I pressed on and tried to get a feel for the car.

It felt as mad as a box of frogs. Weighing around 1,100kg, and with 265bhp, plus a sequential gearbox and grippy slick tyres, it built speed quickly and held onto it tenaciously through corners, so long as you kept pulling the car through the corner by accelerating almost the moment you began to turn in to the bend.

Lift off that throttle, however, and its tail twitched like a scorpion’s.

On the penultimate lap of the half hour session, I was enjoying myself. I’d gained a feel for reading the car’s behaviour; by watching the pros my racing lines were improving; and my lap times were coming down.

In short, I was looking forward to returning to the paddock and learning as much as possible from comparing my car’s telemetry data with that of the pro drivers, so I could perform better in qualifying. Then I rather cocked things up.

My accident started in the braking area for Paddock Hill Bend. It’s the first, and most famous corner at Brands Hatch. And it has claimed many a victim – literally and metaphorically.

I was just a smidge too late on the brakes. Given I was still finding my way, this wasn’t the first time. But previously, when the tail of the Mini tried to overtake the car’s nose, it was easy to correct with a bit of counter-steering and more drive from the engine.

“I remember thinking, ‘This should look good for the spectators.'”

Not this time… the car didn’t pull straight, first time. By this point, I’m dropping steeply down Paddock Hill. So I added more opposite lock, and more power, and remember thinking, “This should look good for the spectators.”

The next moment, the drifting car’s nearside back wheel clips the kerb and helps it correct itself, but then the Mini spins around to face the opposite direction, and slides into the gravel trap at the outside of Paddock Hill. That’s when the Mini shows what it’s made of.

What saved my life 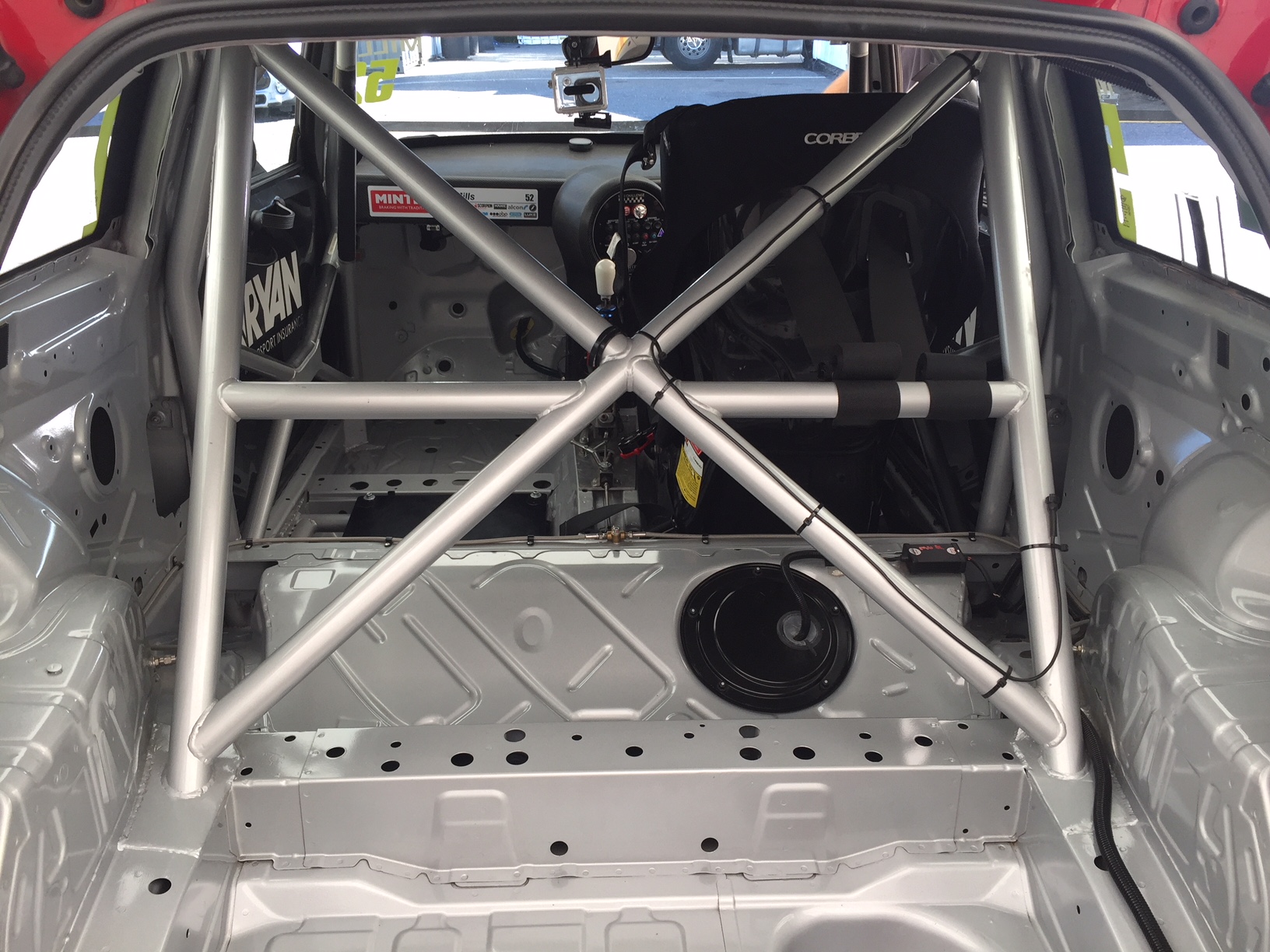 Five or six rolls later, man and machine are balanced on top of the tyre wall. The marshall won’t let me move, so I switch off the battery isolator and thank my lucky stars.

Talking of which, I’d seen a few after the rolling ended.

There is no question that the structural integrity of the Mini JCW racing car is outstanding. And there’s no question that the seat’s wings, around my head, and the HANS device, which a driver wears and attaches to their helmet to limit the strain on their neck and spine in a crash, saved me from a worse fate. Less than two decades ago, I would not have walked away from a smash like this.

Only, I don’t walk away from it. The Dutch and German medical team for the DTM championship are all around me. “Do you have ze neck pain? Is there tingling in any partz of your body? Can you viggle your toes?”

I’m fine, I say. But that counts for nothing. For all anyone knows, I could have sustained a neck injury, so nobody is willing to take a chance.

“Less than two decades ago, I would not have walked away from a smash like this”

They fit a neck brace, cut my seat belts off, attach some sort of hoist, then remove my helmet in a carefully choreographed process that involves two or three pairs of hands and makes me feel like I’m on the set of casualty.

I’m hoisted out, put on a board then moved to a stretcher and whisked away in an ambulance to the Brands Hatch medical centre, where a full examination takes place.

The only sign I’d been involved monster shunt is that glass has worked its way down inside my race suit. Even then, it’s safety glass, so there’s not a nick on me. 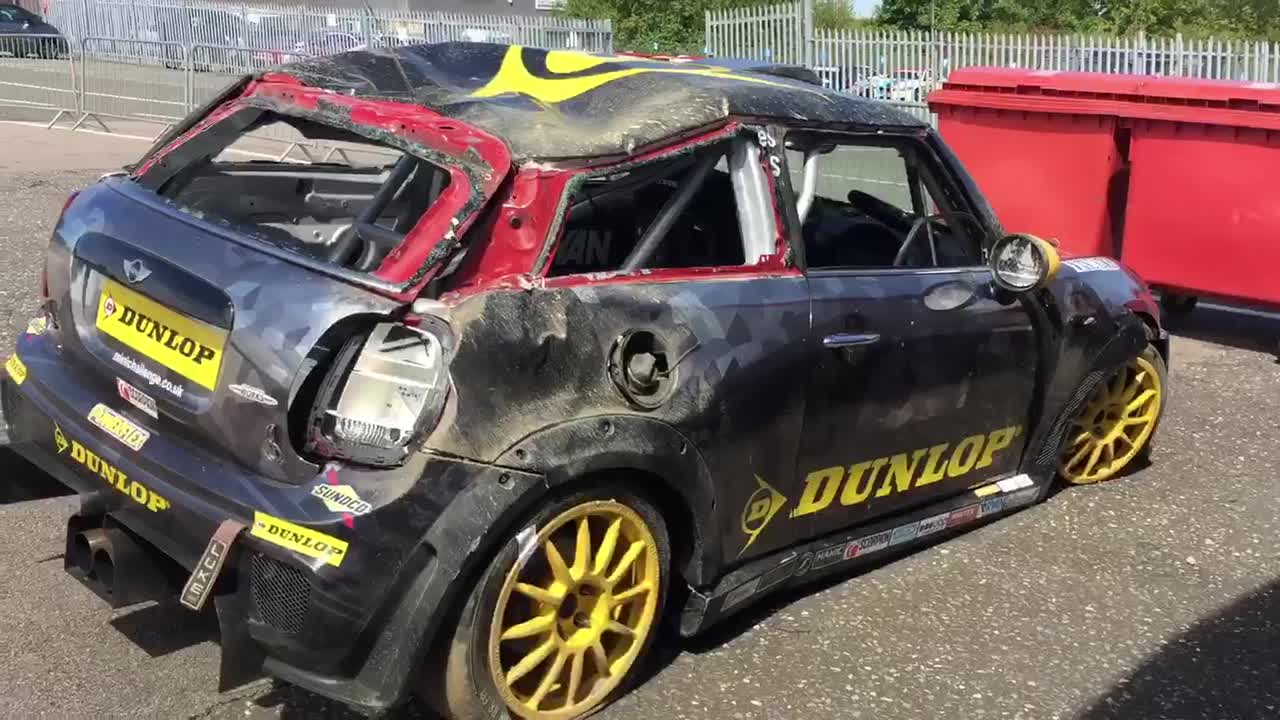 And that’s that. No headache, no bruising, no pain in my neck, back, arms or legs. I’m astonished. And thankful to those that set the rules and build the cars.

I return to Brands Hatch, the next day, and watch the pros hussle their cars around the track, feeling envious.

The crash hasn’t put me off. But whether Mini will ask me back for another race – with a test session, I’d respectfully suggest – is another matter altogether.