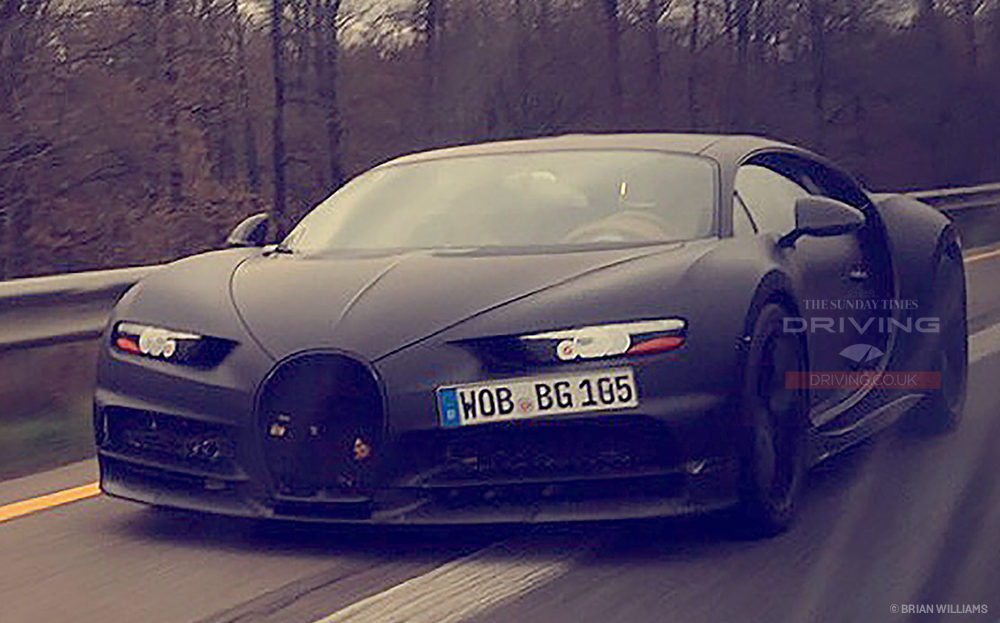 IN BETWEEN designing clothes and accessories for bling-encrusted Monegasques and launching boutiques for Manolo Blahnik-wearing power dressers, Bugatti has found time to attend to the small matter of designing a successor to the world’s fastest car.

View the used Bugatti Veyrons for sale on driving.co.uk

To be called the Chiron, the new hypercar follows in the not inconsiderable tyre tracks of the Veyron. That model’s production ended in February after the last car, a Grand Sport Vitesse named La Finale, was sold to a customer in the Middle East.

The Chiron name has been chosen in memory of Louis Chiron, a successful racing driver who scored numerous grand prix victories for Bugatti in the 1920s and 1930s.

The location for the new Bugatti’s public debut, in March, has been carefully selected. The shores of Lake Geneva are sprinkled with the winter retreats of billionaires; underground car parks house car collections that are as valuable as the art hanging on the walls of the mansions that tower immodestly above ground.

So the Geneva motor show should attract the right crowd to Bugatti’s stand. Those who are too busy or too impatient to wait until then can order one now, and more than 100 buyers have done just that, Bugatti says. Being one of the first drivers in the world to own a Chiron is as much about bragging rights as it is about the driving experience.

Those who have paid a deposit — and pretty much every motoring enthusiast in the world — has had their appetite whetted this week by the emergence of spy shots of the car in pre-production testing (main photo and below).

The car looks more of an evolution of the Veyron than a revolution, and will just as surely divide opinion. Some of the design derives from a concept car that Bugatti revealed at the Frankfurt motor show in September. The Bugatti Vision Gran Turismo looked sensational but, sadly, will only ever be enjoyed by PlayStation owners who play the Gran Turismo driving game.

“We want to make the best significantly better,” said Wolfgang Dürheimer, president of Bugatti, who unsurprisingly claimed the Chiron “will set new standards in every respect”.

He continued: “We will continue to produce the world’s most powerful, fastest, most luxurious and most exclusive production super sports car.”

The final stages of development and testing on public roads and private tracks is under way. Driving shared video footage of the Chiron in May, and rumours suggest that its W16 quad-turbo engine will make even the 1,183bhp Veyron Super Sport — the fastest of all Veyron models — seem as though it’s not firing on all cylinders.

As much as 1,479bhp is being hinted at by those involved in the car’s development, and Martin Winterkorn, the former head of the Volkswagen Group (which owns Bugatti), has previously said that it will have a hybrid powertrain.

Although the four-wheel-drive Chiron’s power output, performance and top speed remain a closely guarded secret, the likelihood is that it will be capable of getting from standstill to 60mph in 2.3 seconds and travelling at 288mph — four times faster than the British national speed limit.

Quite where owners will be able to try this for themselves remains unclear. In 2010, James May drove the Veyron Super Sport to 259mph, which is 9mph short of its claimed top speed, despite having a private VW test track and a 5½-mile straight at his disposal.

The Chiron will be built at Bugatti’s factory in Molsheim, northwest France. It is throught that its exclusivity will be ensured by restricting production to fewer than 500 cars.

As for the price, expect it to be as stomach-churning as the car’s performance — somewhere around £1.5m.