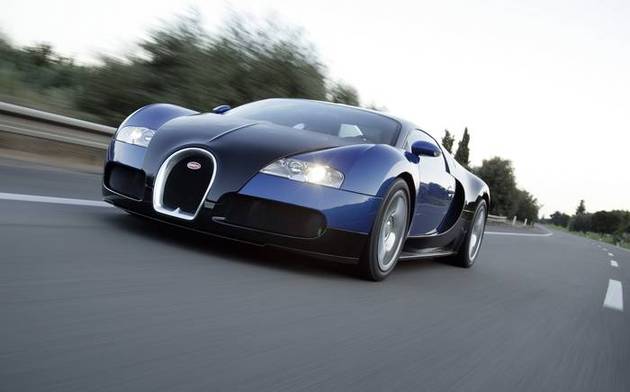 WHEN YOU push a car past 180mph, the world starts to get awfully fizzy and a little bit frightening. When you go past 200mph it actually becomes blurred.

Almost as though you’re trapped in an early Queen pop video. At this sort of speed the tyres and the suspension are reacting to events that happened some time ago, and they have not finished reacting before they’re being asked to do something else.

The result is a terrifying vibration that rattles your optical nerves, causing double vision. This is not good when you’re covering 300ft a second.

Happily, stopping distances become irrelevant because you won’t see the obstacle in the first place. By the time you know it was there, you’ll have gone through the windscreen, through the Pearly Gates and halfway across God’s breakfast table.

It has always been thus. When Louis Rigolly broke the 100mph barrier in his Gobron-Brillié in 1904, the vibration would have been terrifying. And I dare say that driving an E-type at 150mph in 1966 must have been a bit sporty as well.

But once you go past 200mph it isn’t just the suspension and the tyres you have to worry about. The biggest problem is the air. At 100mph it’s relaxed. At 150mph it’s a breeze. At 200mph it has sufficient power to lift a 350-ton jumbo jet off the ground. A 200mph gust of wind is strong enough to knock down an entire city. So getting a car to behave itself in conditions such as these is tough.

At 200mph you can feel the front of the car getting light as it starts to lift. As a result you start to lose your steering, so you aren’t even able to steer round whatever it is you can’t see because of the vibrations. Make no mistake: 200mph is at the limit of what man can do right now. Which is why the new Bugatti Veyron is worthy of some industrial-strength genuflection. Because it can do 253.8mph. And that’s just mad — 253.8mph means that in straight and level flight this car is nearly as fast as a Hawker Hurricane.

You might point out at this juncture that the McLaren F1 could top 240mph, but at that speed it was pretty much out of control. And anyway it really isn’t in the same league as the Bugatti. In a drag race you could let the McLaren get to 120mph before setting off in the Veyron. And you’d still get to 200mph first. The Bugatti is way, way faster than anything else the roads have seen.

Of course, at £810,000, it is also jolly expensive, but when you look at the history of its development you’ll discover it’s rather more than just a car …

It all started when Ferdinand Piëch, the swivel-eyed former boss of Volkswagen, bought Bugatti and had someone design a concept car. “This,” he said, “is what the next Bugatti will look like.” And then, without consulting anyone, he went on.

“And it vill have an engine that develops 1,000 horsepower and it vill be capable of 400kph.”

His engineers were horrified. But they set to work anyway, mating two Audi V8s to create an 8-litre W16. Which was then garnished with four turbochargers. Needless to say, the end result produced about as much power as the Earth’s core, which is fine.

But somehow the giant had to be cooled, which is why the Veyron has no engine cover and why it has 10 — count them —10 radiators. Then things got tricky because the power had to be harnessed.

For this, VW went to Ricardo, a British company that makes gearboxes for various Formula One teams.

“God, it was hard,” said one of the engineers I know vaguely. “The gearbox in an F1 car only has to last a few hours. Volkswagen wanted the Veyron’s to last 10 or 20 years. And remember, the Bugatti is a damn sight more powerful than any F1 car.”

The result, a seven-speed double-clutch flappy-paddle affair, took a team of 50 engineers five years to perfect.

With this done, the Veyron was shipped to Sauber’s F1 wind tunnel, where it quickly became apparent that while the magic 1,000hp figure had been achieved — in metric terms if not bhp — the team was miles off the target top speed of 400kph (248mph). The body of the car just wasn’t aerodynamic enough, and Volkswagen wouldn’t let the engineers change the basic shape to get round the problem.

The bods at Sauber threw up their hands, saying they had experience of aerodynamics only up to maybe 360kph, which is the top speed in F1.

Beyond this point Bugatti was on its own.

Somehow the company had to find an extra 30kph, and there was no point in looking to the engine for answers because each extra 1kph increase in speed requires an extra 8bhp from the power plant. An extra 30kph, then, would need an extra 240bhp. That was not possible.

The extra speed had to come from changing small things on the body. The team started by fitting smaller door mirrors, which upped the top speed a bit but at too high a price. It turned out that the bigger ones had been keeping the nose of the car on the ground. Without them the stability was gone.

In other words, the door mirrors were generating downforce. That gives you an idea of how much of a problem the air can be at this speed.

After some public failures, fires and accidents, and one chief being sacked, Bugatti hit on the idea of a car that automatically changes shape, depending on what speed you’re going.

At 137mph the nose of the car is lowered by 2in and the big rear spoiler slides into the slipstream. The effect is profound. You can feel the back of the car being pressed into the road.

However, with the spoiler in place the drag is so great that you’re limited to just 231mph. To go faster than that you have to stop and insert your ignition key into a slot on the floor. This lowers the whole car still further and locks the big back wing down. Now you have reduced downforce, which means you won’t be going round any corners, but you have a clean shape. And that means you can top 400kph.

You might want to ponder that for a moment. Covering the length of a football pitch, in a second, in a car. And then you might want to think about the braking system. A VW Polo will generate 0.6g if you stamp on the middle pedal hard. You get that from the air brake alone on a Veyron. Factor in the carbon ceramic discs and you will pull up from 250mph in just 10 seconds. Sounds good, but in those 10 seconds you’ll have covered a third of a mile.

I didn’t care. On a recent drive across Europe I desperately wanted to reach the top speed but I ran out of road when the needle hit 240mph. Where, astonishingly, it felt planted. Totally and utterly rock steady. It felt sublime.

And then I reached the Alps, where, unbelievably, it got better. I expected this road rocket to be absolutely useless in the bends, but it felt like a big Lotus Elise.

Occasionally, if I accelerated hard in a tight corner, it behaved strangely, as the four-wheel-drive system decided which axle would be best equipped to deal with the wave of power. I won’t say it’s a nasty feel or dangerous. Just weird, in the same way as the duck-billed platypus is weird.

You learn to raise an eyebrow at what’s only a foible, and then, as the road straightens out, steady yourself for Prince Albert’s boiler to gird its loins and play havoc with the space-time continuum. No, really, you come round a bend, see what appears to be miles and miles of dead straight road and bury your foot in the carpet, and, with a big asthmatic wheeze, bang, you’re instantly at the next bend, with your eyebrow raised again.

From behind the wheel of a Veyron, France is the size of a small coconut. I cannot tell you how fast I crossed it the other day. Because you simply wouldn’t believe me. I also cannot tell you how good this car is. I don’t have the vocabulary. I just end up stammering and dribbling and talking wide-eyed nonsense. 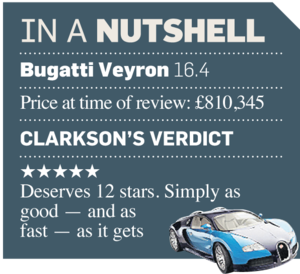 This car cannot be judged in the same way as we judge other cars. It meets drive-by noise and emissions regulations and it can be driven by someone whose only qualification is an ability to reverse round corners and do an emergency stop. So technically it is a car. And yet it just isn’t.

Other cars are small guesthouses on the front at Brighton and the Bugatti is the Burj al-Arab. It makes even the Enzo and the Porsche Carrera GT feel slow and pointless. It is a triumph for lunacy over common sense, a triumph for man over nature and a triumph for Volkswagen over absolutely every other car maker in the world.