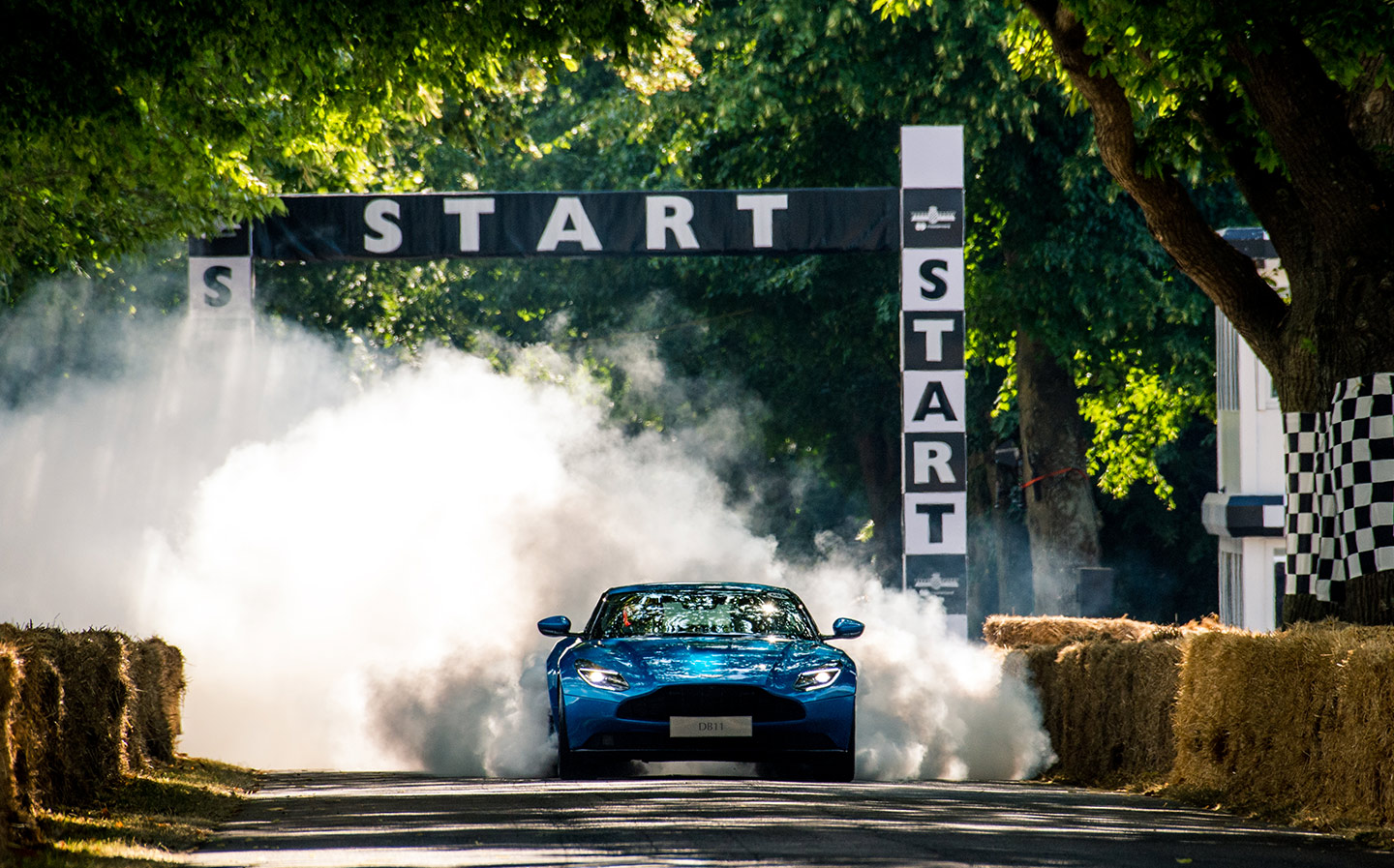 The Goodwood Festival of Speed is one of the biggest events on the UK’s motoring calendar and this year runs across the weekend of June 23-26.

Over the past couple of years, the festival has seen some disruption due to the coronavirus pandemic, but last year FoS came back with a bang with a jam-packed event (though with slightly restricted attendee numbers) that included appearances from the McLaren duo of F1 drivers Lando Norris and Daniel Ricciardo, as well as Alex Albon driving a Red Bull F1 car.

The event also saw the UK debut of new cars from Alfa Romeo, BMW, Maserati and Pininfarina, underlining how the FoS has evolved into the de facto British motor show.

What’s the theme of the 2022 Festival of Speed?

The theme of the 2022 festival is “The Innovators: Motorsport’s Greatest Minds”, celebrating the biggest brains in motorsport — names such as Owen Maddock, Frank Costin and Adrian Newey who, though known by motorsport fans, don’t get nearly the same share of the limelight as the drivers.

The owner of the Goodwood estate and host of the Festival of Speed, the Duke of Richmond said:

“Just as race-inspired innovations such as four-valve engines, monocoque chassis and turbocharging have shaped the past and present of the cars we drive in the real world, so electrification, autonomy and other new technologies — the development of which is accelerated by the white heat of competition — will have a profound effect on the future of personal mobility.”

Drivng.co.uk came up with our own list of who we think are the greatest minds in motorsport.

What are the highlights of this year’s festival?

The Hillclimb is, as ever, a must-see as it’s a chance to watch everything from F1 and Nascar to Formula E and classic touring cars being driven in anger.

The Supercar Paddock, adjacent to the starting line of the Hill, is also an opportunity to get up close and personal with plenty of expensive and exotic machinery.

Providing another chance to see loud cars doing what they do best is the Forest Rally Stage featuring modern and classic rally cars shattering the woodland tranquillity.

For something a little more sedate, Sunday’s Cartier Style et Luxe is a concours event showcasing some of the rarest and best-presented classics around.

All the action notwithstanding, for many, the highlight of the festival is always the celebrity spotting, with attendees practically guaranteed to spot a racing driver, TV presenter or other celebrity petrolhead, the prime location for this being the Main Paddock area.

What cars will be there?

The FoS is nothing if not diverse when it comes to the selection of vehicles in attendance, whether that’s on static display or running on the Hill, rally stage or drift course. The Festival has just announced this year’s provisional list of cars, though bear in mind that if you have your heart set on seeing something specific, the line-up may be subject to change right up until the weekend itself.

For starters, there’ll be a host of old F1 cars from the eighties and nineties in the Grand Prix Greats category including the Williams FW14B, McLaren MP4/5 and MP4/25, Renault RS10, Shadow DN9, Jordan 191 and more. For those in search of something a little (or a lot) older, there’ll be Grand Prix racers from Mercedes, Spyker, Sunbeam and others dating back to the beginning of the 20th century, as well as a line-up of Alfa Romeo, Bentley and Aston Martin racers from the twenties and thirties.

Fans of sports car and endurance racing are in for a treat with a category celebrating 40 years of Group C, which will include Le Mans classics from the eighties and nineties including the Jaguar XJR-15, Porsche 956, Sauber C9 and Nissan NPT 90. These will be joined by some of the latest Le Mans racers as well as cars from further back such as the terrifying Porsche 917K, beautiful Alfa Romeo Tipo 33 Periscopica and successful Jaguar C- and D-Types.

Touring cars, both from the BTCC and DTM championships, also feature heavily, including the formidable Zakspeed Ford Capri, fearsome versions of nineties rep-mobiles such as the Vauxhall Vectra, Volvo S40, Ford Mondeo and Nissan Primera, the Calsonic Nissan Skyline GT-R and up-to-date touring cars from Hyundai and Ford.

There’ll be rally cars galore too running through the woods from sixties Mini Coopers right through the Group B era of Lancia Deltas, Audi Quattros and MG Metro 6R4s, on through the victorious Subaru Impreza and Ford Focus cars of the nineties and early 2000s right up to the latest Dakar endurance rally machines including Toyota’s 2022 Hilux.

There are just too many cars (and bikes) to list here, with loads of other categories including Can-Am racers, Formula E, Extreme E and drift cars. We’d be remiss, however, not to mention the 75 Years of Ferrari section featuring 250 GTOs, early cars from the forties and fifties, old F1 and endurance racers and some of the company’s current models.

Though there will be five F1 teams in attendance at this year’s festival, it hasn’t been confirmed yet which of the current crop of drivers will be coming. Other well-known attendees though are set to include Mark Webber, Nigel Mansell, Mika Häkkinen, Jenson Button, Jackie Stewart, Damon Hill, Jacky Ickx, Tom Kristensen… the list goes on.

Which is the best day to go to the Festival of Speed?

Sunday has the Shootout — the culmination of the hill climb action — making it extremely popular, and Saturday and Sunday tend to see the biggest number of celebrity appearances. However, Saturday also has a full schedule of hill climb action as well as a number of other motor sport events, while Friday sees Formula One cars take to the hill as well as new car debuts. In short, it’s hard to say, though, at the time of writing only tickets for Thursday and Friday remain available.

How much are tickets to the Festival of Speed?

Children under 12 are admitted free, but as for adult tickets, Thursday’s start from £47 and the limited number of remaining tickets for Friday start from £66.

Where is the Goodwood Festival of Speed?

The Festival of Speed takes place at the picturesque and quintessentially British Goodwood Estate in West Sussex, which is owned by the Duke of Richmond, who founded FoS in June 1993. The grounds are located just outside Chichester — 60 miles from London and 30 miles from Brighton and Southampton.

There are regular trains from London Victoria to Chichester that take between 40 minutes and an hour. If you’re driving, you’ll park in a large field before walking to the event. Parking is free, but you cannot leave your car in any of Goodwood’s car parks overnight.

What are the festival’s opening times?

Gates usually open at 7am before proceedings start from 8.30. It’s a long day full of countless automotive delights that concludes at 6pm. Be prepared for long queues when leaving the venue.

How can you watch the Festival of Speed online and on TV?

The Festival of Speed has been broadcast on ITV since it began in 1993, and this year looks to be no different with some of the most popular segments set to be on television. But thanks to fast internet and streaming services, one of the best ways to watch in recent years is via the Goodwood website and the event’s YouTube channel.