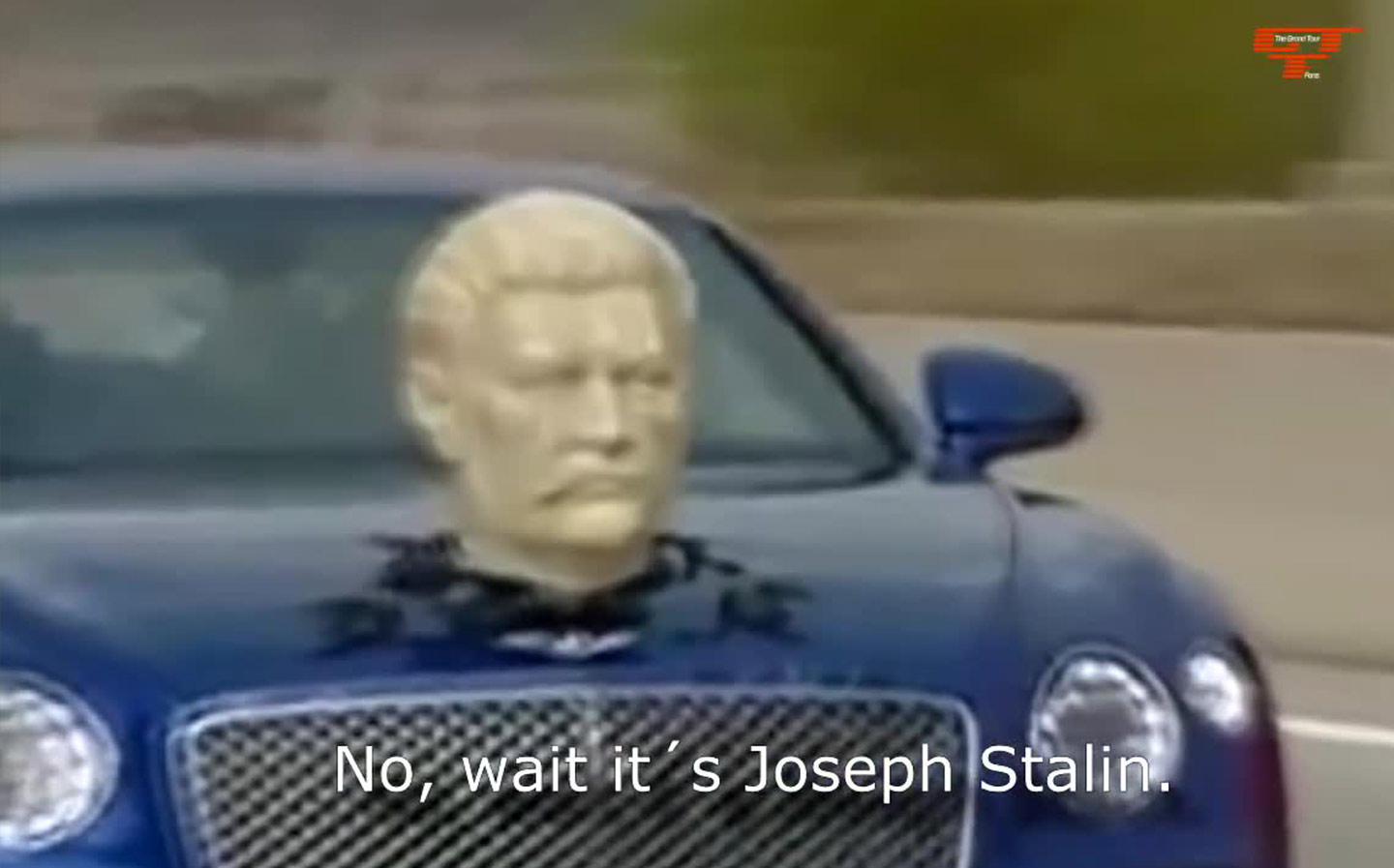 JEREMY Clarkson, James May and Richard Hammond are showing no signs of toning down their antics on the new series of The Grand Tour, after being spotted driving through Georgia with a bust of Joseph Stalin mounted to the bonnet of a Bentley.

The three Amazon Prime Video presenters are in the former Soviet country filming one of their trademark challenges, in which they travel cross-country in three different cars performing tasks set by the show’s producer.

The host’s vehicles are often modified by their rivals without their knowledge, or embarrassing or bulky gifts are bought with the intention of hampering their colleagues’ progress during the challenge.

The addition of the Stalin bust on the Bentley Continental GT, which is thought to be piloted by Hammond or May, could be just such a move. The other two drivers are behind the wheel of an Aston Martin DBS and BMW M850i for the Georgia challenge.

Georgia was defeated by the Red Army in 1921 and was incorporated into the Transcaucasian Socialist Federative Soviet Republic, which in 1922 became the Soviet Union. It declared its independence from the USSR in 1991, shortly before the collapse of the Union.

Joseph Stalin was an ethnic Georgian who ruled the Soviet Union from 1922 until his death, in 1953. He remains one of the most notorious figures in history, with nearly 800,000 documented executions to his name, as well as over 1.5m deaths of those detained in the Gulag and many more millions estimated to have died as a result of famine under his regime. He is also accused of crimes including ethnic cleansing.

Despite this, Stalin has retained popularity in some parts of Russia and Georgia for his role in defeating the Nazis and establishing the Soviet Union as a major world power.

There’s only one explanation to this mess – @JeremyClarkson travels in Georgia! pic.twitter.com/Eqa11xsa3A

According to The Grand Tour Fans YouTube account, which is following the programme’s progress and posted the video, the presenters visited the house in which Stalin was born, in Gori, as well as the Stalin Museum, which according to the Independent still worships the Communist dictator.

The Grand Tour team then travelled inland to Tbilisi, the capital of Georgia, where they were spotted at Dry Bridge Market. They are expected to conclude their journey in Azerbaijan, which was also a founding member of the Soviet Union.

It goes without saying that this isn’t the first time the trio have caused controversy on foreign soil, with the most hair-raising being the time the cast and crew were forced to flee Argentina fearing for their lives, after it was noticed the Porsche driven by Clarkson had the numberplate H982 FKL — seen as a reference to the Falklands invasion of 1982.

Series three of The Grand Tour is due to air from next month. Insiders believe Amazon is keen to continue the show beyond season three, as it is their most successful show in terms of cost versus new subscribers, but there is no news on a fourth series yet. After a third, full-throttle series, the team may want to take a little break.

Jeremy Clarkson commissioned for full series of Who Wants to be a Millionaire? in 2019