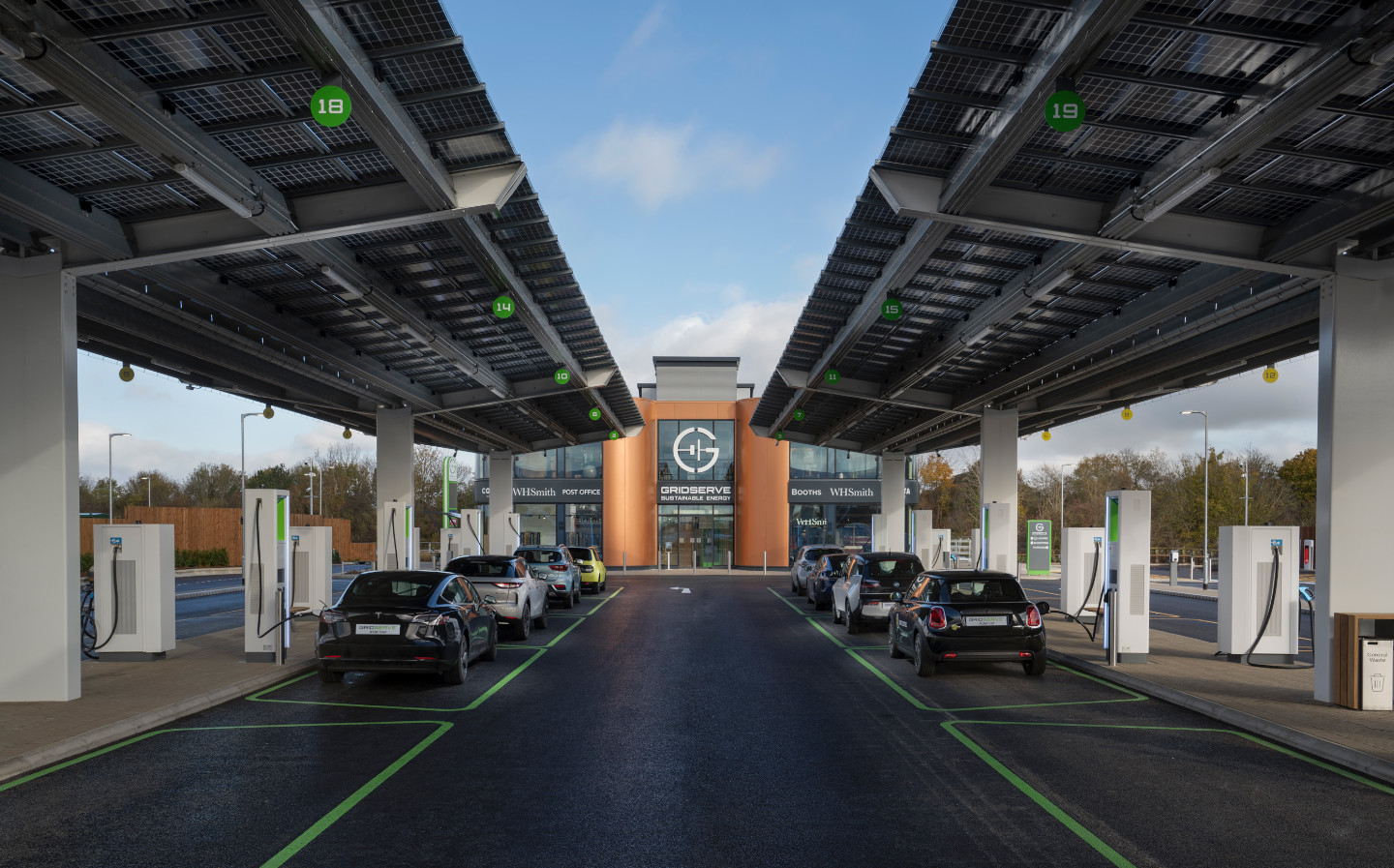 Charging times vary depending on the model of car, though the operator claims it can take as little as 20 minutes to add 200 miles of range to the latest electric cars.

In order to provide customers with ample entertainment while their cars are plugged in, the site features a WHSmith shop, Costa Coffee,  private meeting booths, Post Office, kids area, free superfast WiFi and a “wellbeing area” with stationary bikes that generate electricity when pedalled.

In order to encourage the uptake of electric vehicles, screens around the complex advertise electric car models. Sales of pure-electric vehicles in the UK are small as a proportion of the market, though the numbers are increasing rapidly — so far this year more than 86,000 registrations, representing a 5.8% share of the total, which is up from 33,000 for the same period in 2019 (1.5%).

That’s against an overall drop in sales of cars of nearly 31% in 2020, due to the closure of showrooms during the pandemic.  The UK government has committed to ending the sale of new petrol and diesel cars by 2030, with hybrids following in 2035, though drivers will not be forced to scrap their old cars and sales to used cars with internal combustion engines will be allowed to continue.

The plan is designed to cut vehicle emissions, which are harmful to the environment and health. Even so, a survey has suggested that more than half of car buyers disagree with the move.

The Braintree facility will initially charge 24p per kWh of electricity, regardless of which charger you use, which is above most home energy rates but not as pricey as some other rapid charging stations in the UK. A full charge of Nissan Leaf with a usable battery capacity of 36kWh would cost £8.64, allowing up to 168 miles of zero emission motoring.

Gridserve, which operates the forecourt, plans to implement a tiered pricing structure in the future. 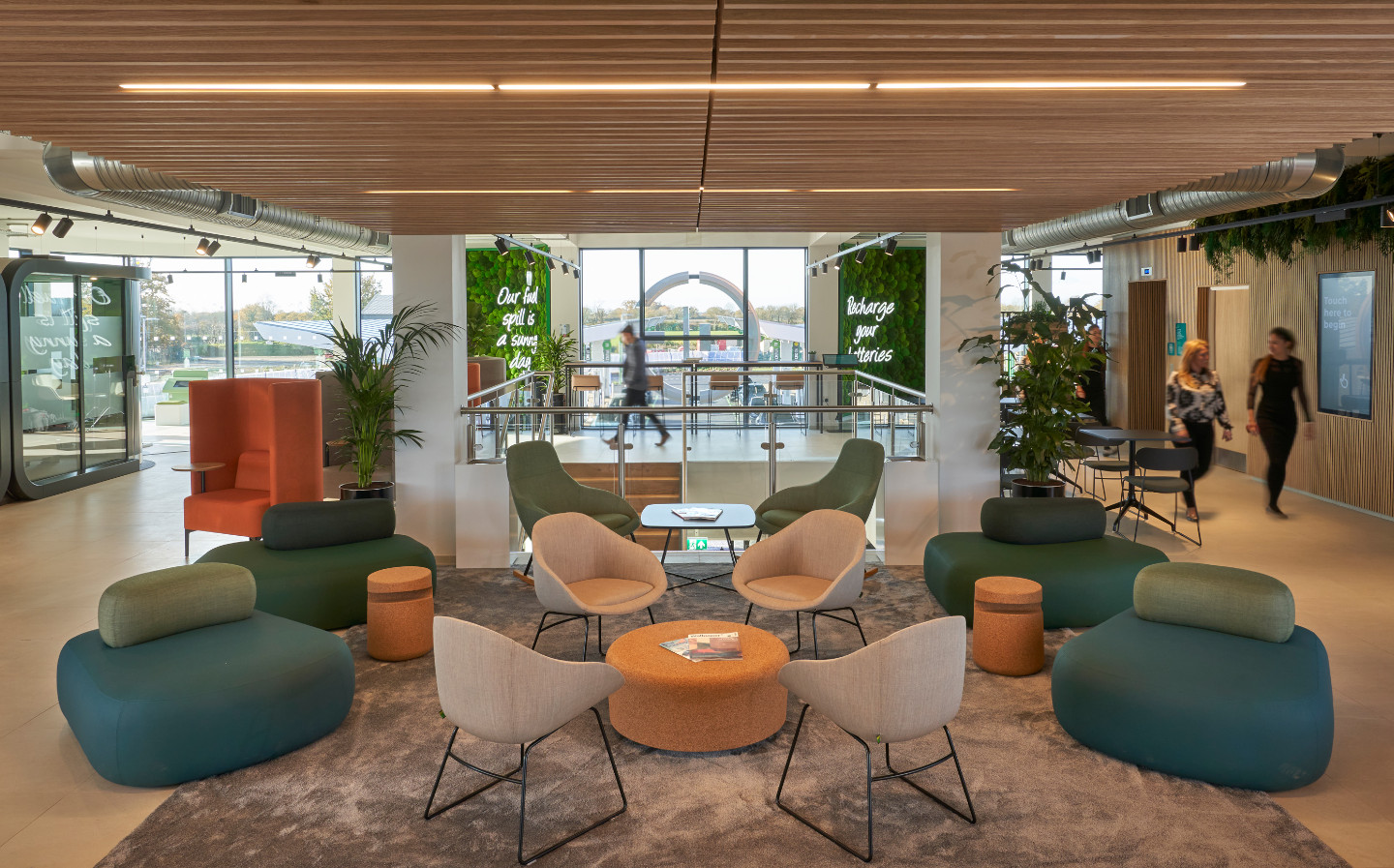 “However, charging has to be simple and free of anxiety, which is why we’ve designed our Electric Forecourts entirely around the needs of drivers, updating the traditional petrol station model for a net-zero carbon world and delivering the confidence people need to make the switch to electric transport today – a full decade ahead of the 2030 ban on petrol and diesel cars.”

Gridserve plans to open 100 sites similar to the one in Braintree over the next five years. Forecourts in Uckfield, Sussex and Norwich are due to open for business at the beginning of next year.

The Essex location is paired with a subsidy-free solar farm in Flitwick, Bedfordshire, that supplies it with renewable energy via the National Grid. All chargers have overhead solar canopies that generate extra electricity, and the site has a 6MWh (6,000kWh) battery that helps to stabilise the load and maintain low costs.

James Cleverly, MP for Braintree and former Conservative Party Chairman said: “Our government is committed to increasing the take-up of electric vehicles, to clean our air and enable us to achieve net zero carbon emissions as quickly as possible, which is why we have just brought forward the ban on new petrol or diesel to 2030.

“Gridserve’s Electric Forecourt, close to Braintree, is the most advanced charging facility in the world and is pioneering the world-class infrastructure required to support our policies and drive the confidence we need to make the move to sustainable transport in the UK.”

The government has signed into law its intention to make the UK a carbon-neutral nation by 2050, and is leaning heavily on the uptake of electric cars in order to achieve this ambition. It currently provides a £3,000 subsidy on the price of electric cars costing less than £50,000.

After reading about Britain’s first all-electric forecourt opening in Essex, you might be interested in the details of the 2030 ban on new petrol and diesel cars.