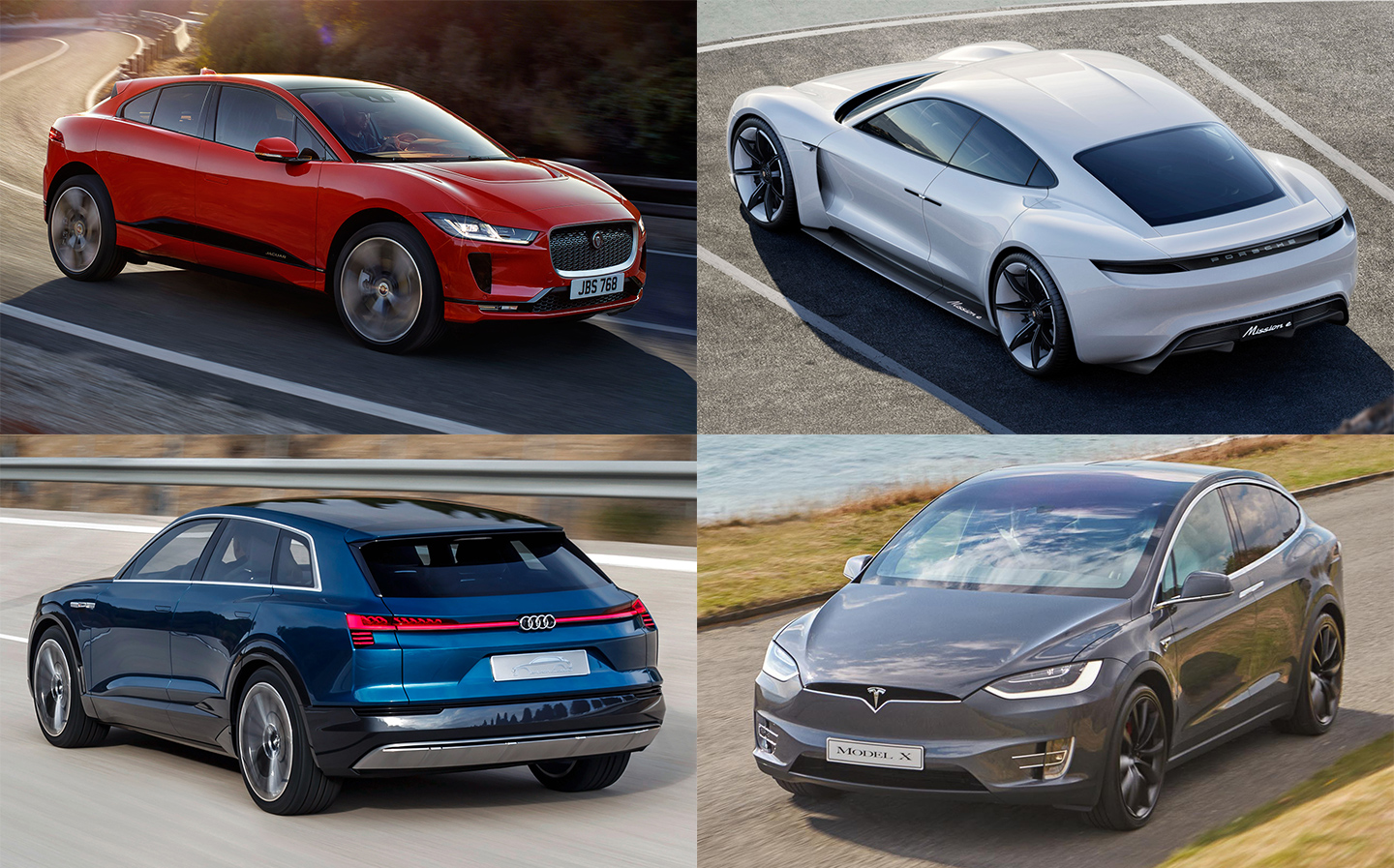 ELECTRIC CARS are not only increasing in number but they’re going upmarket. Gone are the days when drivers would have to make do with a humble Nissan Leaf or pint-sized Renault Zoe and worry what the neighbours might think. A new wave of battery-powered luxury models are arriving in Britain’s car showrooms, with the likes of Audi, Jaguar and Porsche joining Tesla in the battle to woo owners of posh cars who are contemplating ditching diesel or parting company with petrol.

California’s Tesla may have led the charge of the upmarket electric car, launching its Model S saloon in 2013, but Britain’s Jaguar has managed to get the head-start on its European rivals, beating them to the market with its recently launched I-Pace – reviewed in full here.

Audi will reveal the production version of its e-tron SUV at the end of August, which is likely to appeal to both Q5 and Q7 owners. And Porsche is in the race as it readies the Taycan, its first pure electric car that’s about the size of the Panamera.

All promise a driving range of between 250 and 300 miles, impressive performance and a host of innovative technology – such as apps that will allow owners to operate functional systems on their car from afar. However, they won’t come cheap. In this part of the car market, the cost of sharing in the electric dream starts at about £60,000 and rises to around £75,000.

For those willing to take a leap of faith, the obvious question is how do the new luxury electric cars compare? Here, we review the specifications of the Audi e-tron, Jaguar I-Pace, Porsche Taycan and Tesla Model X, to help drivers decide which best meets their needs.

Arguably the greatest concern for any driver that’s not owned an electric car before is how far it will travel on a fully charged battery. Distances are improving from earlier, less powerful electric cars like the Nissan Leaf, which would struggle to better 100 miles on a charge, but there’s still the anxiety of running out of battery juice in between charging points when driving an electric-only car.

The figures provided by manufacturers are based on European test procedures, procedures which are currently undergoing change from the New European Driving Cycle (NEDC) to the Worldwide Harmonised Light Vehicle Test Procedure (WLTP). The latter is hoped to give consumers a more accurate indication of a car’s range, as it has been designed to be more reflective of day to day driving conditions.

Even so, it is important that drivers bear in mind that, as with claimed fuel economy figures provided for petrol or diesel cars, the range claims made for any electric car are optimistic and should be viewed as a best-case scenario for those times when someone is minded to drive like a saint.

With a range of 298 miles, the Jaguar I-Pace can handle driving from London to Cornwall on a charge

Tesla’s Model X, an eye-catching SUV crossed with a people carrier that has back doors which lift to the skies like a bird’s wings, stole the march on all the cars in this price range, going on sale in mid-2016. The 75D version, which costs a shade under £75,000, offers a potential driving range of 259 miles on the NEDC scale. It’s possible to upgrade the battery – and pay more than £91,000 – to a 100kWh version, which raises the touring distance to a possible 351 miles.

The Jaguar I-Pace allows for long roadtrips, such as driving from London to Cornwall, as well as longer daily commutes, with a claimed single charge range of 298 miles, using the WLTP measurement.

Audi is accepting deposits from UK customers for its new e-tron SUV, which will be revealed in showroom specification at the end of August. The German car manufacturer claims it offers a driving range of 248 miles, based on the WLTP.

Porsche is talking up the performance of its Taycan, and using the NEDC method says that the new sports saloon will achieve 310 miles of driving range before the battery needs topping up with charge.

After range anxiety, the next headache for anyone new to electric cars is how long a battery takes to charge. It’s all good being able to travel 300 miles on a single charge, but if you forget or face a long journey it’s good to know how quickly a depleted battery can be replenished at a public charging point, or at work.

Depending on what you’re using to top up the batteries, the charging times will vary considerably. For example, when plugging the car into the regular mains household supply, Jaguar only reckons you’ll get 38 miles of range out of the I-Pace if you leave it charging overnight. That’s why most owners have a 7kW wallbox installed at home or at work, as it will give a full charge overnight, or in 13 hours.

Jaguar says that at a standard charging point at a service station its I-Pace should have 168 miles or so of range after an hour’s charge. Once 100kW-capable charging points are available in the UK, it should also be possible to top up the battery to 90% capacity within 45 minutes.

Tesla’s Model X 75D takes about 11 hours to charge at home with a 7kW wallbox, and 3.5 hours with a public 22kW rapid charger. Switch to a 120kW Supercharger and within 40 minutes it should have 80% charge.

Audi told Driving that the e-tron will offer 150kW DC charging capability. That means it should charge from empty to 80% in around half an hour, and reach full within 50 minutes, as and when such powerful charges become publicly available – something the company is working on in partnership with BMW, Mercedes, Ford and the rest of the Volkswagen Group, under the guise of the Ionity network. Charged at home, using an 11kW wallbox, and it will take around 8.5 hours for a complete fill.

Porsche has yet to provide comprehensive charging data for the Taycan, saying only that it has the ability to provide a range of 248 miles after 15 minutes. However, as with the Jaguar, the technology that would allow this isn’t yet available in the UK.

Whereas charge times and ranges can vary on circumstances, there are no such fluctuations and variables when it comes to flat-out, impress-the-passengers, acceleration. And in that respect, electric cars should deliver quite a kick, as the torque – or pulling power – of the electric motors is available from zero revs.

Being a newer car from a manufacturer with 70 years’ experience of making performance vehicles, Porsche unsurprisingly has the most powerful on-paper vehicle here. According to its maker, the Taycan’s pair of electric motors will be able to generate a combined output of 591bhp, as well as an “enormous” torque figure that Porsche is shy about declaring for the moment. Whatever it is, it’s enough to propel this all-electric four-seater sports car to 62mph from a standstill in just 3.5 seconds.

The Jaguar I-Pace is admittedly slower in comparison, but that doesn’t mean the svelte Jag is out of shape and best kept on the reserves bench. A power figure of 395bhp is still plenty of poke regardless of the car you’re driving, and there’s plenty of pulling power to call upon courtesy of the 512lb ft of torque. All in all, it’s enough for a 0-62mph time of 4.5 seconds and a top speed of 124mph.

Tesla’s Model X 75D is just behind the I-Pace in the acceleration stakes, taking 4.9 seconds to hit 62mph. Its top speed is 130mph, and the Californian car maker says the motors produce 328bhp and 387Ib ft of torque. If you were to splash out on the P100D, it can scoot from 0-62mph in just 2.9 seconds.

The imminent Audi e-tron musters 402bhp from its pair of electric motors, but the company hasn’t yet revealed the torque output. As for its speed, Audi quotes a 0-62mph time of ‘under six seconds’ and a maximum of 124mph.

Because the Audi and Porsche are not yet on sale, the final price for UK drivers is still to be announced. However, the companies have given guidance on the anticipated cost, with the Audi e-tron likely to start from £60,000 when it is revealed in showroom trim in September, and the Porsche Taycan expected to be around £70,000 – when it finally reaches showrooms early next year.

All four cars qualify for the government’s plug-in car grant for zero-emission vehicles, which is worth upto 35% of the price or a maximum of £4500, and would be deducted from the prices listed above.