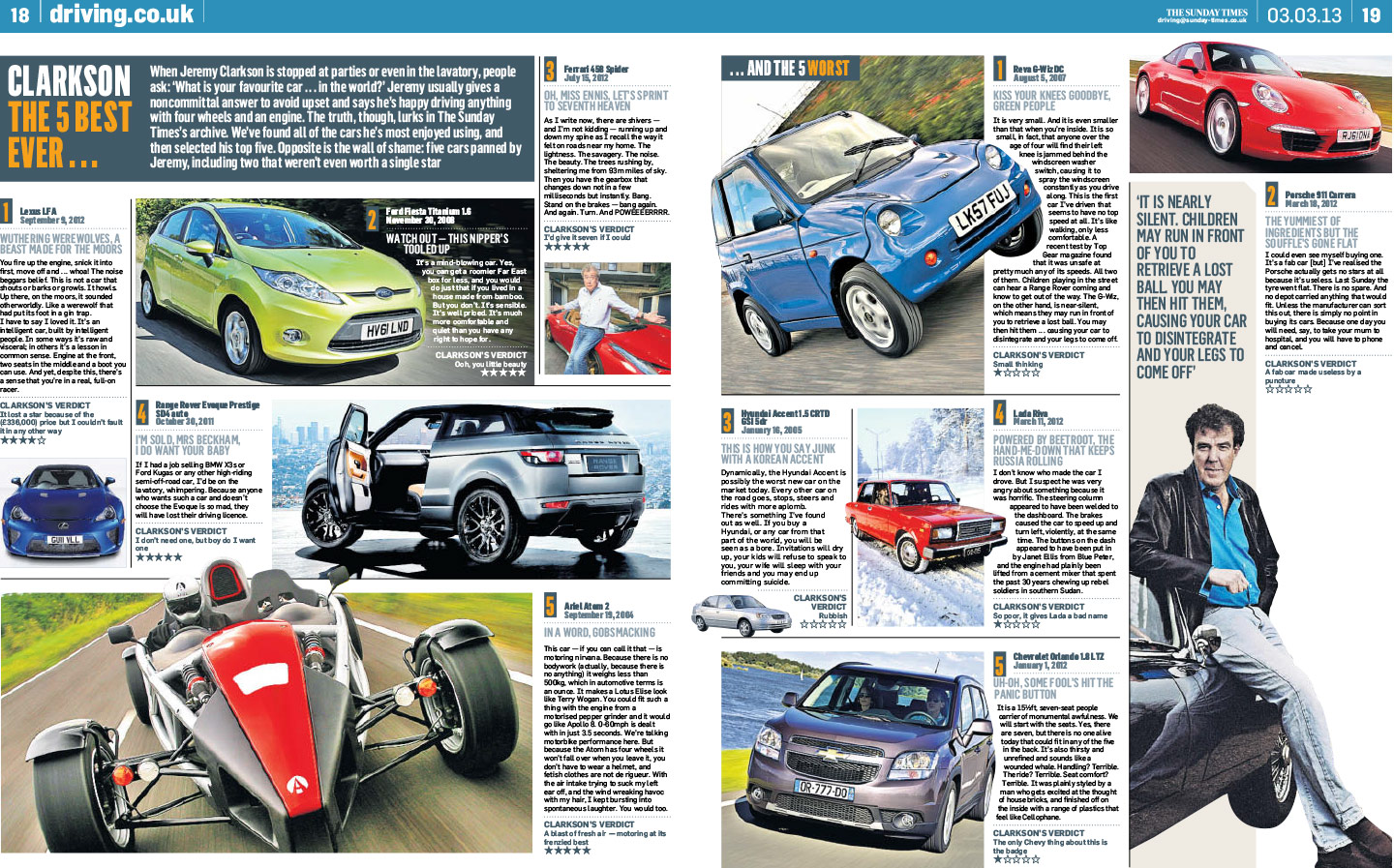 WHEN JEREMY Clarkson is stopped at parties or even in the lavatory, people ask: ‘What is your favourite car … in the world?’ Jeremy usually gives a noncommittal answer to avoid upset and says he’s happy driving anything with four wheels and an engine.

The truth, though, lurks in The Sunday Times’s archive. We’ve found all of the cars he’s most enjoyed using, and then selected his top five. Opposite is the wall of shame: five cars panned by Jeremy, including two that weren’t even worth a single star

The best five cars ever…

Wuthering werewolves, a beast made for the moors

You fire up the engine, snick it into first, move off and … whoa! The noise beggars belief. This is not a car that shouts or barks or growls. It howls. Up there, on the moors, it sounded otherworldly. Like a werewolf that had put its foot in a gin trap.

I have to say I loved it. It’s an intelligent car, built by intelligent people. In some ways it’s raw and visceral; in others it’s a lesson in common sense. Engine at the front, two seats in the middle and a boot you can use. And yet, despite this, there’s a sense that you’re in a real, full-on racer.

Read the review at thesundaytimes.co.uk

Watch out — this nipper’s tooled up

It’s a mind-blowing car. Yes, you can get a roomier Far East box for less, and you would do just that if you lived in a house made from bamboo. But you don’t. It’s sensible. It’s well priced. It’s much more comfortable and quiet than you have any right to hope for.

As I write now, there are shivers — and I’m not kidding — running up and down my spine as I recall the way it felt on roads near my home. The lightness. The savagery. The noise. The beauty. The trees rushing by, sheltering me from 93m miles of sky. Then you have the gearbox that changes down not in a few milliseconds but instantly. Bang. Stand on the brakes — bang again. And again. Turn. And POWEEEERRRR.

I’d give it seven if I could

I’m sold, Mrs Beckham, I do want your baby

If I had a job selling BMW X3s or Ford Kugas or any other high-riding semi-off-road car, I’d be on the lavatory, whimpering. Because anyone who wants such a car and doesn’t choose the Evoque is so mad, they will have lost their driving licence.

I don’t need one, but boy do I want one

In a word, gobsmacking

This car — if you can call it that — is motoring nirvana. Because there is no bodywork (actually, because there is no anything) it weighs less than 500kg, which in automotive terms is an ounce. It makes a Lotus Elise look like Terry Wogan. You could fit such a thing with the engine from a motorised pepper grinder and it would go like Apollo 8. 0-60mph is dealt with in just 3.5 seconds. We’re talking motorbike performance here. But because the Atom has four wheels it won’t fall over when you leave it, you don’t have to wear a helmet, and fetish clothes are not de rigueur.

With the engine air intake trying to suck my left ear off, and the wind wreaking havoc with my hair, I kept bursting into spontaneous laughter. You would too.

A blast of fresh air — motoring at its frenzied best

…and the five worst

It is very small. And it is even smaller than that when you’re inside. It is so small, in fact, that anyone over the age of four will find their left knee is jammed behind the windscreen washer switch, causing it to spray the windscreen constantly as you drive along. This is the first car I’ve driven that seems to have no top speed at all. It’s like walking, only less comfortable. A recent test by Top Gear magazine found that it was unsafe at pretty much any of its speeds. All two of them. Children playing in the street can hear a Range Rover coming and know to get out of the way. The G-Wiz, on the other hand, is near-silent, which means they may run in front of you to retrieve a lost ball. You may then hit them … causing your car to disintegrate and your legs to come off.

The yummiest of ingredients but the souffle’s gone flat

I could even see myself buying one. It’s a fab car [but] I’ve realised the Porsche actually gets no stars at all because it’s useless. Last Sunday the tyre went flat. There is no spare. And no depot carried anything that would fit. Unless the manufacturer can sort this out, there is simply no point in buying its cars. Because one day you will need, say, to take your mum to hospital, and you will have to phone and cancel.

A fab car made useless by a puncture

This is how you say junk with a Korean accent

Dynamically, the Hyundai Accent is possibly the worst new car on the market today. Every other car on the road goes, stops, steers and rides with more aplomb. There’s something I’ve found out as well. If you buy a Hyundai, or any car from that part of the world, you will be seen as a bore. Invitations will dry up, your kids will refuse to speak to you, your wife will sleep with your friends and you may end up committing suicide.

Powered by beetroot, the hand-me-down that keeps Russia rolling

I don’t know who made the car I drove. But I suspect he was very angry about something because it was horrific. The steering column appeared to have been welded to the dashboard. The brakes caused the car to speed up and turn left, violently, at the same time. The buttons on the dash appeared to have been put in by Janet Ellis from Blue Peter, and the engine had plainly been lifted from a cement mixer that spent the past 30 years chewing up rebel soldiers in southern Sudan.

So poor, it gives Lada a bad name

It is a 15½ft, seven-seat people carrier of monumental awfulness. We will start with the seats. Yes, there are seven, but there is no one alive today that could fit in any of the five in the back. It’s also thirsty and unrefined and sounds like a wounded whale. Handling? Terrible. The ride? Terrible. Seat comfort? Terrible. It was plainly styled by a man who gets excited at the thought of house bricks, and finished off on the inside with a range of plastics that feel like Cellophane.

The only Chevy thing about this is the badge