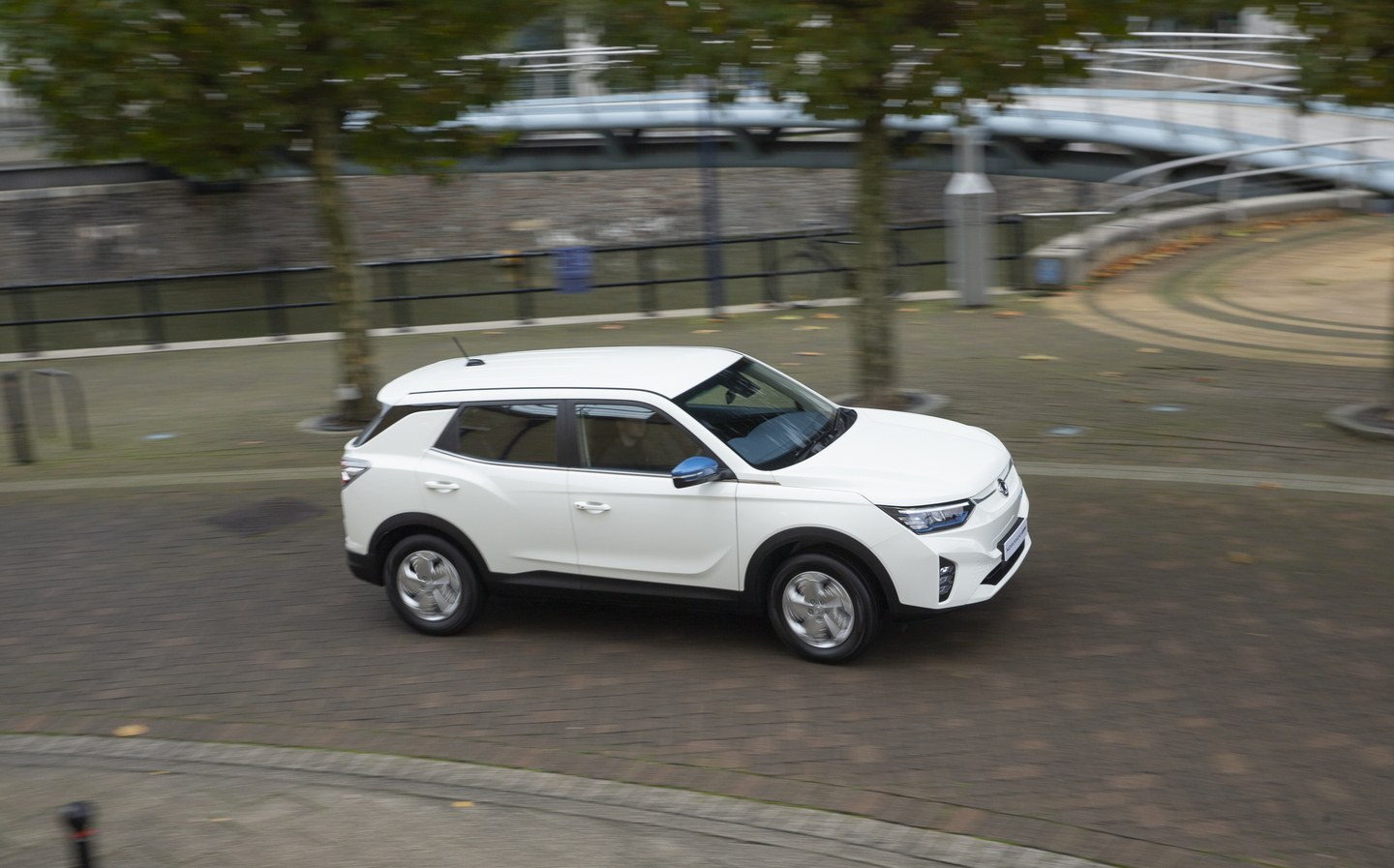 SSANGYONG is beginning to find its feet in the competitive UK car market. Five or six years ago, the South Korean company made some clunky 4x4s with cheap plastics and other manufacturers’ cast-off engines, but the tide has turned. The Rexton is a capable and well-equipped 4×4, the Musso is a solid workhorse of a pick-up truck and the Korando is a commendable family SUV.

Now the range is expanding with the addition of an electric Korando, which SsangYong has cunningly called the e-Motion. Based on the solid foundations of its petrol- and diesel-powered stablemates, the Korando e-Motion is here to compete with cheaper electric SUVs such as the MG ZS EV, and steal sales away from more established models such as the Kia e-Niro and Peugeot e-2008.

But while the e-Motion is set to cost a similar amount to its peers, it offers far more space inside. Even more surprisingly, it also provides a similar amount of refinement and much the same level of interior quality as some more premium rivals.

Although essentially much the same as the average petrol- or diesel-engined Korando, the e-Motion does have one or two features that differentiate it from the standard car. Chief among these is the redesigned front end, where SsangYong has done away with the normal Korando’s grille in favour of a smoother and more aerodynamic design.

It isn’t the prettiest nose in the world, but it helps the car cut through the air more easily. The same goes for the 17in aerodynamic alloy wheels, which won’t win many prizes for aesthetics, but are designed to reduce the car’s drag through the air.

But by far the worst thing about the e-Motion is SsangYong’s decision to put blue trim pretty much everywhere. It’s all over the door mirrors and the rear bumper, and it only succeeds in making the car look as though the dealer never took the protective wrapping off when the car was delivered. It’s cheap and nasty and we suspect it may put off some otherwise interested customers.

While this blue trim does single out the Korando as the electric model in the range, rivals such as the Kia e-Niro have done this more skilfully, with small flashes of blue on the bumpers and a faired-in grille. The MG ZS EV might be a budget choice, but it’s one of the best-looking of all, with only the smooth grille to suggest it isn’t a combustion-powered vehicle.

All that aside, the Korando is not an ugly car in any form. It’s a little boxy and perhaps it doesn’t have the class or polish of some more established rivals, but it’s as easy on the eye as any other budget family SUV. Nonetheless, it is a little bulkier than its competitors, measuring 4,465mm in length – a full four inches longer than a Kia e-Niro or MG ZS.

Because of that extra length, the Korando is roomier than most of its competitors, offering bags of rear legroom and ample headroom. It’s more than capable of carrying four six-foot adults in comfort, and that isn’t always the case in compact electric SUVs. Sure, you can fit four adults in a Peugeot e-2008, but there isn’t that much room to stretch out. The Korando offers that additional breathing space.

Fitting three adults across the back seats of the Korando will still be a squeeze, however, and few will want to occupy the middle seat for any great length of time. That said, the space in the back of the e-Motion will be a real boon for families, with less chance of toddlers kicking their parents seat backs and fewer opportunities for arguments with siblings.

And it doesn’t come at the cost of boot space, either. The 551-litre luggage bay in the back of the Korando is up there with the best family SUVs on the market, and it grows to more than 1,200 litres when the back seats are folded.

But there’s more to practicality than outright space. The Korando also endears with its height, which means getting in and out is very easy. There’s no worrying about clambering in or dragging yourself out – just slide across into the seat and away you go.

Once you’re in the driver’s seat, the cabin feels as roomy as the stats suggest, with plenty of shoulder room and big windows. That isn’t always the case in cars with dark interior materials and thick rear pillars, but the Korando doesn’t feel claustrophobic at all.

SsangYong hasn’t finalised the e-Motion specifications yet, so there’s no solid information on the safety and convenience equipment fitted. However, the carmaker has indicated that safety features, such as autonomous emergency braking that can stop the car if the driver fails to respond to a hazard, will likely be available across the range.

Our test car, which was a strange, pre-production mixture of different trim levels, came with other goodies including lane-keeping assistance that steers the car back into its lane and an attention warning system to let drivers know if they’ve lost concentration. Adaptive cruise control was also fitted, allowing the car to automatically maintain a safe distance to the vehicle ahead.

On the more exciting entertainment side, our e-Motion was also equipped with a highly configurable and easy-to-read digital instrument display, as well as a touchscreen infotainment system with navigation and the Android Auto and Apple CarPlay smartphone integration technology. The screen also houses the reversing camera display, which makes life much easier when parking – particularly because the thick rear pillars limit visibility somewhat.

The touchscreen proves functional, if not exactly cutting edge. The graphics might leave something to be desired, but the screen resolution is good, and the menus are generally logical, if occasionally slightly fiddly. But it does the job, and it’s better than some of the screens used in more established models at present.

Other welcome additions to our test car included heated seats, ‘keyless’ access and push-button start, as well as two-zone climate control that allows the driver and passenger to set different temperatures. Wireless phone charging is a neat touch, too.

Although the Korando e-Motion will be offered in a selection of trim levels, SsangYong is only offering one electric motor. It produces 188bhp and it’s fed by a 61.5kWh lithium-ion battery, which lives under the floor., with all the power going to the front wheels.

Although only around 55kWh is available to use, the official economy test suggests a range of 211 miles, which puts it in the bottom half of the electric SUV pack. The Kia e-Niro and MG ZS EV have larger batteries that offer more range, but the Korando still offers greater distance than the Peugeot e-2008. And smaller batteries equal less weight and a cost saving for consumers.

Like all electric cars, the e-Motion is at its most efficient in urban traffic, and that’s where it really belongs. That said, our test drive took place in the depths of winter on a mixture of town centre streets, country roads and fast A-roads, yet it still suggested a real-world range of 200 miles would not be too fanciful.

As well as being efficient, the motor also offers plenty of acceleration. The 0-60mph time of nine seconds might seem relatively unremarkable on paper but it feels quick, particularly around town. Like other electric cars, the torque – all 265lb ft of it – is delivered instantly and that means the Korando sets off with surprising alacrity. On a greasy road, it’ll even spin the front wheels.

Electric cars are at their best when you can charge at home, and the Korando is no different. Filling up the battery from empty will take around 11 hours from a 7kW domestic ‘wallbox’ charger, which should satisfy those wanting to fill up overnight. Drivers in a hurry, however, can charge the battery from 20- to 80% in about half an hour if they use a 100kW rapid charger.

No matter which engine is fitted, the Korando has made its name as a no-nonsense family SUV that doesn’t chase performance or handling accolades, and the e-Motion is no different. From the moment you set off, the overriding sense is one of refinement, rather than speed or dynamism.

SsangYong has worked hard to make the car as quiet as possible, and it shows. There’s very little wind noise, the motor is practically silent, and the insulated cabin keeps most of the tyre roar at bay. There’s never any need to raise your voice, and most of the time you could converse with passengers in whispers.

The sensation of refinement is only magnified by the suspension, which can smooth off most of the bumps and goes about its business quietly. SsangYongs generally have a reputation for being at home off-road, so you can expect it to deal with bumpy tracks well at low speed, but the Korando is only available as a 4×4 in diesel form — the eMotion is strictly two-wheel drive.

That said, really uneven road surfaces seem to catch the car out slightly, with the wheels hitting the second bump before the springs have finished dealing with the first. It also rides with a heaviness that has become common among electric cars, with the heavy battery pack causing the e-Motion to sag into the largest potholes.

There’s no real attempt to offer any kind of sportiness, with light steering that’s great in town but short on feel at more ambitious speeds. And though the suspension provides decent body control, the e-Motion is still very much designed for comfort rather than speed.

That said, it does have a sporty driving mode that provides greater access to the electric motor’s might, but most drivers will prefer the more languid power delivery – and greater range – that comes with the more efficiency-orientated settings.

Drivers might be more divided when it comes to the three levels of energy recuperation on offer. Some will prefer the first setting, which allows the car to coast to a halt when the accelerator is lifted, while others will prefer the third level, which is offers more aggressive deceleration, as the electric motor is turned into a generator, but still doesn’t come close to the ‘one-pedal’ operation offered by some electric cars. The most efficient option is to mix and match, selecting the appropriate level of recuperation from the paddles behind the steering wheel.

The Korando e-Motion is set to go on sale later this year but SsangYong has not yet confirmed how much it will cost. Nor has the South Korean manufacturer announced what will come as standard. However, we expect the cheapest models to come in at around £30,000.

The slight lack of range means the Korando e-Motion will not go straight to the top of the class, but it’s a worthy rival for other budget electric cars, and that is a real step forward for a brand such as SsangYong.

It may not be particularly outstanding in any one area, but the e-Motion scores solidly across the board. Assuming the price is as low as expected, the e-Motion will make a spacious, refined and wallet-friendly family runabout that’s perfect for the school run or commuting – an ideal second car.