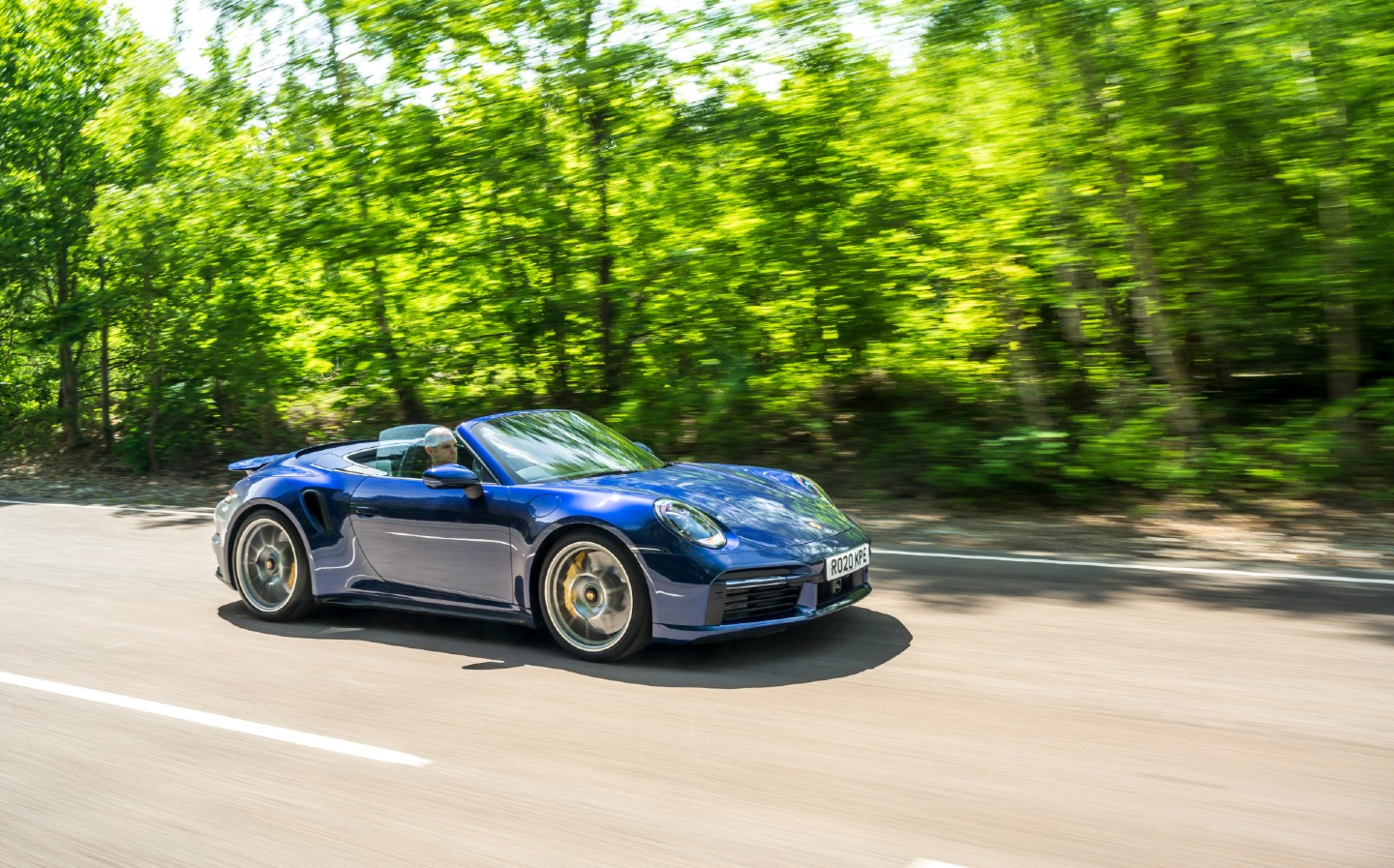 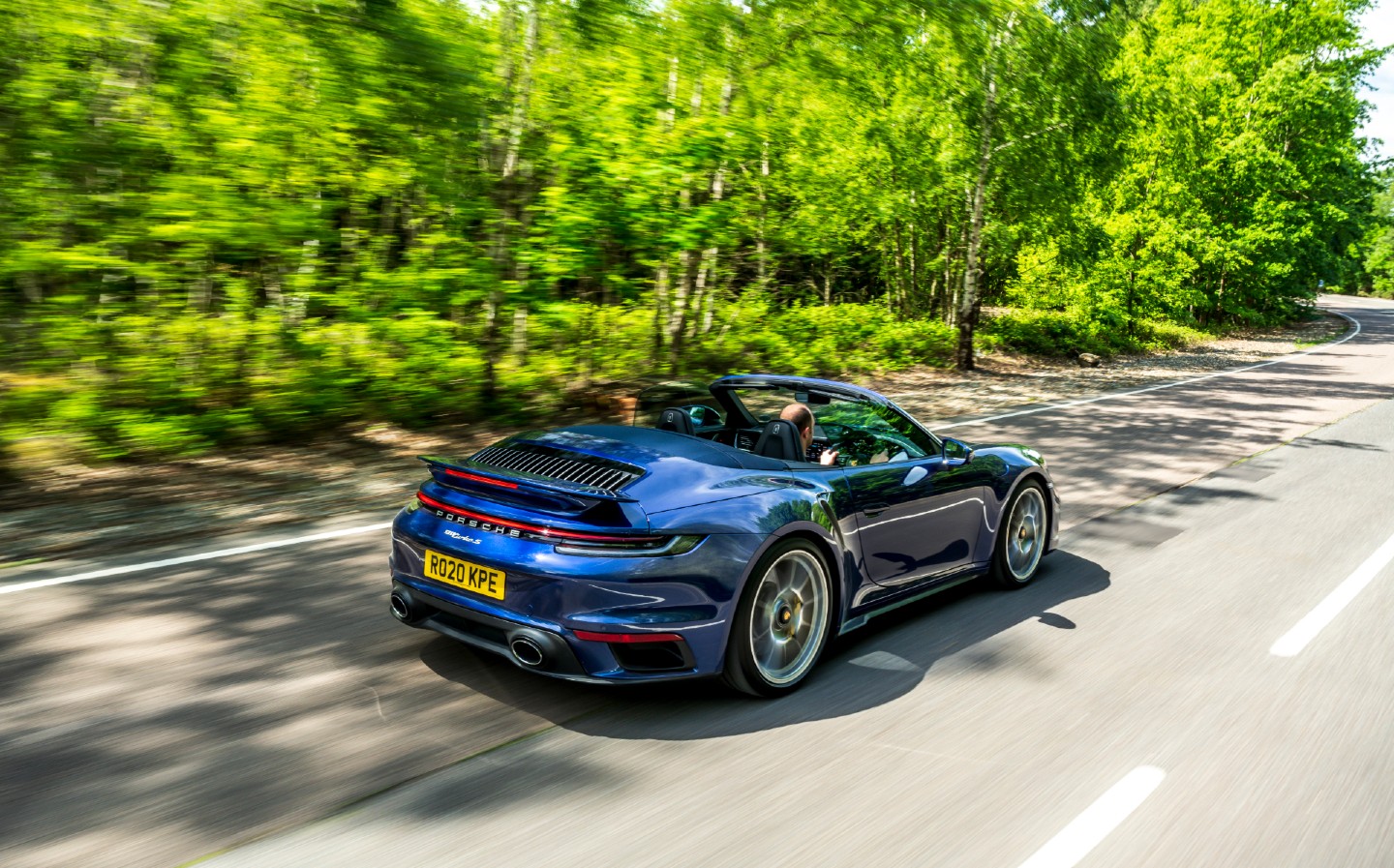 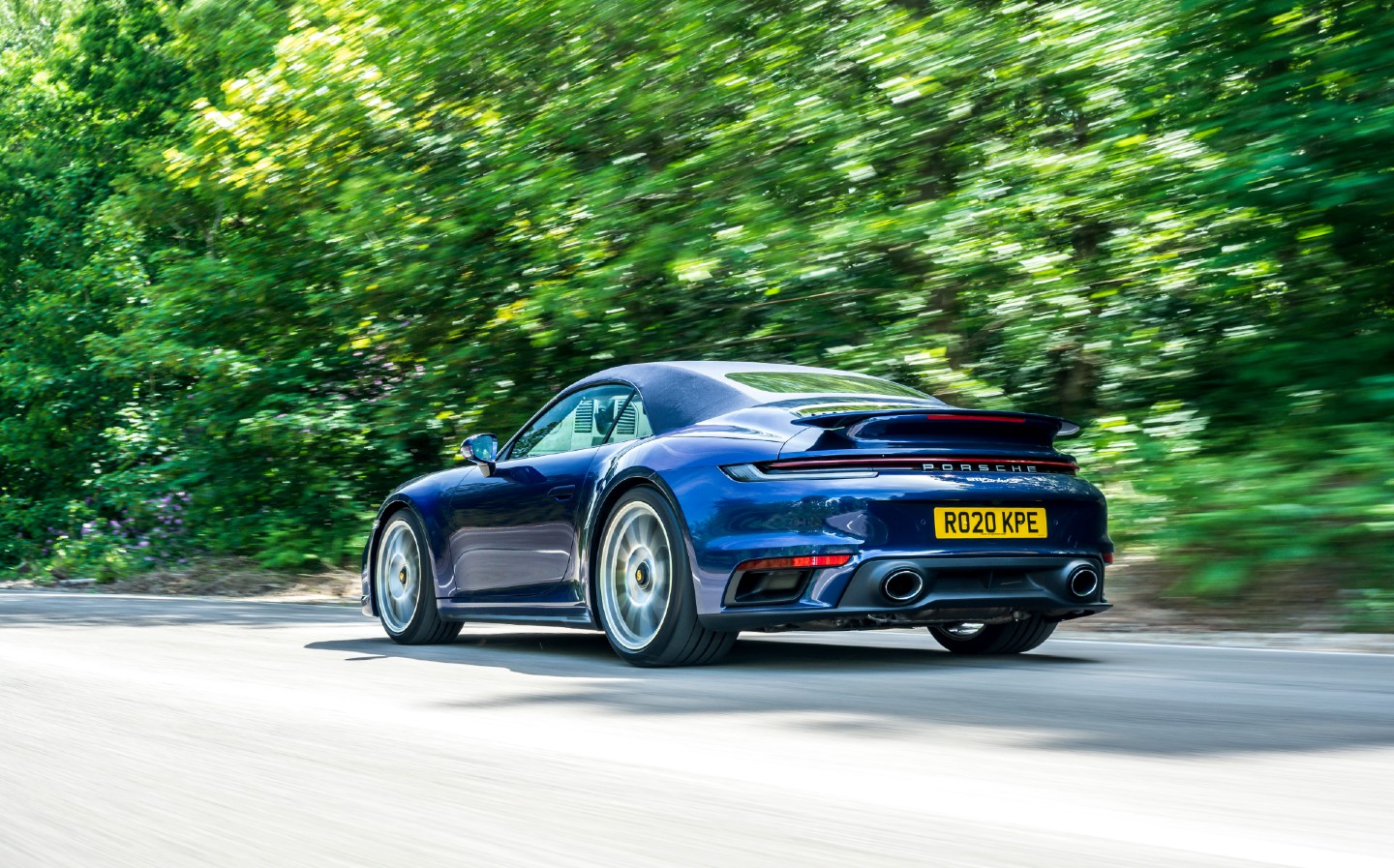 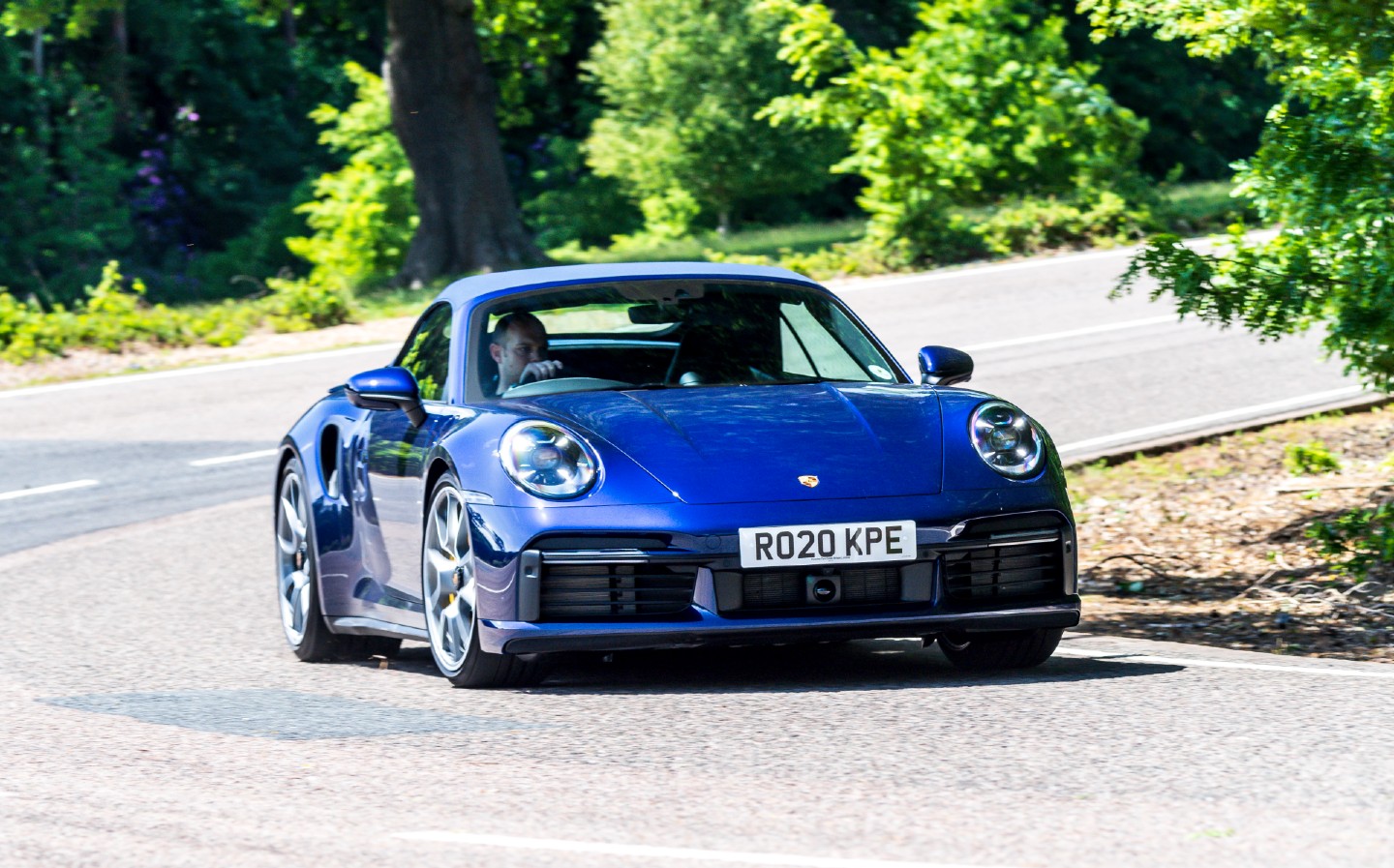 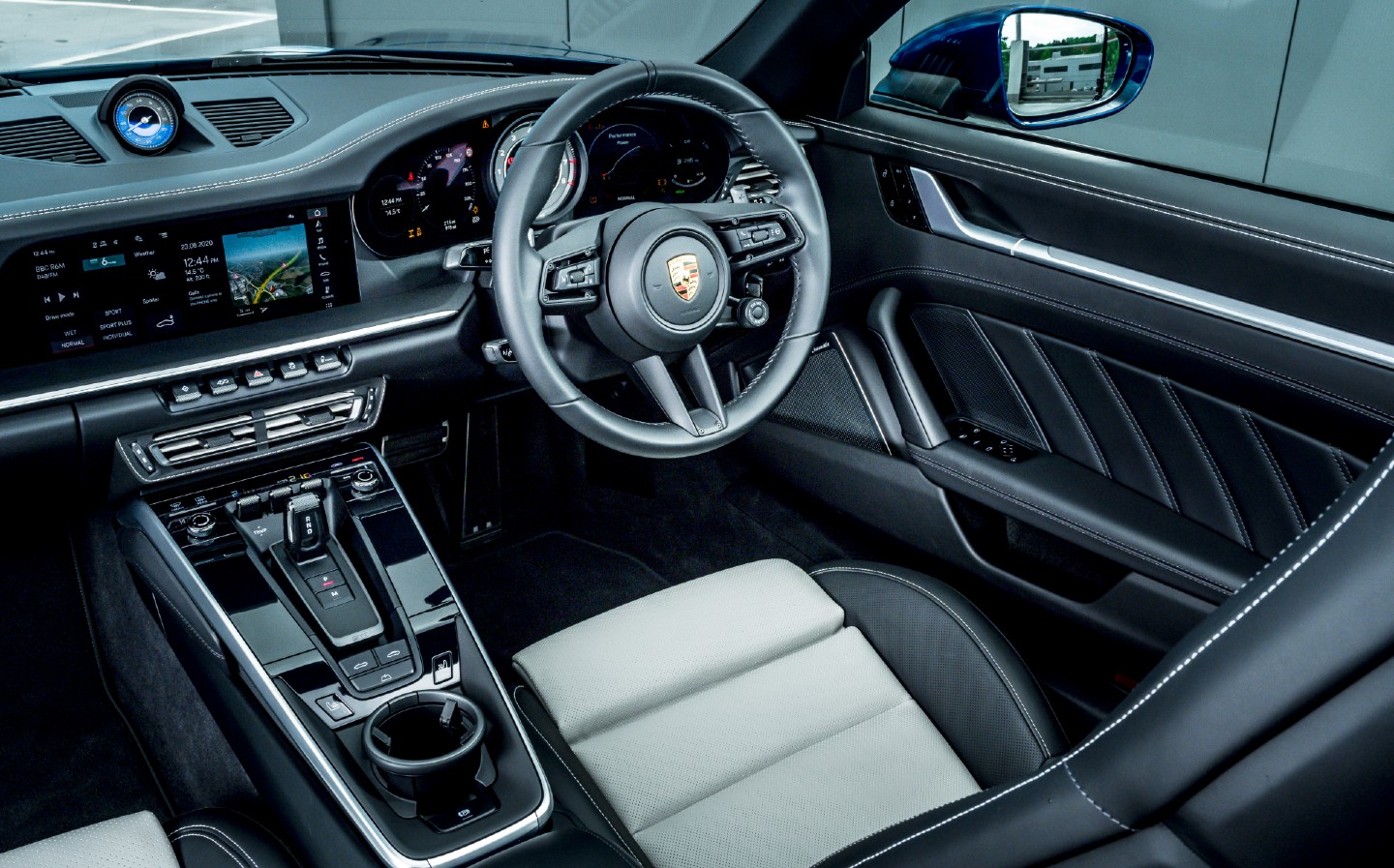 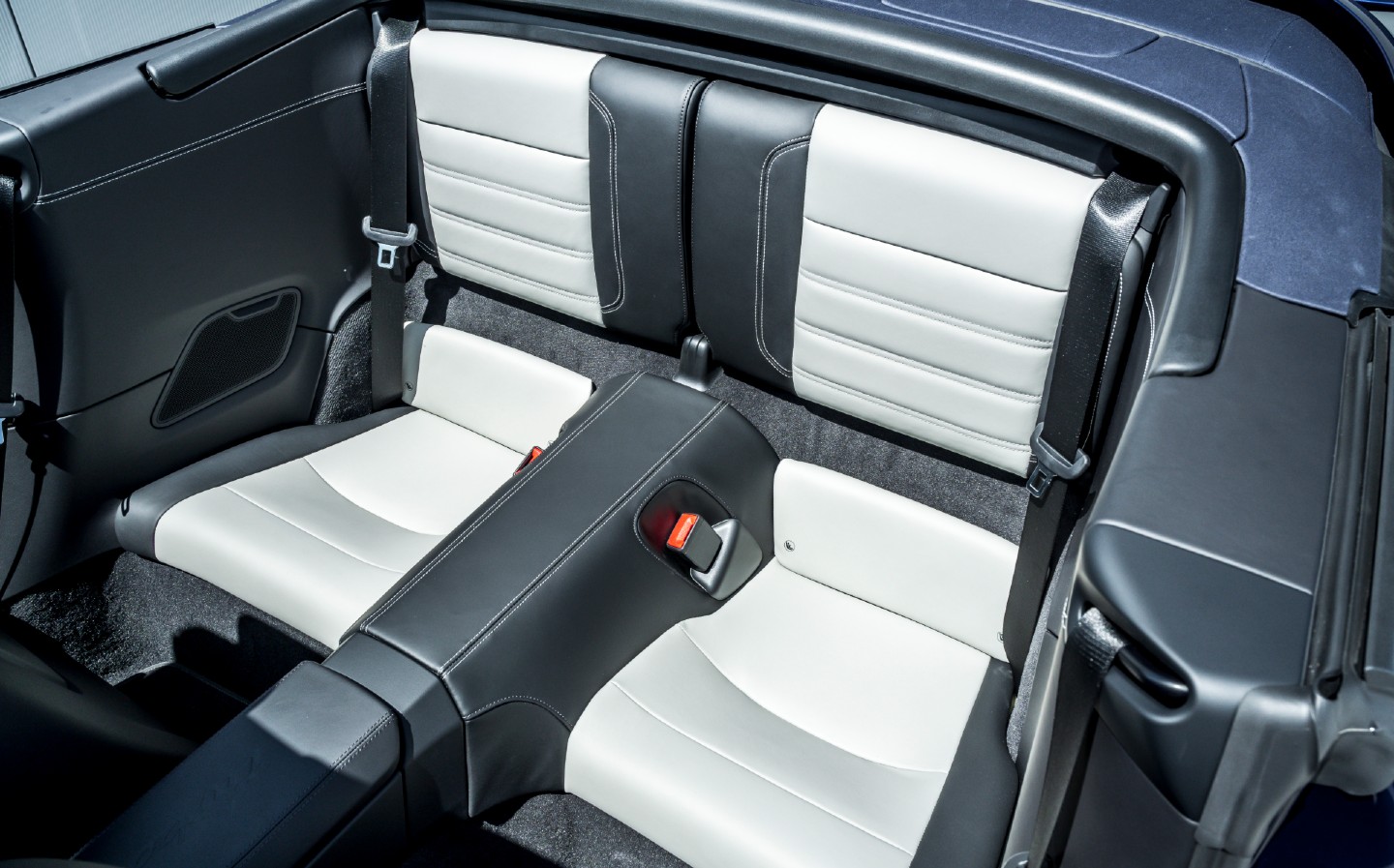 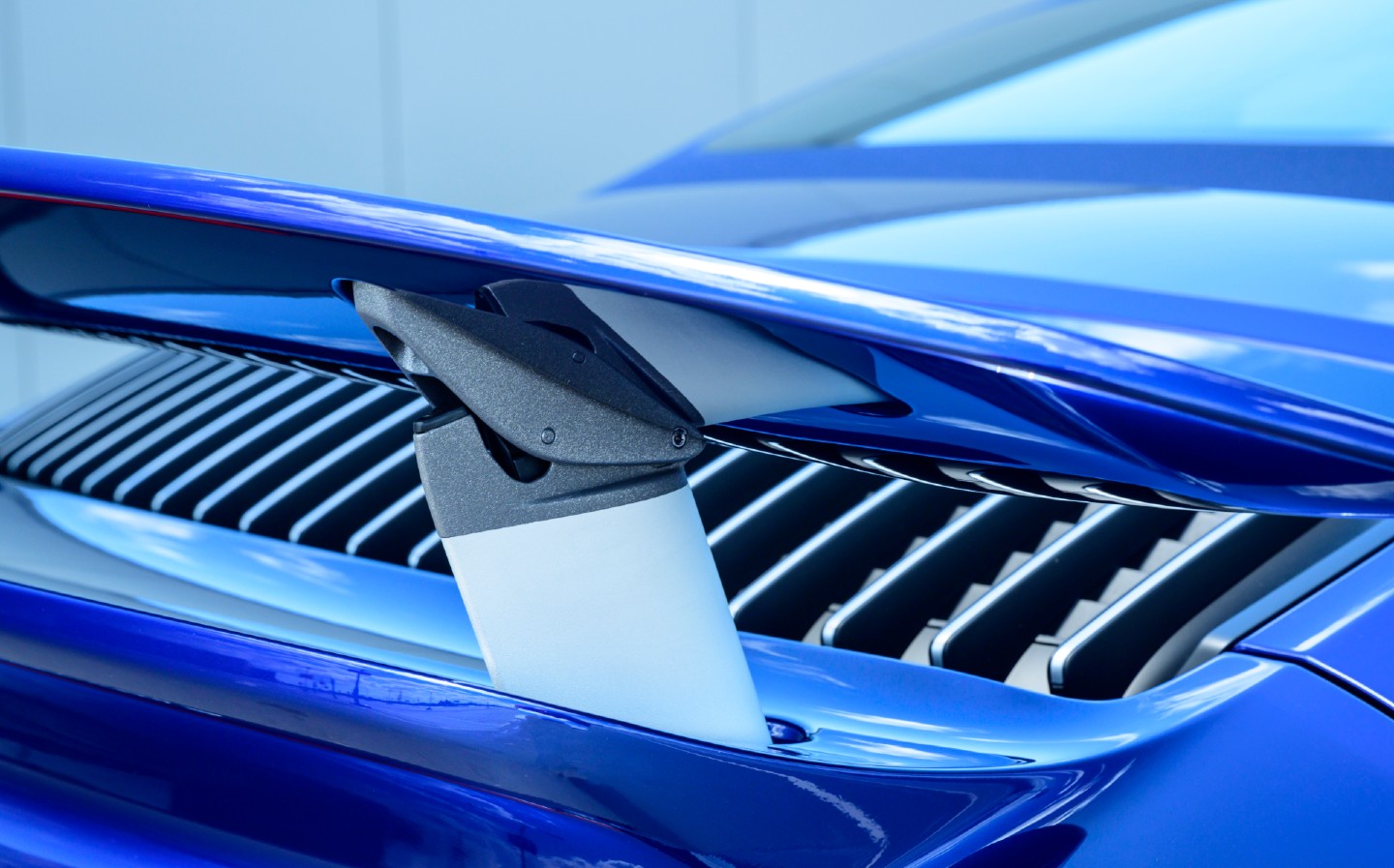 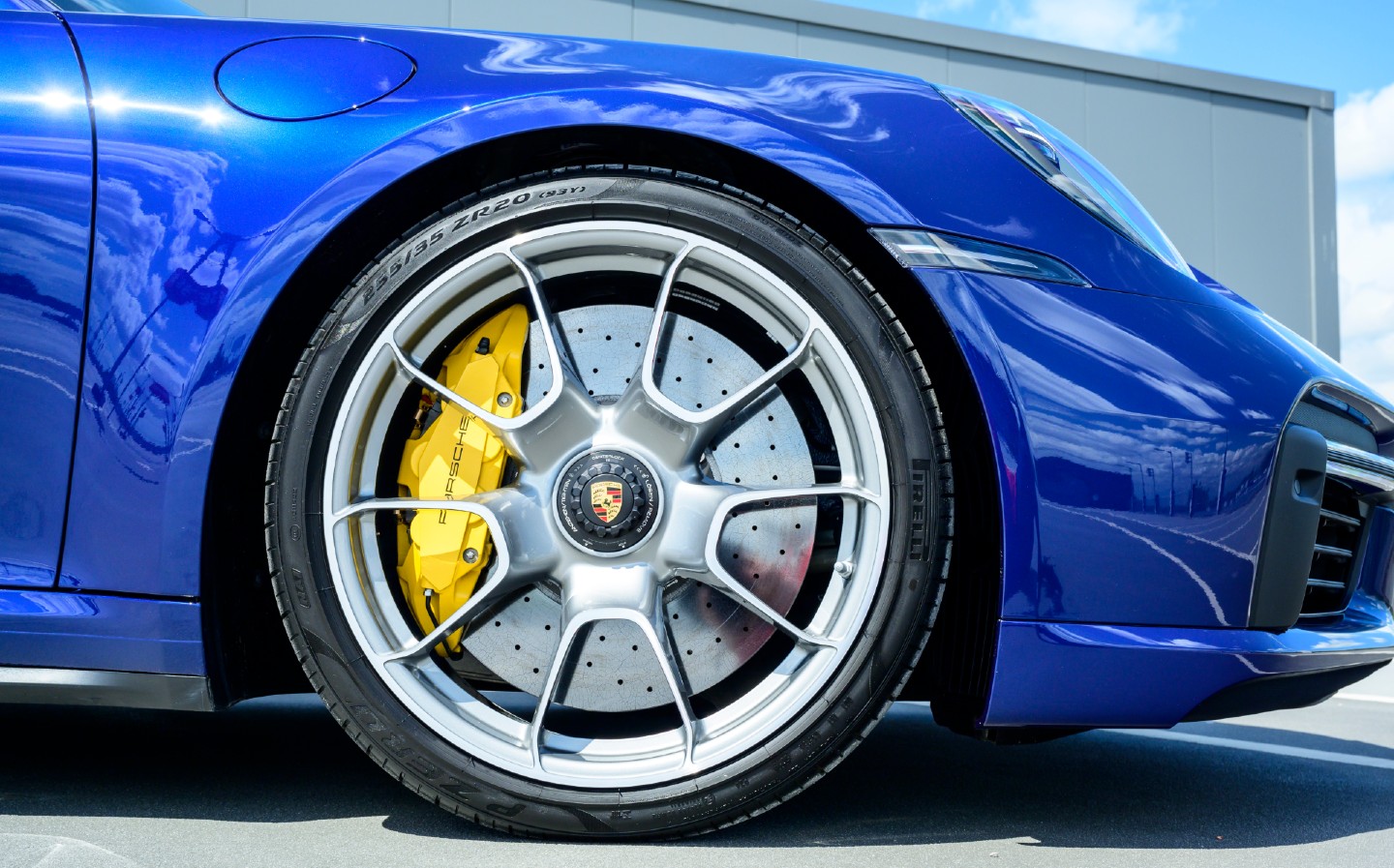 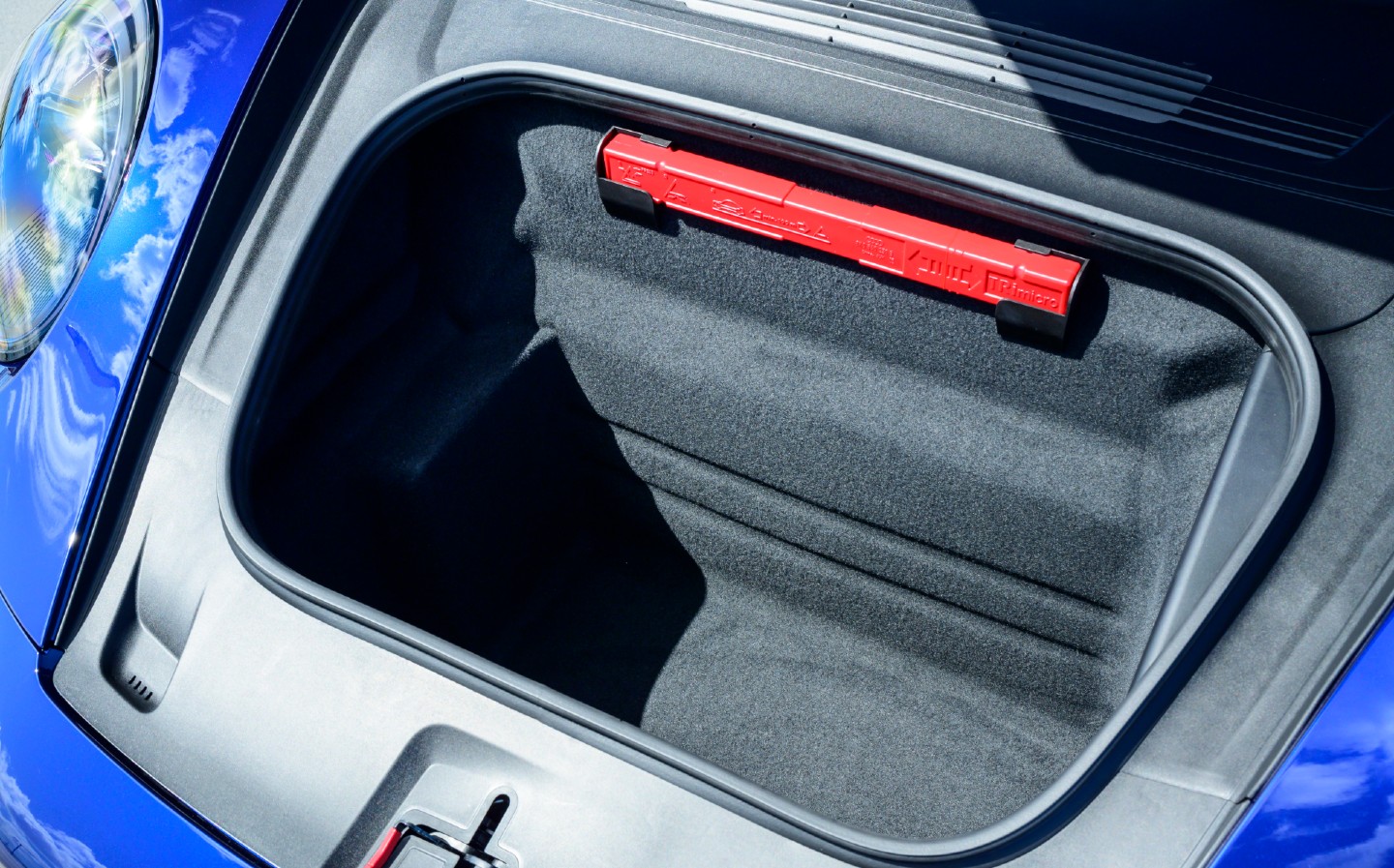 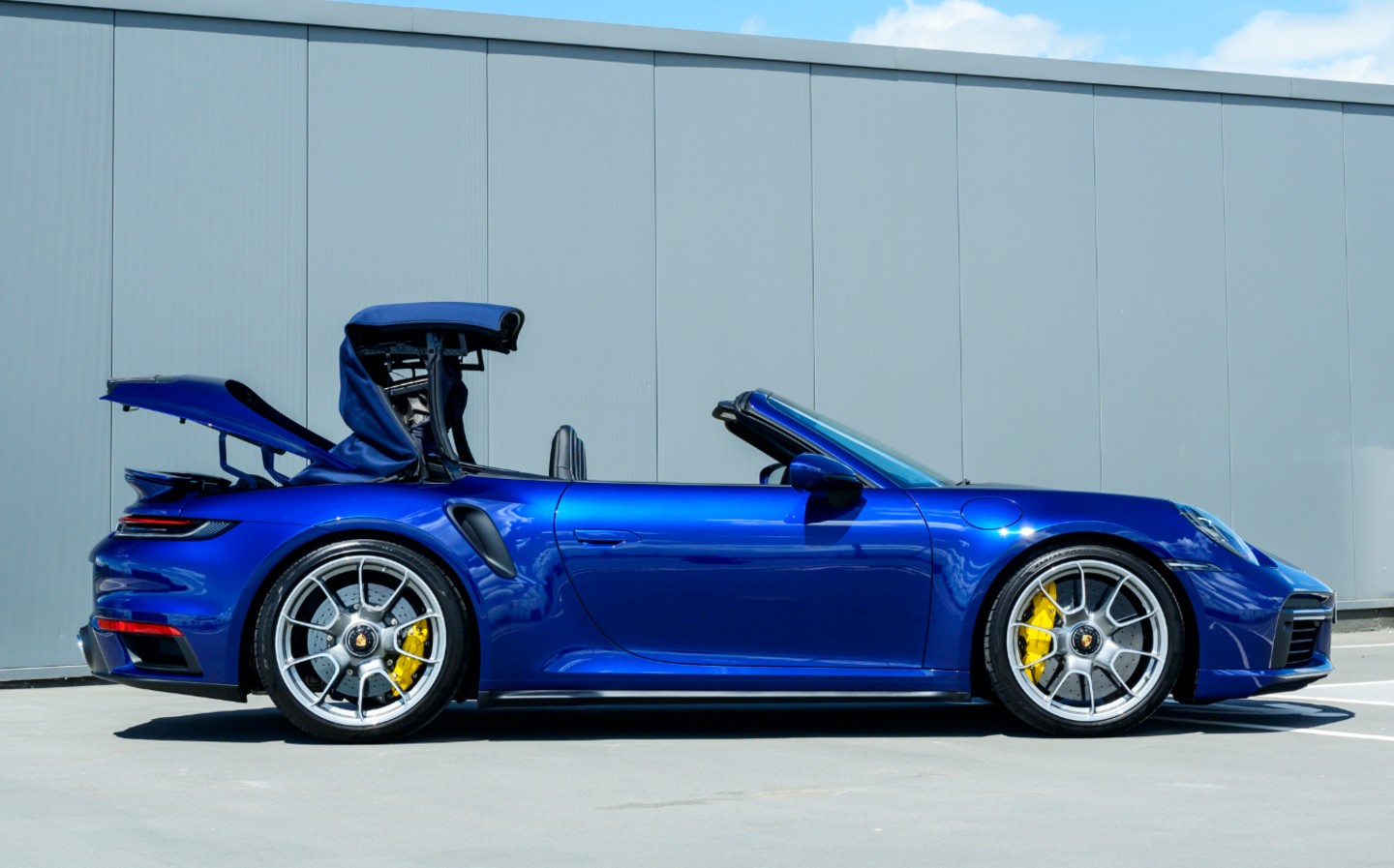 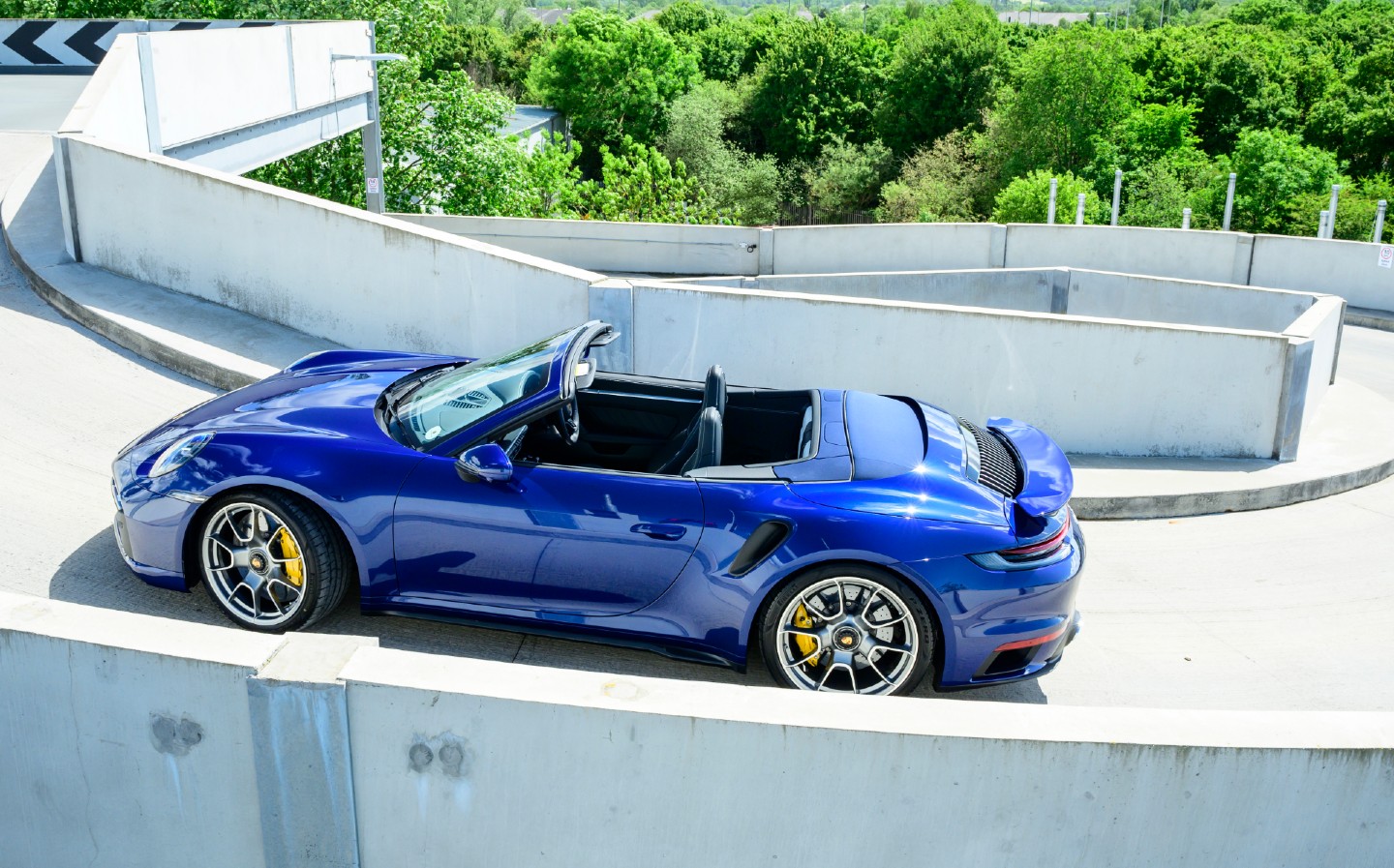 THERE ARE fast cars, like a Golf GTI or BMW M3, and then there are FAST cars. The new 911 Turbo S is a FAST car. Ludicrously so, in fact. Porsche says it’ll get from 0-62mph in 2.8 seconds and up to 205mph. Porsche also, notoriously, under-reports how quick its cars are so that no one’s disappointed.

Porsche’s been churning out versions of the 911 for well over half a century. In fact, over a million have been sold since the first one rolled out of the factory gates. There’s a 911 for pretty much everyone: a basic Carrera for the purist, a faster S, Turbo or Turbo S for people who absolutely need to be on the other side of whichever country they’re in at a moment’s notice, and GT-badged cars for track rats. You can have a manual shift or an auto (model dependent), and the roof can come off in a number of different ways as well (again, model dependent). Porsche’s approach to its halo car is, “We’ve got you.”

The latest iteration, codenamed 992, is the German Marque’s most versatile yet. In its base form it’s ferociously fast, yet can be comfortable on a cruise. You can still fit a surprising amount of stuff under its bonnet, and there are rear seats for small children or more bags. It’s just as happy bumbling to the shops as it is being blitzed down an autobahn.

The Turbo S Cabriolet has all of that, but adds even more ludicrous speed into the mix. It kicks out 641bhp and 590 lb ft of torque thanks to a pair of turbos attached to a 3.8-litre flat six engine. Be gentle with the accelerator and it behaves like a normal car, calmly getting you to your desired speed before sitting there happily. Show it the slightest sign of aggression and it’ll behave like a toddler full of sugar. A huge burst of energy shoots the car forward, pushes you back in your seat, and makes loud noises happen. A quick prod will lunge you forward; a sustained one will just keep you pinned in your seat until you run out of space (or reach the speed limit).

Even if you’re used to fast cars, the torque delivery hits like a hammer. The explosive power is sent to all four wheels (no rear drive only with the Turbo S), and torque goes to whichever corner it’s most needed to keep you on the straight and narrow. There’s a tiny wait when you plant your foot as the car spools itself up ready to go, but it’s so slight only people with beards will draw you up on it.

And that’s in the car’s ‘normal’ driving mode. The one for simply ferrying yourself around. Flick it in to ‘sport’ and the wick is turned up. Its eight-speed PDK automatic gearbox (the Turbo S is auto only) changes harder and faster, throttle response is increased and it gets louder, thanks to an optional sports exhaust package. The hard acceleration becomes a delicious body blow.

‘Sport plus’ stiffens the suspension and shortens its temper further. One for the track only, that. There’s a wet mode for when the British summertime does its thing, too. Seeing as the 911 has to be all things to all people, an ‘individual’ mode to set the car up to your preference (drivetrain as angry as possible, ride as soft as possible, noisy pipes on) is available as well. Steering feel is the same whatever mode you’re in, though the variable rack fiddles with ratios depending on how fast you’re travelling.

The most interesting setting isn’t labelled: it’s a tiny button on the wheel-mounted driver select switch that enables ‘sport response’, which gives you 20 seconds of sheer aggression. Think of it as a push-to-pass button – if you need to overtake a mile’s worth of traffic you press it, nail the gas, and you’ll do so in a cacophony of noise and thrust. You’ll leave a wake of confused people behind you, the sound of a flat six howl and a gentle cackle as mementos.

When you need to bleed off speed, the standard Porsche ceramic composite brakes do the job exceedingly well. They can be a bit sharp on first meeting but when you’re used to them they inspire confidence. Losing silly amounts of speed is, just as gaining it, a visceral experience. Stamping on the stop pedal results in your body bracing itself against the seatbelt, blood rushing to your face, and your head fighting your neck muscles. The braking force is almost more impressive than the acceleration.

Its steering is pleasingly heavy and responsive. You get a decent idea of what the front end is up to in corners, and have to put some effort in to steering. It suits the character of the car well. As the 911 Turbo S is all-wheel-drive, it’s not as sharp as some may like, but if you’re looking for utmost finesse you’re best waiting for the upcoming 911 GT3.

In the Turbo S’s standard setting it rides well. Lumps and bumps will cause minor consternation due to large wheels and thin tyres, but not so much you’ll need a replacement spine. Fiddling with its suspension settings to firm things up will undoubtedly get you around corners faster, but the ride becomes harsher. Also, on the motorway there’s noticeable tyre roar in the Cabriolet at 70mph. Seeing as you sit just behind the front wheels that may not be a surprise, but it’s something to bear in mind if you’re looking for a distance cruiser.

Infotainment is covered by a centrally-mounted touchscreen. It’s slick, easy to use and becomes second nature rather quickly. Apple CarPlay means you can use your own navigation, messaging, and audio apps on the fly if you prefer to ignore Porsche’s in-house tech.

It’s an everyday supercar, but it’s not without fault. While there are rear seats, they’re VERY upright, which could make a long journey uncomfortable. In case you hadn’t noticed, there’s a fair bit of stuff in a 911’s rear end (the engine, for example). In the coupé it’s no problem, but in the cabriolet its engine cover can make seeing out of the rear a pain. With the roof in place it takes up a small chunk of rear window space, and with it down it takes up what would be useful visual real estate.

Small quibbles for an otherwise stellar way to get around. You’ll be seen, you’ll be heard, and you’ll have a ball. Quickly.