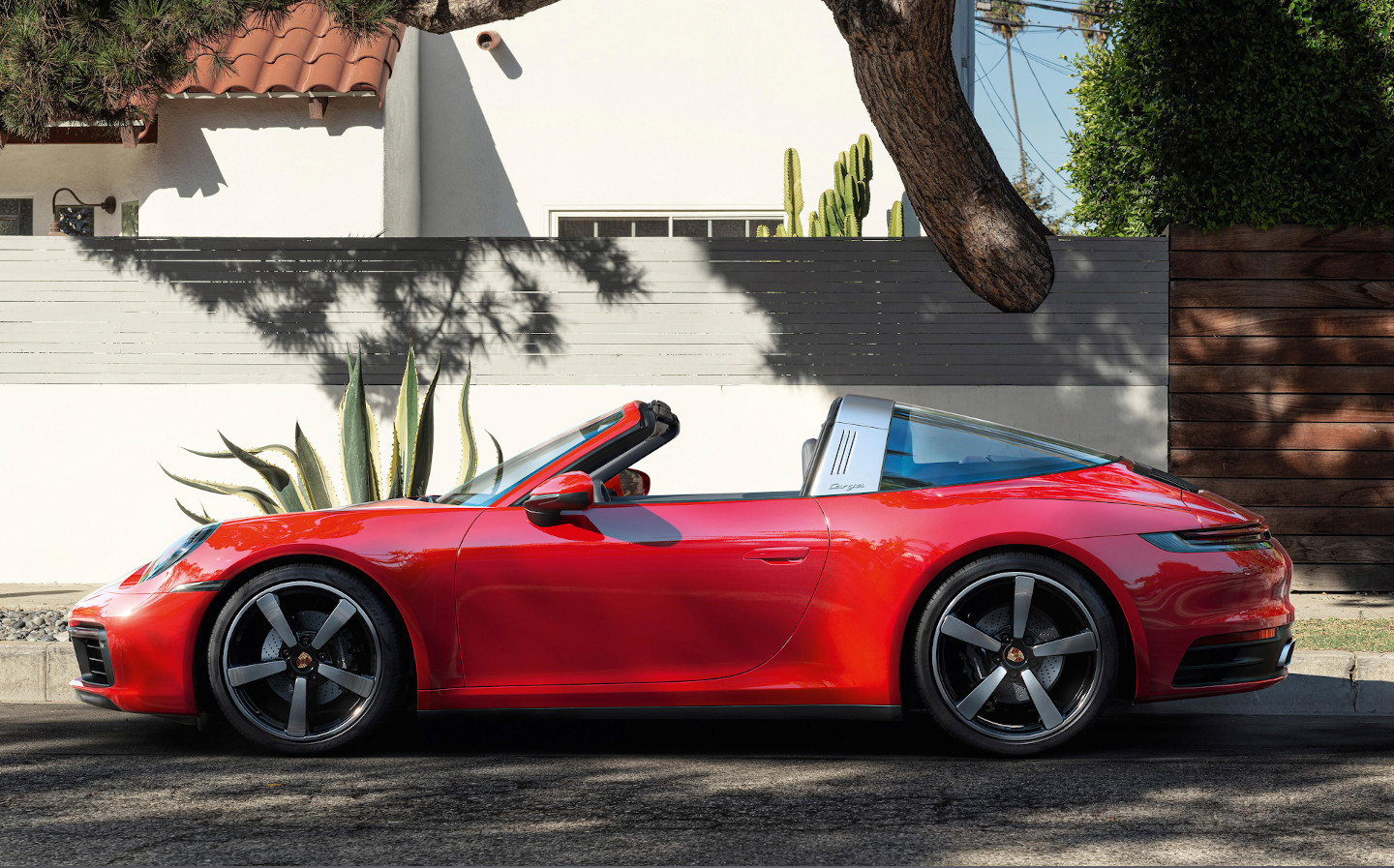 The world can thank the United States for the very existence of the Porsche 911 Targa. In the mid 1960s, the auto industry suspected that the U.S. was on the verge of introducing roll-over regulations that would outlaw full convertibles. As this was a crucial market for Porsche, the company engineered the Targa with its B-pillar hoop, which is (was) effectively a giant roll bar.

Those early Targas were generally regarded as the least attractive 911 body style. And when it became clear that there would be no convertible ban, Porsche began making full convertibles alongside the Targa.

Ironically, more than half a century after its introduction, the latest 911 Targas are arguably the most gorgeous models in the 911 range. And, of course, the Targa’s party trick is that folding roof section. At the touch of a button, the entire rear glass section raises as the roof folds itself into the rear bay. The glass then descends back into position – the entire, rather balletic process takes about 19 seconds. Roof up or down, the car looks terrific and has the added benefit of more security with the roof on. 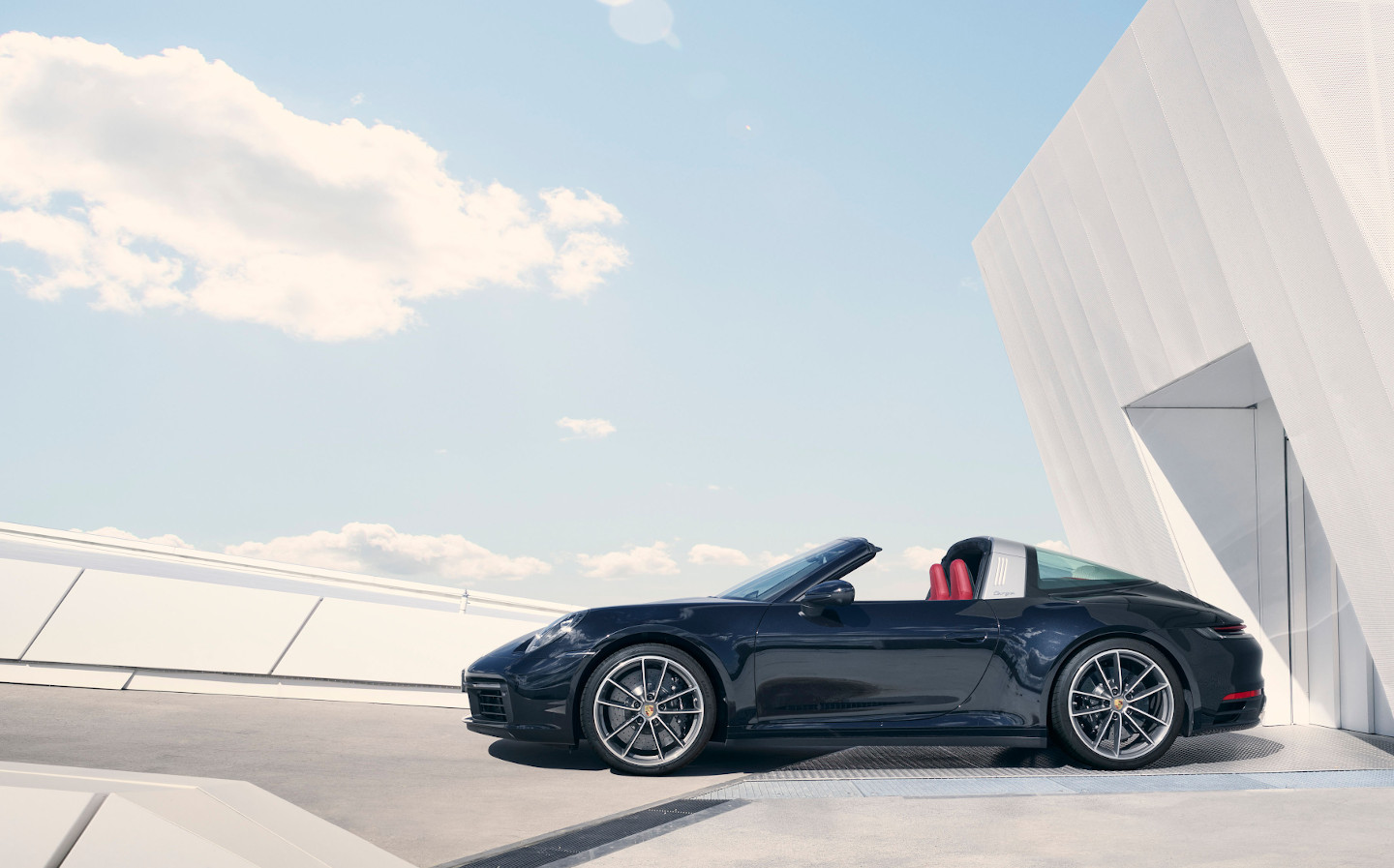 This latest 911 Targa, recently launched, features standard four-wheel drive across the range, which includes the entry level (if you can call a £98,170 car ‘entry level’) Targa 4, a snortier 4S and the range topping GTS. Power, courtesy of their 3.0-litre turbo-charged six-cylinder boxer engines, ranges from 370 to 450hp. The range-topping engine will get you to 62mph in just 3.7 seconds and top out at a hilarious 191mph. All of that performance and yet the GTS still manages to return a combined fuel consumption of 29.1mpg. Have cake, will eat.

The Targa can be specified with either a pin-sharp eight-speed PDK ‘auto box or a newly developed seven-speed manual gearbox, which should keep the purist crowd happy. That said, the purist crowd will be slightly less happy about the fact that the Targa is considerably heavier than its coupe sibling, thanks to the hardware involved in creating that Targa form. The fact is, though, that below the beltline, the Targa is pure 911 and is unlikely to deliver anything other than a superbly rewarding drive. In fact, this latest Targa is slightly faster than the model it replaces.

Predictably, the Targa also features technology that would have been blue-sky a couple of years ago. Porsche InnoDrive, for example, is an adaptive cruise control system that can predictively change cruising speeds according to road conditions nearly two miles down the road. Using data from the sat-nav, InnoDrive can work out the ideal speeds for all upcoming corners and pair that with traffic information from radar and video sensors to calculate the best speed.

Another really clever bit of tech is the SmartLift. It can be programmed to lift the Targa’s front end about 1.6 inches for more ground clearance by remembering the GPS coordinates of difficult things like steep driveway entrances.

So the latest Targa is a brilliantly realised evolution of that 1965 original. I suppose we should thank the Americans for that.