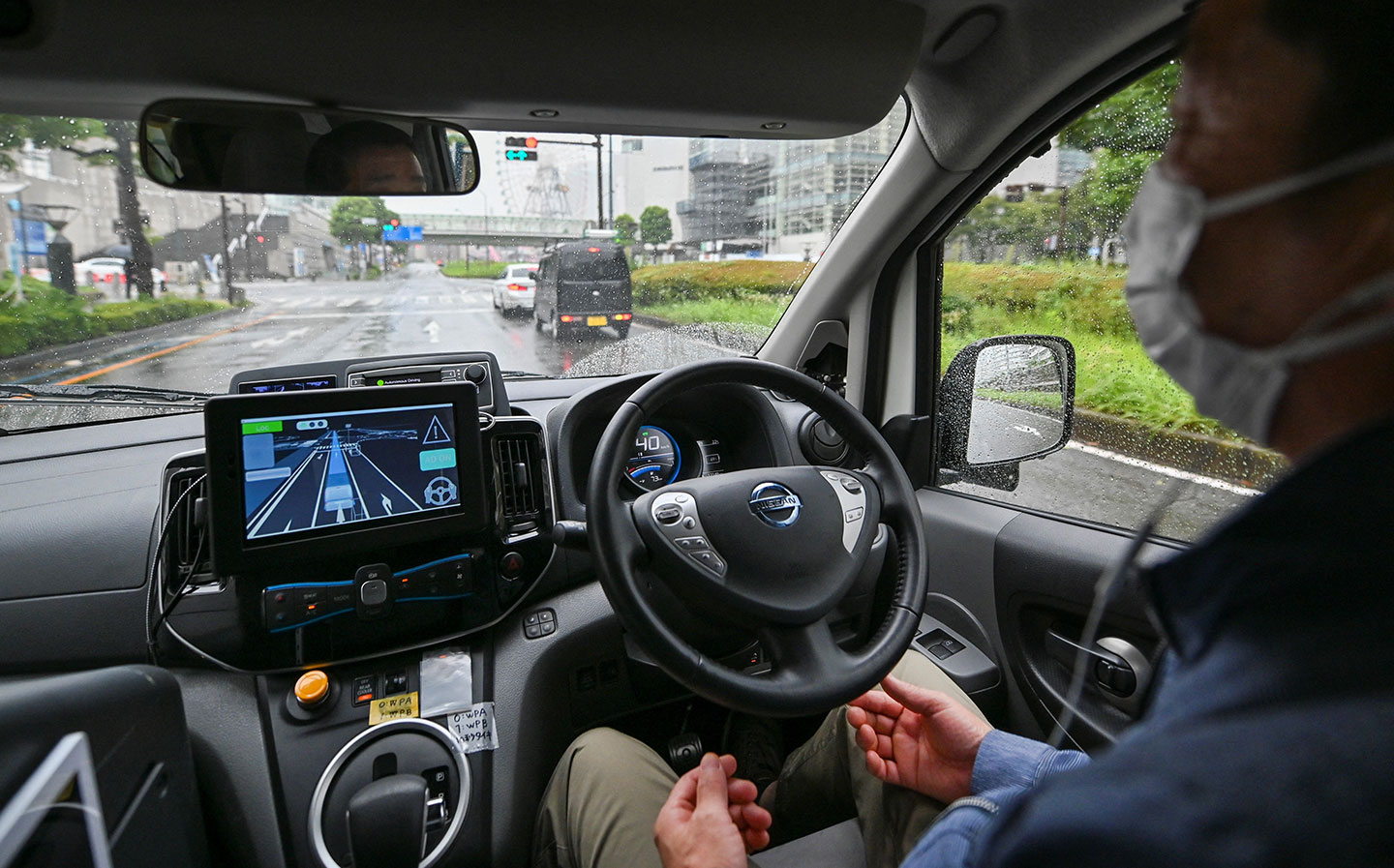 CONTRARY to what some people think (we’re looking at you, Tesla owners) there are no commercially-available full self-driving cars on the roads today. That’s for two main reasons: the technology to enable a vehicle to drive itself everywhere, all the time, isn’t ready yet; and the law doesn’t allow it in most countries.

However, there are numerous pilot schemes around the globe trialling autonomous vehicle technology, particularly in China and North America, and governments are relaxing the rules to enable the industry to continue their work apace. 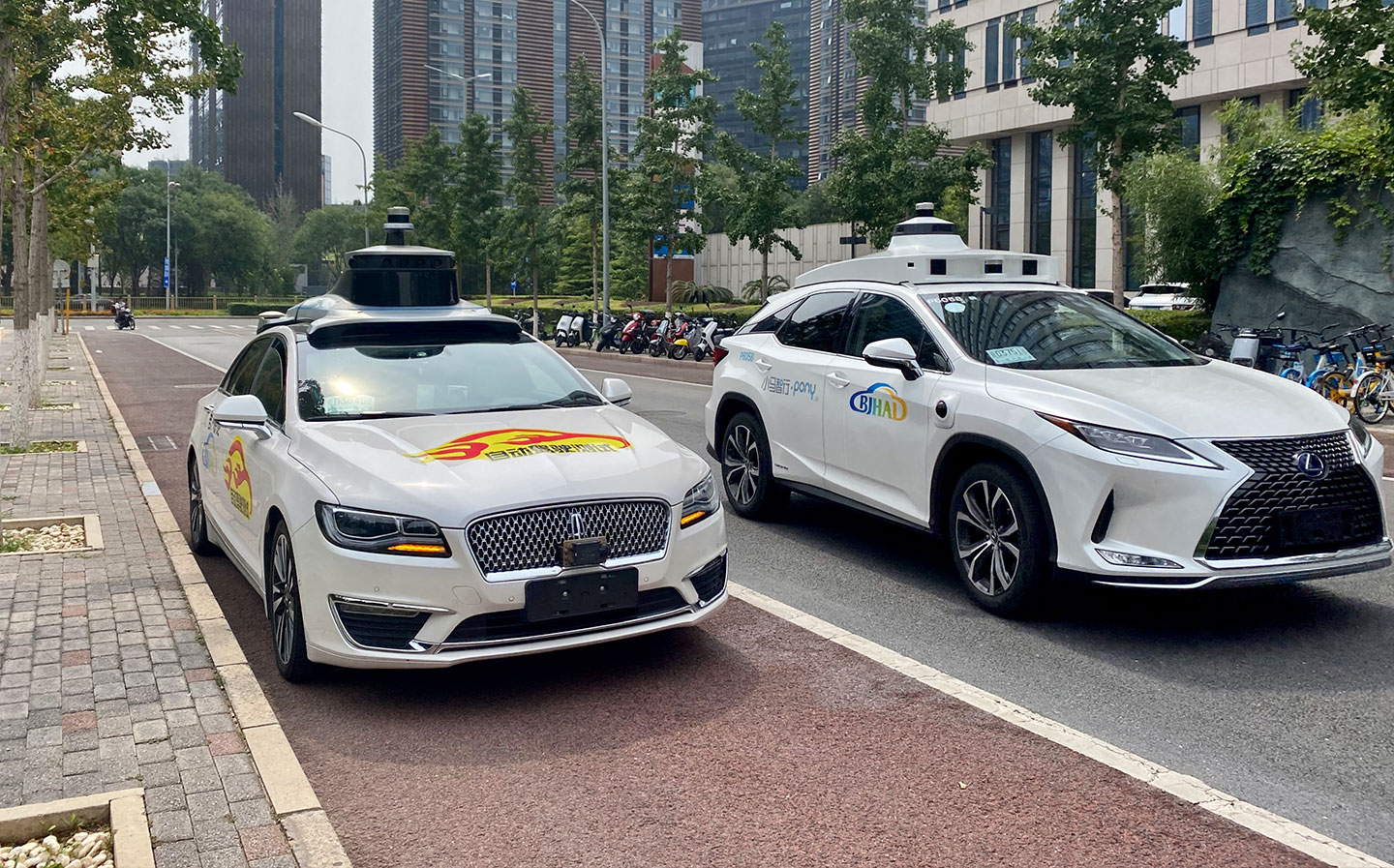 In the UK, the government has said that by the end of 2021 it will change the law to define cars with certified standards of ALKS (Automated Lane Keeping Systems) as “self-driving”, meaning drivers will be allowed to take their hands of the wheel on designated sections of road. This will initially be limited to motorways, and only at speeds below 37mph, but it’s seen as the first proper step towards allowing fully-autonomous cars on our roads.

And while no car on sale can fully drive itself yet, what we do have today are cars with a certain amount of self-driving capability, with innovative driver assistance technologies such as cruise control and automatic emergency braking.

The trend suggests the question of “when will we get autonomous cars” is not about jumping from what we have today to a fully self-driving car overnight; we’re likely to see a continued gradual progression.

While car enthusiasts may not relish handing over control to a computer, the benefits of full self-driving are clear: no chance of driver error, caused by distraction or fatigue; the opportunity for passengers to make better use of time, for work or leisure, while en-route; and the chance for blind, disabled or even inebriated people to get around without having to negotiate public transport. 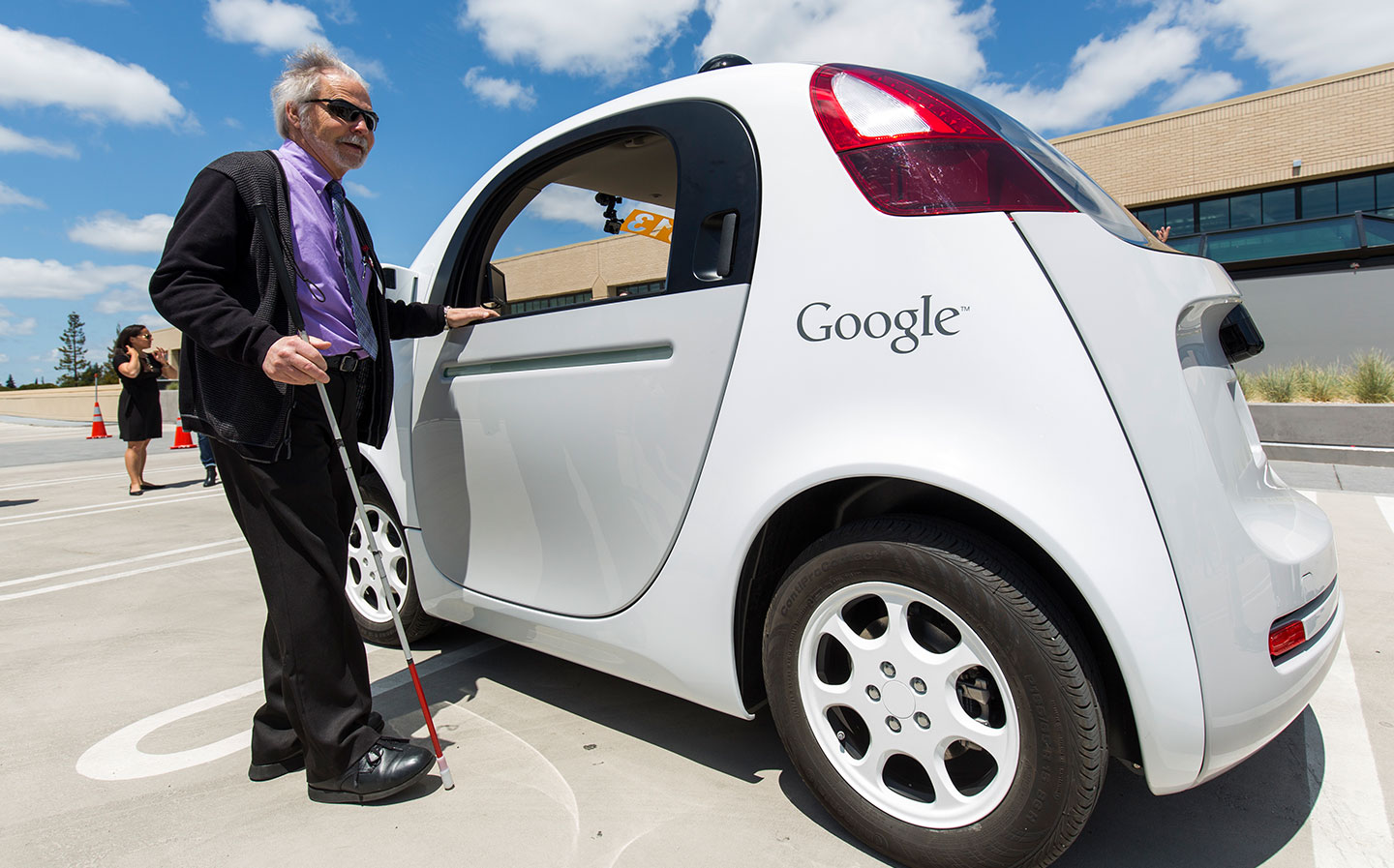 And according to Mike Hawes, chief executive of the Society for Motor Manufacturers and Traders: “Automated driving systems could prevent 47,000 serious accidents and save 3,900 lives over the next decade through their ability to reduce the single largest cause of road accidents – human error.”

In an attempt to clarify the different types of self-driving car, in 2014 the Society of Automotive Engineers (SAE International) released its Levels of Automated Driving standard, identifying five distinct levels of autonomy above the traditional vehicle, from those with basic cruise control to ones that can pilot themselves fully, without the need for a human driver.

With a significant gap between levels two and three, automotive engineers last year began to talk about an addition Level 2+, which has been reflected here. 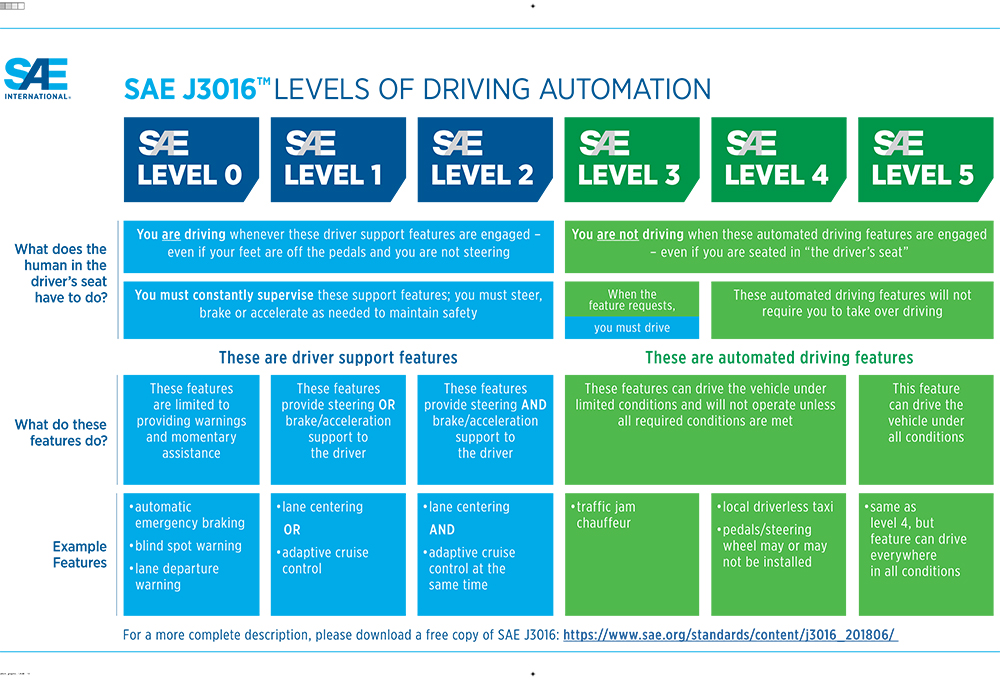 This is when all driving tasks are performed by the driver. Interestingly, a car with active safety features can still be considered at Level 0 if they are switched off, or if they’re only engaged in an emergency situation.

Features such as adaptive cruise control, which will automatically control the car’s speed to keep a safe distance from the vehicle in front, or lane centring are considered SAE Level 1 — but only when used on their own, not together.

Note: The Mitsubishi Diamante is believed to be the first car to feature adaptive cruise control (though with speed adjusted via the engine, without braking assistance) in 1995.

This is when a car has systems that can provide assistance of both the steering and accelerating/ braking functions. Most new cars are at Level 2 autonomy, and by law the driver must be in control at all times.

A big leap because these vehicles are self-driving in certain conditions, though drivers have to remain alert, as they may need to take back control with a few seconds’ warning. The cars certified with ALKS type-approval in the UK will be considered Level 3 “self-driving”.

Note: Level 3 cars were expected to arrive by mid-2018 but it has taken longer than expected to get the technology and legislation in place to allow it.

A number of cars are thought to be ready for this, including most Teslas, the Audi A8 and Mercedes S-class, though in fact the first Level 3 cars aren’t expected to be type-approved until shortly before the end of 2021 (at the time of writing).

Initially, those that are ALKS type-approved won’t be allowed to drive themselves except on motorways at speeds below 37mph, and the driver will need to take over within 10 seconds of an alert from the car.

With a Level 4 self-driving car, there is no expectation that the driver will take control, even if the car’s automated systems start to struggle; instead, it will need to be capable of pulling over safely itself. But Level 4 automated cars are not expected to be able to operate in all conditions, everywhere. 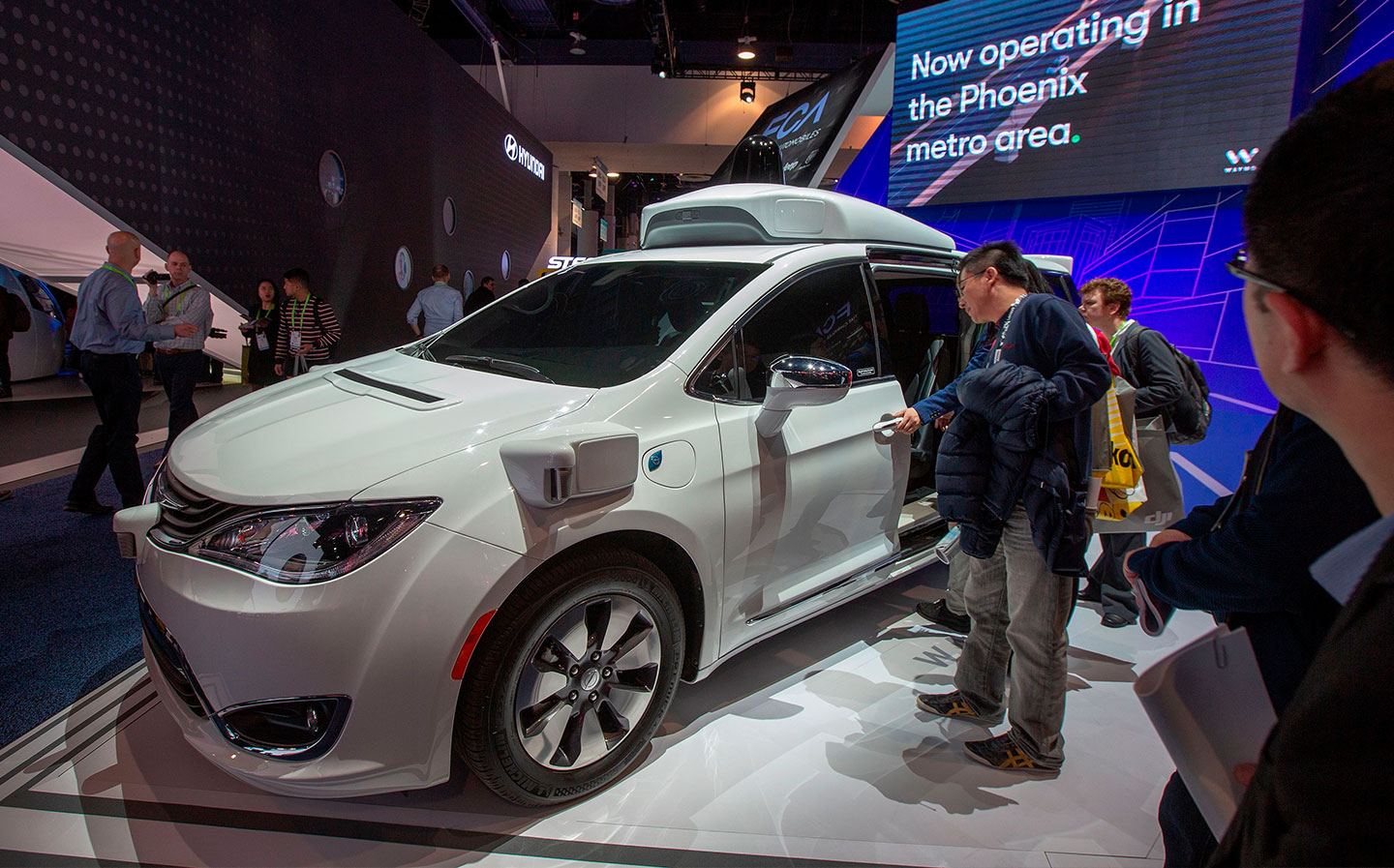 Note: There’s a big technological and legislative jump again from Level 3 to Level 4, and it’s not expected that Level 4 cars will be made road legal in the UK any time soon. In fact, some people believe that, unlike airways, road networks are so complicated that Level 4 automation will be impossible.

However, companies such as Waymo in America are already testing high automation vehicles on the roads, with safety drivers ready to intervene if necessary.

A small leap from Level 4 to Level 5, in theory:these cars will be able to drive themselves everywhere in all conditions, with no expectation of a human taking over driving duties.

Note: Because a human won’t be needed to take over at any time, with Level 5 autonomous cars there will be no need for a steering wheel or pedals, or even windows — they will be pods that can be designed purely for comfort.