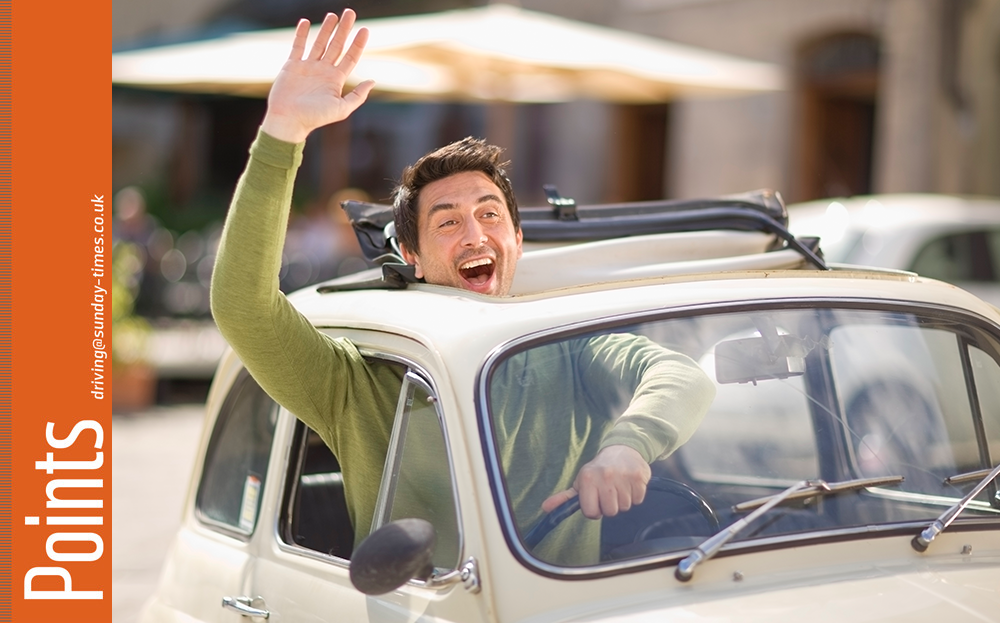 Regrettably Wallace Curtis’s lack of acknowledgement from drivers after giving way for them is not just a London thing — it happens everywhere (“Capital offence”, Points, last week). The response from motorists can be a wave, even a mouthed “thank you”, all the way to a finger raised from the hand on the steering wheel. Often it is nothing. What a discourteous rabble we have become.

Our increasing lack of courtesy is a nationwide offence. I suspect driver tuition may be to blame; or perhaps it’s just a lack of awareness of others’ actions.

Mr Curtis should get himself down to London SW14. Here we are pretty good at acknowledging the helpfulness of other drivers.

I live in rural Devon, where most roads are narrow country lanes with passing places and I receive a friendly wave or thank you 99% of the time. On the odd occasion when my courtesy goes unacknowledged, my wife usually comments that it must be a tourist from London.

When I’m ignored, I give the driver a wave of thanks, hoping to change their behaviour in the future. I don’t hold out much hope, though.

You say the Mercedes-AMG C63 S has a V8 “under the hood” (“What sales meeting? I’m hitting the club”, last week). Do you watch too many American movies (films)?

Car before the hearse

When will people stop using the crass expression “undertaking” for overtaking a vehicle on the inside (“Passing shot”, Points, last week)? Whether moving past on the inside or the outside, you are still overtaking. Undertaking is a process that is carried out after you die, sometimes through stupidity on the roads.

Ali Kelman, in having a go at Phil Norrey, chief executive of Devon council, (“Verging on the ridiculous”, Points, last week), quoted PT Barnum: “There’s a sucker born every minute.” Given that just about every mover and shaker in modern Britain is a spiv boasting a college education, more relevant would be a line from WC Fields: “Never give a sucker an even break.”

A little community spirit never did anyone harm. We are, however, all put to shame by the American writer David Sedaris, who lives in West Sussex and not only clears the verges in front of his home, but for miles around. Horsham district council is so impressed by his activities it has named a rubbish lorry after him.

Edward Mason thinks we should end the fallacy of car tax entitling motorists to own the road (“Road tax myth”, Points, last week). If I don’t pay my car tax, I can’t drive on the road. I happen to think that paying my taxes entitles me to something in return.

Unfortunately cyclists enjoy the benefits of roads, even if they don’t pay — along with their lack of insurance and registration or any test of aptitude.

Once is not enough

Your comparison test (“Ready, repair, go — who’ll get you back on the road?”, last week) had simple rules, but surely the result has little validity if you test only once for each company.

Contrary to the experience of Tim Shallcross, I have to report first-class service from Green Flag after a write-off crash in France. The UK operator helped the French police and ambulance services get us a hospital check-up and found us a hotel for the night. All seamless and at no cost to me.

Although you report that our patrol was outstanding, the positioning in the article might suggest to the casual reader that we are not first rate. In fact the AA has just been awarded Which? “recommended provider” status — the 10th successive year the company has held this or the previous “best buy” recommendation.

Top of the crass

What do Mercedes AMGs, M-series BMWs and Range Rovers have in common with the tailors’ windows in Savile Row, which are full of suits that look as if they should be £25 rather than a hundred times that amount? A clue: “Anyone can look common and vulgar: it just takes money.”

“Real” beach buggies had engines from written-off Porsche 911s (“California dreamin’ is back as Britain catches the buggy bug”, last week). There were many such engines in late-1960s California, because of the dangerous combination of US driving skills and the 911’s handling quirks.

If you have a tracking device fitted to aid car recovery in the event of theft, please note that some do more than just help the police track the vehicle. They can also transfer real-time data of every journey made and the speed of travel, which is stored by the tracking company. It must be handed over to the police if requested. This basically means that one is subscribing and paying for a unit that in effect is a speed camera built into your car.