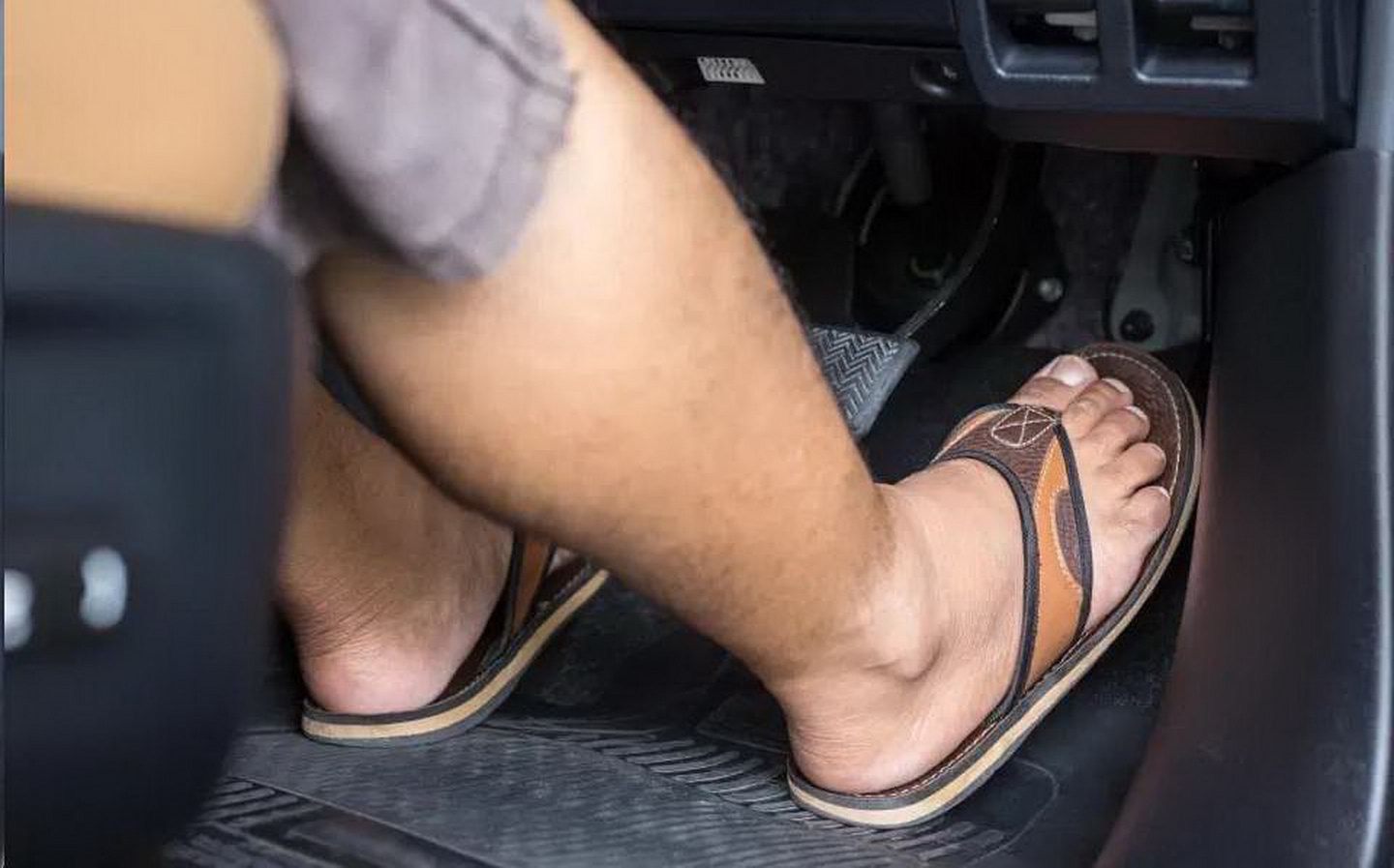 WHEN TEMPERATURES rise even a little about average in the UK, that signals the moment to kick off the trainers and slip on some sandals or flip-flops. Some may even be tempted to go barefoot on the drive back from the beach. But is it against the law to wear sandals or go barefoot while driving in the UK? And what about swapping flat shoes for heels on a night out?

Here we cover the ins and outs of footwear for driving, what’s legal and what might happen if you don’t wear suitable shoes when behind the wheel.

Is driving barefoot, in heels or with flip flops illegal?

There is currently no explicit law that bans driving with bare feet, in heels or flip flops, or any other form of sandals or footwear. However, Highway Code 97 states that, before setting out on a journey in a car, it’s important that “clothing and footwear do not prevent you using the controls in the correct manner”.

That may be open to interpretation but getting behind the wheel barefoot, or for example with wet flip flops or sandals covered in sand, may be deemed dangerous by the police if they feel it could prevent you from operating the pedals correctly. It’s more likely, though, that this would be a consideration in the event of an accident, rather than when entering the car.

Is driving barefoot, in heels or with flip flops safe?

Regardless of the law, it is generally accepted by experts that driving barefoot, in heels or flip flops compromises safety. In fact, the same applies to large hiking boots, sandals and slippers, too.

Slip-on shoes such as flip flops, sandals, slippers and some types of high heels may allow the driver’s foot to slide out of the shoe, reducing the pressure on the brake pedal at a critical moment. The same shoes could become lodged under the pedals, preventing the driver from pushing them down fully, or even trapping the driver’s foot.

It is advised that a driver wears shoes that cannot slip off the foot, which offer a good balance between sturdiness and suppleness to allow easy control of the pedals.

Thick hiking boots or snowboard boots are not recommended either. They may be too wide for the pedals in a car and cause the driver to press two pedals at once, while the stiffer structure of the boots might also restrict the driver’s feet from moving quickly when required.

What are the potential penalties for having inappropriate footwear?

If the police see you attempting to get into the driver’s seat with what they deem to be inappropriate footwear to control the vehicle, it’s likely they’ll warn you not to rather than penalise you.

These come with a fixed £100 fine and three points on your driving licence, though the police officer may offer a driver education seminar instead.

If you are seen to be driving erratically or dangerously and the police stop you and believe that your footwear contributed to that behaviour, the same penalty applies, though they may also refer you to the court system. In that case, you could end up with nine points on your licence and a fine of up to £5,000.

Depending on the severity of the incident, the judge may apply an outright driving ban, demand community service or even stipulate a custodial sentence. It’s likely the latter would only apply if a crash causes injury or death and the driver’s choice of footwear is deemed to be a contributing factor.

If it is proven that a crash came about because of reckless or careless behaviour by the driver, many insurers will not pay out. That could apply if the driver’s footwear is deemed by the authorities to be a factor in the incident.