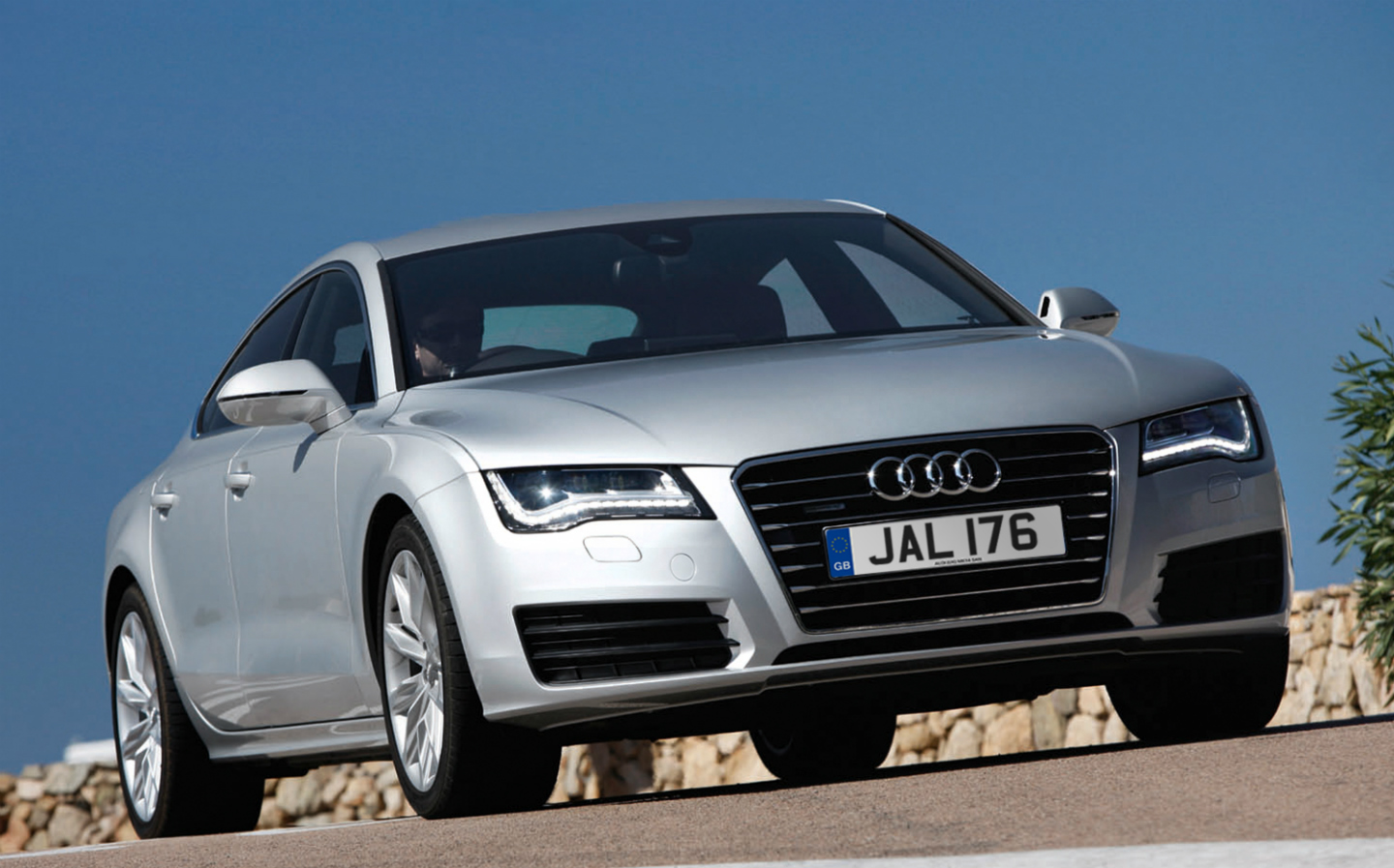 Buying such a car new is a dream for many of us; the harsh reality of eye-watering prices makes it more sensible, on the whole, to buy a used version.

Large luxury cars such as those reviewed here fall in value nearly as fast as a banknote during hyperinflation. After three years their value is typically half the new price — which makes them a great bargain for used-car buyers.

One of the first choices for buyers to make is between diesel and petrol power. Despite the Volkswagen Dieselgate scandal, CAP HPI, a company that monitors sales of used cars, reported recently that diesel was still in demand with buyers, and residual values remained robust.

The choice of saloons has been broadened by the recent arrival of four-door models styled to resemble low-slung coupés. These sacrifice a little back-seat and luggage space for more rakish looks.

Don’t forget to factor running costs into your calculations. A full service is expensive at a franchised dealership, a set of good-quality tyres will cost more than £500 and road tax and insurance should be researched early on to avoid shocks to the system.

If a sports saloon meets your needs, have a look at these five, all costing less than £20,000 and all available through manufacturers’ “approved used” programmes.

Look at it; just look at it: the A7 is one of the most striking saloons on the road. Audi’s designers excelled themselves with this model, bringing excitement to a part of the market that’s traditionally as conservative as a pinstripe suit.

It looks like a coupé from some angles, yet it has four doors, space for two 6ft adults in the back and a 535-litre boot.

The interior would win any button count, but thankfully the controls for Audi’s multimedia system are easy enough to master. The car is beautifully appointed and feels impressively well made.

Hushed on the move, the A7 Sportback makes a great long-distance cruiser. The roadholding is secure, but those looking for a sports-car feel could do better elsewhere.

A 3-litre V6 diesel engine is widely available in cars for less than £20,000, offering strong performance plus the potential for 55mpg.

The BMW 5-series has long been the benchmark by which other sports saloons are judged. After driving one, it’s easy to understand why; no other saloon manages to shrink around its driver and feel as responsive as this one.

Yet it offers talents in other areas. Disembark from the ferry at Calais and point any 5-series to the south of France, and you’ll emerge the best part of a day later still feeling fresh and comfortable. Try that in most other cars and you’ll be an aching, weary wreck.

The interior may lack the wow factor of Audi’s A7, but it’s logically laid out and the seats are superb. There’s space for four adults to stretch out in comfort, and the boot holds 520 litres of clobber.

The pick of the range, given a maximum budget of £20,000, has to be the 530d. The straight-six diesel engine is smooth, responsive and capable of delivering good performance and impressive fuel economy – up to 51mpg. The 528i petrol model is an acceptable alternative for those who want to steer clear of diesel.

Even if you aren’t comfortable with the BMW image, we recommend you test-drive the 5-series and see what the fuss is all about.

The XF is the car that transformed Jaguar’s reputation from a maker of disappointing saloons to a company that could compete for best-in-class honours.

For the £20,000 budget, there aren’t any petrol engines available in the XF from Jaguar’s approved-used car programme. The best of the diesels is the 3-litre V6, which returns up to 47mpg and produces effortless performance.

The car’s strongest suit has to be the way it tackles the road. The XF puts the sport into the saloon, with responsive steering, surefooted roadholding and a supple ride that doesn’t go to pieces when speed builds.

Inside, it’s notable for being more modern than, perhaps, drivers were expecting. The interior features a rotary controller for the gearbox that rises from the centre console, and air vents that automatically rotate to open.

However, this isn’t the most spacious car of its kind. The back seat space, in particular, is cosy, and the boot carries 540 litres of luggage. Still, these are small sacrifices for owning a Jaguar.

The Mercedes CLS kick-started the trend for saloons designed to resemble a coupé. It brought catwalk glamour to showrooms and was well ahead of Audi and BMW, which had to play catch-up and launch cars such as the A7 and 6-series Gran Turismo.

The second-generation CLS, launched in 2012, falls comfortably within a £20,000 budget. As with some rivals, only diesel power is available in this price range, but that’s no bad thing, as Mercedes makes some of the finest diesel engines.

For the best blend of fuel economy and performance, seek out the CLS 250 CDI. It’s a four-cylinder motor, but is reasonably refined, and with more than 200bhp it can nip from standstill to 62mph in 7.5 seconds. Yet it’s capable of returning as much as 53mpg.

The rest of the driving experience is polished, with a smooth ride, impressive handling and all-round refinement on long trips.

All buyers need be wary of is that the CLS is not the most practical car of its kind, because it has only four seats and the boot is compact. However, to some this limo-like setup makes it all the more special.

“You feel a bit like Idi Amin. Or was that just me?” Jeremy Clarkson reviews the Mercedes-AMG CLS 63

What’s a humble Volkswagen Passat doing mixing it with a bunch of cars like this? It’s here because it offers drivers exceptional value for money.

For example, a 2015 Passat with four-wheel drive, a DSG automatic gearbox and a 237bhp bi-turbo diesel engine comes in under budget.

The latest Passat is impressively well made. So it can comfortably rub shoulders with an Audi, BMW or Mercedes. It’s spacious and accommodating, with a large, 586-litre boot.

And when fitted with the BiTDI engine and four-wheel drive, it’s a stealthy sports machine that can power from 0 to 62mph in 6.1 seconds and go on to 149mph. Take things more gingerly and there’s the potential to enjoy fuel economy of 51mpg.

“If ever I’m at an airport and the rental company gives me the keys to a car like this, I shall be very pleased.” Jeremy Clarkson reviews the Volkswagen Passat