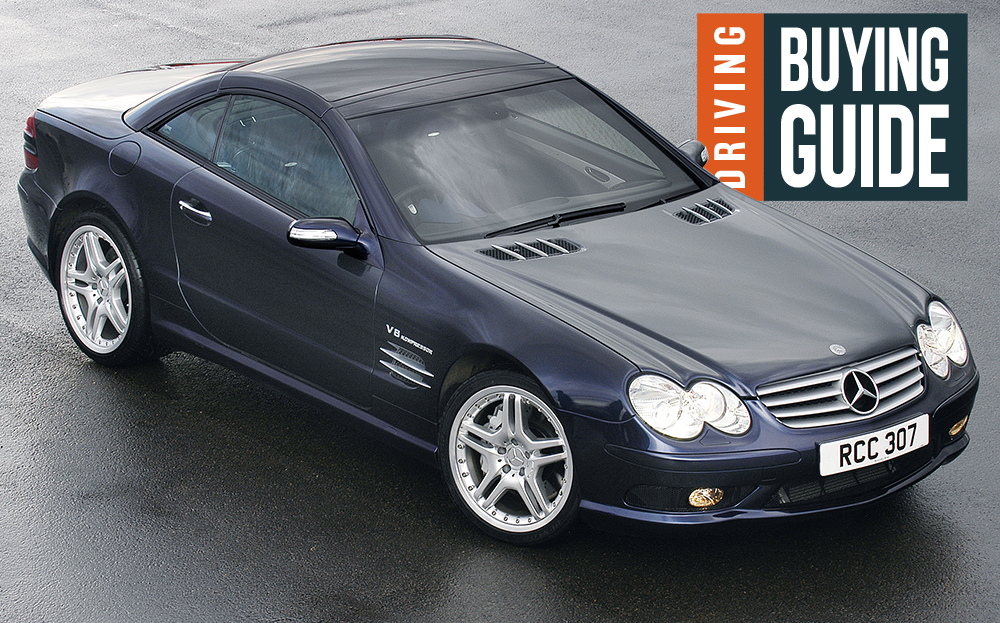 SINCE 1967, AMG has been making Mercedes go very fast indeed. Owned outright by Mercedes since 2005, the company was founded by Hans Werner Aufrecht and Erhard Melcher, a pair of engineers who worked for the German car maker and made a name for themselves by turning a Mercedes 300SE into a machine capable of winning ten rounds of the German Touring Car Championship.

The latest creation is the Mercedes-AMG C 63. Driving has put the pedal to the metal in the new model and come away deeply impressed (click this link from Sunday, March 1 for the review).

However, with such a long history behind it, there is no shortage of more affordable, second hand AMGs for car buyers to choose from. From roadsters to estate cars, SUVs (sports utility vehicles) to understated saloons, there is something for everyone in the AMG back catalogue.

Needless to say, running an AMG requires deep pockets. Fuel bills and the cost of replacing wear and tear items such as tyres, brakes and suspension parts need to be allowed for, as does routine servicing, insurance and road tax. Still, that’s nothing that couldn’t be sorted by putting aside a little every month… 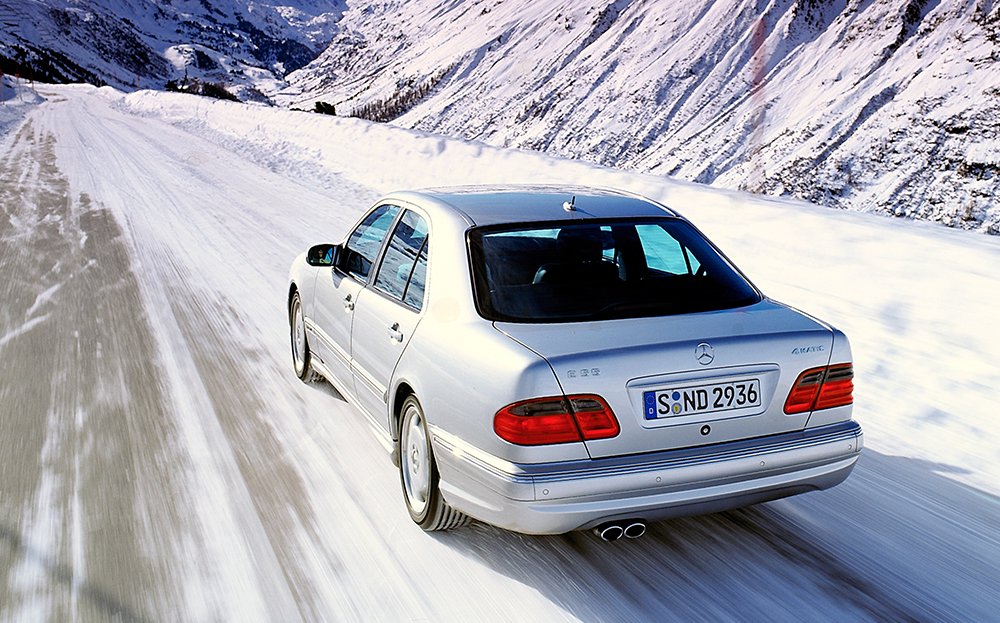 Peanuts: that’s what we’re talking here. Some cars’ tyres would cost as much to replace as buying an original Mercedes E 55 AMG. However, there’s a very good reason for that – this generation of E-class, known as W210, goes rusty like other cars get dirty, which puts off a lot of buyers.

However, fortune favours the brave, or so we’re told. Drivers who are prepared to take the plunge may find either a well-cared for example that has not suffered from rust (unlikely) or been treated where needed, or could bag a rusty E 55 for peanuts and run it into the ground with a great big grin on their face.

The root of that grin is the 5.4-litre V8 engine. It’s a naturally aspirated motor that kicks out over 350bhp, and drives the rear wheels through a five-speed automatic gearbox that offers “Touchshift”, a manual-shifting operating mode. It’s quick – 0-60mph takes under 5 seconds and the roadholding is seriously impressive for this big, heavy saloon.

In its day, the E 55’s main rival was the BMW M5, which was more entertaining to drive but lacked an automatic gearbox. Today, a used E 55 that’s in excellent condition, boasts a full service history and has under 100,000 miles on the odometer will cost around £5,000. An average condition, high mileage car will be around £3,000.

These cars are getting on for being two decades old, so suspension link bushes and ball joints will be worn out if they haven’t been replaced, the gearboxes will play up and could need replacing if the maintenance schedule hasn’t been followed. 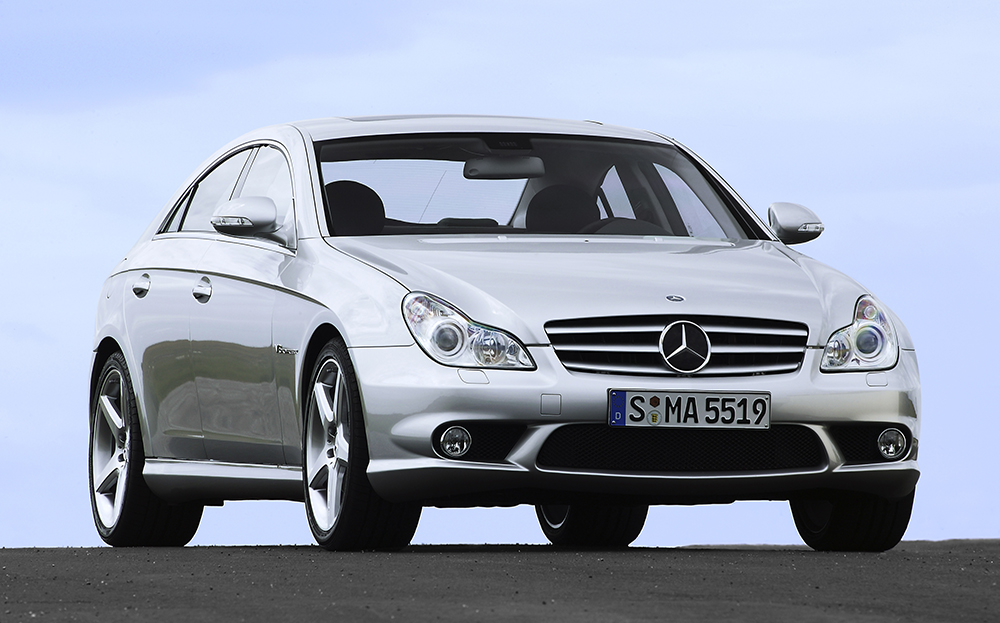 Just as a snappy dresser wouldn’t spend thousands of pounds on a suit from Marks & Spencer, so drivers who dream of owning a stylish car wouldn’t pick an E-class saloon. If you’re one of them, the CLS has got your name on it.

Its sleekly styled body mimics a coupé and stands out of the crowd, yet with AMG’s 5.4-litre, supercharged V8 engine it can also leave the crowd standing. There’s another subtle difference for choosing a CLS 55 over the E 55 on which it’s based: the steering rack’s gearing is 10% quicker than the saloon’s, which creates the impression that the car is that bit more responsive and light on its feet. Small differences, perhaps, but for those giving serious consideration to buying an AMG, they probably matter.

The CLS 55 uses a five-speed automatic gearbox, which may not sound all that impressive in an age where some cars have nine-speeds. However, because the supercharged engine generates so much torque (a peak of 516Ib ft from 2,650rpm to 4,500rpm) there’s no danger of the engine being caught napping. Push the floor-hinged throttle toward the mat and the CLS 55 gets its head down and charges toward the horizon. Mercedes claimed it could accelerate from standstill to 60mph in 4.7sec.

For all this speed, beneath the surface there’s a thoroughly practical interior. This is the sort of car that is perfectly suited to four adults stretching out in comfort as it rips across the autobahn network.

The car went on sale in 2005 and owners testify to the engine’s reliability. Beyond the obvious need to insist on a car with a full service history, and the usual wear and tear components – tyres, brakes, and suspension parts – the most common issues afflicting CLS 55s are electric problems. So check that every system, switch and gadget works correctly, as replacements are often costly.

Browse the used Mercedes CLS for sale on driving.co.uk 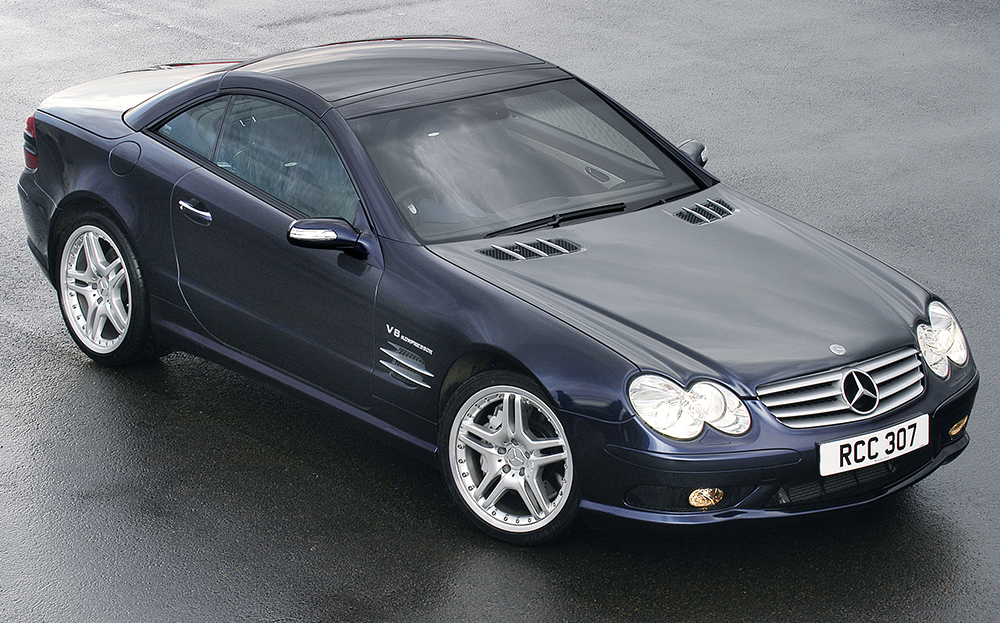 Some may think the Mercedes SL is the sort of roadster typically driven by celebrity hair dressers. But the first time you lower the roof and floor the throttle of an SL 55, you’ll think there’s a thunder storm brewing overhead; the hand built, supercharged 5.4-litre V8 engine and AMG sports exhaust bellow so loudly that the driver’s insides are literally shaken.

The engine dominates the driving experience of the SL 55. It has a huge helping of torque, so even from very low in the rev range it will pull like a strongman at a truck-hauling contest. It’s easily as quick as a contemporary Porsche 911 Turbo.

Unlike a 911 Turbo, however, it doesn’t tackle corners with true enthusiasm. It’s a competent performer that has high limits, but the sort of balance and harmony that can be found in some of the latest AMG cars is missing from this SL 55.

Does that matter, though, when the two-piece roof lets it be a snug coupé one moment, and transforms into a wind-in-the-hair roadster the next? Probably not.

The engine dominates the driving experience of the SL 55; it will pull like a strongman at a truck-hauling contest

It may have looked fantastic when closed but the folding solid roof and associated seals allowed water into the boot area, which was fixed by replacing the seals, so it is essential to ask whether that work was carried out and to look at the boot floor for signs of water and corrosion.

The Sensotronic Brake Control system, a sophisticated electronic braking system, underwent a couple of recalls, so it’s important to check the car’s history and ensure it was dealt with at the time. Suspension struts may fail, which is a costly, £1000-plus repair job, and the Active Body Control, a self-levelling hydraulic suspension system, can leak fluid. For all these reasons, it’s a good idea to have any SL 55 AMG inspected before you buy it.

Browse the used Mercedes SLs for sale on driving.co.uk 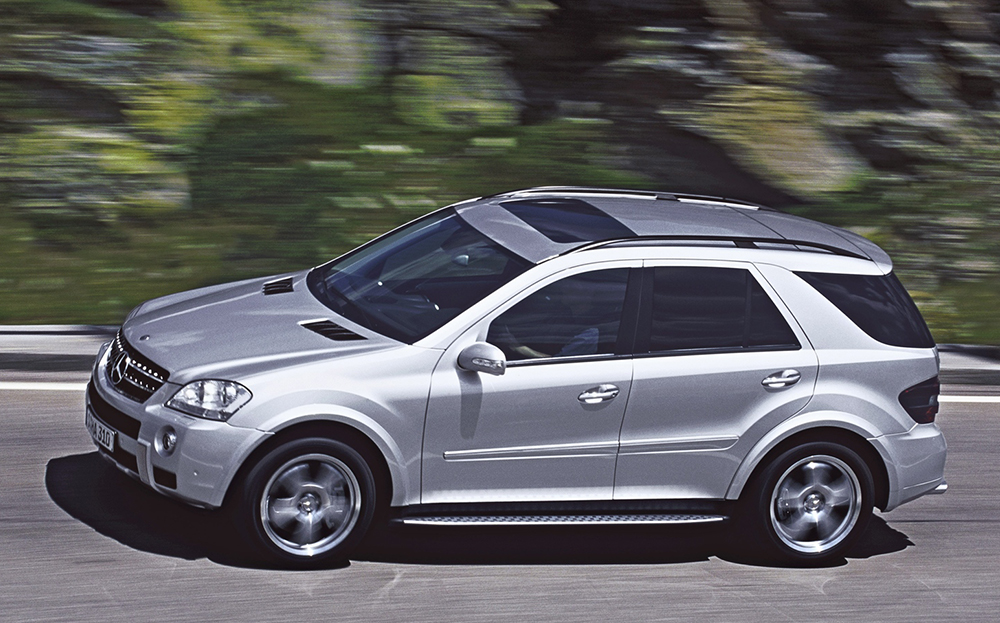 Most mornings and afternoons, the gates to schools around the country are swamped by a sea of SUVs driven by an army of mums and dads who believe bigger is better. And they don’t come much bigger than the ML 63 AMG.

This was the second SUV to undergo an AMG makeover, following in the supersize tyre tracks of the ML 55. Launched in 2006, the ML 63 featured a larger, 6.2-litre V8 engine that churned out 503bhp. Let’s put that into context, shall we? The V8 of a Ferrari F430, which was in production at the same time, produced less power. Little wonder Mercedes claimed it was the most powerful naturally aspirated V8 engine “in regular production.”

Needless to say, the ML 63 AMG is no ballerina. The engine has to drag around 2,300kg, so fuel consumption – at best, 17mpg – is something of a sore point for any owner. But the weight didn’t dent its performance noticeably; it could accelerate from standstill to 62mph in 5sec and the top speed was electronically restricted to 155mph.

The 6.2-litre V8 engine churned out 503bhp. Let’s put that into context, shall we? The V8 of a Ferrari F430, which was in production at the same time, produced less

To keep the bulky beast on a tight rein, AMG fitted it with huge 295/45 section tyres (you’ll be looking at over £200 to replace just one) and uprated the AIRMATIC-based suspension and added bespoke, AMG adaptive dampers. The system could also lower the car’s ride height at high speeds to help keep it stable. It worked, as the ML 63 AMG was surprisingly capable on a winding road.

You can buy a good condition, 2006 or 2007 model for around £17,000, and it’s sobering to think that the original owner of the car would have paid over £75,700 for it. With its complicated systems, a professional inspection of any ML63 is recommended. 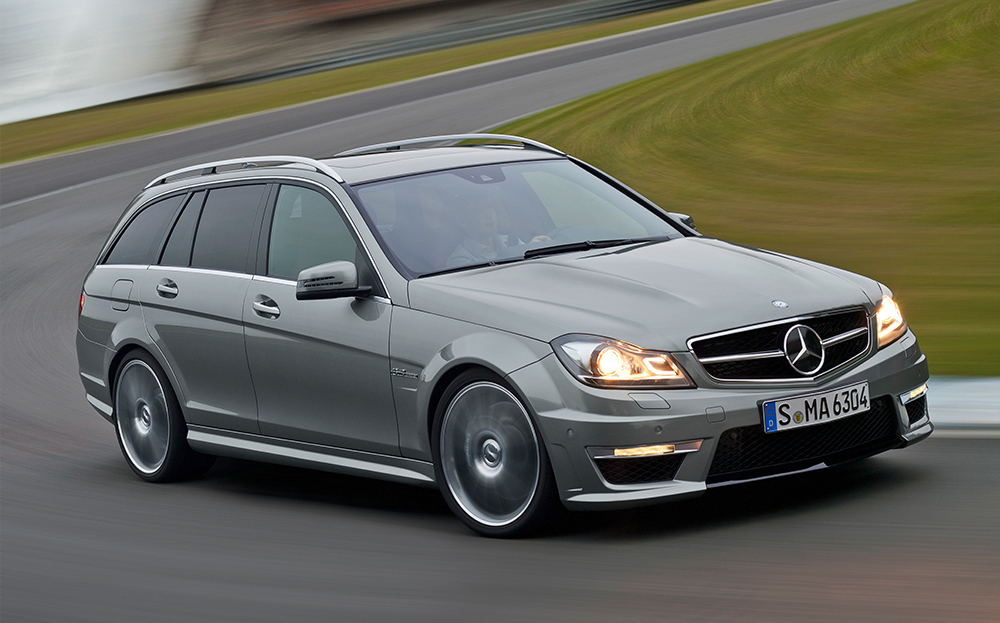 If you like to box to keep fit, prefer to catch a shark on holiday rather than lie on a beach and can light a camp fire using nothing other than sticks and a knife, the C 63 is your kind of car.

It’s a macho, hot-rod machine that was a landmark car for AMG; terrific fun to drive, it showed that AMG could give BMW’s M3 a run for its money on the road or around a race track – rarely the case with its oldest adversary – and it was the last AMG to use a naturally-aspirated V8 engine. It’s this that gives it more character than a West End show.

Secondhand Mercedes C 63 AMGs are available in a saloon or estate body style, and could be as young as a model registered in 2015. If you want to show off there is also a coupé version. However, arguably, the appeal of owning a C 63 is that it is relatively understated and only appreciated by those who know their cars. And there’s no better version for this than the estate.

From 50 paces, it could pass for a sensible, diesel-powered family estate car. But when the 6.2-litre V8 engine fires into life with a small artillery explosion from the exhaust, no one is left under any illusion that it’s nothing other than a powerful machine. It’s precise and satisfying to drive, and a complete riot on a race track when the traction and stability control systems are switched off.

From 50 paces, it could pass for a sensible, diesel-powered family estate car. But when the 6.2-litre V8 engine fires into life it sounds like there’s a small artillery explosion from the exhaust

Owners say they’re strong, reliable cars and the only concerns are fuel consumption (20mpg at best), tyre wear and the cost of replacing the high performance brake discs and pads. Because it’s a relatively young car, there aren’t huge savings to be had by buying one privately or from an independent dealer. Snap one up from a Mercedes-Benz dealer and you’ll have a car that’s been returned to full health – cosmetically and mechanically. We found a 2008, 51,000 mile estate for under £23,000, but it’s, er, white…