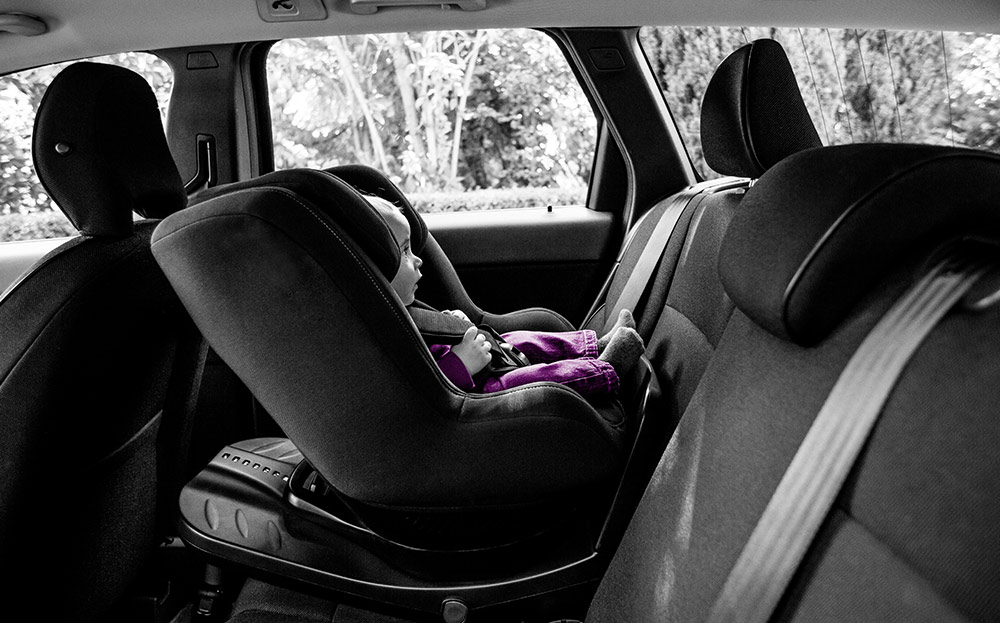 Road trips with children in tow mean one essential component will be a comfortable child car seat. For those with babies, portable baby seats that plug into Isofix bases take a lot of the stress out of the journey, as parents can leave carry it away, perhaps for a coffee break or spot of lunch, without waking the baby. Travel systems allows parents to transfer the baby from car to buggy, allowing an extended walk, for example.

But that raises an important question: for just long can a baby be left in a car seat? Is it bad for their back, for example, to leave them in the baby seat for extended periods, or dangerous in any other way? In an extreme case, could it result in SIDS (Sudden Infant Death Syndrome, aka “Cot Death”)?

What does the law say about baby seats?

Children must normally travel in a car seat until they’re either twelve years old or 135cm tall, whichever comes first.

If you have an i-Size type seat, which are categorised by children’s age rather than weight, they must be rear-facing in your car up to 15 months old.

Whatever type you use, make sure you follow the manufacturer instructions carefully during installation and you must also deactivate any front airbags before fitting a rear-facing baby seat to a front seat.

For children with disabilities or medical conditions, the same rules apply unless the child has an exemption certificate from a doctor.

What the Highway Code doesn’t say is how long you can leave your baby in the seat. So instead we look to child safety experts for advice on the matter.

The law doesn’t indicate for how long a baby can be left in a car seat and according to The Lullaby Trust, there is no published evidence that states how long babies should stay in a car seat when travelling.

However, the charity, which aims to prevent unexpected deaths in infancy and support bereaved parents, also noted research into the link between car seats and SIDS found young babies may be at risk of breathing difficulties if they travel while sitting in an upright position for too long.

For that reason, they and most child healthcare specialists agree on a rule of leaving babes in cars seats for a maximum length of two hours at a time.

That’s not the amount of time they’re in the car — that’s the total amount of time in the seat, including when attached to buggies or being carried by hand, before you should remove your baby and place them on a flat surface so they can stretch and move around.

This is because the upright position can restrict airflow and cause breathing issues. Some also believe the scrunched up position puts a strain on a baby’s developing spine.

In 2019, Consumer Reports in the USA published a report linking inclined sleep devices such as the Fisher-Price Rock ’n Play Sleeper with 54 infant deaths, which prompted parents to ask about whether it’s okay for babies to sleep in cars. They concluded that yes, you can let your baby sleep in a child seat … but only for short stretches.

“Infant car seats have been designed and tested not only to protect your baby in a collision but also to ensure that if your baby does fall asleep in the seat, the risks of slumping down, chin to chest and blocking airflow, are low.

“While the risks of sleeping on an incline are real and serious, they are vastly outweighed by the protection a well-designed and properly installed car seat offers during a crash.”

She warned, however, that car seats aren’t appropriate for extended, unobserved sleep.

While there’s undoubtedly the temptation for parents to leave their baby sleeping in a car seat at the end of a journey, it is recommended that the child be removed after two hours even if it means waking them.

Parents are also advised to check their baby regularly to make sure that the head is not slumped forward.

How long can a child be left alone in a car?

There’s no specific legal wording for how long a person may leave a child alone except that it is an offence “if it places them at risk” and parents can be prosecuted if they leave a child unsupervised “in a manner likely to cause unnecessary suffering or injury to health”.

According to guidance from the NSPCC, children under 12 are rarely mature enough to be left alone for an extended period of time and babies, toddlers and young children should never be left alone.

While it’s not advisable then to ever leave young children alone, government guidance on the matter says: “use your judgement on how mature your child is before you decide to leave them alone, for example at home or in a car.”

If, for some reason, you do need to leave a young child alone in a car for a brief period of time, make sure the car is securely parked, the keys are not accessible to the child and that the child has adequate cooling/ heating and ventilation.

According to further advice from the NSPCC:

“When left alone in a vehicle, young children can very quickly start to get anxious and distressed. Even if they’re sleeping peacefully when you leave, they could well wake up and get very upset when you’re not there to look after them. They would not be able to protect themselves in an emergency and may even try to leave the vehicle to find you.

“As children become older parents need to exercise their own judgement. If they can see the car the whole time it may be sensible depending on your child’s maturity. Every child is different and every parent knows their child’s readiness to be left in this scenario.”

Parents must also never leave children or animals in cars on hot days. Research by the RSPCA showed that when it’s 22°C outside, in a car it can reach 47°C within an hour, and though almost unheard of in the UK, in hot countries children have been known to die in hot cars; around 38 per year in America, on average.