RALLY DRIVER and YouTube sensation Ken Block has released a new video where he gets to drive the Audi RS 002, an ultra-rare secret rally prototype with 700bhp that was developed in the 1980s — but never entered into an event.

The video shows Block and his Hoonigan team visit the closed-to-the-public Audi Tradition headquarters, where a gleaming selection of the German company’s historic competition cars are lined up.

Block, a seasoned rally driver but better known for his extravagant “gymkhana” stunt videos, appears to be surprised that he’s allowed to drive some of the most special rally cars in the Audi heritage fleet. 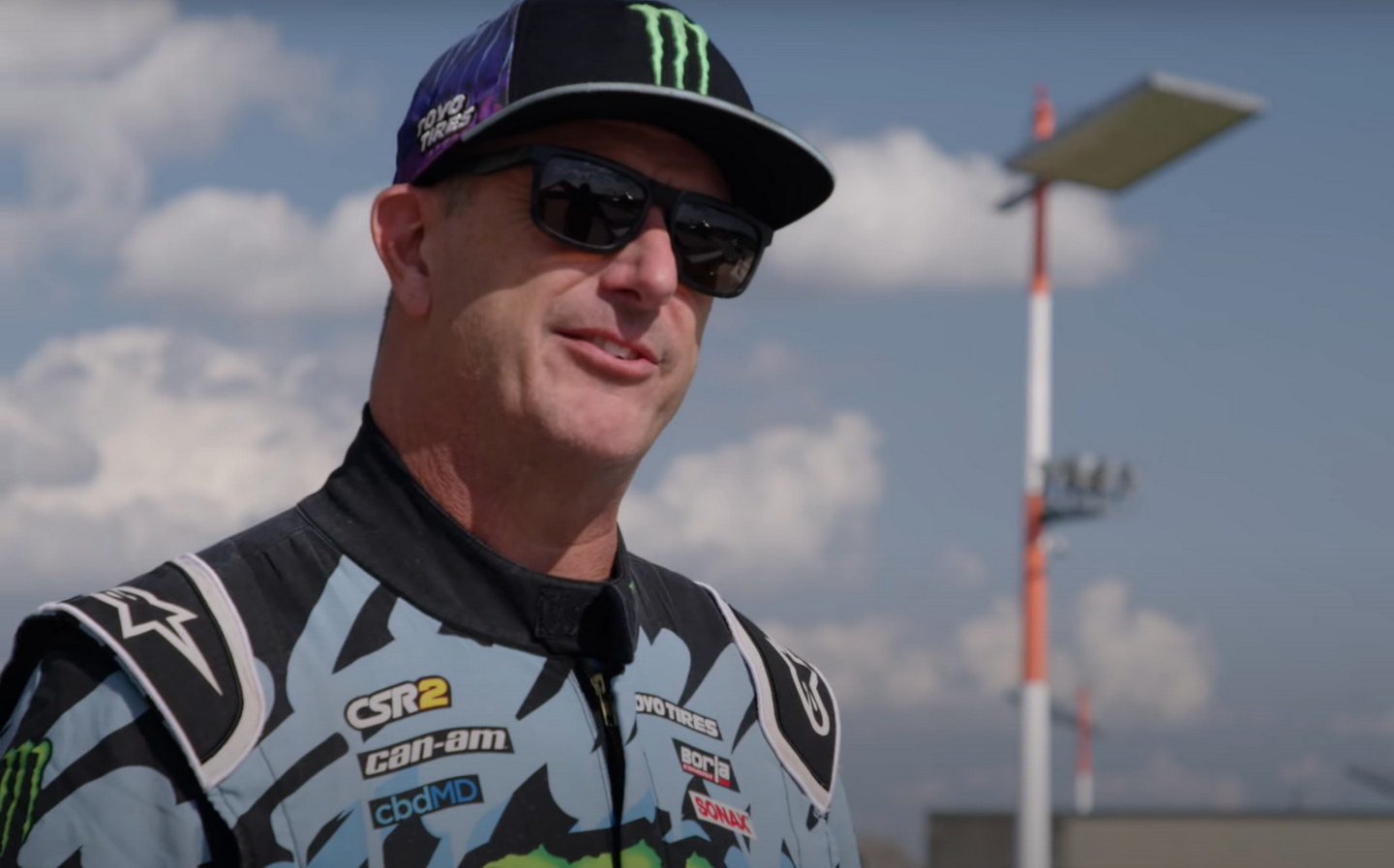 The video moves to a nearby airfield as apparently the cars are too loud to drive at the Audi Sport facility.

First up is an Audi Sport Quattro S1 E2, the final evolution of the legendary Group B rally car. It was campaigned in the 1986 season by Walter Röhrl and Hannu Mikkola, and the example Block gets to drive still has Röhrl’s name on the door.

Despite the history of the car, and its estimated value of well over £1 million, Block dons his characteristic Monster-branded race suit and helmet and is filmed driving it beyond the limits of grip on the concrete roadways surrounding the airfield. 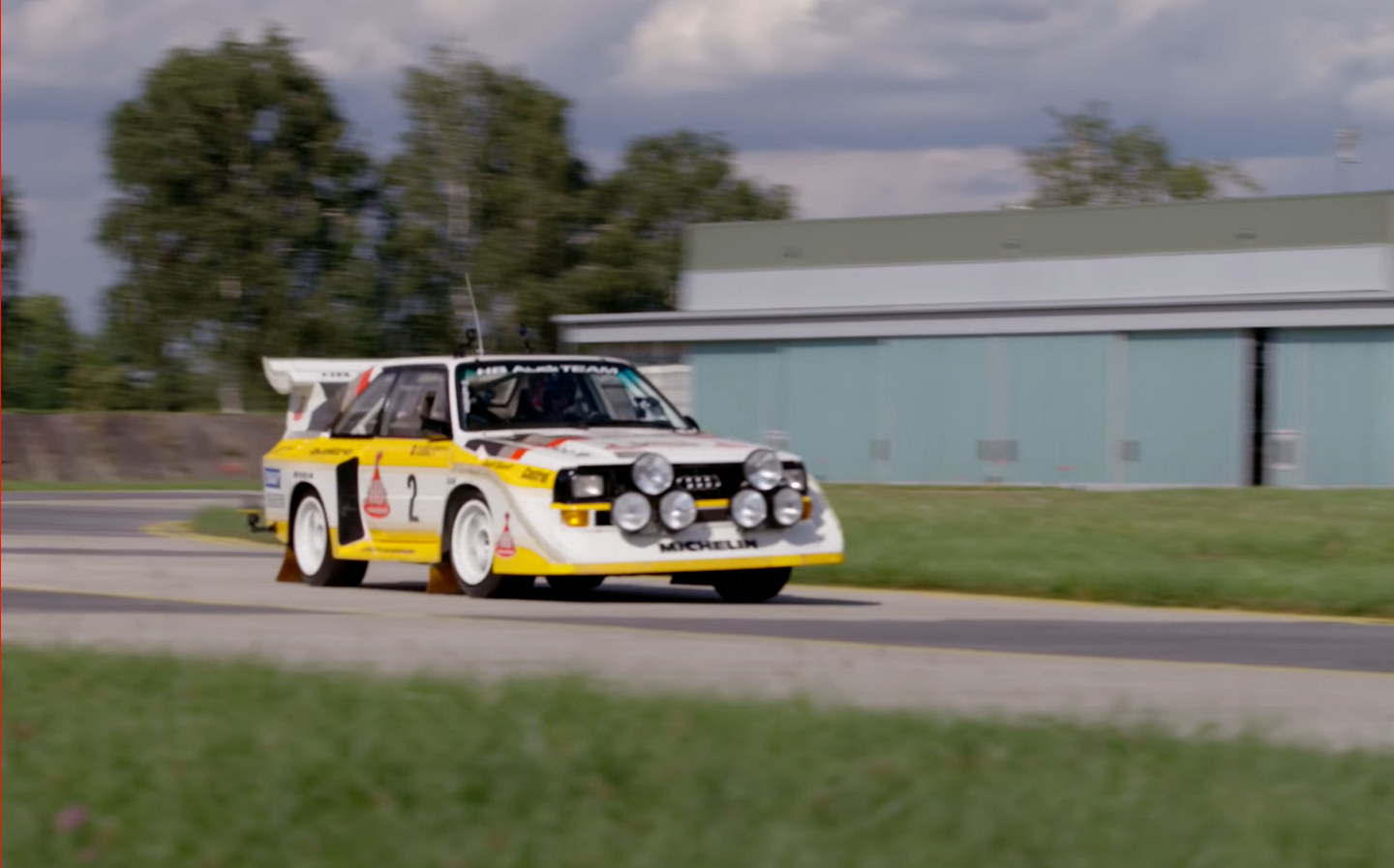 The Quattro’s turbocharged five-cylinder engine has been detuned from its heyday’s estimated 600bhp to around 300bhp so that it can be driven reliably, but that’s still clearly enough to unstick the tyres in Block’s hands. And it sounds great.

Next, Block takes the seat of a plain-looking car that, Audi badges aside, looks nothing like the Audi Quattro. Referred to as the “RS 002”, this is the sole surviving prototype of an aborted next-generation rally project from 1987.

In the mid-eighties, the Group B class rose to fame, with several car manufacturers committing large budgets to developing their vehicles. Power outputs and speed increased rapidly, but the cars were notoriously difficult to drive and crowd control along the rally stages was minimal. The result was many injuries and, following a number of fatalities in the 1986 season, the formula was shut down.

Before Group B was cancelled, work had begun on an even faster and more sophisticated class, referred to as Group S. Though it never came to light, the plan was for high-tech racers uninhibited by the same production car foundations as other rallying formulae. The Audi RS 002 was a prototype for these new rules. 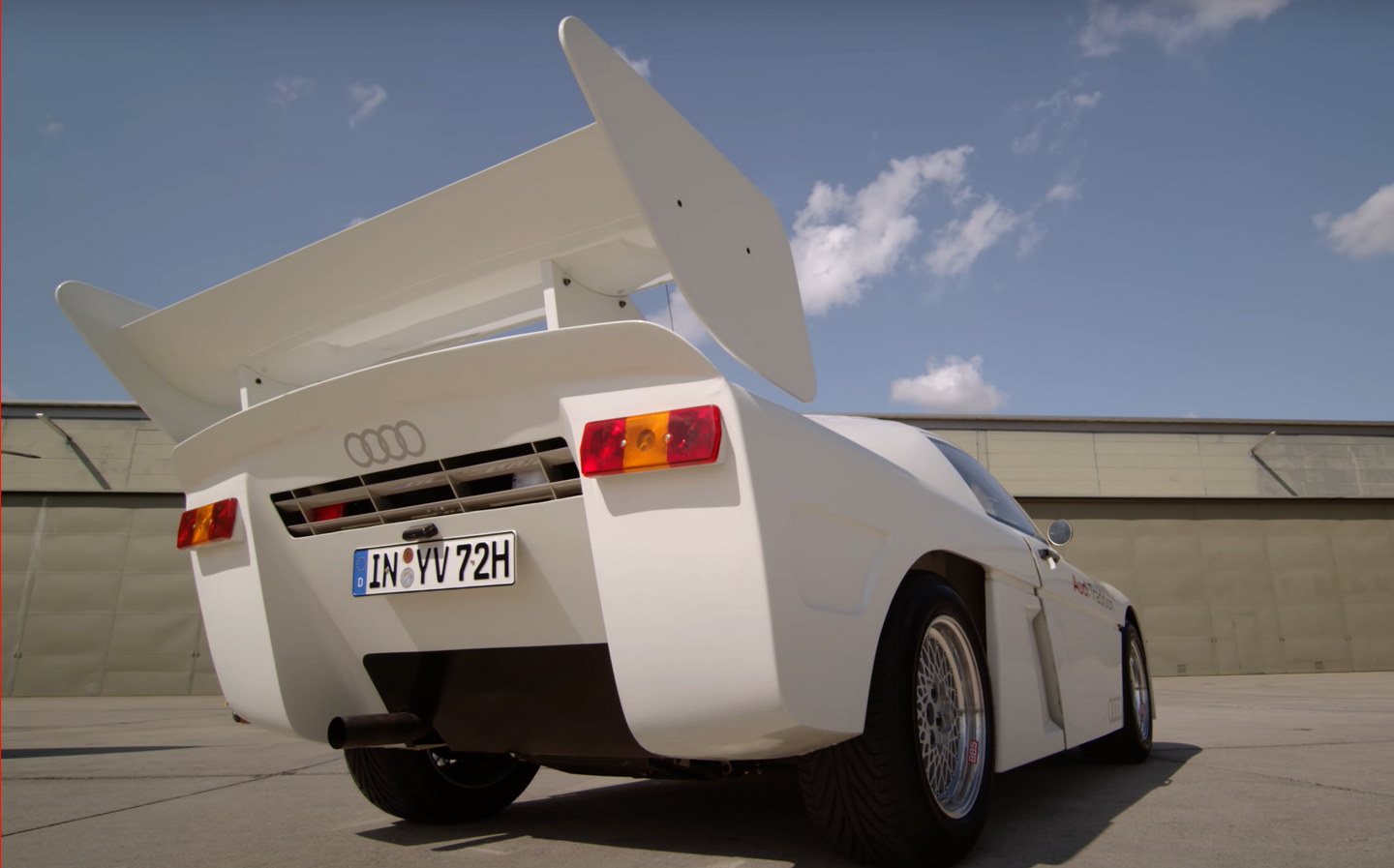 Though the RS 002 shared the Audi Sport Quattro’s five-cylinder engine, it was mounted in the middle of the car, right behind the snug two-seat cockpit. Insiders suggest that close to 700bhp was possible. The chassis was a bespoke design and Audi’s four-wheel-drive system was modified to suit the new layout.

Only three prototypes were ever made, and Block became just the sixth person to test drive the refurbished car that’s usually housed at the Audi Tradition warehouse. It last made a public appearance at the 2017 Goodwood Festival of Speed. 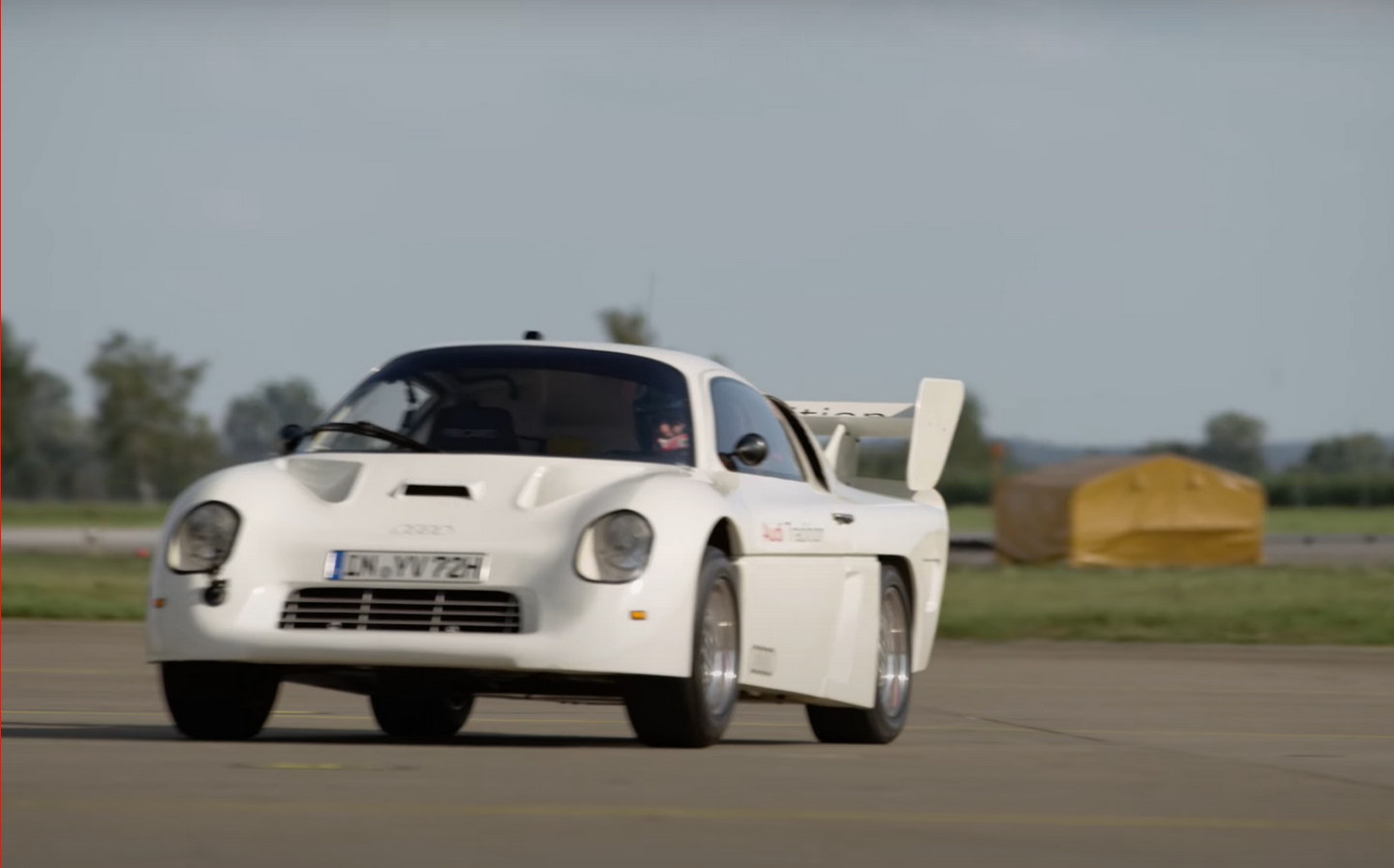 It’s obvious from the film that the RS 002 is less unruly to drive than the Audi Sport Quattro, despite flames erupting from the exhaust at times. Block confirms that it’s much better balanced on the track with lots of grip, though he sheepishly admits that he wasn’t allowed do any of his characteristic doughnuts in either car.

To make up for that, Block jumps into a new Audi RS e-tron GT electric car, turns off the traction control and drifts and slides it around the parked-up Sport Quattro in a cloud of smoke. 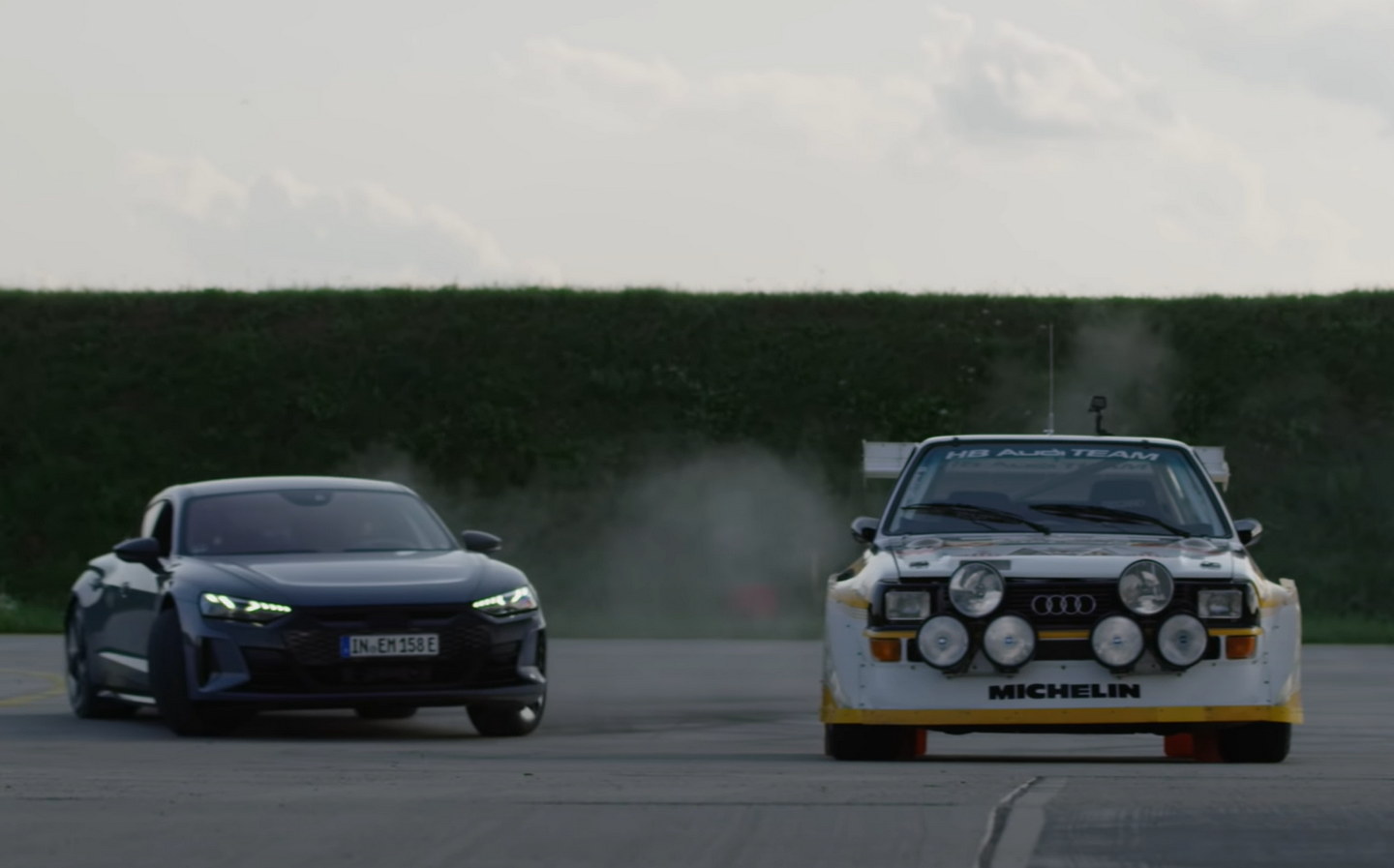 The video, Published on Block’s YouTube channel, is the first fruit of a new tie-up between the famous driver and Audi. Expect another installation very soon.