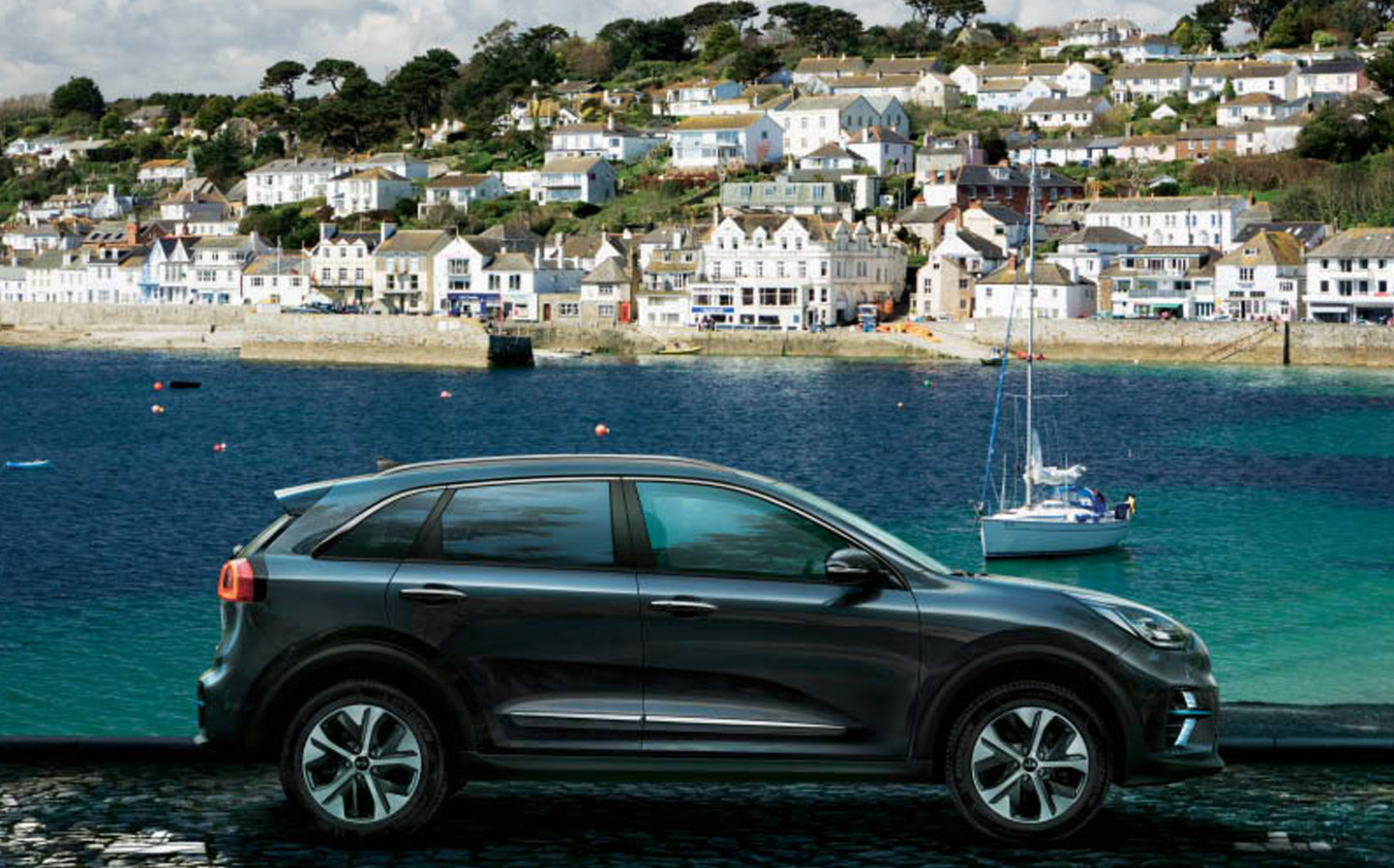 SOME of Britain’s most popular visitor destinations are found along the Jurassic Coast, where the foot of Britain dips into the waters of the English Channel. Many motorists bypass it on their way to the beaches of the southwest, eager to get to their destination in the shortest time. But hug the coastline and you will come across windswept beaches, geological treasures and countless snug villages.

To add to the excitement of experiencing uncharted waters, I’m making the road trip in an electric car. It’s a Kia e-Niro, the sort of car the government wants drivers to switch to as it tackles air pollution. My trip along the Jurassic Coast takes me from Fleet, near Weymouth, to St Mawes, just above the Lizard peninsula. It’s a meandering route with more ups and downs than the surf on a stormy day, and no doubt cynics would scof f at the idea of negotiating the twists and turns of Dorset, Devon and Cornwall in an electric car.”You’ll end up pushing it half the way,” I was told more than once by curious onlookers.

Like most electric cars, the e-Niro is assuredly brisk, powering with ease past the many tractors out at harvest time, and soothingly silent as you negotiate one sleepy hamlet after another. It’s also reckoned to manage 282 miles on a single charge of the battery. Given its size — there is as much space in the cabin as in most family cars — and keen price, it’s little wonder that this has proved to be Kia’s fastest-selling car.

This road trip starts from Moonfleet Manor. It’s a family friendly hotel, the sort of place where parents go to unwind and children are encouraged to run wild. You can row across the Fleet lagoon and make a day of it on Chesil beach, or stroll along the coastal path. There’s just one obstacle to be aware of.You’ll pass through the MoD’s Chickerell firing range — unless the red flags are flying.

Moonfleet Manor has a pair of 7kW Pod Point chargers on site. After little more than four hours — the time it takes me to have a run, a shower and then dinner — the e-Niro’s 64kWh battery is fully charged and ready for the next leg of the journey.

Setting off early the next morning, I glide silently past golden fields of corn, the hay bales stacked and glimmering. Within minutes there are steep climbs, but the e-Niro breezes up them, before man and machine pull over at a crest to take in the panoramic views over the bay.

Then it’s on through Abbotsbury, past West Bexington and Bridport, before the bright colours of Lyme Regis have you shielding your eyes. Buckets and spades, neon crabbing nets and fluorescent lilos spill out of the shop fronts, and bunting for the regatta flutters overhead. It couldn’t be anywhere but Britain.

The next stop is non-negotiable. The town of Beer is a hidden gem, of f the beaten track and under the radar of many visitors to this part of Devon. Its freestone, chalk and black flint have been mined for centuries, but today its sheltered shingle beach is what attracts those in the know.

You can buy the day’s catch from Beer Fisheries, by the entrance to the beach. Having neglected to bring a stove and some utensils for a spot of Hairy Biker outdoor cooking, I opt for local fish and chips.

By now I have faith in the car’s technology. Like most all-electric vehicles, the Kia regenerates energy as the car slows. The level of regeneration can be controlled by the driver, as in most such cars. But the e-Niro also has a clever automatic function that does everything for you, and I’ve come to appreciate that it’s generally better than me at anticipating the driving conditions and adjusting the car’s behaviour accordingly.

Just down the road is Sidmouth, its promenade lined with icecream stalls. The diving platforms out at sea look tempting but I have more miles to cover. Grand Victorian hotels give way to old thatched-roof cottages and flint walls, interspersed with a smattering of modern homes with floor-to-ceiling glass.

Brixham is the next highlight, and by the time you reach it you’ll want to stretch your legs. Head for Breakwater beach and cafe, where you can get a takeaway coffee and stroll past moored sailing boats. On the Kingswear ferry to Dartmouth, the e-Niro gets attention from motorcyclists who follow me onto the boat. They ask about the range and price — just under £33,000 after the government grant — and seem impressed. From the Dartmouth side, it’s important to take the A379 south and follow signs to Stokenham. There are rollercoaster sections of road that give California’s Highway 1 a run for its money. And along the way are beaches such as Blackpool Sands, where you could quite happily stay for a week or two.

By the end of the first day’s driving, over the course of nearly six hours the e-Niro has clocked up 130 miles yet has 190 miles of charge remaining.At this rate it may beat its official driving range.

As if the first day of the road trip hadn’t confirmed it, the next day’s driving shows what an embarrassment of riches Britain has to offer. Leaving Frogmore, I take the tidal road, passing swans and herons on the water, before pausing to sniff around the Oyster Shack, a boho joint that locals say serves scrumptious seafood.

Next comes a surprise: the best coffee I have tasted, from a campsite at Mount Folly Farm. Overlooking Bigbury-on-Sea, it has better views than the famous Burgh Island Hotel. Little wonder the families I speak with say they love the place. It’s not yet eight in the morning, and on the beach surfers are washing down their boards after a sunrise session while locals walk the beach barefoot with their dogs.

After a free ferry from Devonport (you pay on the return journey) the next possible stopover is Looe, before I pick up another ferry at Bodinnick. The short cut the ferry affords justifies the £5 fare, and the colourful houses at Fowey mean you can’t help but hand over the money with a cheery smile.

The Kia threads through the narrow streets of Mevagissey and powers on past the Lost Gardens of Heligan. The gardens were brought back to life in the 1990s and are a day trip in their own right.

The most peaceful place I encounter is Portholland. The hidden hamlet is so small that it’s not marked on my road atlas — look for Caerhays Castle to find it — and was one of the sets for Tim Burton’s film Miss Peregrine’s Home for Peculiar Children. Other than a solitary cyclist, I don’t see any signs of life.

One final stop before the finish: the Hidden Hut, on Porthcurnick beach. To find it, follow signs to Portscatho and park at the top of the hill; then take in the air and sights as you wander down to the bay. The food is always delicious — I have hake and chorizo stew — and explains why this is one of the most popular retreats on the Roseland peninsula.

By the time the e-Niro rolls down the hill and into my final destination of St Mawes, it has travelled 222 miles and still has 115 miles of driving range remaining, according to the digital dashboard, outdoing the car’s official figure. Road trips are about discovering new places, people and things. Going by electric car is also about discovering a new way to travel ?