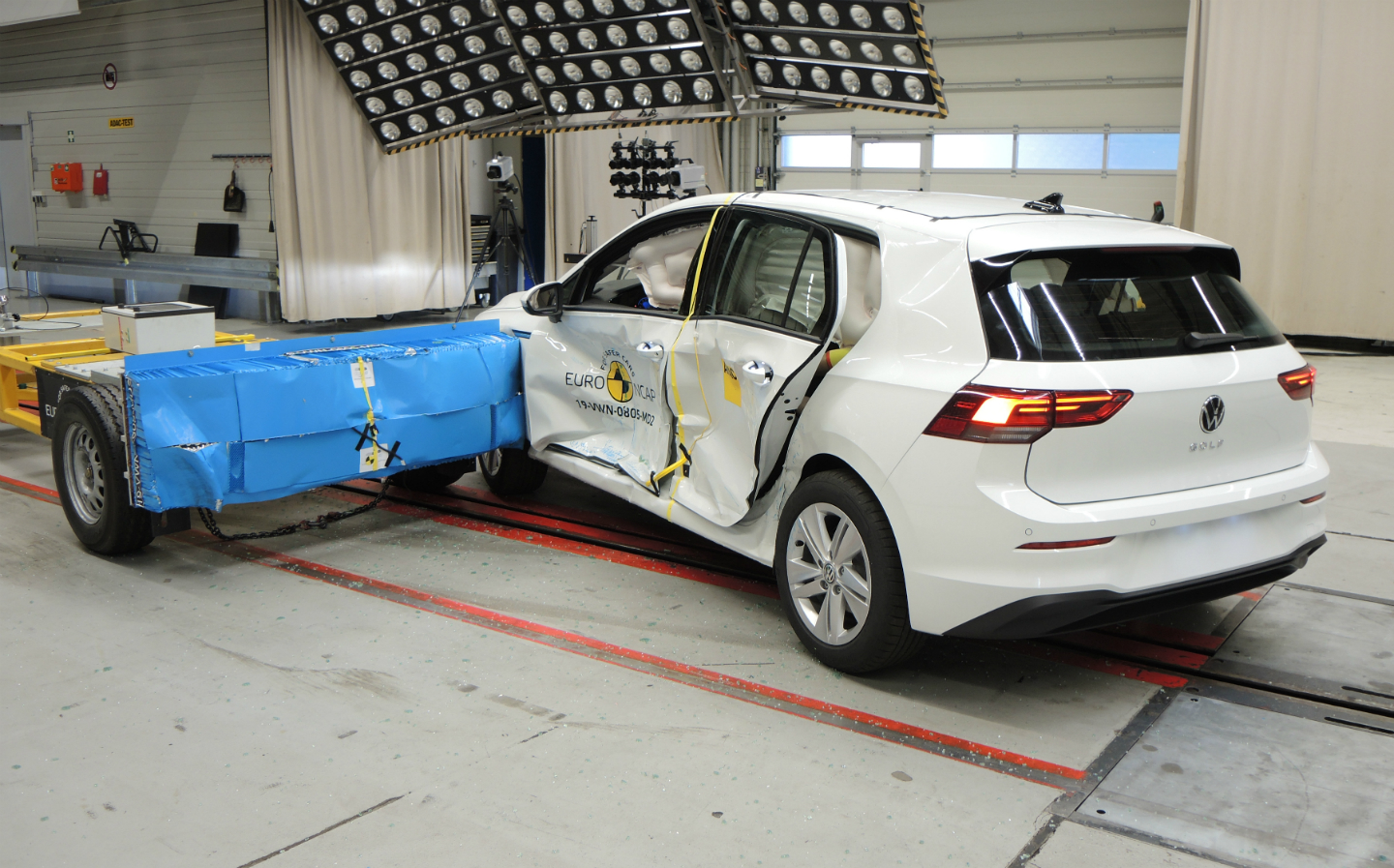 THE NEW Volkswagen Golf has been awarded the maximum five stars for safety by crash testing body Euro NCAP — even though one of the doors failed, posing a “critical ejection risk”.

In tests that involved the five-door family hatch being T-boned at 30mph, the nearside rear passenger door opened. This, according to Euro NCAP, means there is a chance occupants could be ejected from the car in the event of a real-world crash.

The Golf is the second successive Volkswagen car to experience a door failure during a Euro NCAP crash test. When the Volkswagen Sharan people carrier was assessed earlier this month, its sliding nearside rear passenger door came off after the car struck a solid pole at 20mph, in a crash designed to simulate a side-on collision with a tree or lamp post.

Euro NCAP’s secretary general Michiel van Ratingen said: “Door openings during crash are penalised in Euro NCAP since the start as they represent a critical ejection risk to occupants.  Door openings are rare nowadays and it is important that VW is committed to finding the root cause.”

Matthew Avery, Euro NCAP board member and head of research at the UK vehicle safety assessor Thatcham Research, added: “It’s the second time we have seen a door failure on a Volkswagen product in as many rating releases. Although it did not detach, and doesn’t represent a significant danger in real-world crash scenarios, this is something Volkswagen needs to address for the 2020 programme.”

“The Golf has been type approved with a standard automatic door locking function, which would prevent such door opening in real-world accidents”

Despite the concerns over the door, the assessors were extremely satisfied with the Golf’s safety credentials overall. As well as being awarded the five star safety rating overall, the VW was scored 15.5 out of a maximum 16 points in the lateral impact safety category.

Volkswagen said it is confident the issue with the Golf during the Euro NCAP tests shouldn’t affect customer cars.

A VW spokesperson told Driving.co.uk: “The Golf has been type approved with a standard automatic door locking function, which would prevent such door opening in real-world accidents. In the case of this Euro NCAP test the doors were unlocked. Nonetheless, we are looking for the root cause of this door behaviour as it has not been seen in Golf tests before.”

Volkswagen is also, the spokesperson added, working with Euro NCAP to find out why the Volkswagen Sharan’s door came off in the pole impact test.

The car maker released a statement that read: “During the Euro NCAP side-pole test, the rear sliding-door of the impacted vehicle-side detached from the car after impact, as the vehicle moved away from the pole. This door behaviour has not previously been seen on a Volkswagen Sharan or any other Volkswagen model.

“Right now we are in contact with Euro NCAP in order to find the root cause for this behaviour. We are not aware of incidences of detached sliding doors through any real-world accident research database.

“The side barrier test has also been changed, with today’s configuration leading to a higher energy transfer of around 37%.

“Euro NCAP has also increased test requirements in other areas, while also adding completely new tests. Since the Sharan’s launch, Volkswagen has updated the vehicle with regards to its safety level, driver-assistance features and so on.

“As an example, a multi-collision brake system was added as a standard safety feature two years ago. Such a system will be activated in an accident situation, applying the brakes after a first collision, in order to reduce kinetic energy ahead of a possible second impact. Seat belt reminders were also added on each of the seven seats. With that the driver is immediately made aware of any unbuckling of a rear passenger during the drive.”

VW’s recent crash test results were rounded out by a three-star rating for the Up! city car, which was hammered in the safety assist category, scoring just 55%. In 2011 the car received a maximum five stars, and at that time it didn’t have lane keep assist — a feature that is now fitted as standard — which shows just how much tougher the test has become.

Volkswagen said it was pleased with the result, despite losing two stars: “The Up! was reassessed this year and achieved three stars, as we hoped it would.

“Excellent passenger protection and lane assist installed as standard – as well as curtain and side airbags – make it one of the safest vehicles in its class. Due to the fact that the test conditions have become significantly tougher in recent years, three stars can be considered a very good rating.”

Euro NCAP tested the electric e-Up! version but the the new score also applies to the facelifted petrol-powered Up! coming in early 2020, as well as the Seat Mii and Skoda Citigo models, which are mechanically identical.