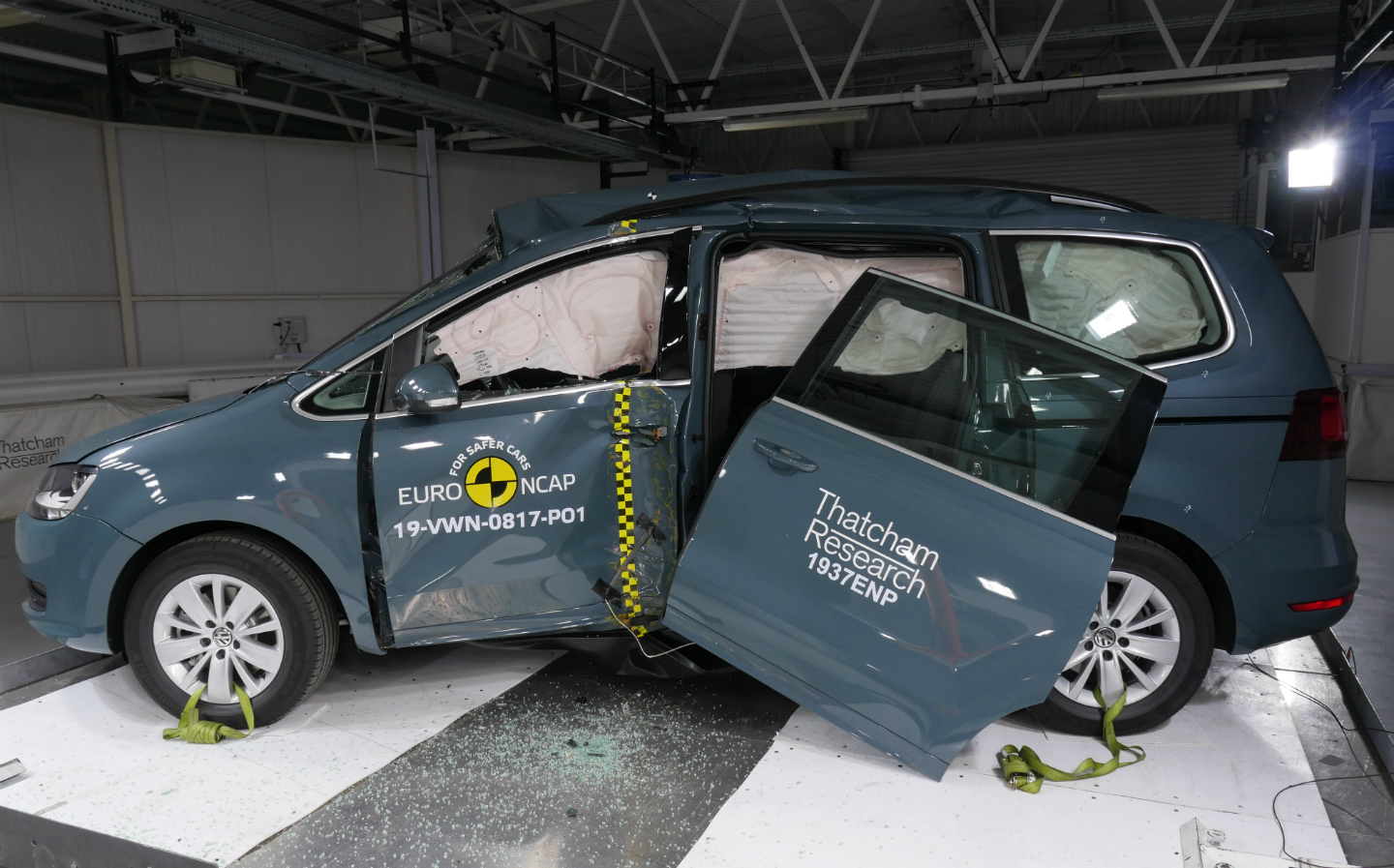 THE VOLKSWAGEN Sharan people carrier has been awarded a commendable crash test score by Euro NCAP — even though one of the car’s doors fell off during one of the tests.

When the MPV was put through its paces in Euro NCAP’s pole impact test (which is designed to simulate a 20mph side-on collision with a solid object such as a tree or lamp post), the nearside rear passenger door detached from the vehicle. This, according to the UK vehicle safety assessor Thatcham Research, presented “a risk of occupant ejection” in the event of a crash.

Even though the VW Sharan has marks docked from its adult protection rating due to the detached door, the people carrier still performed very well in the crash tests; earning 89% overall in this particular category.

A Thatcham Research spokesperson told Driving.co.uk the Sharan was only docked one point for the door coming off — meaning, had the door remained attached to the car, the Volkswagen would have been awarded 15.9 out of a maximum 16 points in the pole impact test.

Matthew Avery, director of research at Thatcham Research and Euro NCAP board member, said: “The pole crash is the most structurally invasive of all Euro NCAP crash test assessments. In the test, the Volkswagen Sharan showed a high level of protection for the occupants and the restraint systems are well-designed to prevent injuries.

“However, the instability of the side-door was of concern and resulted in points being deducted. This reflects the fact that although the overall performance of the vehicle was not compromised, there could be, in extreme circumstances, a risk of ejection.”

While the Volkswagen Sharan’s door defect was one of the more notable features from the latest round of Euro NCAP safety assessments, it wasn’t the only high-profile result. The Porsche Taycan pure-electric performance car was also given the crash test treatment, where it was awarded an impressive five-star safety rating. However, it was comprehensively outgunned in the safety assist categories by the other pure-electric car in this batch of Euro NCAP test; the Tesla Model X premium SUV (73% for the Porsche versus 94% for the Tesla).

At the other end of the scale is the facelifted Jeep Renegade compact crossover, which was only awarded a three star rating as a result of its so-so marks in the vulnerable road user protection (55%) and safety assist (58%) categories. The Jeep’s three stars also makes the Renegade the Euro NCAP’s lowest rated car for the year so far — though it’s still leagues ahead of the Fiat Panda city car, which was ‘awarded’ zero stars in 2018.

Women more likely to be injured in a crash? Not in a Volvo, car maker claims