Update, October 27, 2020: The validity of the SSC record has been called into question by a prominent YouTuber. This article has been modified slightly to reflect the doubt cast and will be further updated if and when the full facts are presented.

Update, October 29, 2020: The founder, owner and CEO of SSC North America, Jerod Shelby, has responded to doubts regarding the legitmacy of the Tuatara’s record run in a statement. While admitting that the video of the run was “substantially incorrect”, he has insisted that the record stands, and that the “numbers are indeed on our side”. Driving.co.uk will provide updates in due course.

BUGATTI is having a rough month. The marque, once known for its elegant coupés (like the Type 57S Atalante that won the design award at this years Concours of Elegance) and in more modern times for its world-beating hypercars, is awash with rumours that parent company Volkswagen Group is negotiating its sale to Croatian electric motoring engineers Rimac and is now coming to terms with more bad news: American outfit SSC (Shelby Supercars)  is claiming to have nabbed its title as the manufacturer of the world’s fastest production car.

SSC used a seven-mile stretch of closed public road near Las Vegas with its Tuatara hypercar to record a claimed two-way average of 316.11mph. That’s 301.07mph one way, and an eye-watering 331.15mph the other.

A modified version of the Bugatti Chiron SuperSport broke the 300mph barrier on VW’s test-track in Germany in August last year, reaching a speed of 304.773mph. While the Chiron used was close to a road-going version, as a “near production prototype derivative” (the production model is limited to 261mph, so that the tyres don’t explode), SSC says the Tuatara used for its record run was a production vehicle — identical to the same vehicle a customer might purchase, including sharing the same tyres and fuel.

For an official production car speed record, the car must:

– Be constructed principally for retail sale to consumers, for their personal use, and to transport people on public roads (no commercial or industrial vehicles are eligible)
– Have had 25 or more instances made by the original vehicle manufacturer, and offered for commercial sale to the public in new condition (cars modified by either professional tuners or individuals are not eligible)
– Be street-legal in their intended markets, and capable of passing any official tests or inspections required to be granted this status
– Be run in opposite directions on the same strip of land, with the final top speed being the mean of the two runs

SSC says officials were on hand to verify the records.

The Tuatara’s claimed average speed is a full 40mph faster than that set by the Koenigsegg Agera, which claimed the official title on the same stretch of road in 2017.

The record would actually be returning to Richland, Washington with SSC for the second time. Back in 2007 the car maker’s Ultimate Aero supercar recorded 255.83mph on a closed road, bringing the company the record for the first time. Irritatingly for Bugatti, it also stole its crown from one of the French brand’s models: the Veyron.

The Tuatara was driven by British 29-year old Oliver Webb, who has competed in several iterations of the 24 Hours of Le Mans, as well as in various other racing series. Despite having apparently achieved several world records in the Tuatara (the run broke other records including “Fastest Flying Mile on a Public Road” and “Highest Speed Achieved on a Public Road”), he believes it could have gone faster. 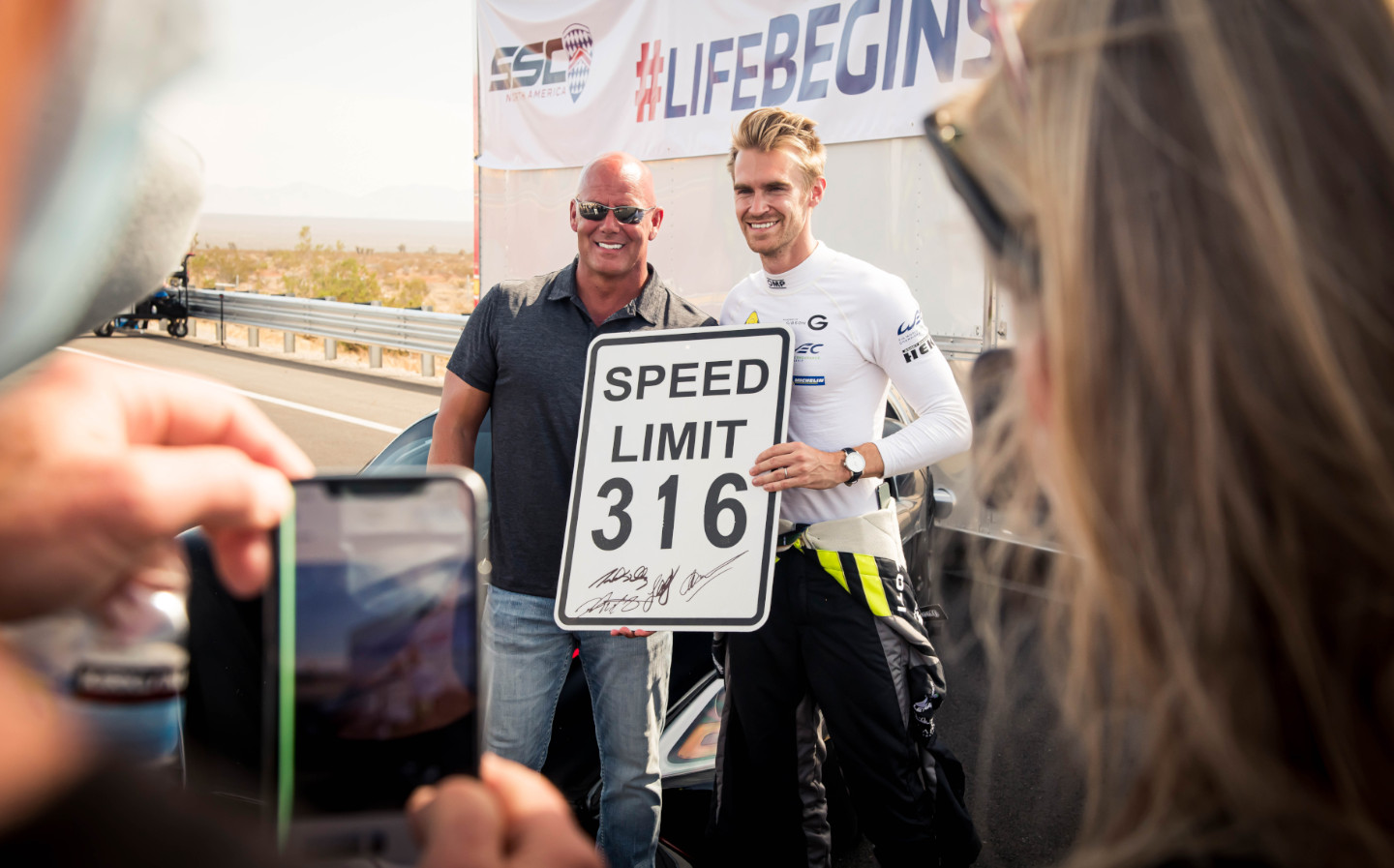 “There was definitely more in there. And with better conditions, I know we could have gone faster,” he said. “As I approached 331 mph, the Tuatara climbed almost 20 mph within the last five seconds. It was still pulling well. As I told Jerod [Shelby, founder and owner of SSC], the car wasn’t running out of steam yet. The crosswinds are all that prevented us from realising the car’s limit.”

The Tuatara achieved the top speed using that delicious, age old recipe of lightness, aerodynamics and power. The design, by Jason Castriota (of Maserati GranTurismo and Ferrari 599 renown) features a lightweight carbon monocoque and achieves an “all-time hypercar best” drag coefficient of just 0.279. That, says SSC, allowed the Tuatara to gain perfect aerodynamic balance. The powerplant, which is a bespoke 5.9-litre twin-turbo, can muster 1,726bhp.

The Tuatara may be a production car but its sales volume will be predictably limited, with only 100 models being made. Each will cost a hefty $1.6m (£1.24m).

When approached for comment by Driving.co.uk, Bugatti struck a congratulatory tone, and reminded us that it is no longer in the game of breaking records. A spokesperson said: “Records are there to be broken and we want congratulate SSC for their team’s performance – we know how much passion and efforts go into such a feat.

“Immediately after the record-drive of the Chiron Super Sport 300+ last year we said that we won’t engage in any further top speed record-seeking drives, and will be focusing on different targets instead, which we have been doing ever since.”

Guinness World Records confirmed to Driving.co.uk that it was not present at the event, adding: “We look forward to reviewing their evidence in due course.”