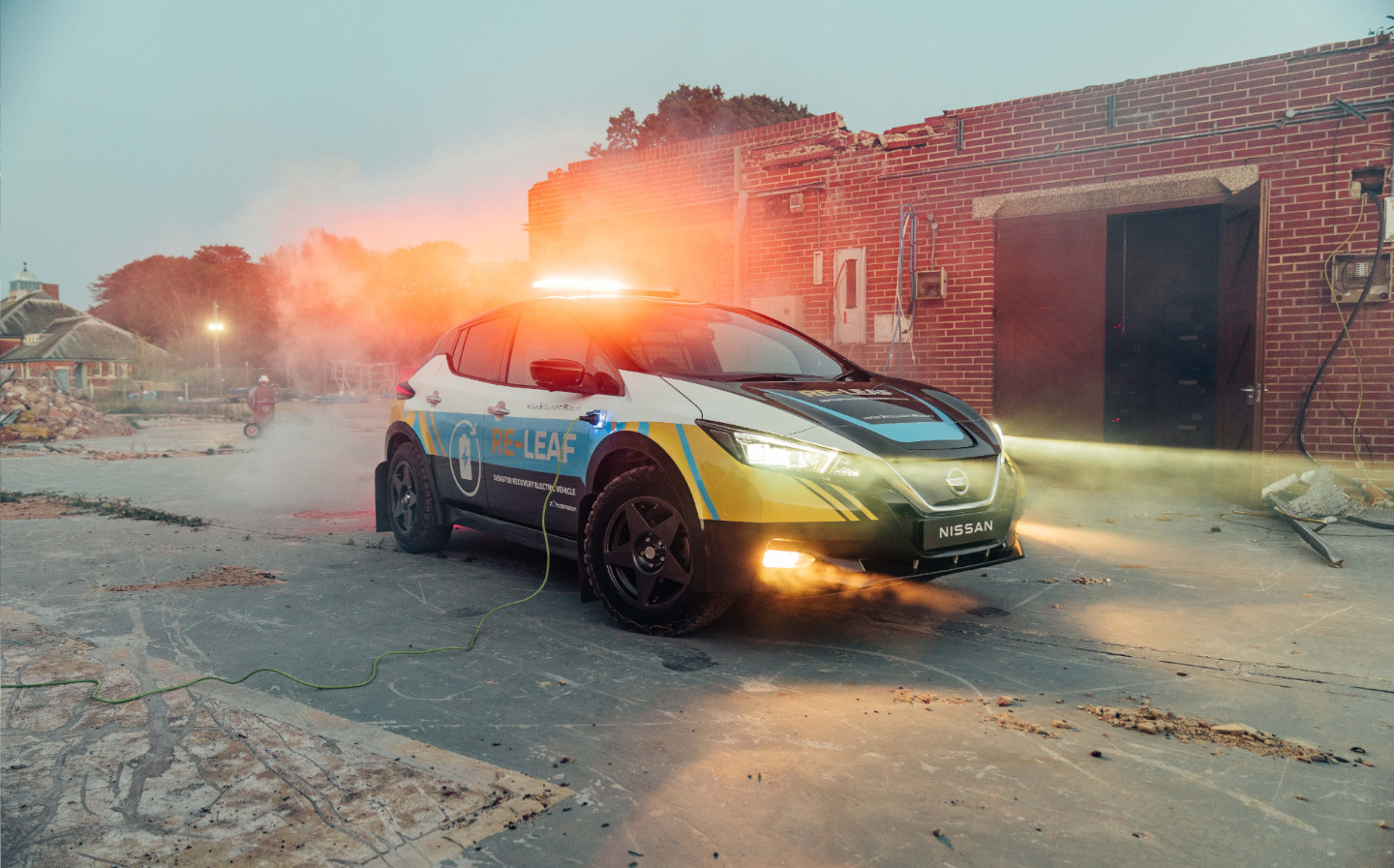 NISSAN has unveiled the Re-Leaf concept, an emergency response version of its popular Leaf pure-electric hatchback that has been modified to help it negotiate obstructed roads and provide a mobile power supply following natural disasters.

The Re-Leaf’s ride height has been raised by 70mm (to 225mm) to make it easier to reach the centre of a disaster zone, and a bespoke sump guard has been added to protect the car’s floor pan. The distance between the wheels has increased by 90mm on the front axle and 130mm at the rear, while the 17in motor sport wheels are fitted with all-terrain tyres and sit within custom wheel arches.

Once the Re-Leaf has reached a disaster zone, appliances can be connected to its lithium-ion battery pack via three sockets (two C-form connectors and one domestic plug in the boot), which acts as a 230v electrical supply. Nissan says the Re-Leaf provides sufficient power to run a jackhammer, pressure ventilation fan, medical ventilator or 100w floodlight for 24 hours.

The car’s battery can be recharged via the grid, should a viable power supply be available nearby, and as the Re-Leaf features the sames bi-directional charging capability that comes in the standard Leaf, the car could also feed power back to the electricity grid if necessary to help balance the load, as well as take energy from it.

The rear seats have been removed to create space for equipment, and a desk and 32in LED screen can be extended from the boot to form a makeshift control centre. All the modifications to the car were made by British firm RJN Motorsport, which usually builds and modifies Nissans for GT, saloon car and endurance racing.

Although the concept of an emergency response Nissan Leaf may seem more like a PR stunt than anything of practical use, the car has formed a central part of emergency response in Japan before and Nissan takes its role incredibly seriously. When Japan was devastated by a 9.0-magnitude earthquake and tsunami in March 2011, an event that killed approximately 18,000 people, Nissan used the Leaf to provide light and heat to the affected area, where around 4.8m households had lost power. The car had only been launched three months prior to the event.

Dan Cooke, operations director at Serve On, a UK-based organisation that provides search and rescue operations around the world, pointed out some of the potential uses for the Re-Leaf: “Looking back to previous scenarios we’ve dealt with, this technology could have made a real difference. For example being able to power multiple filtration devices to produce thousands of litres of drinking water – essential in our line of work.”

Nissan, therefore, is trying to realise the capability of electric cars as power sources in what is usually a 24-48 hour period of electricity blackout that occurs after natural disasters, which are the biggest worldwide cause of energy outages. Since 2011, Nissan has formed partnerships with 60 local governments to support disaster relief efforts.

The Re-Leaf, however, remains a working concept for now.

Helen Perry, head of electric passenger cars and infrastructure for Nissan Europe, said: “Through Nissan Intelligent Mobility, we’re constantly exploring ways that electric vehicles can enrich our lives, beyond just zero-emission transportation. Concepts like the Re-Leaf show the possible application of EVs in disaster management and demonstrate that smarter, cleaner technology can help save lives and provide greater resilience for the future.”