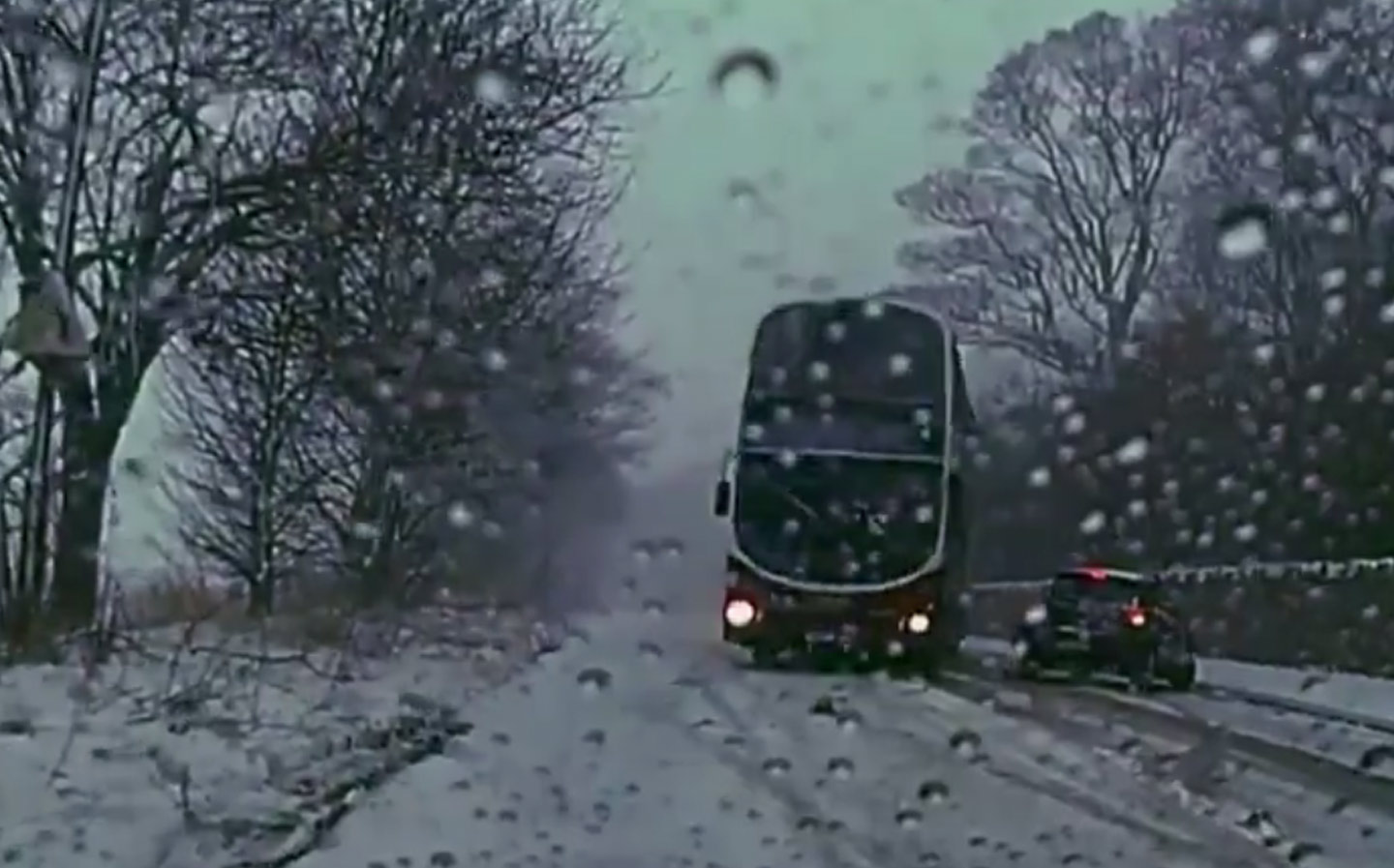 A BUS driver was caught on camera pulling off a demon bit of driving to avoid a car that had drifted into their path yesterday afternoon in Edinburgh, as the Beast from the East battered Scotland.

This driver had a near miss with a bus in Edinburgh yesterday afternoon. #Beastfromtheeast pic.twitter.com/UjiilaqozX

A Red Warning — meaning there is a risk to life — was issued for part of the country until 10am this morning. An Amber alert continues for most of the rest of Scotland and North East England.

Drivers are being told to avoid heading out on the roads. 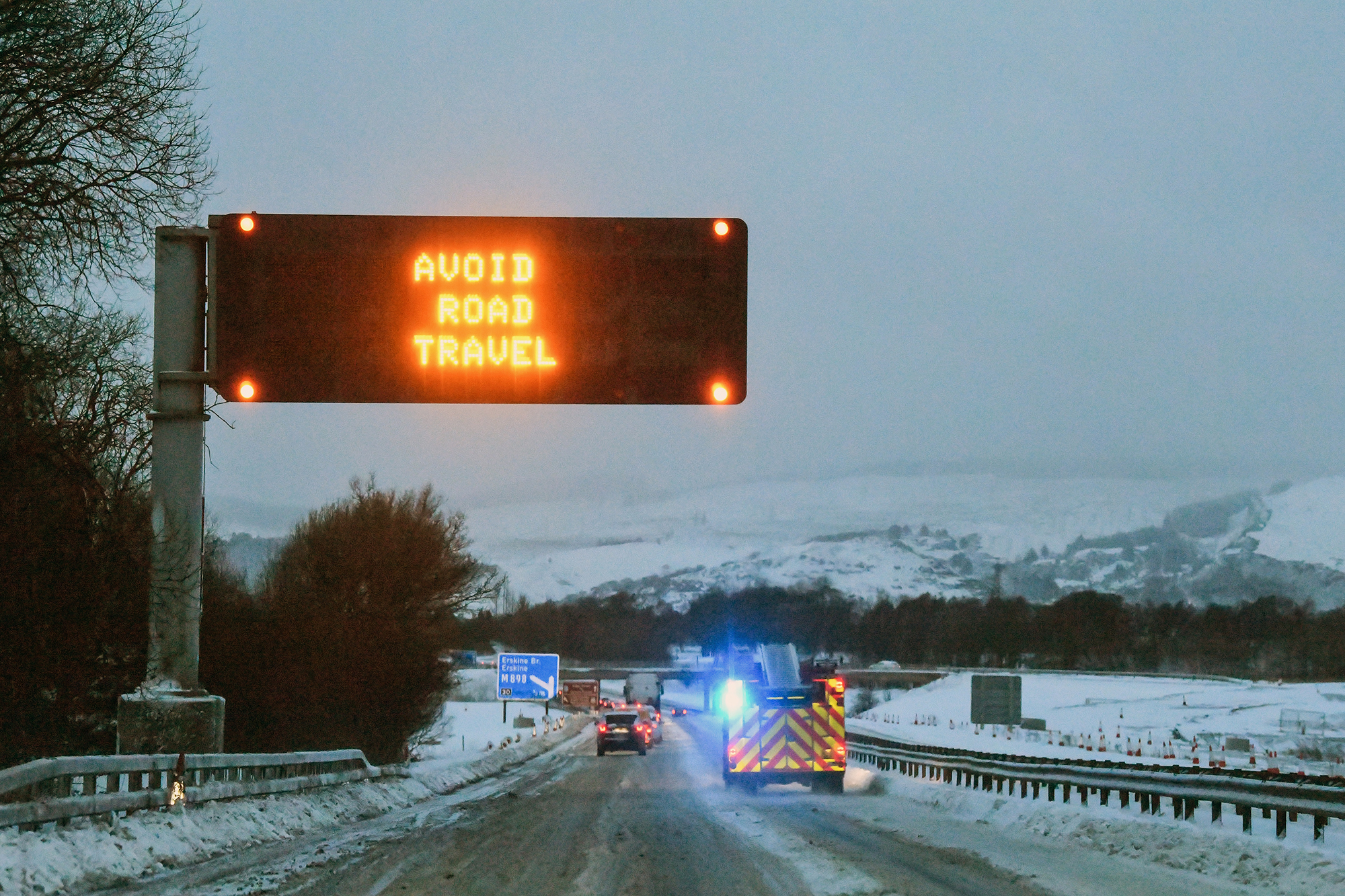 A road warning sign advising not to travel on the M8 in Glasgow, Scotland, yesterday.

The chaos isn’t limited to the north of the UK: an amber warning was upgraded to red in south-west England and South Wales, as Storm Emma approaches and the two weather fronts meet.

However, Scotland has been the worst hit so far.

More than 300 people were left stranded on the M80 motorway in Scotland last night in freezing temperatures. Nicola Lee told the BBC it was like sitting in a car park.

“We have no idea how much longer we’re going to be here for.”
Hundreds of people have been stuck on the M80 in Scotland due to heavy snow.
Nicola spoke to us at 6am this morning from her car: #BeastfromtheEast #snowday pic.twitter.com/TcfI3Ygl6m

This Ford Fiesta owner got more than he bargained for after failing to leave his car in gear on a sloping driveway.

This road in the east of England was judged a no-go area by locals:

A Forth 1 radio reporter had trouble with the blizzard conditions:

Life as a reporter during #BeastFromTheEast… ? pic.twitter.com/bQWj9gO49L

A car stuck in snow brought eh road at the Toll of Birness down to one lane this morning:

Toll of Birness down to 1 lane… car stuck in snow #aberdeenshire #beastfromtheeast pic.twitter.com/adJiAWtfBs

Some were able to see the lighter side of things. One Twitter user in Ireland was amused by the presence of an ice cream van outside his house:

Only in Ireland ? #beastfromtheeast pic.twitter.com/9lZt3d2Upa

Some ditched the car for skis during the morning commute: 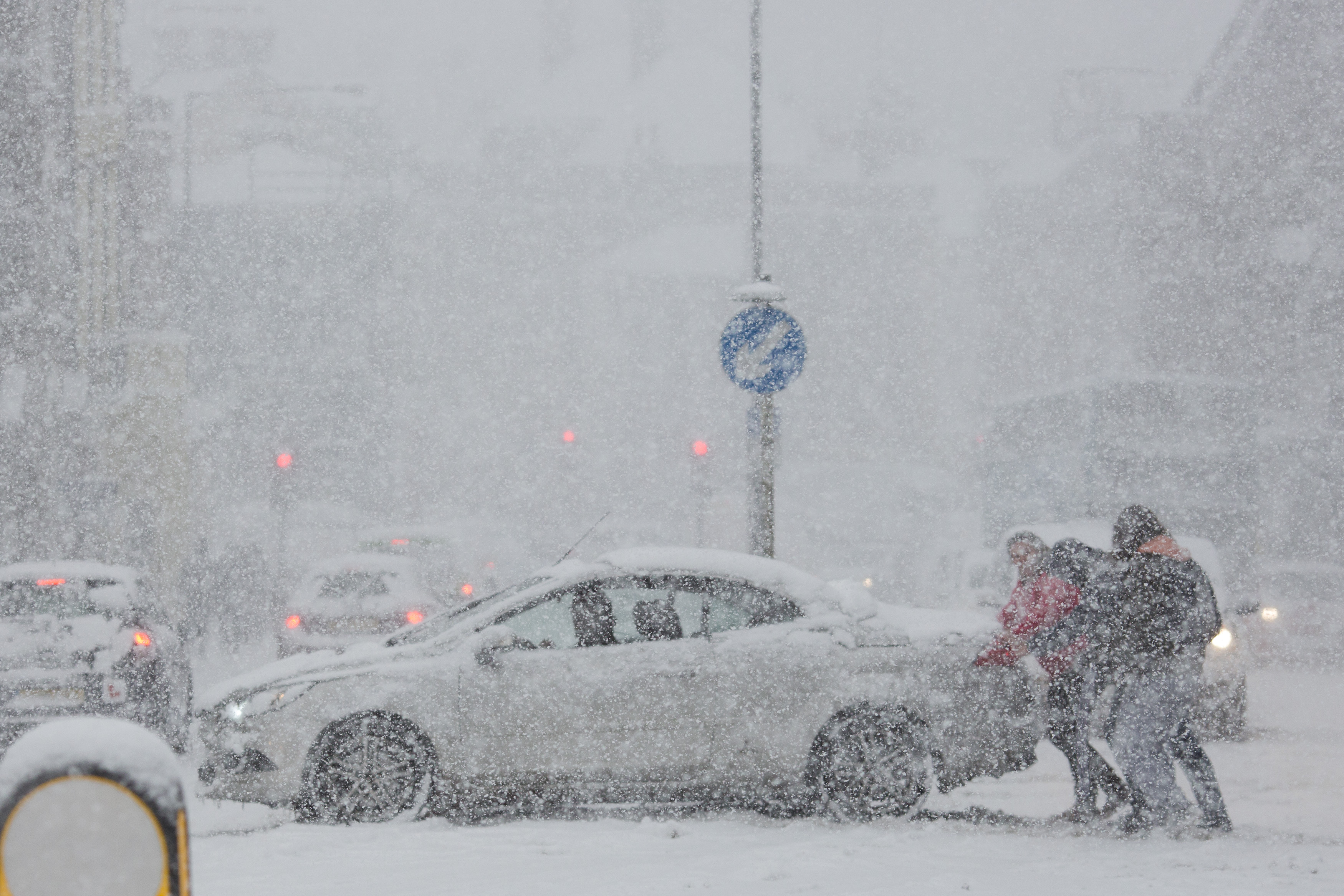 People help push a car that got stuck in the snow in Rochester. 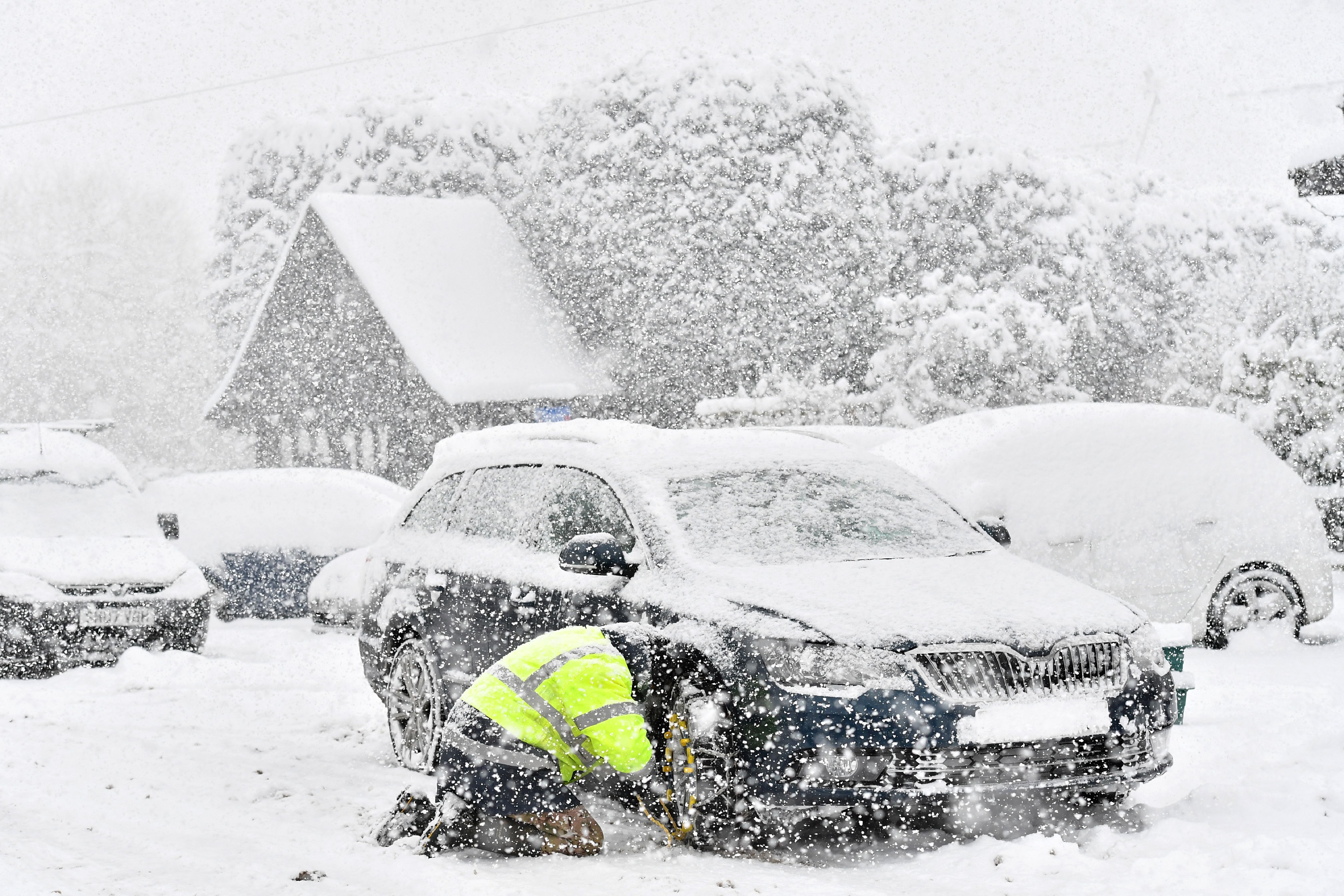 A man fits snow chains to his car in the village of Brenchley in southeast England. 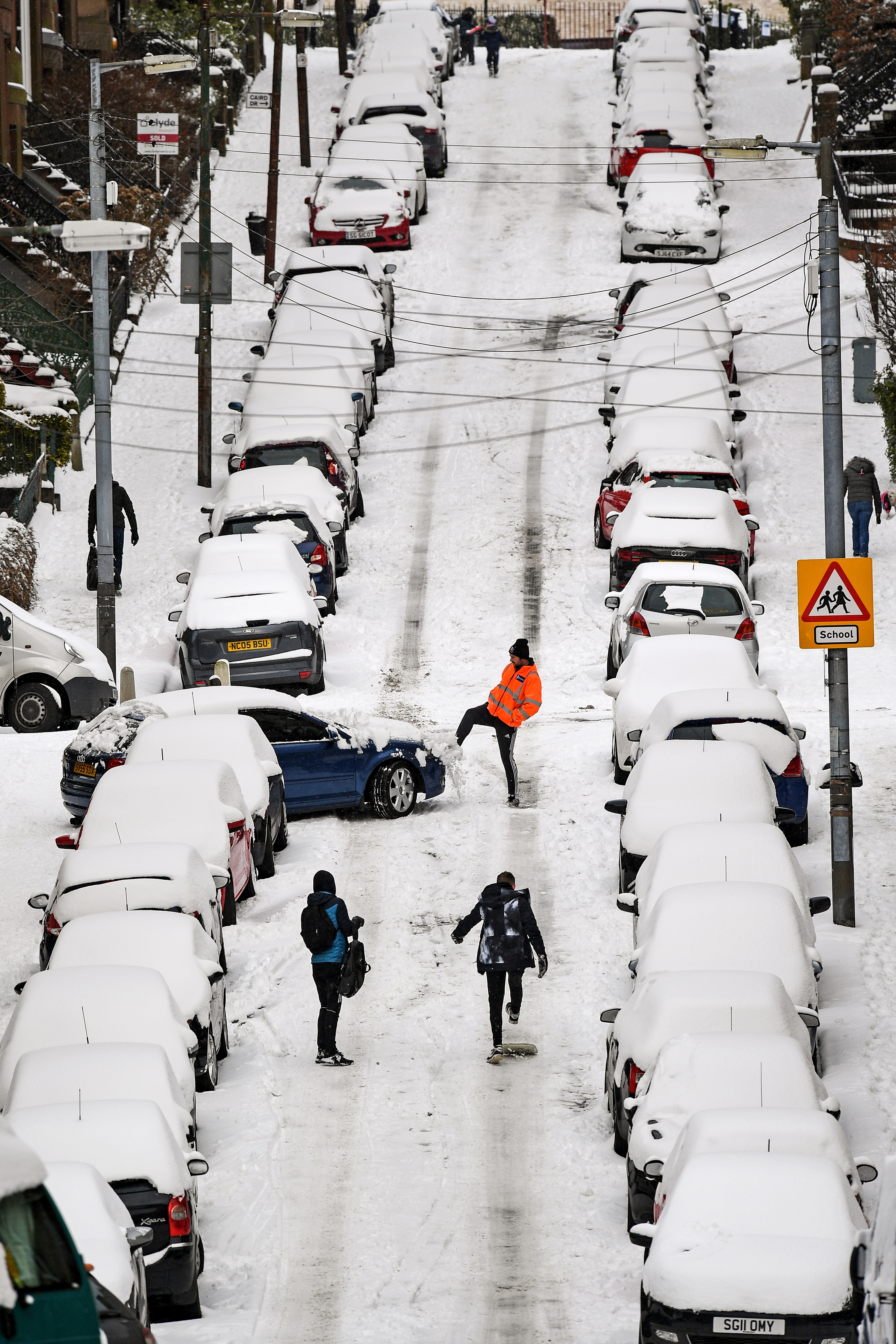 Members of the public make their way through the snow yesterday on Gardner Street, in Glasgow, Scotland. 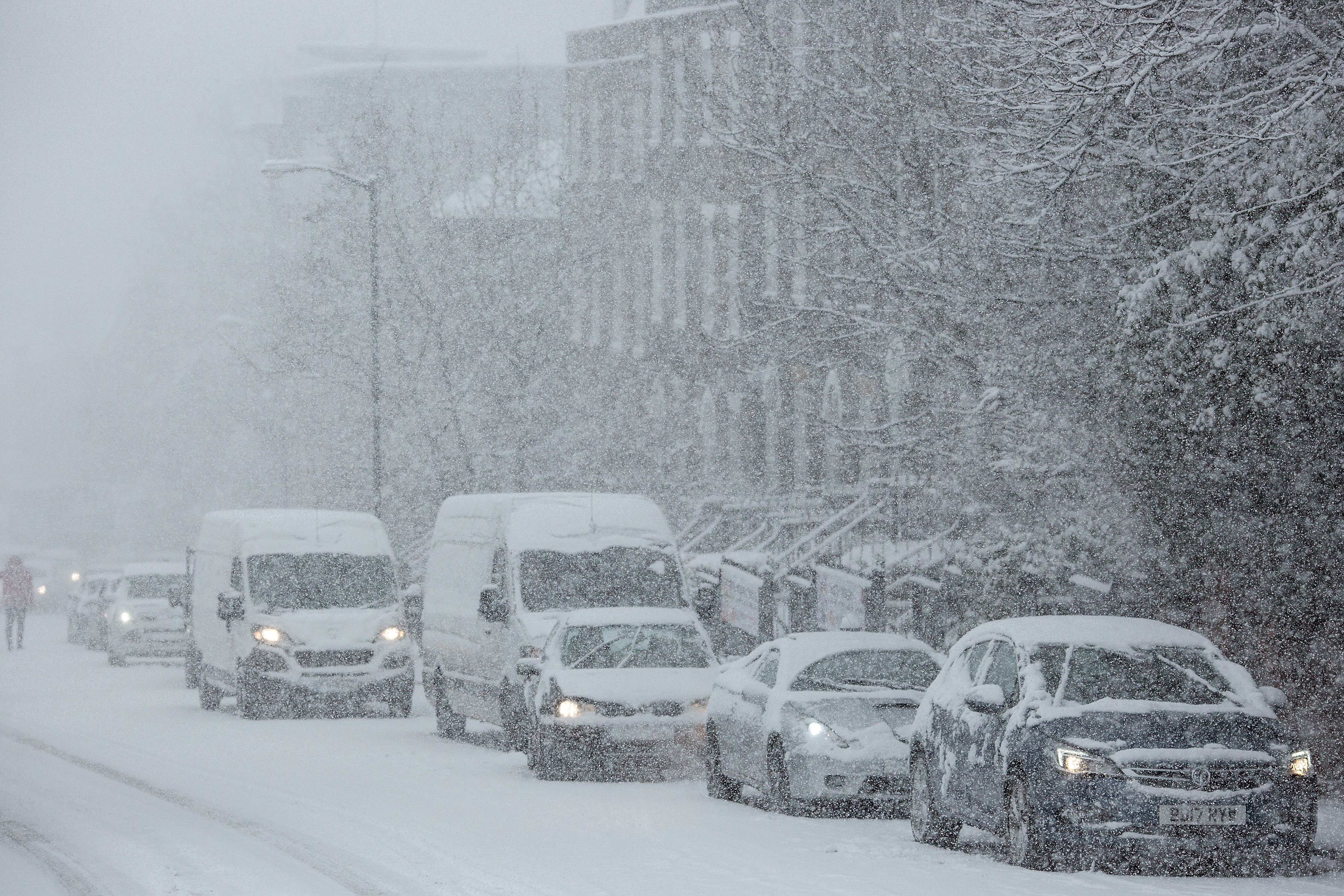 Traffic struggled up a hill in Rochester yesterday. 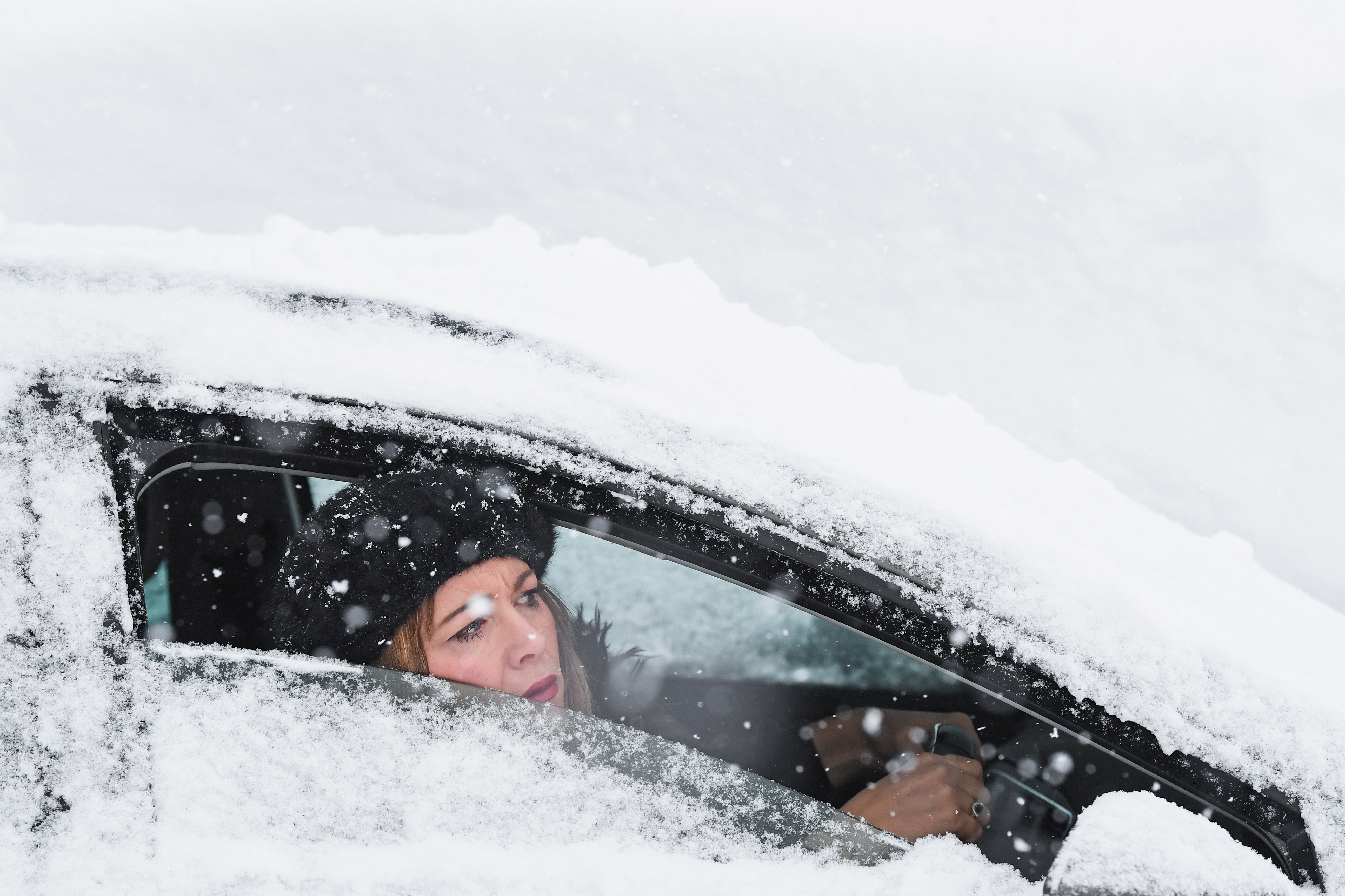 A woman ventures out onto the roads in Alexandria, Scotland, this morning. People have been warned to not to make unnecessary journeys. 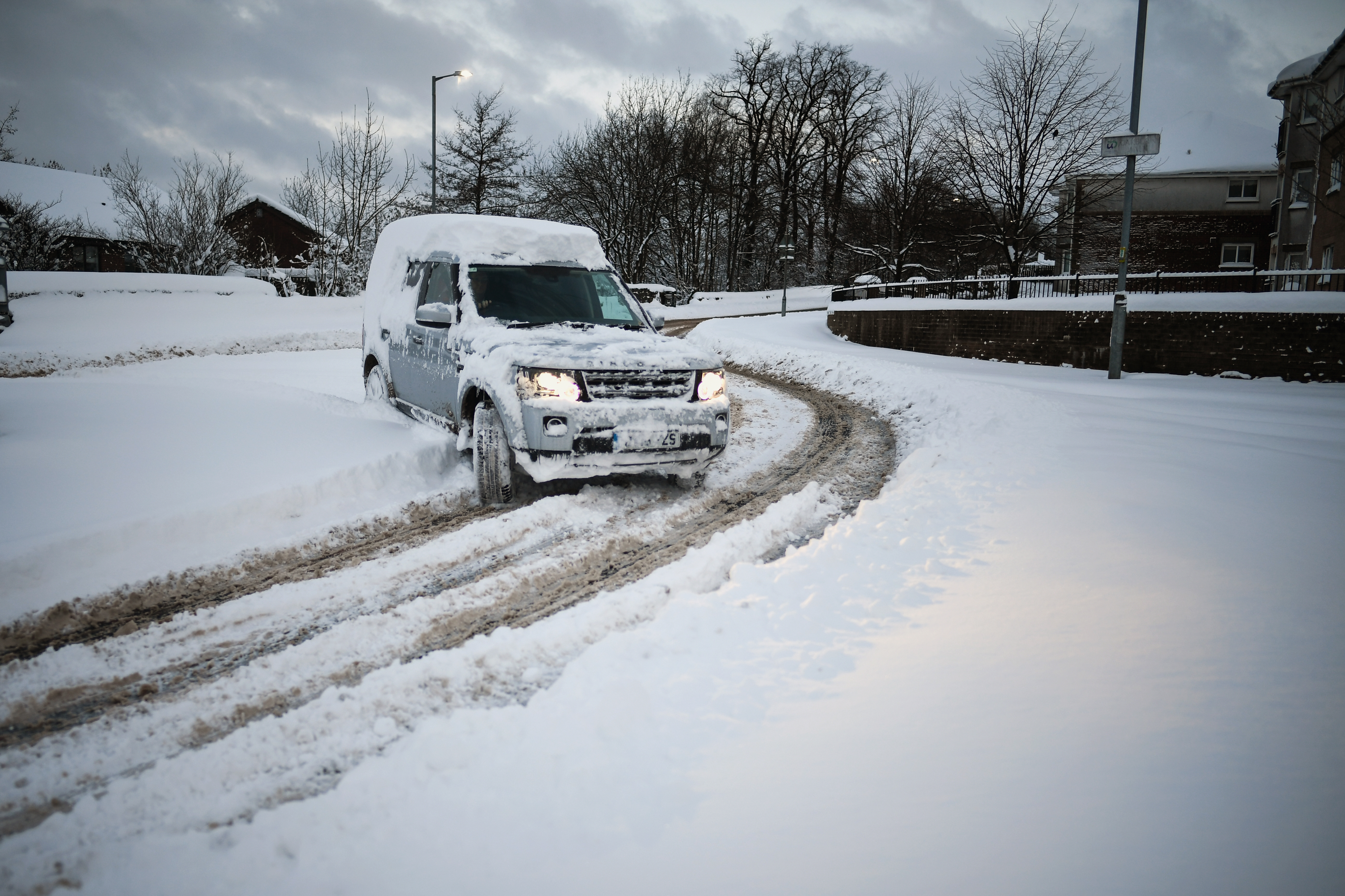 Even a Land Rover can struggle: this 4×4 was captured this morning making its way along the A813 in Alexandria, Scotland. 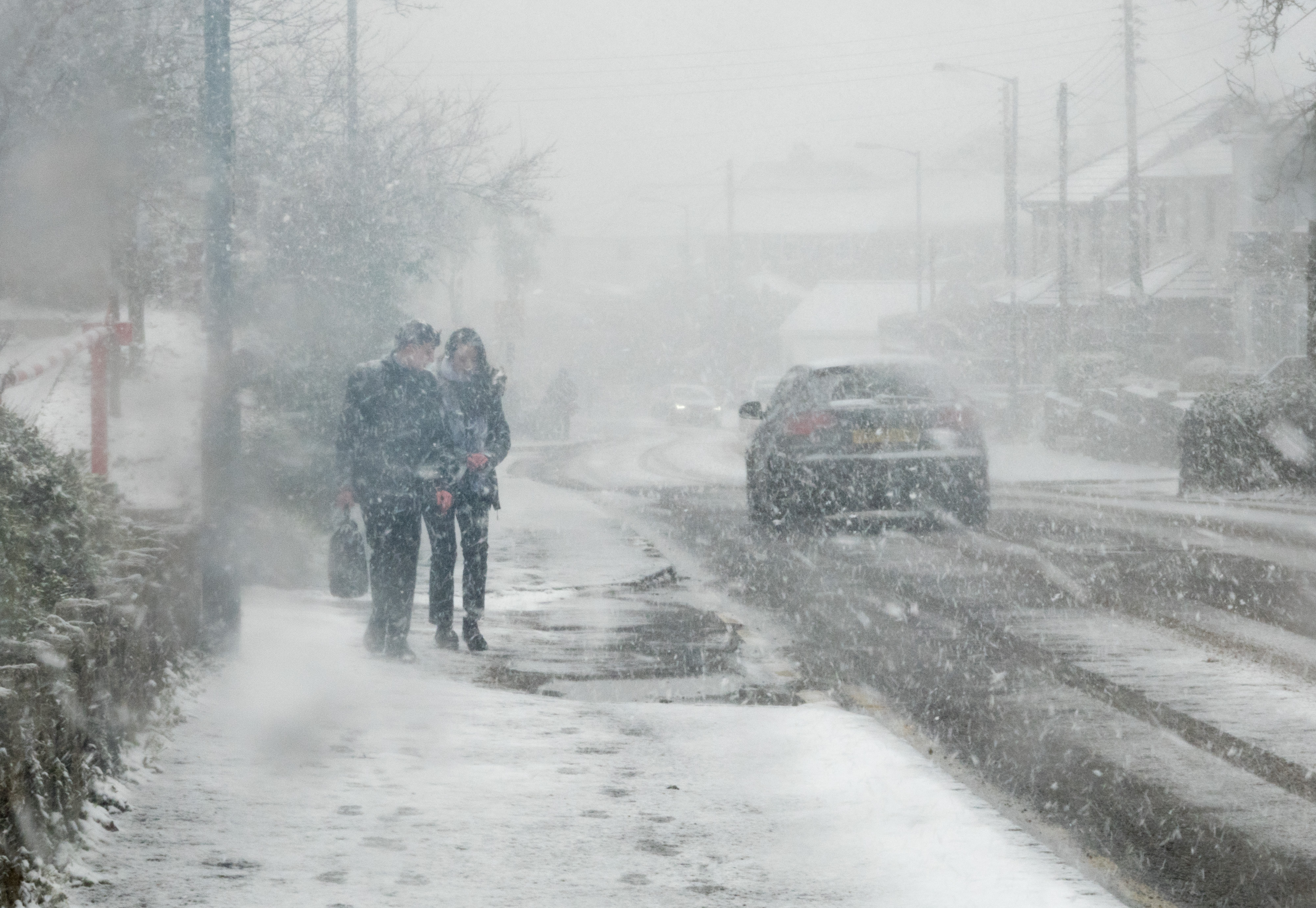 Some preferred to walk as heavy snow arrived in St Ives, Cornwall yesterday. 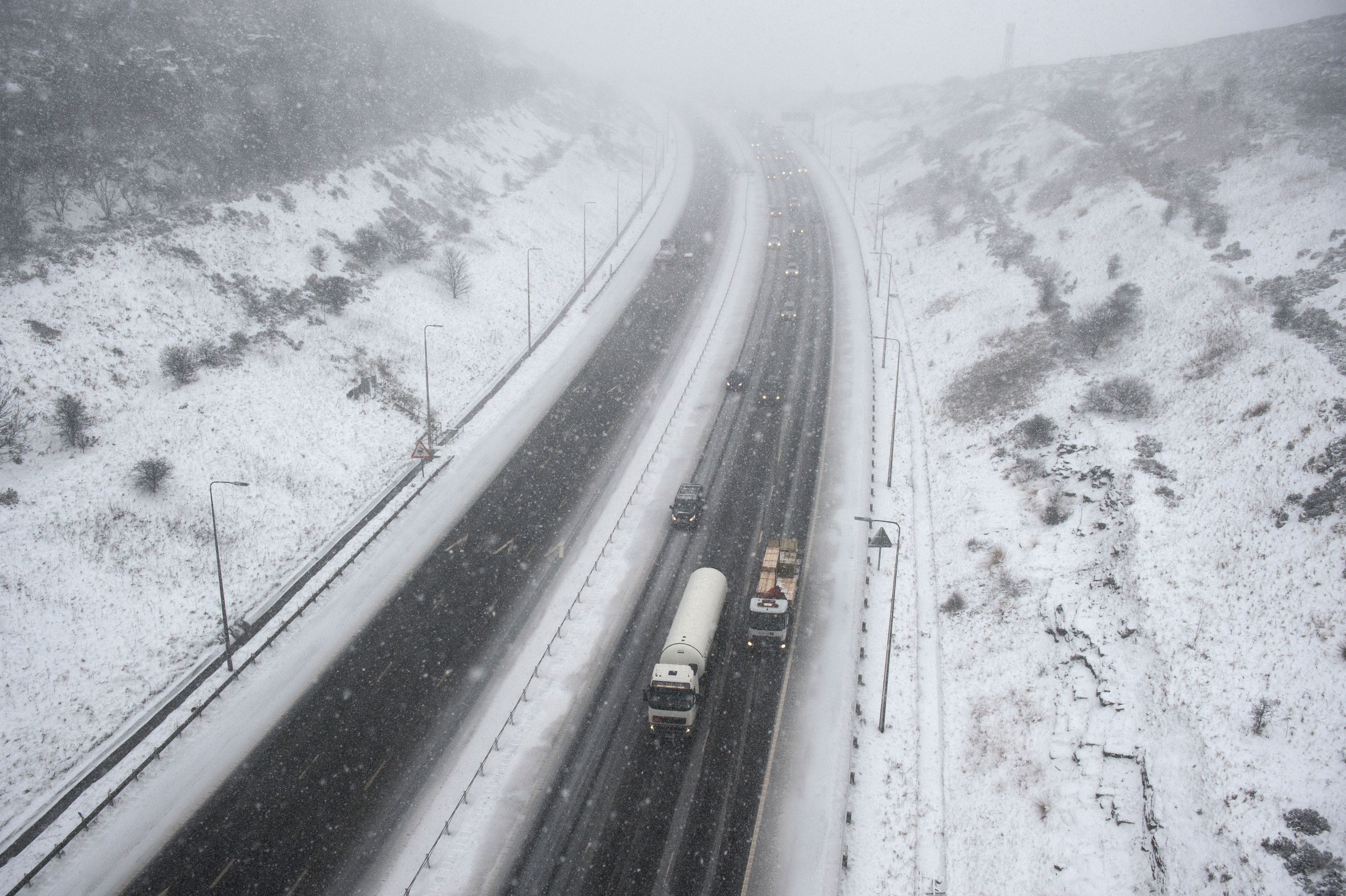 Vehicles negotiate the M62 motorway during a heavy snow shower near the village of Ripponden, northern England, yesterday. 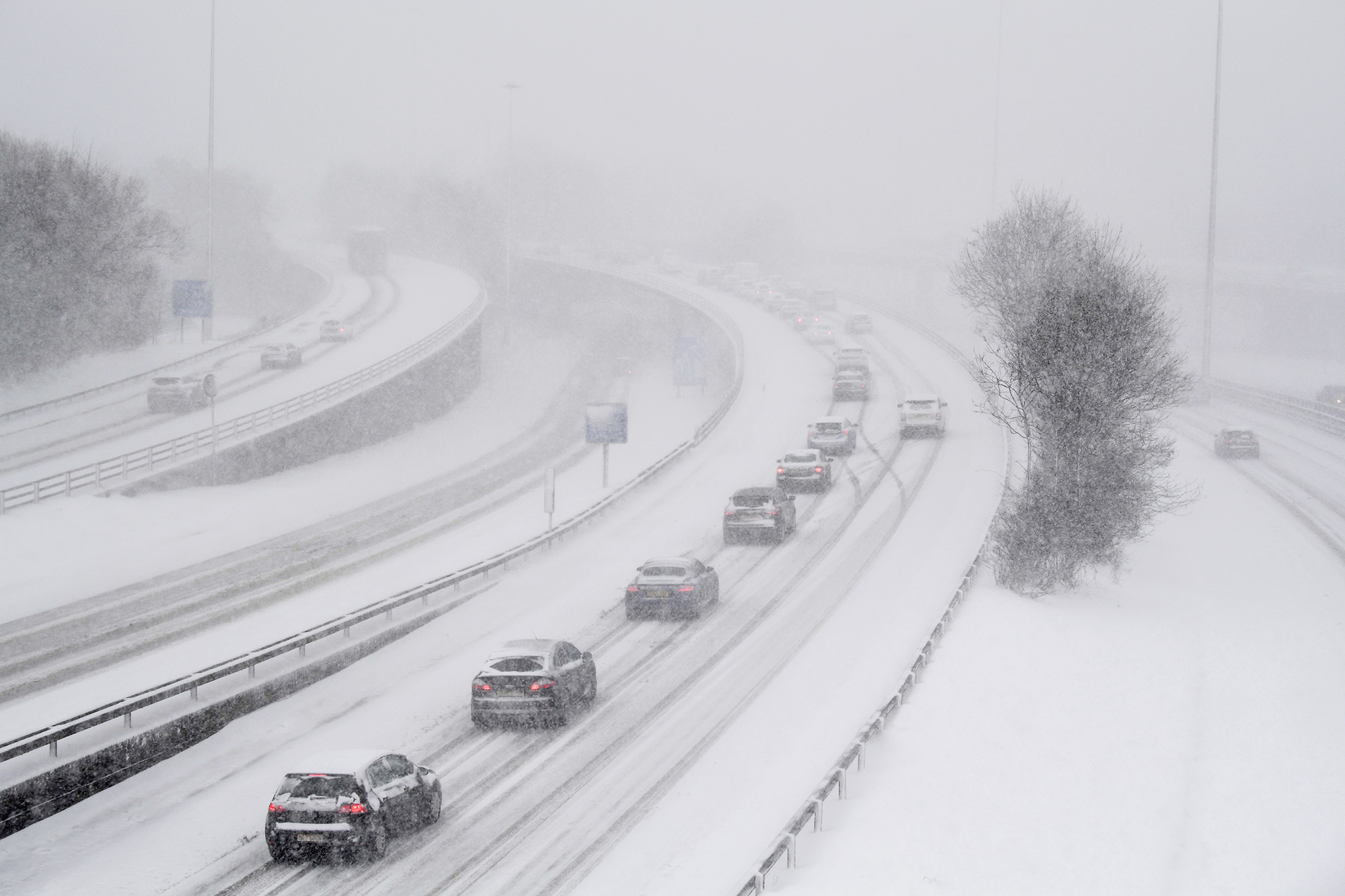 Vehicles drive through snow on the M8 in Glasgow, Scotland, yesterday. Many three-lane roads were reduced to two lanes in the conditions. 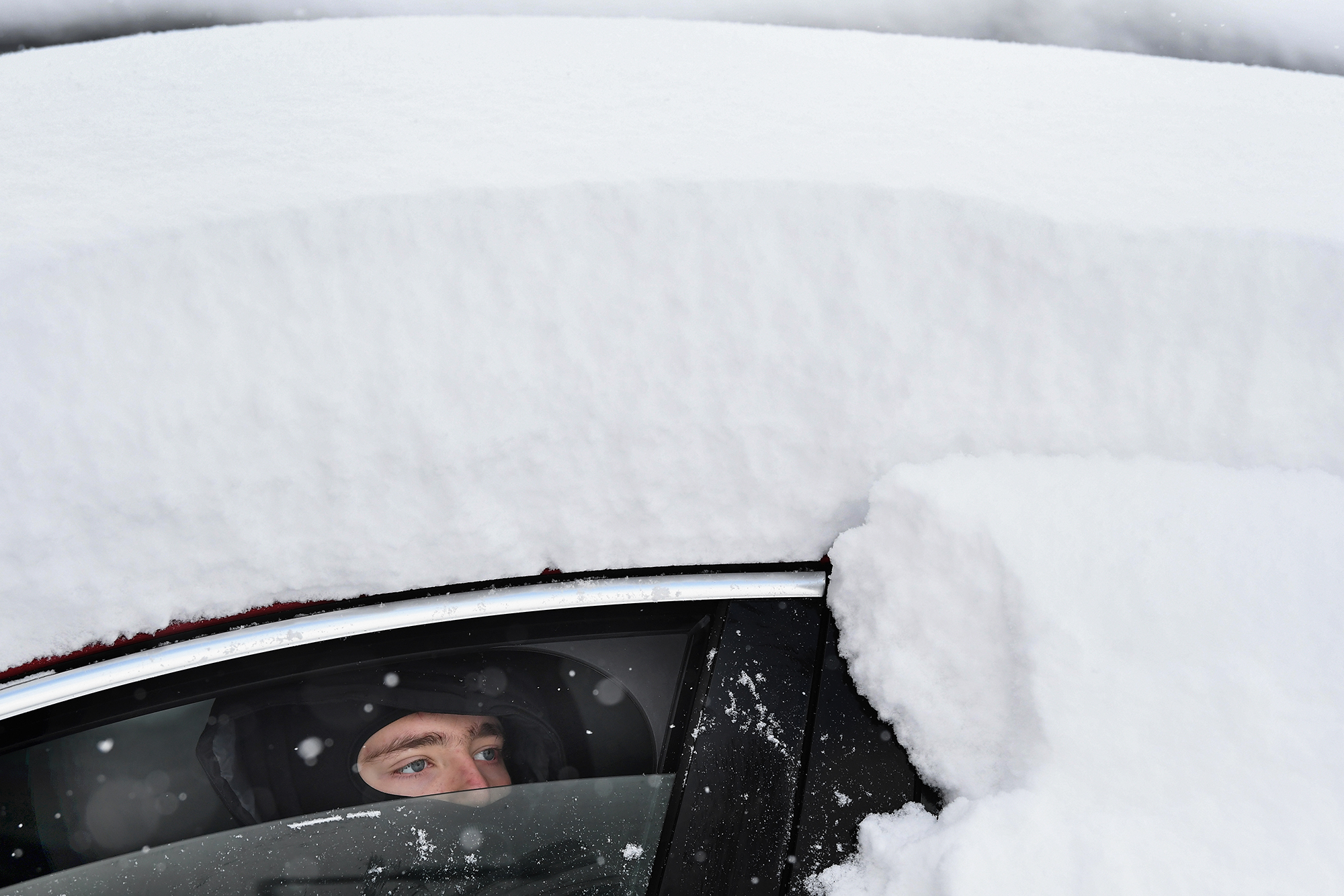 A boy looks out from snow covered car in Alexandria, Scotland, this morning.

Snow joke: 10 steps to follow if your car gets stuck in snow