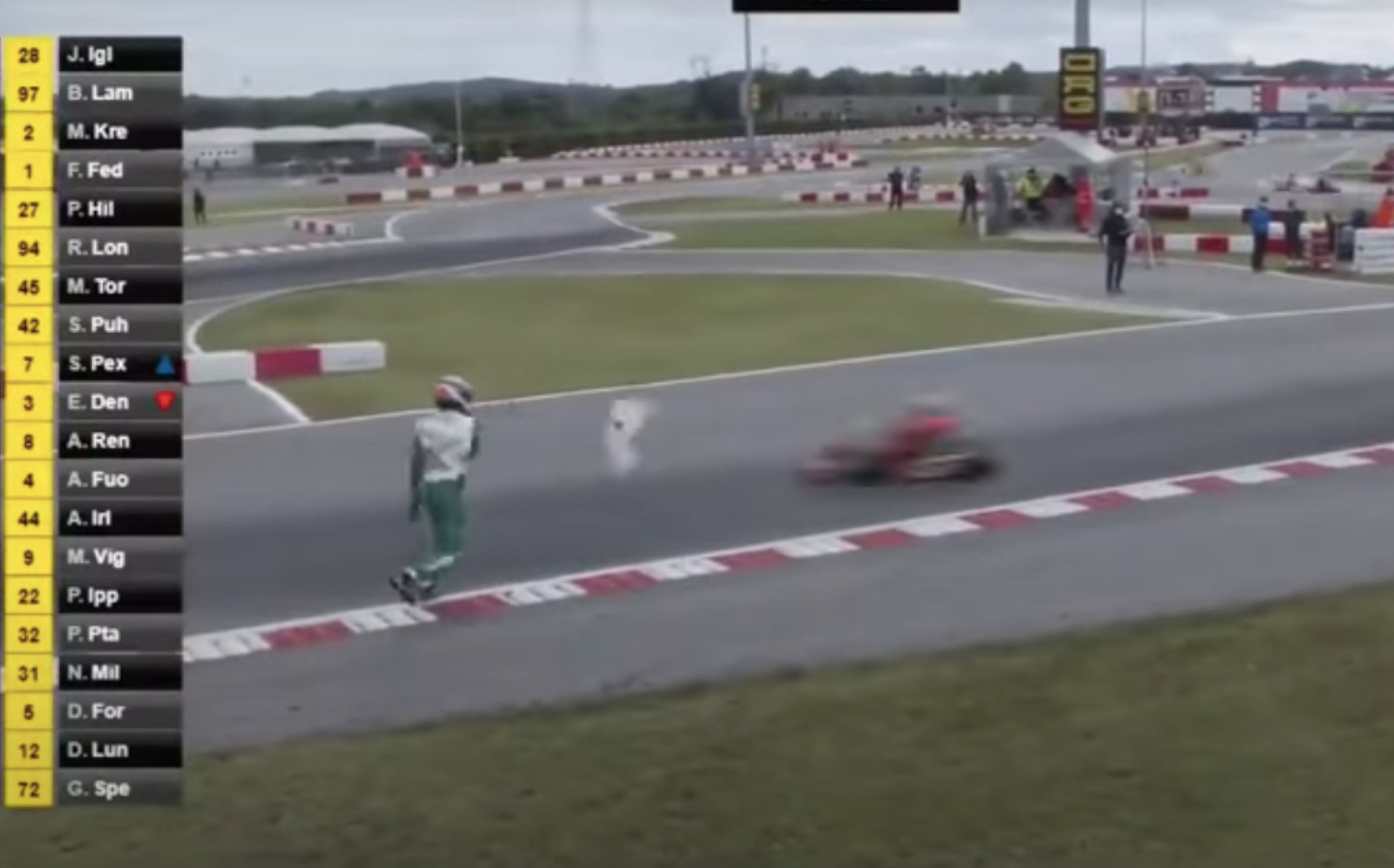 Button, who won the F1 drivers’ title with Brawn GP in 2009, said that Corberi “destroyed any chance he had at a racing career after his disgusting behaviour” on Sunday. The call, which has been echoed by other motor sport figures including McLaren Racing CEO Zak Brown, came after Corberi threw the bumper of his smashed kart at rival Paolo Ippolito. The two drivers had collided minutes earlier, forcing Corberi to retire from the race.

Luca Corberi has just destroyed any chance he had at a racing career after his disgusting behaviour today at the FIA Karting World champs. His father owns the circuit and is seen power driving the guy into a wall, Life ban for both of these idiots please https://t.co/uzWD1cDJ9w

Commentators were heard repeatedly saying, “What is he doing?” as Corberi stood by the track holding the bumper, before denouncing the karter’s actions as “absolutely unacceptable” when he threw the fragment of his kart at an oncoming racer. “Luca Corberi makes himself public enemy number one,” the commentator said, as the Italian strutted across the track, ignoring the protests of race stewards.

Video has also emerged of Corberi charging into the pit lane after the race to violently tackle Ippolito. It is also believed that Corberi’s father, who owns the Lonato Circuit at which the race took place, aggressively confronted Ippolito, as well as Ippolito’s father. Shouts of “Basta!” (“Enough!”) are heard from onlookers and people attempting to separate the racers throughout.

Button called for a life ban not only for Luca Corberi, but also his father. “[Luca Corberi’s] Father owns the circuit and is seen power driving [Ippolito] into a wall, life bans for both of these idiots please,” he said.

Karter Luca Corberi continues to vent his anger after the kart race. Somebody arrest this guy. (via @EstagiariodaF1) pic.twitter.com/R9Kuk2VI4G

Another F1 race winner, Felipe Massa, whose current occupation is that of FIA karting president, will now lead “serious action” following the incident. In a statement, he said: “This behaviour is unacceptable in our sport, those individuals will face the consequences of their actions.” Immediate action taken saw Corberi disqualified from the race. Ippolito was also disqualified for the incident that led to Corberi’s retirement.

At the time of the race, Corberi was no longer a full-time racer, and only entered the championship race at the weekend for fun. However, reports say that he has now permanently retired from all motor sport. In a social media post that he later deleted, he said: “I’d like to apologise to the motorsport community for what I’ve done. There are no excuses to explain why I’ve done such a disgraceful act.”

Acknowledging that “this episode will be remembered as one of the worst in our sport,” he claimed that he had asked the sporting judges to take away his licence but that they didn’t have the power to do it. “For this reason,” he continued, “I’ve decided I won’t take part in any other motorsport competition for the rest of my life.

“That’s not a self-justice, it’s simply the right thing to do.”

The incident comes as a disappointing and shameful end to what was once a promising career, with Corberi having beaten F1 drivers George Russell and Lance Stroll in karts in the past.