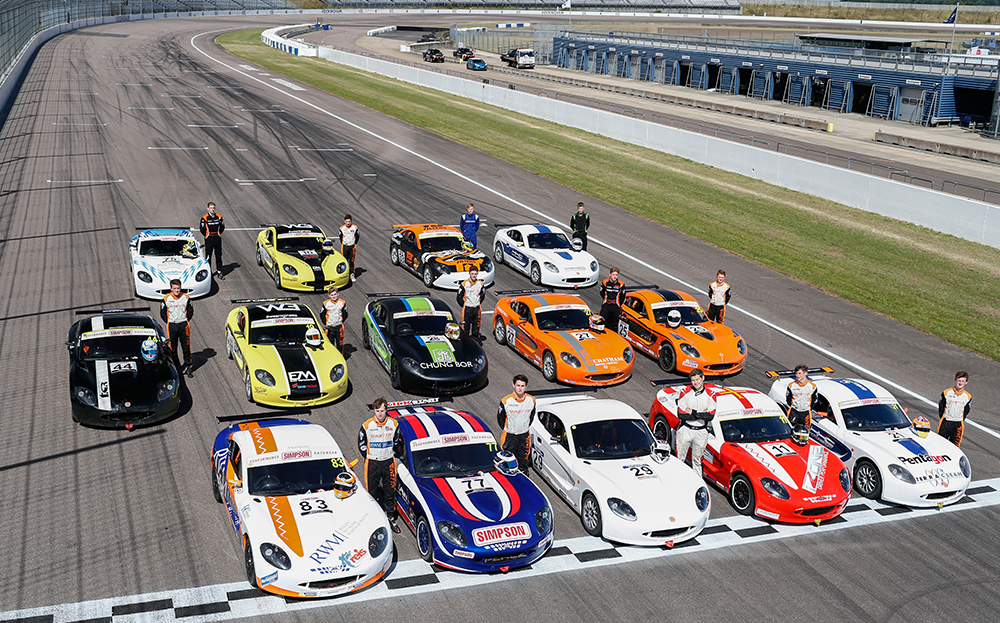 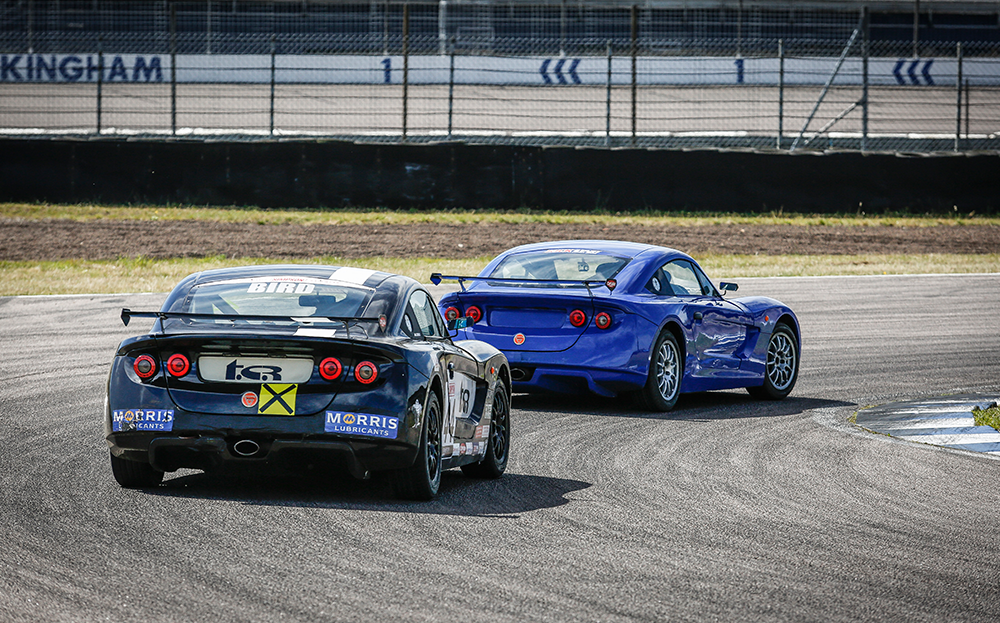 Ginetta Junior drivers are fearless and know only one speed: flat out. 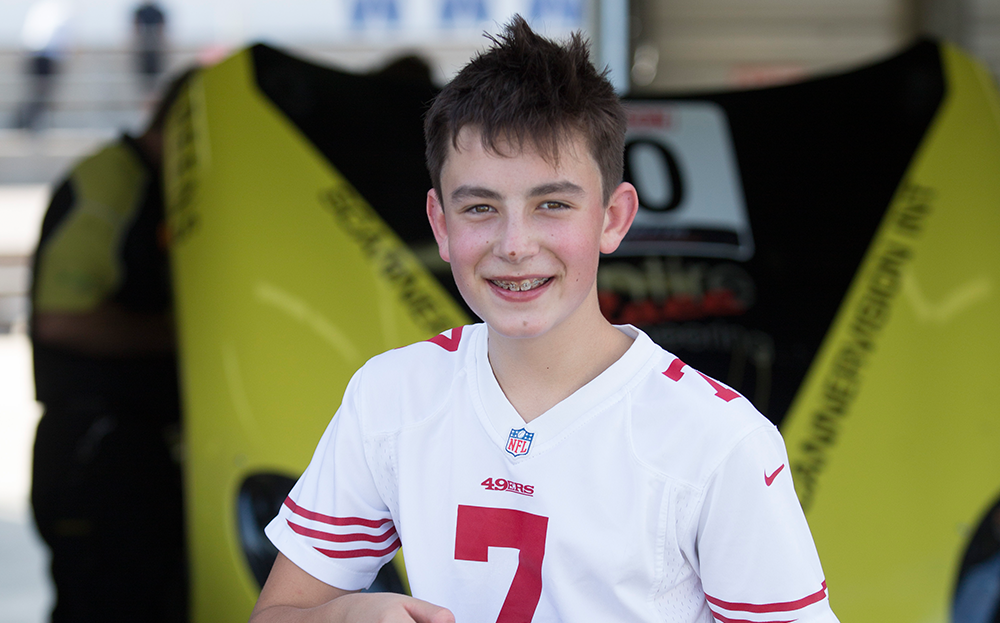 Tom Wood, 14, is in his rookie year of Ginetta Juniors but has been racing in karts since he was six. 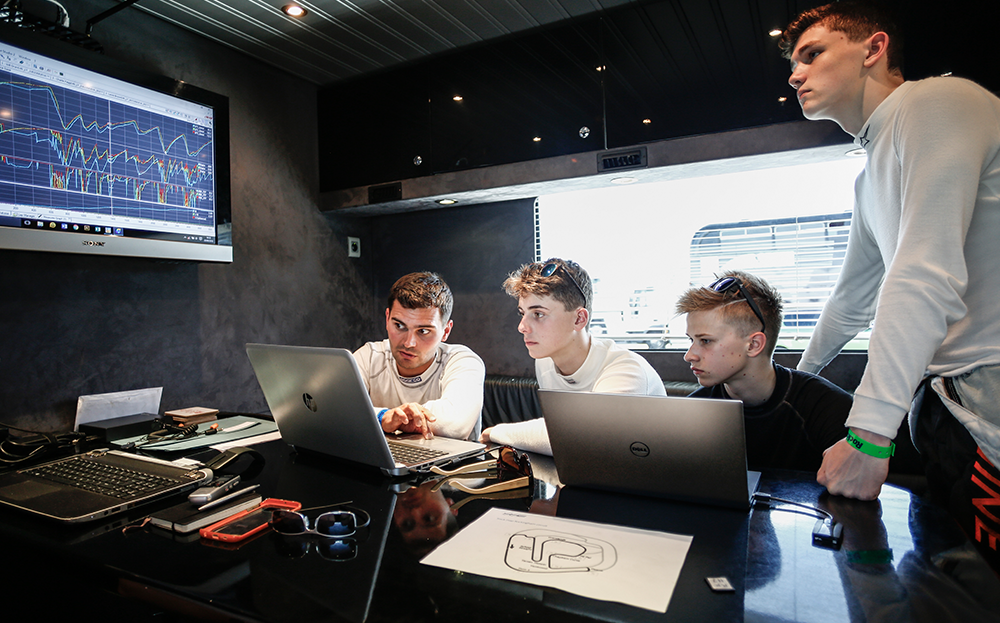 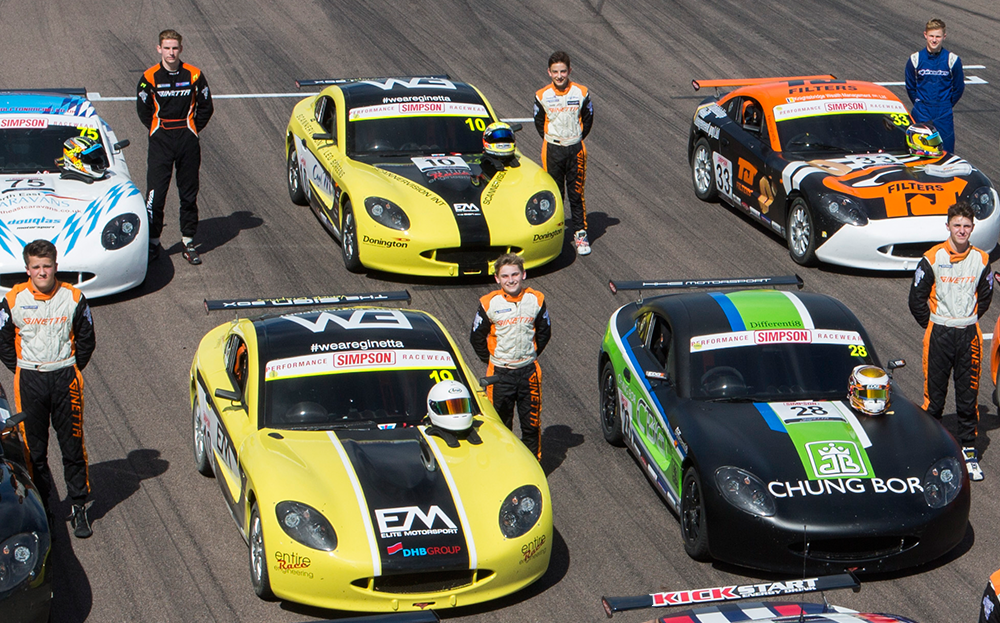 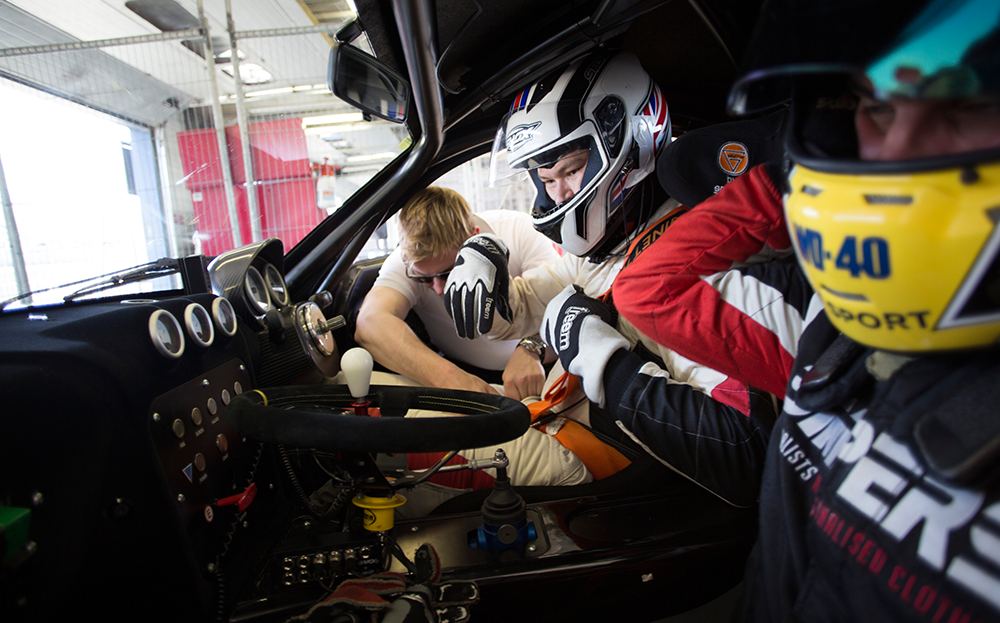 A glance at the controls of a G40 Junior is sobering. Serious stuff. 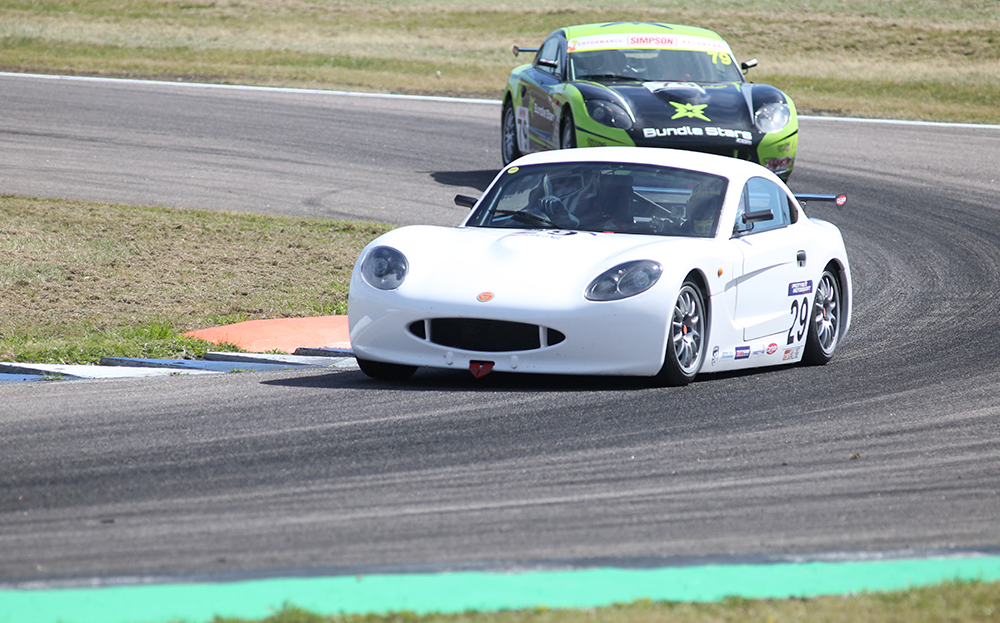 Dron is chased down by 15-year-old rookie Greg Johnson. The Ginetta G40 Junior is a serious sports car capable of 120mph. 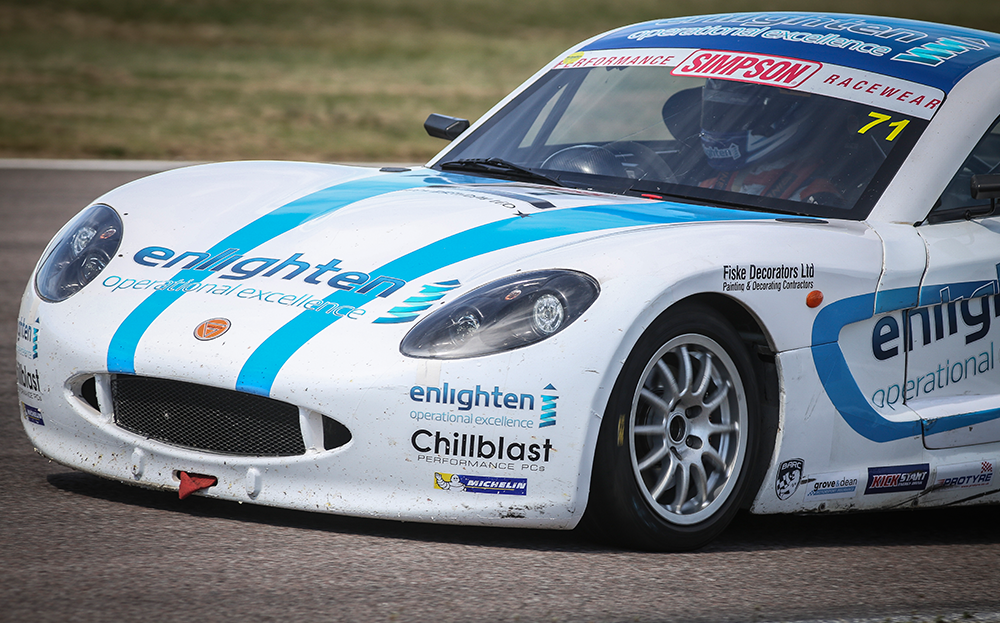 Championship leader Will Tregurtha set the pace at Rockingham. Insiders claim the best Ginetta Junior drivers are as quick as any pro pilots.

AT AN age when many teenagers spend their weekends sleeping in or hanging out on Snapchat, Tom Wood is devoting his to early starts, hard graft and trying to please demanding driving instructors.

It’s a daunting first step on the journey to become a professional racing driver, tearing around the nation’s most famous racetracks and fighting for position, nose to tail, door mirror against door mirror.

Though many are years away from being old enough for a provisional driving licence, the teenagers are all competent behind the wheel, some exceptionally so. The Ginetta Junior championship has been tailored to give them a taste of the professional highs and lows of successful racers such as Lewis Hamilton and Jenson Button. They even sound like seasoned racing drivers: “I’ve always been competitive and I’ve always wanted to win,” Wood says.

Their cars aren’t sensible little 1-litre Ford Fiestas. They drive a Ginetta G40, a British-made sports car with a 1.8-litre 100bhp Ford Zetec engine that will power the pack of Hamilton hopefuls to 120mph.

“The kids at the front are as fast as the fastest touring car driver; as a professional racer I can say that even we struggle to beat them” – Phil Glew, HHC Motorsport driver-coach

There are full roll cages to clamber through; racing seats and harnesses to snap tight; a six-speed sequential gearbox to get to grips with. And, as if that weren’t overwhelming enough, they’re fitted with tyres that were designed for the road (for reasons of cost-saving) rather than grippier racing rubber.

The Ginetta Junior series started low profile, but it’s now firmly established with a growing following. It has been helping young drivers cut their teeth since 2003, and is a support series for the British touring car championship, the UK’s best-known racing series. So the young drivers don’t just have to learn tracks and perfect their racecraft, but also deal with live TV interviews on ITV4.

The junior racing drivers are fast and fearless. They routinely nudge one another in the battle to overtake on track. Cars are damaged. Egos take a hammering. Bills for repairing battered cars are handed to parents. 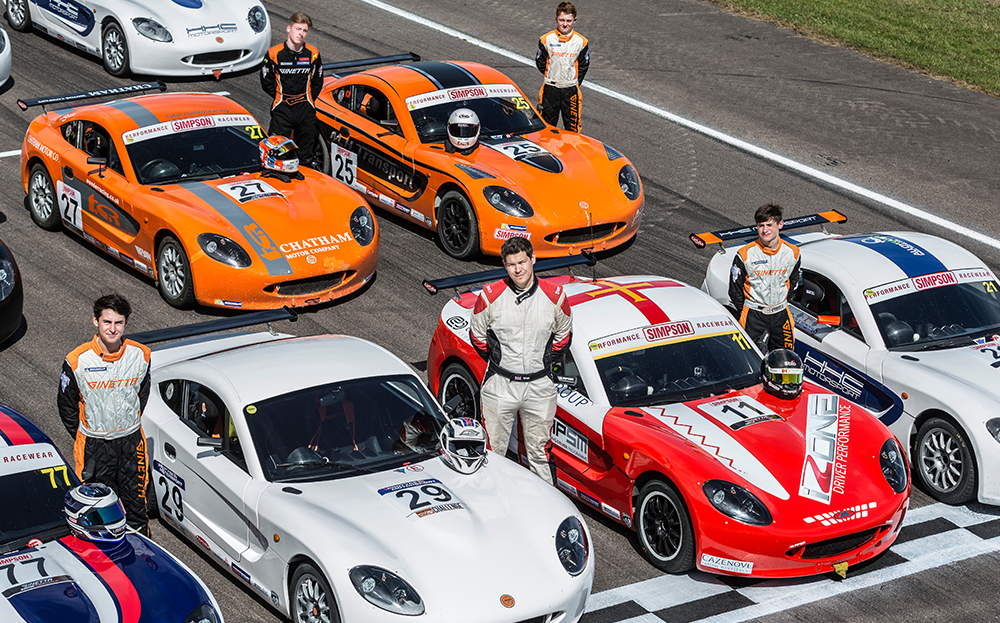 Dron (front row, centre), attempts to look as professional as the teenage Ginetta Junior contenders around him. On his right and left respectively: Seb Perez and Seb Priaulx. Behind: Dave Wooder (left of frame) and Connor Grady

The minimum cost of competing seriously in the Ginetta Junior is £60,000. But parents warn that if luck isn’t on a driver’s side, the bank of Mum and Dad could rack up costs of £100,000 in a year.

Charlie Kemp, commercial director and chief driver-coach of HHC, assures me I’ll be in safe hands with him and his team. “Quite often you’ve got this idea that Lewis Hamilton stepped out of a go-kart and climbed straight into a Formula One car, but there’s obviously a huge amount of learning that needs to go on [in between],” he says.

“Progressing from karts straight to single-seaters is possible, but what Ginetta Junior gives you is a far better understanding of the fundamentals of driving a car, particularly weight transfer [how accelerating, braking and cornering affect grip and stability].”

The skill of the drivers stems from the dedication of the teams. Lap times are analysed in extraordinary detail though data charts and in-car video footage, showing speed through corners, revs used and split-second accelerator and brake inputs. Every tiny mistake is exposed and corrected with the help of Kemp and Phil Glew, a professional racing driver employed by HHC.

“We teach them everything from how to pull away using the clutch to how to slide the car around corners,” says Glew. “At 14 they’re like sponges and they’re learning the right way to go about racing from a very early age. It makes them much, much better drivers when they go on to a senior class. The kids at the front are as fast as the fastest touring car driver — as a professional racer I can say that even we struggle to beat them.”

Kemp believes one of his graduates – Lando Norris, who won the 2014 Ginetta Junior Rookie Cup – will soon be a star of Formula One.

Surely these teens can’t be that good. I climb into a car to set a lap time myself. With 18 years’ road experience under my belt, it should be possible to show these young upstarts a thing or two about taking a bend at speed. Right?

The controls include a detachable steering wheel with digital information readout, a racing dashboard with separate buttons for power, ignition and engine start, a gearlever for the sequential transmission with prominent digital gear display and, indicating that this is most definitely not a toy, a fire extinguisher.

Driving is complicated by the gearbox. You use the clutch to pull away, and to change down a gear. But if you’re shifting up, all you need do is ease off the throttle and yank the gearlever.

Hanging on to the car is harder still. As Kemp pointed out, the G40s are designed to teach their pilots about how a car rolls through turns and dips its nose under hard braking, and how traction changes accordingly. And even with only 100bhp, oversteer – when the tail slides wide – is all too easy.

I spin the car. Twice. But happily it’s in the slight turns, well away from the fast corners and their concrete retaining walls.

This isn’t lightning quick driving but it’s devilishly tricky to master. My lap times are some nine seconds off those of the 2016 championship leader and HHC driver Will Tregurtha. 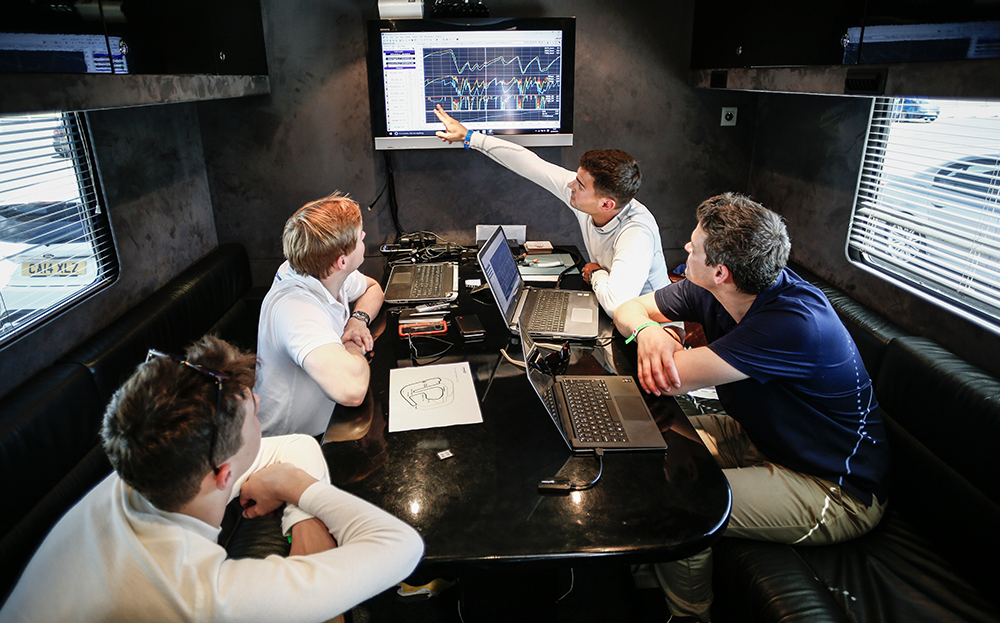 The team gives me encouragement, however. They lay out confusing-looking data charts, and use them to explain where I’m making mistakes. Everywhere, as it turns out. Tregurtha’s use of accelerator and brake is a series of smooth, confident peaks and troughs. Mine is all over the shop – braking too early, accelerating too late . . . Nothing that can’t be corrected, I’m told, but it proves where a normal driver’s skills end and a Ginetta Junior racer’s don’t.

Norris, Wood, Tregurtha and most of the young drivers joining Ginetta Junior have had some form of racing experience, mostly in karts, but it’s not essential, Kemp says.

“One of the things I like is if a driver comes to me and says, ‘Well, I’ve done a bit of this and that but, to be fair, really all I’ve done is drive a car flat-out around a field since I was eight.’ At that point I go, ‘Brilliant’, because they’re probably going to have a bit more understanding of how a big car moves around than someone who has only driven on European kart circuits with sticky slicks [racing tyres].”

“The main aim is to create better drivers. . . the tools that we’re giving them at this stage mean that, even at a very young age, they command respect”

Motor sport is an expensive pastime, even with sponsorship deals, so parents with at least some disposable income are essential. Ginetta quotes an entry fee of £14,995 for the Junior championship, but that just covers track fees, tickets and hospitality for the 10 race weekends and test days, plus a racing suit for the driver.

And then there are the repair costs. One 17-year-old’s father says it’s not uncommon to receive a hefty bill from the team after a race weekend. “A front-end bump can damage the bonnet; that’s £3,000. Then they’re always doing the frame underneath, and they’ve probably put a hole in the radiator at the same time. And as they do that somebody probably runs up the back of them, so that’s a rear bumper. So you get a bill for three or four grand every time that happens, and that’s happened to me at the last three rounds. There’s a quick £12,000 right there.”

Another cost to parents is time. Most competitors can’t yet drive themselves to the races and test days, so parents must act as chauffeurs.

Despite all the effort the families put in, it’s entirely possible these teenagers won’t realise their dreams of becoming professional racing driver. But Kemp believes his training will prepare his drivers for more than just a role behind the wheel.

“The main aim for me, and what we only ever promise a mother or a father, is that we’ll give them a better driver at the end of it. A better driver isn’t necessarily faster; we want them all to go to F1 – that’s the pinnacle – but the tools that we’re giving them at this stage mean that, even at a very young age, they command respect. We’re making them not just a racing driver but a professional.”

At 14, though, does Tom Wood think he’s mature and skilled enough to drive on the road? “I don’t know. I might be a bit fast for the roads,” he says. “But I’d be safe with it, as I’m used to driving fast.”

Will Dron’s racing suit was supplied by FreeM Racewear