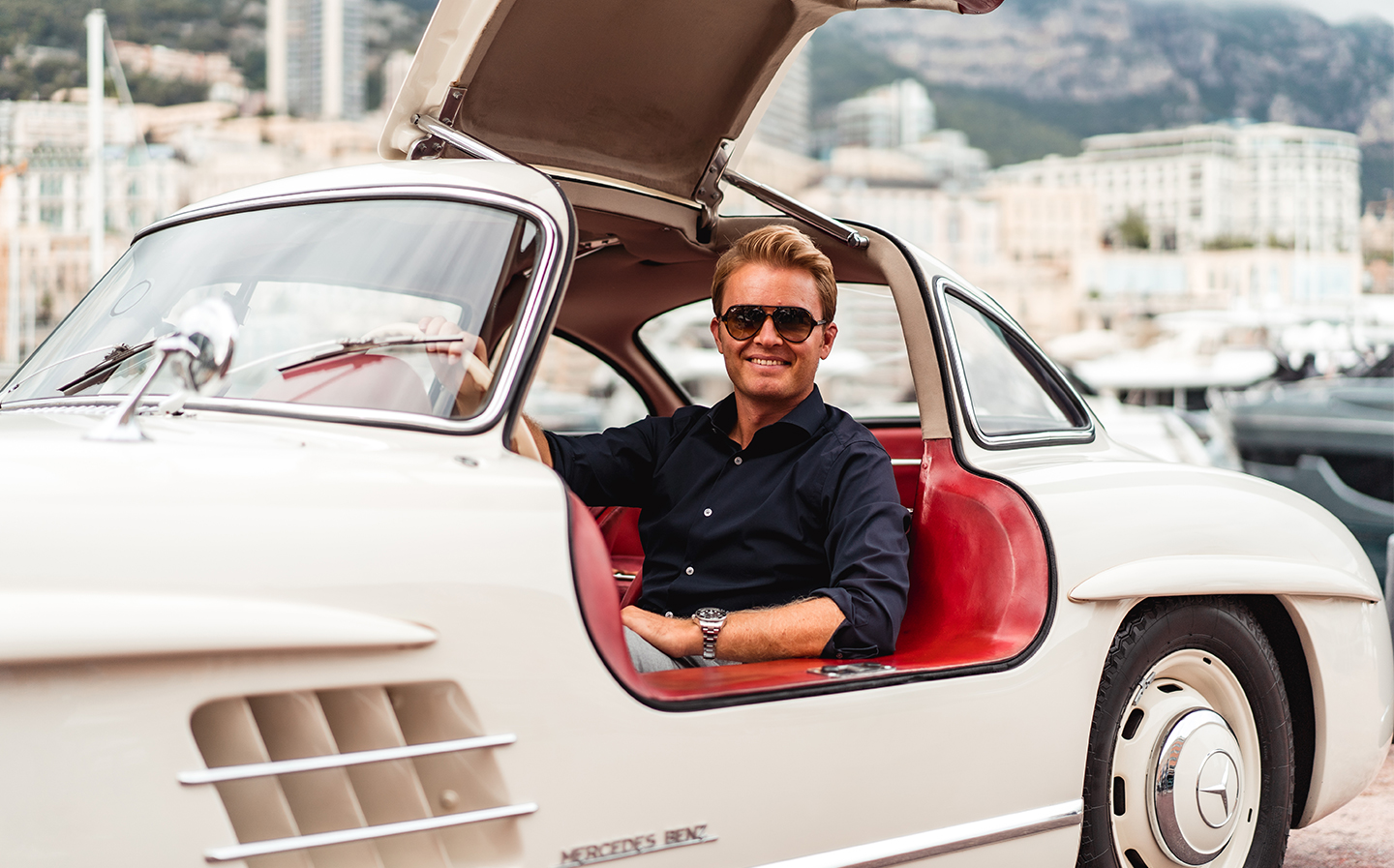 WHEN NICO Rosberg crossed the line at the 2016 Abu Dhabi Grand Prix and secured his maiden Formula One Drivers’ Championship at the expense of his highly rated, highly skilled teammate Lewis Hamilton, the success split opinion and predictions of the watching fans around the World.

Some felt this was the long-awaited and richly deserved, first of many, World Titles for one of the most well-regarded drivers in the paddock. Others felt Rosberg had scrapped out an unlikely victory against one of the greatest of all F1 stars and would be put back in his box the following season.

What nobody expected was what happened next. As calmly as he piloted his Formula One car to success, he announced he would be leaving the sport and retiring with immediate effect. In one of the most remarkable and dignified sporting exits, Rosberg had walked away from a rumoured £18m a year Mercedes contract and the chance of future glory.

This was a rare occasion when a sportsman departs at the very top of the tree and despite the global press the retirement attracted, you might have expected it to be the final footnote to his career and, as he retreated from the spotlight, perhaps the last many of us would hear from him, save for an honorary spot on the after-dinner speaking circuit.

That would be to underestimate Rosberg the sportsman and certainly Rosberg the individual. The son of another F1 world champion, he has undoubtedly had a gilded life but has certainly not sat back in his cage. His Instagram profile simply states ‘F1 World Champion’ but he could also add ‘Multilinguist, Entrepreneur, Father, Eco-Warrior, #highachiever’ to the list.

Instead of relaxing into a life of family, fishing and the occasional round of golf, Rosberg threw himself into business and investment and the exploitation of his skill on four wheels. As well as retaining ambassador roles for both Rolex and Hugo Boss, he pops up on television as an F1 pundit and imparts his expertise in a refreshingly unfiltered way, now unencumbered by the shackles of corporate diktat.

But his real passion is the pursuit of ethical and sustainable start-ups and investments, or as he puts it: “I want to have a positive impact for many, many people out there and for our planet.” 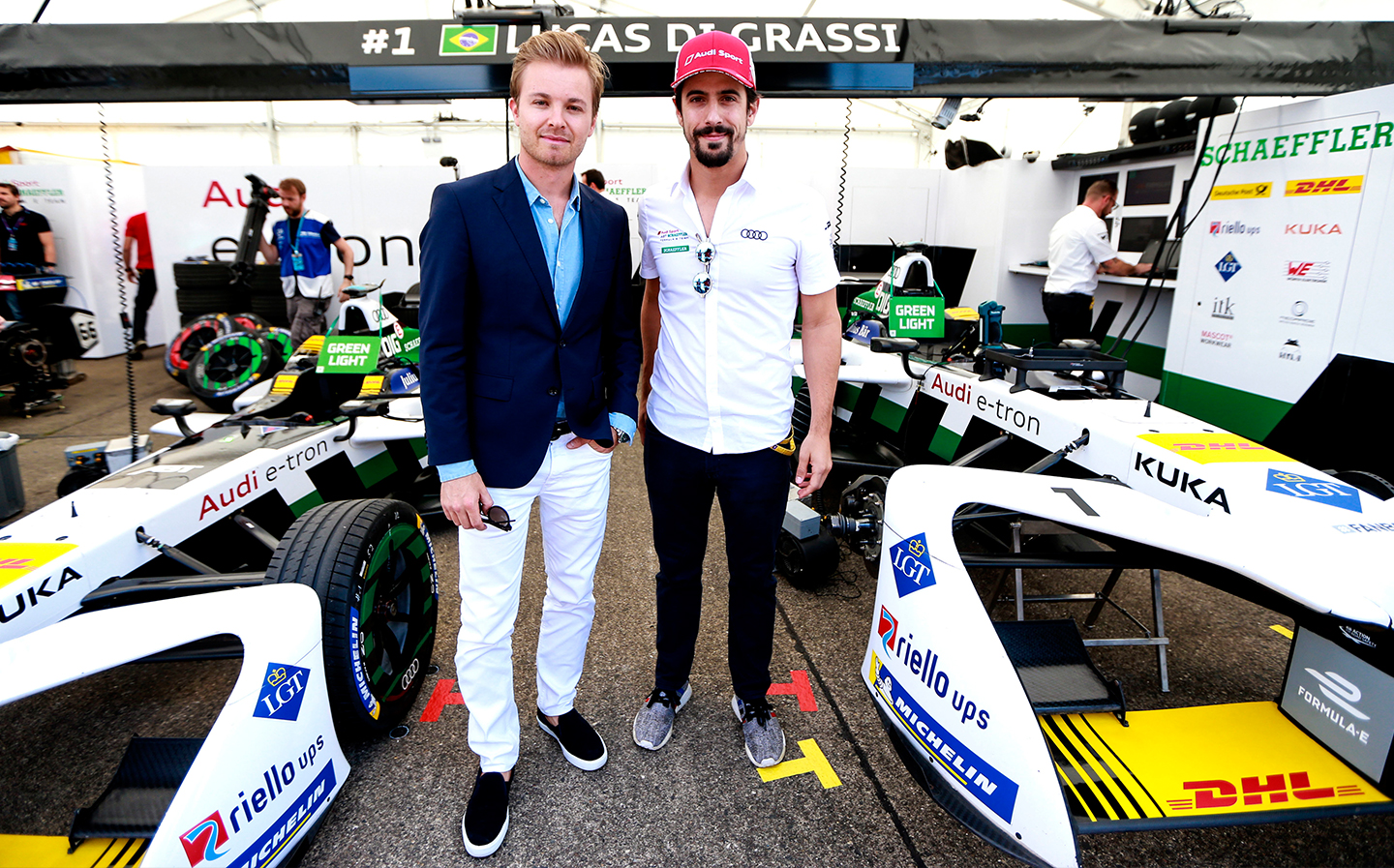 This has involved shares in Formula E, the pure-electric single-seater racing series, his engineering company, TRE, and his GreenTech event, which he describes as a “festival for preserving the planet”.

The most hedonistic of his new ventures is Drivin’ with Nico, which, despite sounding like a Chris Rea song is a three-day motoring event that defies the usual pigeon hole classification.

Yes, it’s a road rally and a way to sample various cars, but unlike most rallies that specify and work in a narrow window of specification, such as pre-war, Drivin’ is a broad church that not only allows the celebration of some of the all-time classics, but also a chance to sample some new motoring technology at a Formula One circuit … and in the company of an F1 world champion.

With this event, Rosberg is hoping to muscle his way into the motoring social calendar with an event that is both a motoring enthusiast’s bacchanal and a showcase for all things in which he is interested, invariably with an environmental slant. 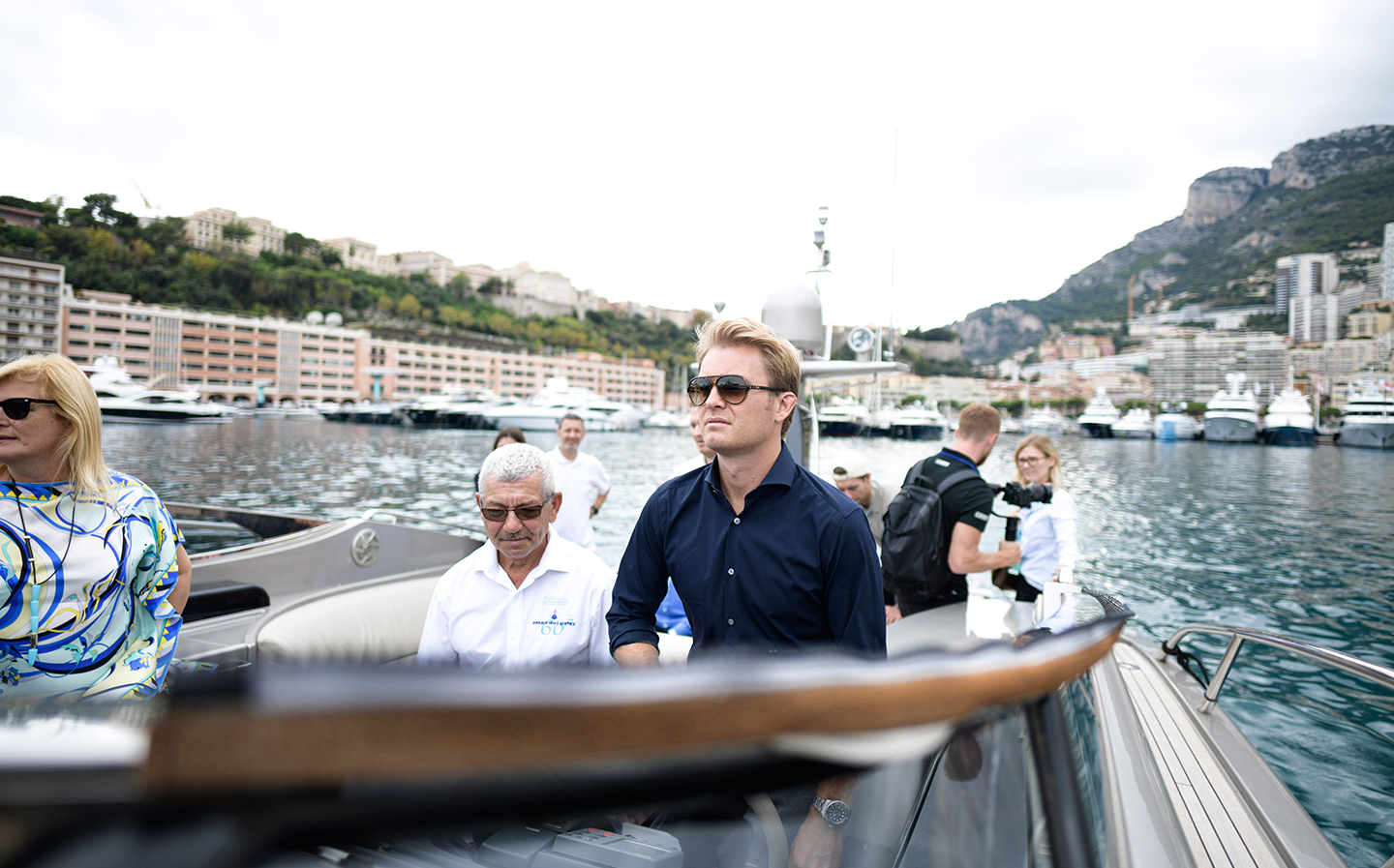 At the inaugural gathering in the south of France, this heady cocktail of motoring decadence attracted an eccentric mix of participants in a jaw-dropping line-up of cars. A games tech entrepreneur in a Ferrari 288 GTO, a California-based British classic car broker in a throaty Shelby Cobra, and a Milanese architect owner of a divinely elegant Alfa Romeo 6C that won the Coppa d’Oro at Villa d’Este, were just part of the line-up.

The event started in the port of Monaco. Rosberg is a child of the city-state and he comes across as an ambassador for the principality with this event serving as a homage to his hometown.

“Drivin’ with Nico is one way I want to have a positive impact for many, many people out there and for our planet”

While the original Cannonball Run started in a carpark in east New York, this super-luxe version kicked off in the Monacan equivalent, The Riva Tunnel. This extraordinary landmark in Port Hercules was the perfect location to get the festivities underway. 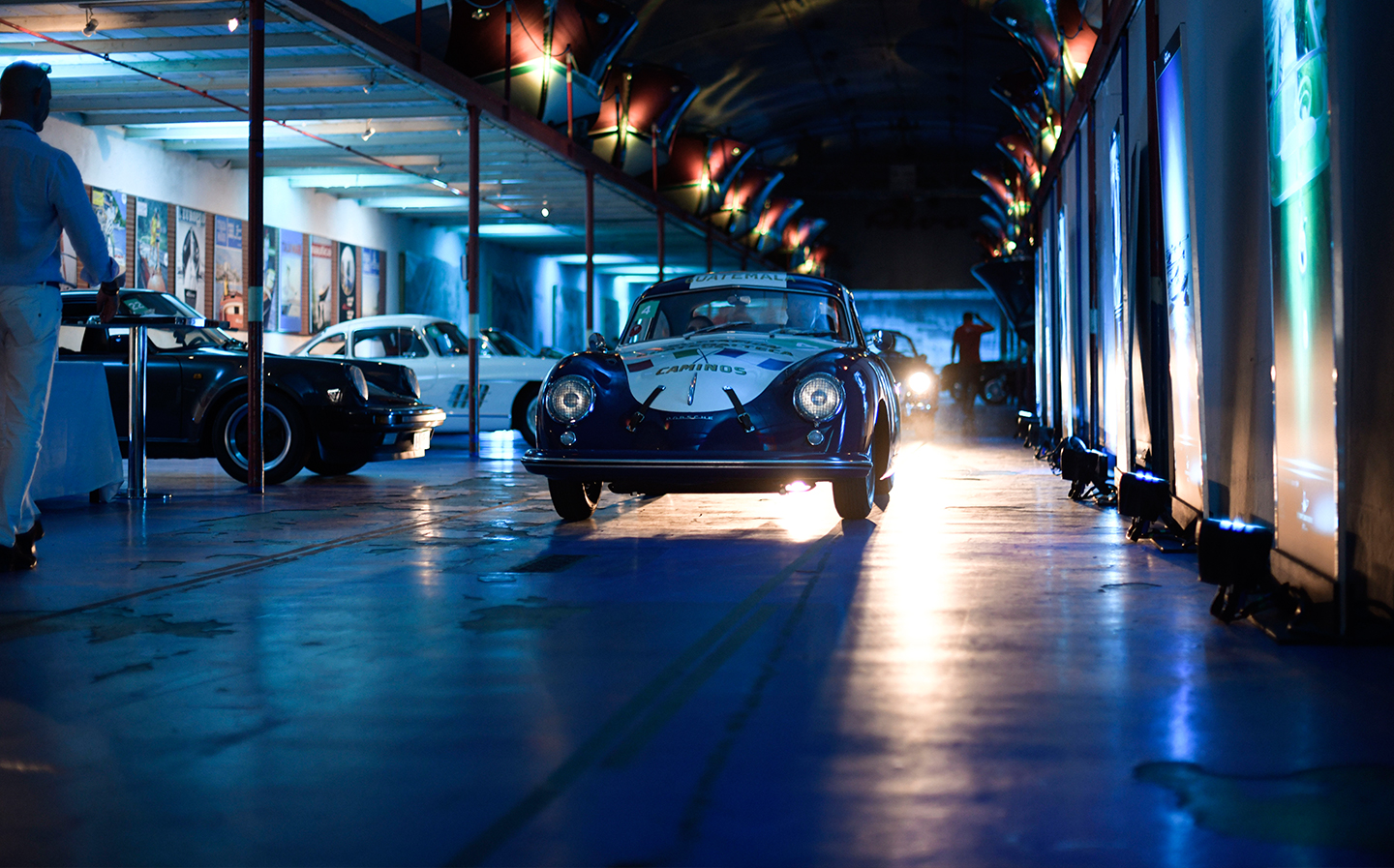 In 1959, Carlo Riva needed a storage facility for his eponymous, mahogany-hulled boats and he persuaded Prince Rainier to let him dynamite a 100-metre cavern in the rock face under the palace. Sixty years later it serves as the perfect staging post for this group of auto exotica.

The hometown boy is keen to point out the more mundane sides of what often comes across as a rich playboy’s paradise. Indeed, he was a pupil to the school above the Riva Tunnel and the drivers seem to enjoy his recollections that bring this Bond-like location back to earth.

After loading and registering the cars and a brief chance to meet their fellow drivers, the first leg was a leisurely trip to the overnight stop and base for the event, the Grand-Hotel du Cap-Ferrat. 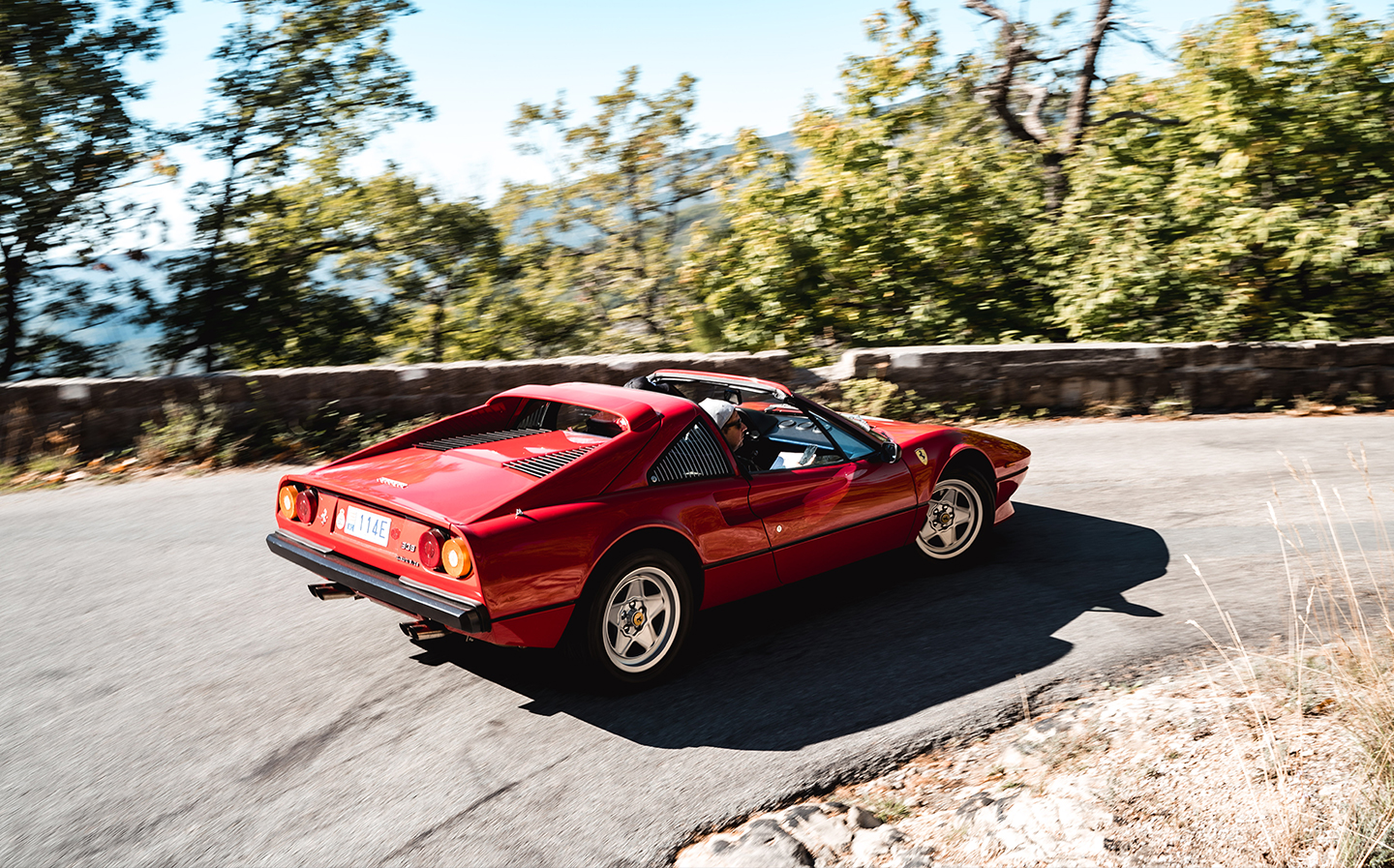 The first day of action was a track day at Circuit Paul Ricard, location for round eight of this years F1 championship. To get there, Rosberg has eight private jets on standby to make the short hop from Nice airport to the runaway adjacent to the circuit’s main straight at Le Castellet.

Of course, the line up of private jets seems diametrically opposed to Rosberg’s environmental aspirations but in keeping with the rest of the event, this is a carbon-neutral journey. The CEO of GlobeAir, Bernhard Fragner, who happens to be in the cockpit of one of the jets, explains that with the use of relatively efficient Citation Mustang planes and working with the Swiss agency, Carbon Connect, they can offset the flights’ carbon footprint.

Fragner is also the mastermind of coordinating the jets to fly in close formation to the track. It looked impressively easy, but, “Trust me, behind the scenes it required prep work and quite an effort to arrange,” he explains, and is clearly happy to get everyone there safely and on time. 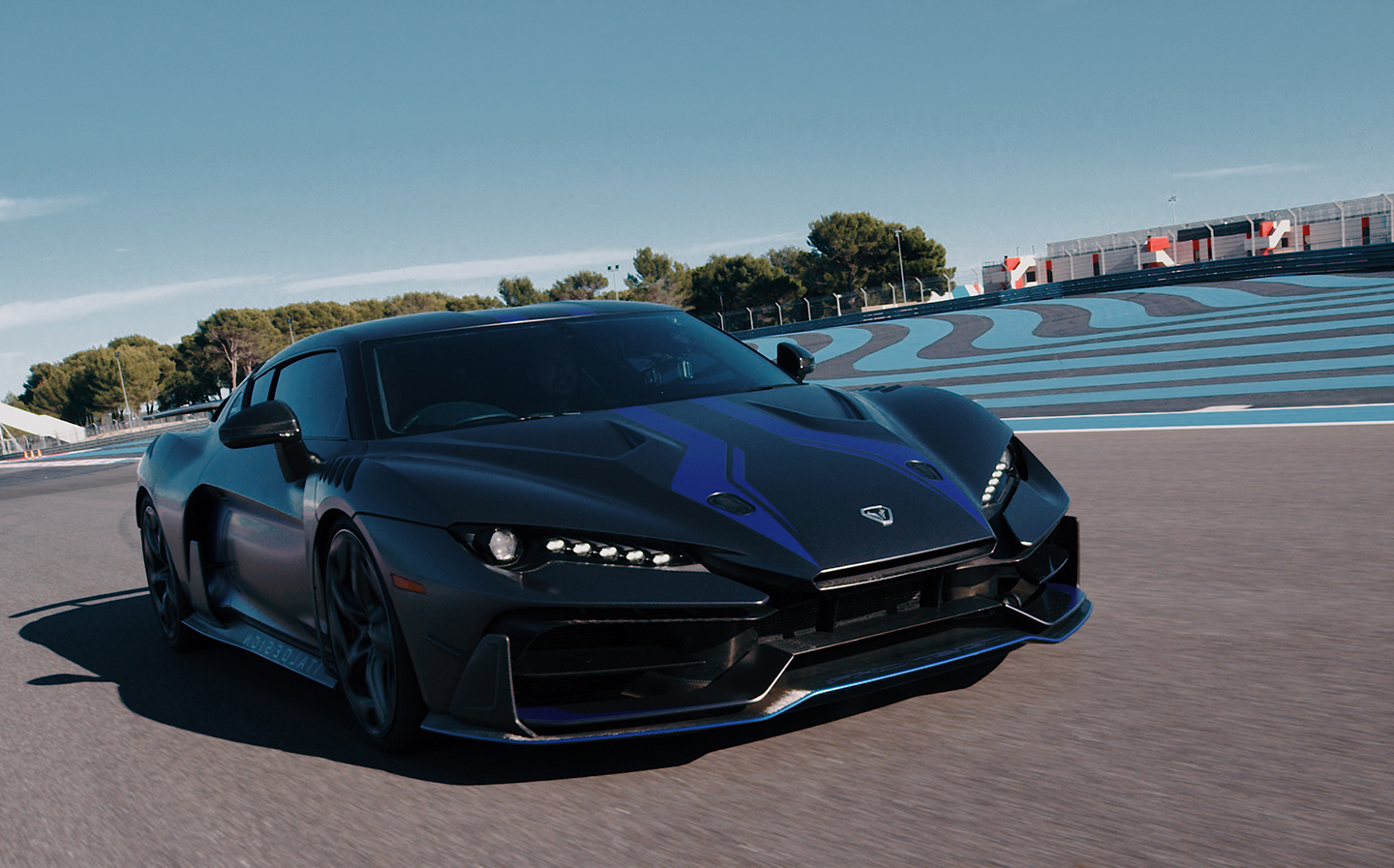 Once at the circuit, a host of toys to play with were lined up in the pits. Rosberg is as much a kid in the sweet shop as the rest of us, and the only disappointment of the participants was when one chosen vehicle was no longer available to drive, as the F1 champ had cooked the brakes in a couple of overzealous but extremely fast laps.

True to his desire to steer drivers towards newer, more sustainable tech while not ignoring the glorious past of motoring, clean, pure-electric tech marvels sat side by side with the most bellicose internal combustion beasts. 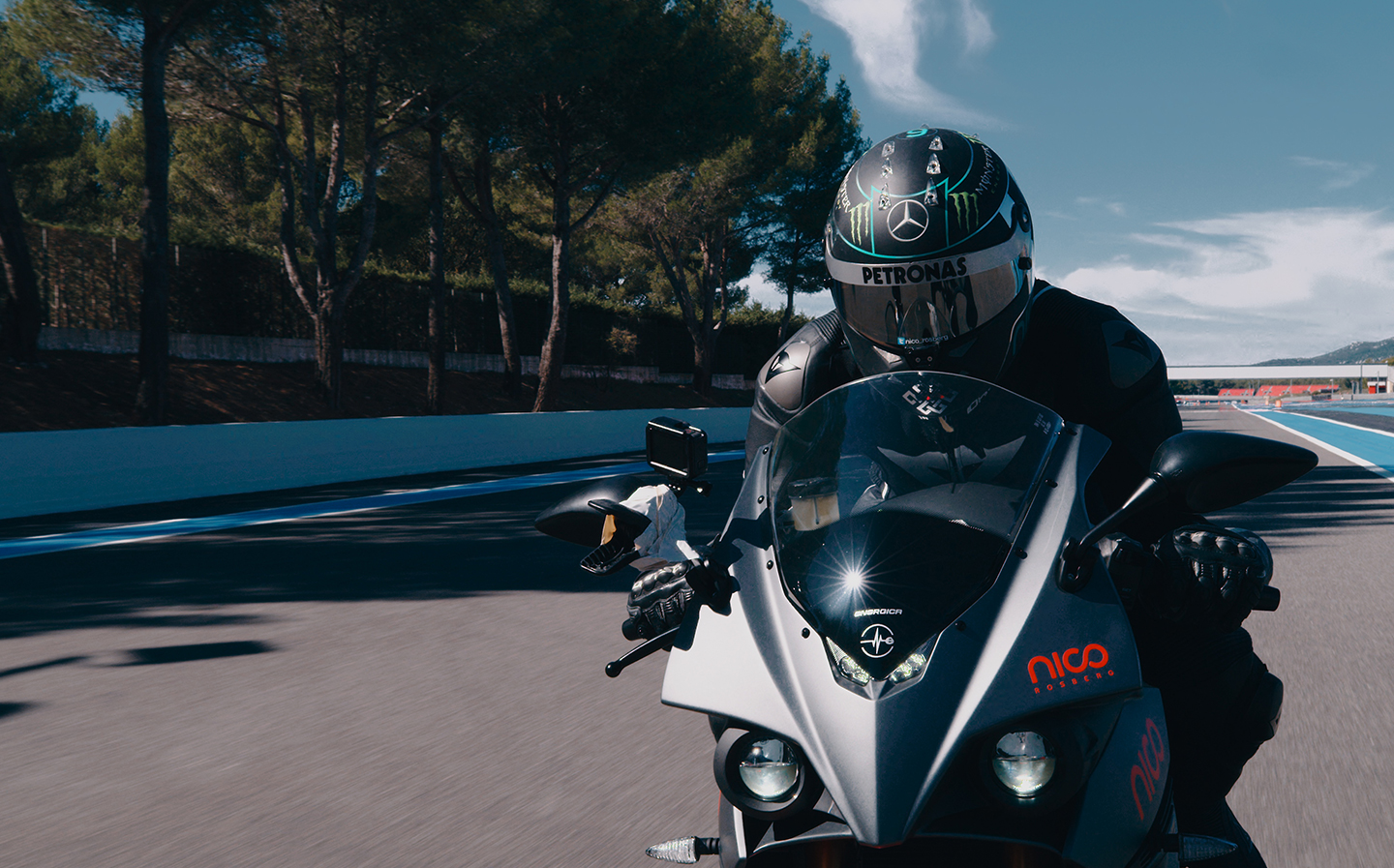 Representing the electric-powered brigade was a stealthy Rimac, a Jaguar I-Pace and even an Energica electric motorbike, as well as a host of more ‘traditional’ fire and brimstone internal combustion-engined cars such as Aston Martin Vantage and ItalDesign’s outrageous looking Zerouno.

“There’s a competitive element, but the event’s really about having a lovely time and experience these classic cars together”

If enthusiasm for the horsepower in all its various forms started to wane, another more fragrant experience was on hand. Chateau de la Colle Noire, a private home of Parfums Christian Dior, one of the event partners, opened its doors to the competitors, who could take a break from speedy pursuits to visit the chic, aromatic surroundings of the Grasse countryside.

The next day was a rally through the foothills of the Alps taking in parts of the Route Napoleon. This driving event was run on the archaic and, to some, baffling rules of regularity rallies. A mixture of navigational prowess and driving dexterity, it was old hat to many but a new experience for around half the field, including Rosberg. 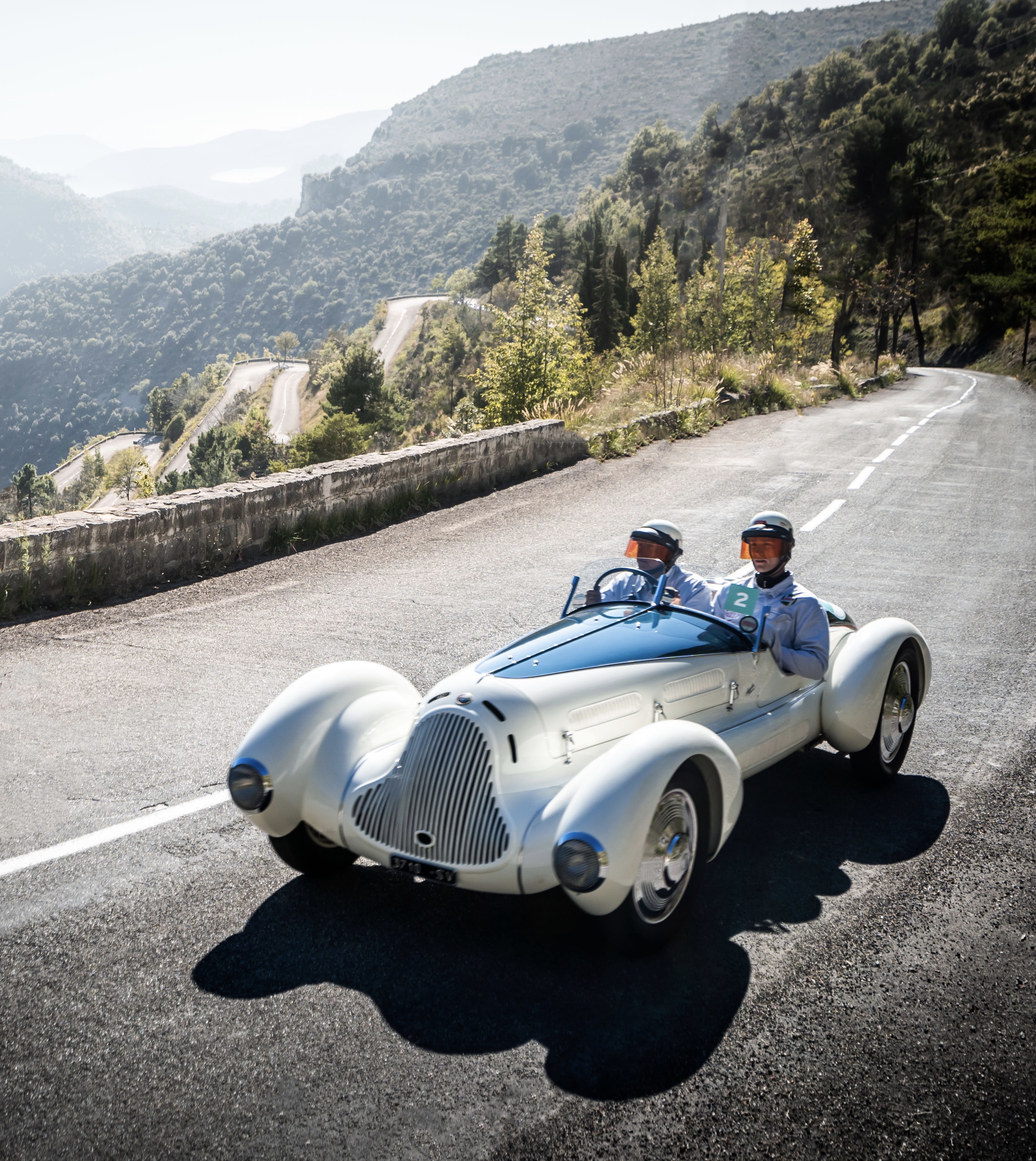 For this leg, he brought along his white Mercedes 300SL Gullwing – a car of extraordinary good looks, it is his pride and joy and surely one of the catalysts for the organising the event.

“It’s really about having a lovely time together and experiencing the emotion of these classic cars,” he offers, but I get the impression that doing well in the rally standings is of equal importance to him.

The final leg of the navigation took everyone on a lap of the Monaco F1 circuit, albeit during rush hour and back to the Cap-Ferrat to see who has won and could own the all-important bragging rights. The award ceremony took place by one of the most celebrated hotel pools in the world, the Club Dauphine at the Cap-Ferrat. 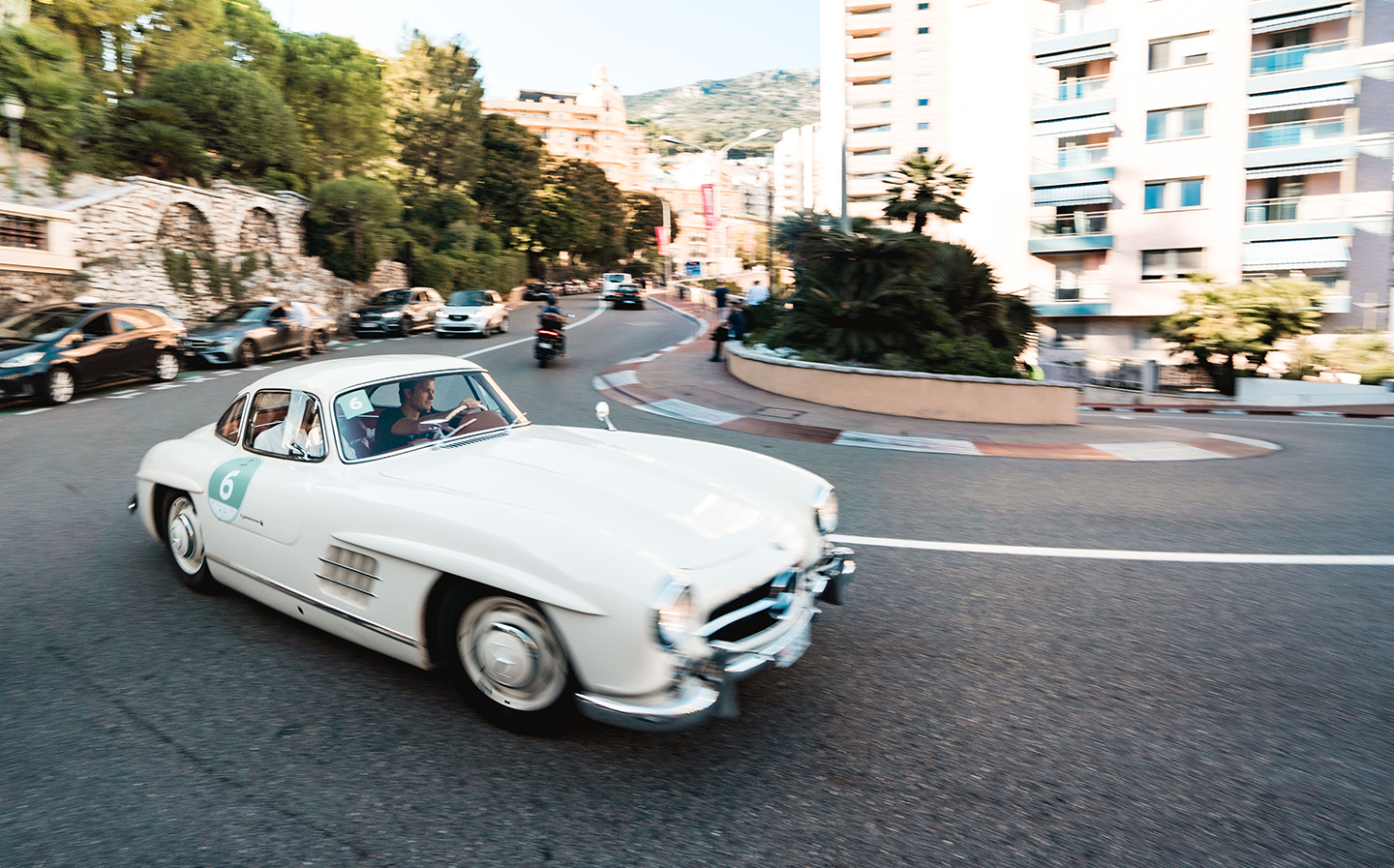 Making it on to the podium, Rosberg proudly claimed his second-place prize, able to forget for a moment that he is the organiser of the event. After graciously accepting the runners-up position — quite an achievement in his first regularity rally — his steely determination then crept out: “I’ll win next year,” he declared.

When I ask what he misses about professional competition he fires back: “Winning.” An honest, quick, subconscious reply and then with more thought: “Winning and celebrating with friends.”

Maybe creating his own rally is a way for him to keep the competitive embers burning? I guess you can’t keep a world champion down, and there’s still more in the tank … or should that be lithium battery?

Me and My Motor: Nico Rosberg, Formula One champion