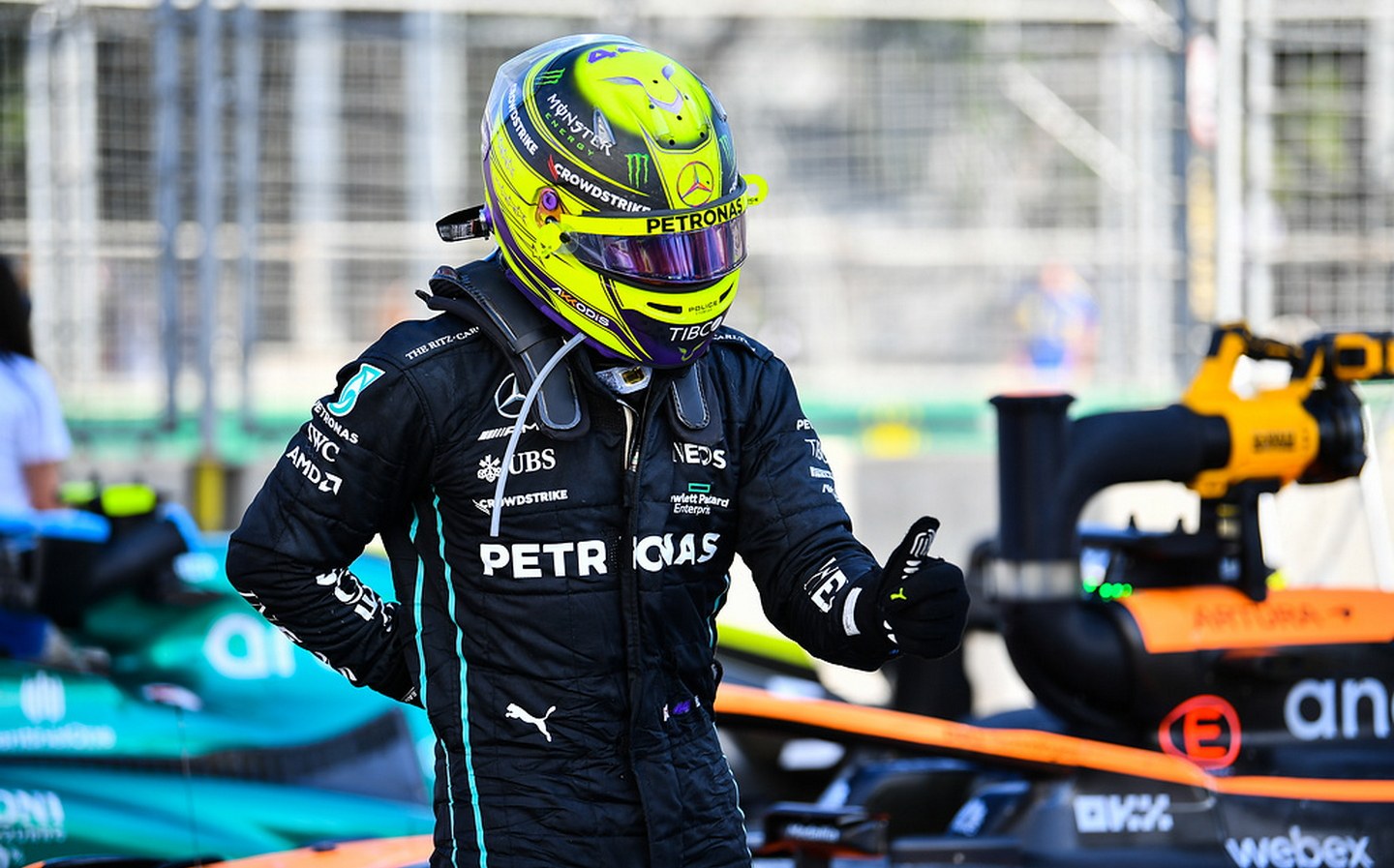 Lewis Hamilton has said he won’t miss this weekend’s Canadian Grand Prix in Montreal despite excruciating back pain caused by his bouncing Mercedes during the Azerbaijan GP left him “praying” for the race to end.

The seven-time world champion struggled to get out of the car following the race in Baku yesteray and was seen clutching his lower back as he made his way back to the team garage. Although Hamilton finished fourth behind his teammate George Russell, he later said there were times during the race where he didn’t know if he would be able to finish at all.

“There were a lot of moments when I didn’t know whether I was going to make it and if I was going to be able to keep the car on track,” Hamilton said. “That was the most painful and toughest race I have experienced.”

“I was just holding and biting down on my teeth due to the pain. The adrenaline helped, but I cannot express the pain that you experience, particularly on the straight. I was just praying for it to end.

“The thing was bouncing so much there were so many times I was nearly going into the wall. That was a concern safety-wise. I don’t think I’ve ever really had to think about that too much as a racing driver.”

The bouncing to which Hamilton refers is known as “porpoising” (due to its resemblance to the way a porpoise moves through the water) and is a product of this year’s rule changes in F1 that sees greater use made of aerodynamic ground effect resulting in a lower ride height for the cars.

The undersides of the cars suck the cars to the ground, and the higher the speed the greater the downforce generated. However, because the underside of the cars run so close to the track on long straights, they now have a greater tendency to “bottom out” on bumps, meaning that the car’s underbelly hits the ground then bounces up, momentarily losing the ground effect, before being sucked down and again hitting the deck. This can happen multiple times on long, high speed section of track.

The process sends a jolt through the entire structure and the driver experiences it dramatically, with very little in the way of padding in the seat and their backside riding just millimetres from the bottom of the chassis.

For Mercedes, the problem has been particularly acute and has been cited as the main reason for the team’s lack of pace this year in contrast to its Constructor’s Championship-winning performance in 2021. With a car bouncing down straights, its very hard to settle the cars under braking for corners, which means a lack of control.

“There is so much potential in this car, but we can’t unlock it at all until we stop this bouncing,” said Hamilton. “We have a much different looking car to everyone else and we need to look and see whether that’s right or wrong.

“All the drivers together are discussing [the porpoising]. None of us want to continue with having this bouncing for the next four years of regulations. I’m sure the teams will be working at it.”

Towards the end of the race in Baku, Mercedes team boss, Toto Wolff, apologised to Hamilton.

“Lewis we all know this is a bit of a sh**box to drive and sorry for the back. We will sort ourselves out.”

The porpoising issue was likely amplified in Baku by the fact that it is a street circuit, rather than a smooth purpose-built track, with an exceedingly long start-finish straight that sees the cars running in excess of 210mph.

In a post-race interview, Wolff also addressed the issue, hinting that Hamilton may not even be fit to drive at the Canadian Grand Prix.

“He is really bad,” said Wolff. “You can see this is not muscular anymore. It goes properly into the spine, and it can have some consequences. The solution could be to have someone on reserve, which we anyway have at every race.”

However, Hamilton — who has undergone physiotherapy, cryotherapy treatment and acupuncture to deal with the pain — said on Monday that while he was “worried” about the upcoming race in Montreal following what he described as “the toughest race” of his career, he would taking his seat in Canada.

“Yesterday was tough and I had some trouble sleeping, but I’ve woken up feeling positive today,” Hamilton said. “My back is a little sore and bruised but nothing serious thankfully.”

In an Instagram post he said. “I’ve had acupuncture and physiotherapy and I’m on my way to my team to work with them on improving.

“We have to keep fighting. I’ll be there this weekend – I wouldn’t miss it for the world.”

Should Hamilton or teammate George Russell be unable to race this year, their position could be temporarily filled by either Stoffel Vandoorne, the Belgian Formula E driver who previously spent two seasons in F1 with McLaren, or Dutchman Nyck de Vries, also a Formula E driver.

Both Vandoorne and de Vries currently drive for the Mercedes-EQ team in the Formula E world championship.

Fellow Mercedes driver Russell, who has sensationally finished ahead of Hamilton in every race so far this season, does not appear to have suffered the same level of pain and discomfort in the new car. He has, however, also expressed concern about the long-term physical effects of the bouncing.

The Azerbaijan Grand Prix was won by the Red Bull Racing pairing of Max Verstappen and Sergio Perez in first and second place respectively following the retirements of both Ferrari drivers, Charles Leclerc and Carlos Sainz due to mechanical trouble.