HOW hard could it be to build a Lego car? Actually, much harder than you might assume, even if you’ve had experience with Lego Technic sets.

From the outset, we anticipated the build would be a challenge; at 56cm long and 25cm wide, the Chiron set is one of the largest, most complex Lego Technic car models ever produced. It’s also the most expensive vehicle set on sale in its store, retailing for £329.99.

And at nearly 3kg in weight, with 3,599 pieces, the unboxing was a feat in its own right.

Even so, we estimated it’d take one of us about eight hours, or one day in the office. That seemed like a fairly serious investment of time and resource when we started the build, but it proved wildly optimistic. 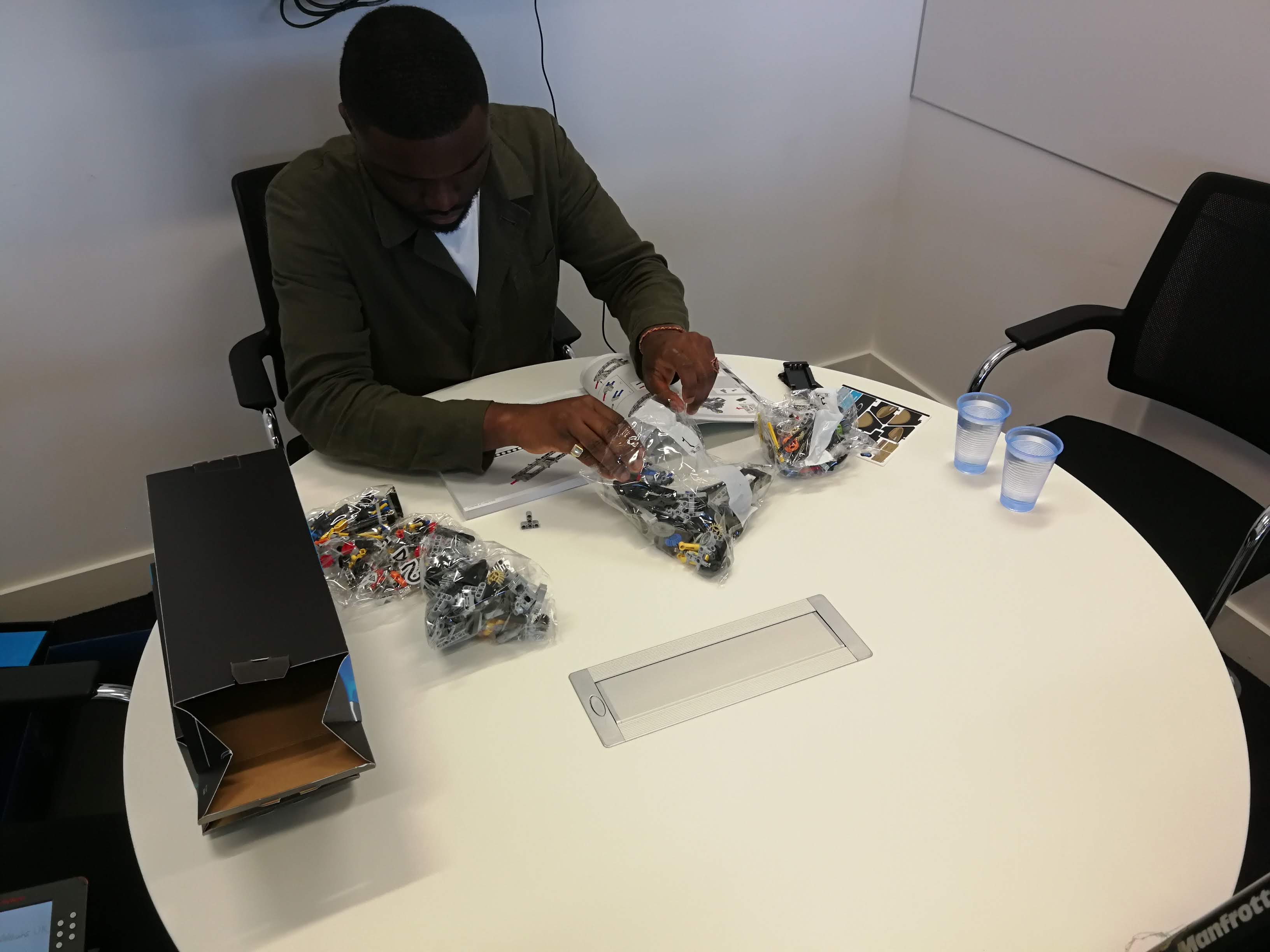 Beya Kabelu stepped up (was pushed forward) for the build. He was optimistic at first but after fours hours, and several misplaced (lost) pieces later, he said he already felt deflated.

Although we knew it was an epic set, we had not expected to build from scratch so many working mechanical elements, including the differentials and gearboxes, and the slightest misstep set Beya back at least 30 minutes, he told us. 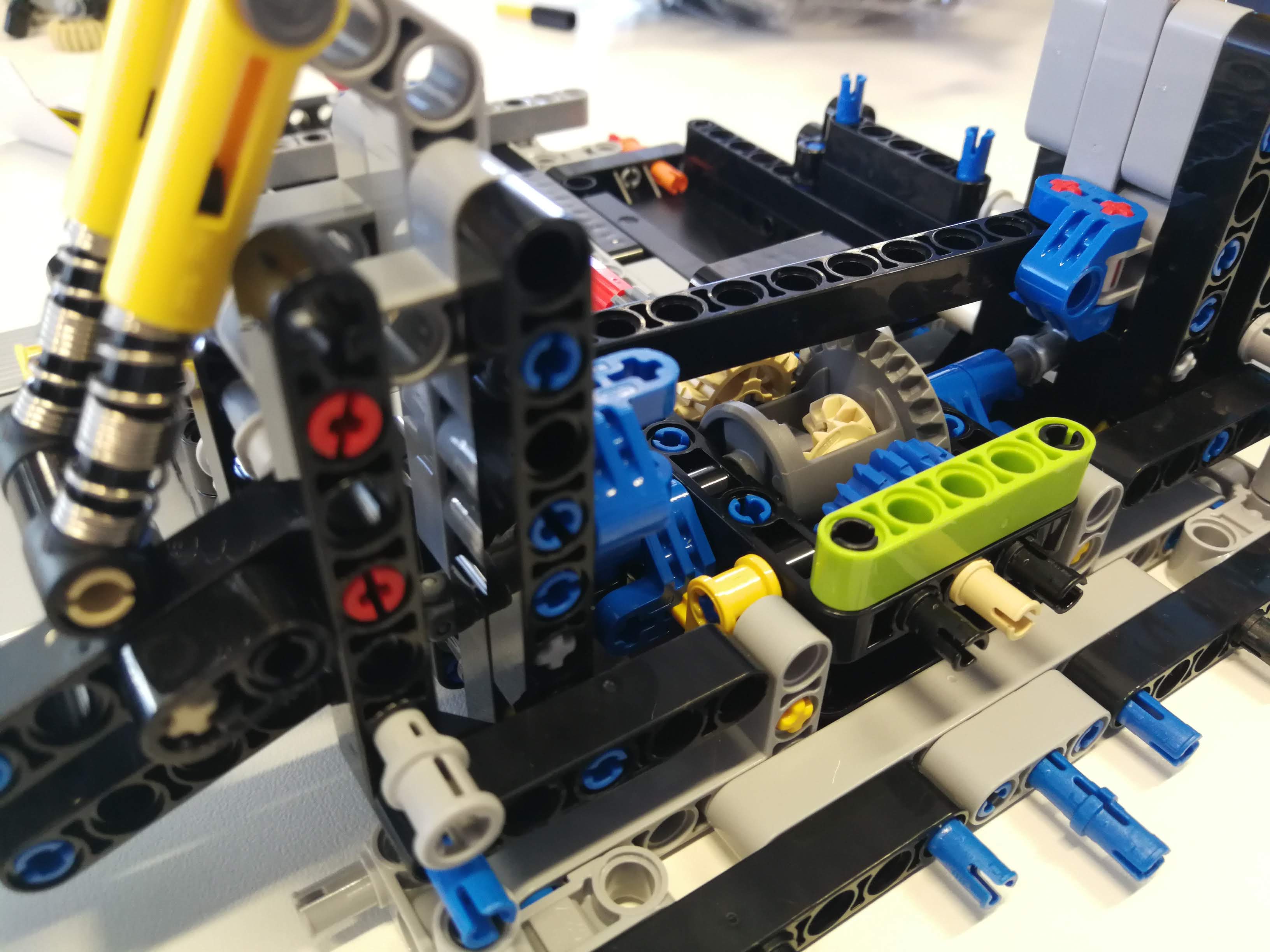 Every element needed to function, every cog needed to fit together and move freely. The care needed was extreme. The worst fear was that we’d complete the build and then find something didn’t work, meaning we’d have to take the thing apart again. That might have finished us off. 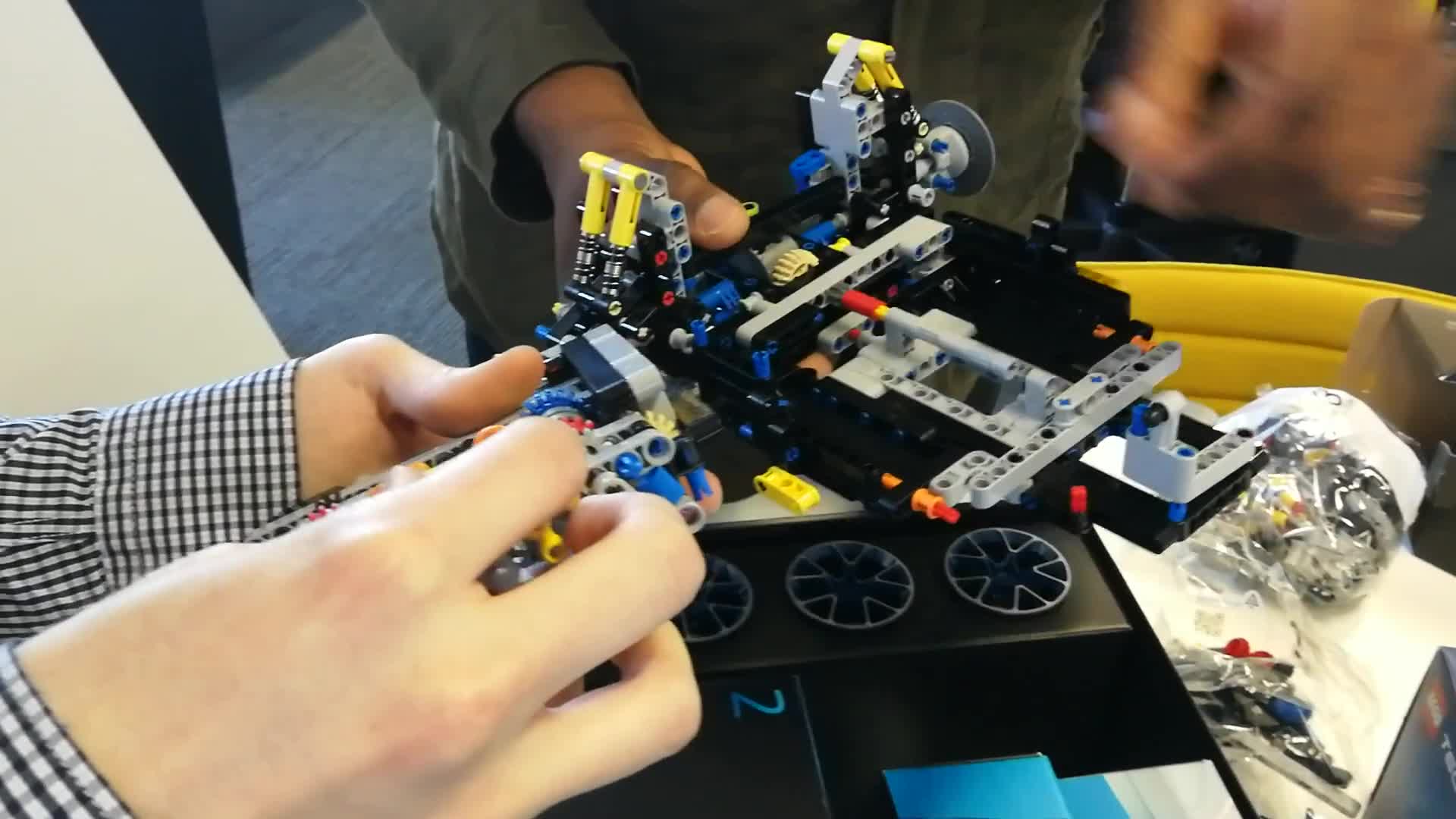 Beya shows us his handywork.

After six hours, having built the rear chassis and suspension elements, along with part of the transmission, Beya called it a day and we steeled ourselves for a second run at it the following morning. 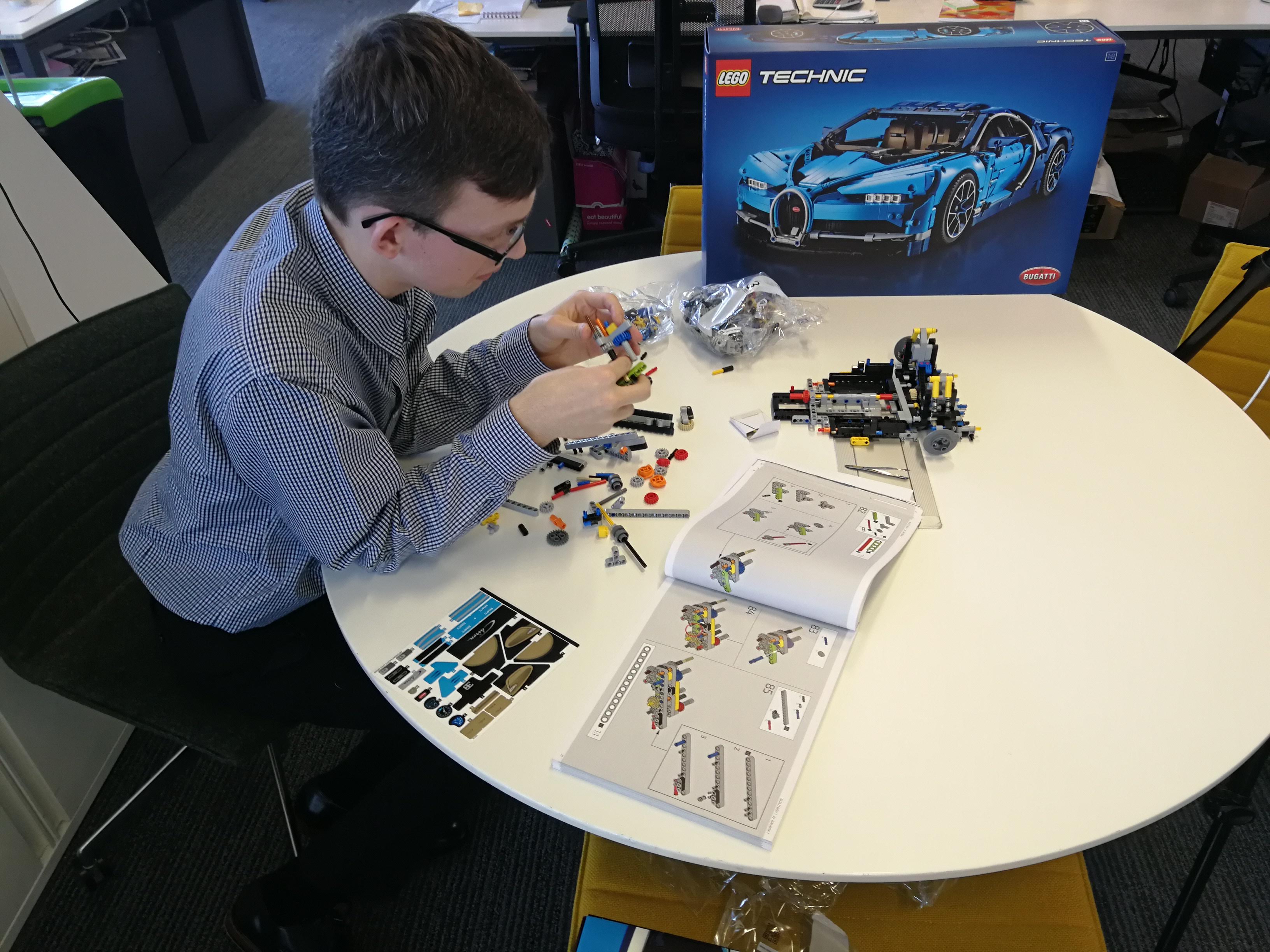 James Allen took on the Chiron for day two. Even as he got started we knew it’d probably roll over into the weekend, but James was asked to crack through as much of the work as possible so that we could finish any final touches over the weekend and move on to some actual, proper, motoring journalist work — a few eyebrows around the Sunday Times office were beginning to raise when it was noticed we were still playing around with Lego. Yes, this was work, we assured them. 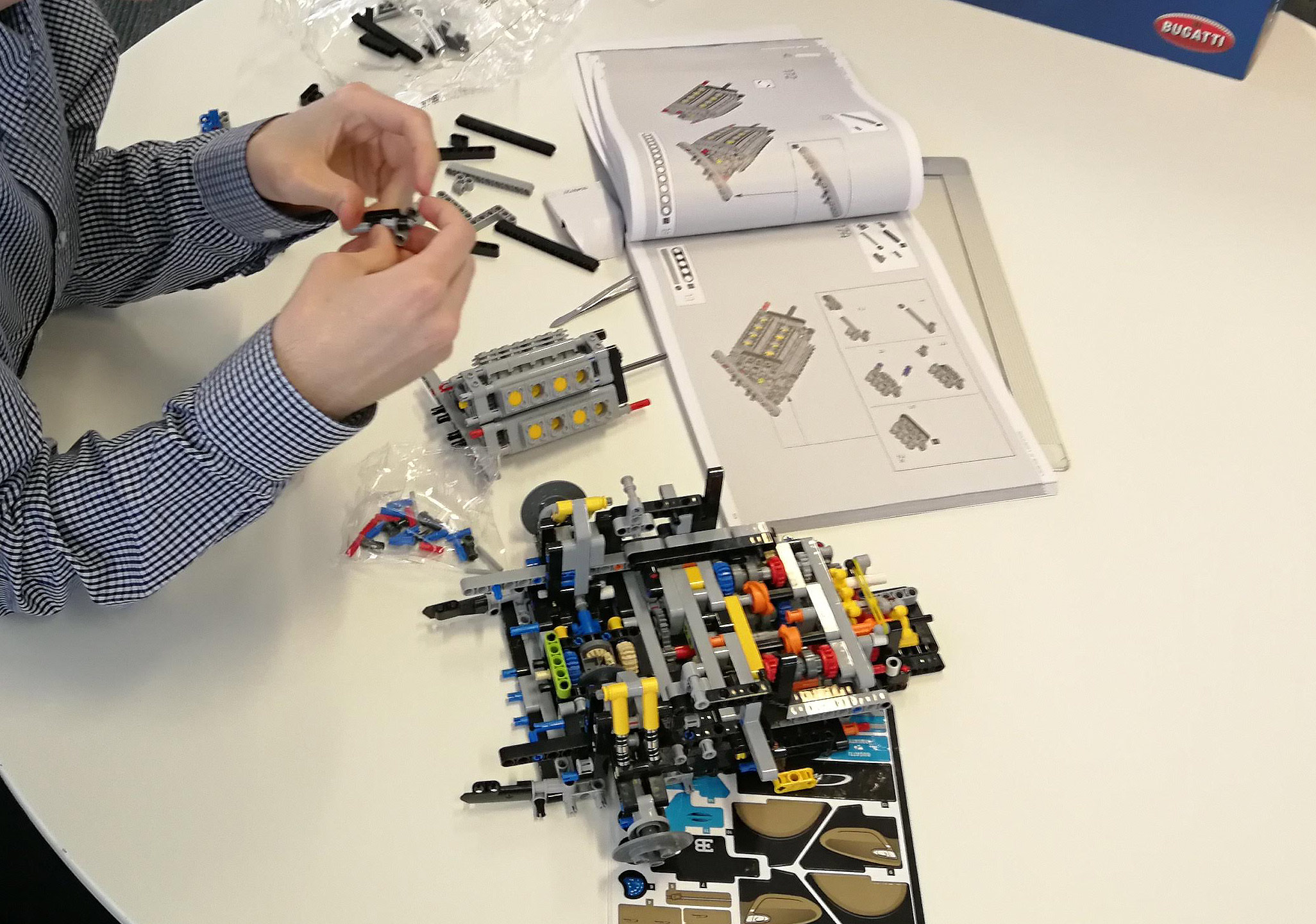 That really is a working eight-speed transmission, controlled via paddles from the cockpit. Engage first and push the car, and the 16 cylinders move up and down in sequence.

James spentsix hours on it during the day. He completed the eight-speed transmission and joined it to the rear section of the chassis, connecting the driveshaft, and built the engine mounts as well as the W16 engine itself. This was one of the more technical parts of the project but clearly, there was a LOT more to do. 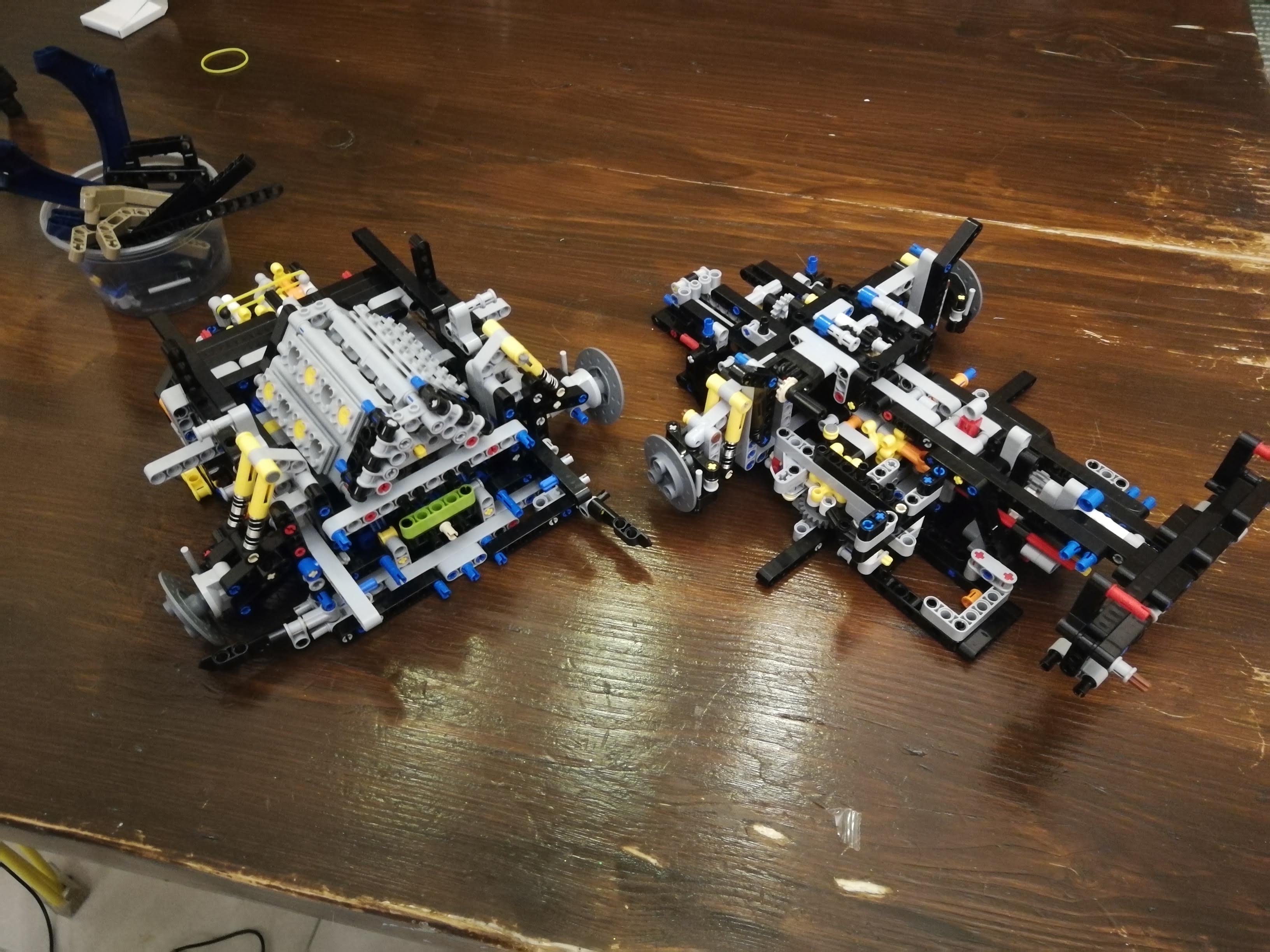 I took the set home over the weekend, hoping to complete it myself before Monday. Other commitments only left me with a window of opportunity late on Sunday evening to get the job done, though.

I managed to mount the engine (James was just one step away from doing this himself but he left the honour to me; what a gent) and set about building the front part of the chassis, suspension elements, paddle shift mechanism and steering rack. Progress. 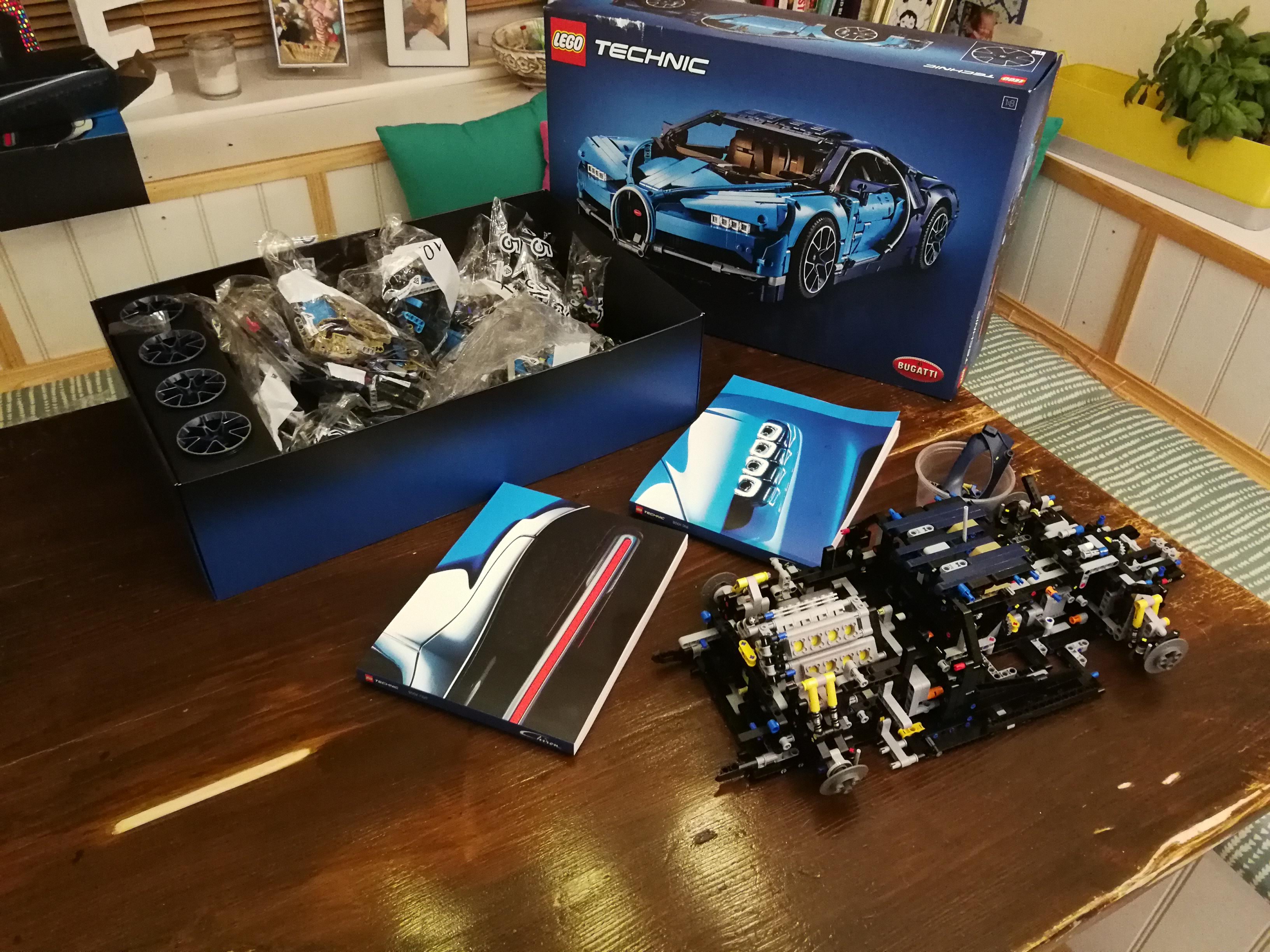 Some more work on both front and rear sections before connecting the two in what is called “The Marriage”. It marked the end of book one of the instructions and therefore a significant milestone in the build.

Uniting the engine and driveshaft with the front of the car, which includes the paddle shifters and drive select (forward-neutral-reverse) meant carefully aligning several elements, which I managed before a piece dropped out from somewhere, which was concerning. 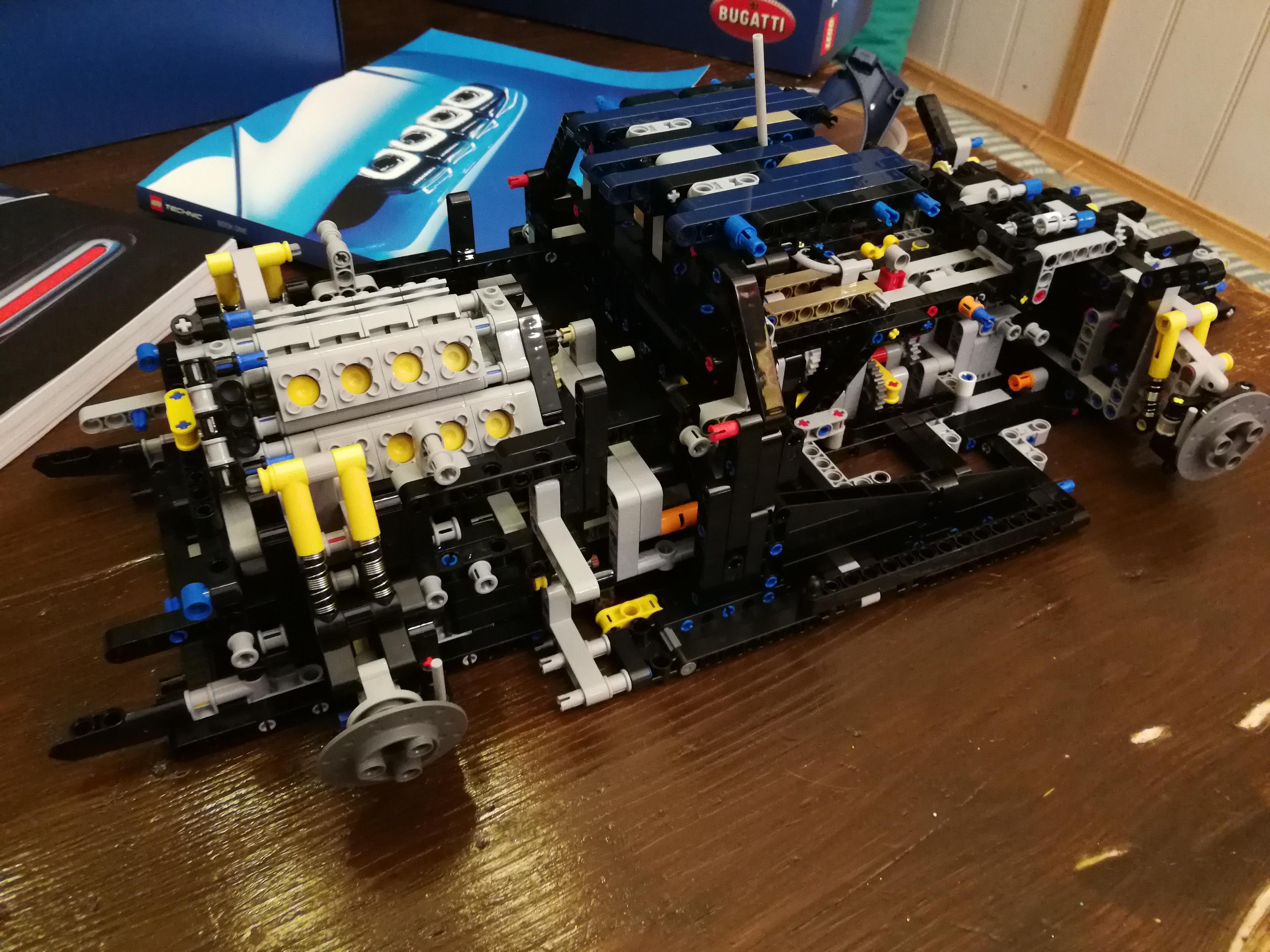 I disconnected the sections again and carefully checked everywhere but couldn’t work out from where this black connector piece, which fits between two rods, came. I concluded it must have been a bit that James or Beya had misplaced somewhere within the set at some point, and dislodged when I turned it over. I hoped that was the case, anyway, then remarried the front and rear sections. Two weddings in one evening — it was all go. 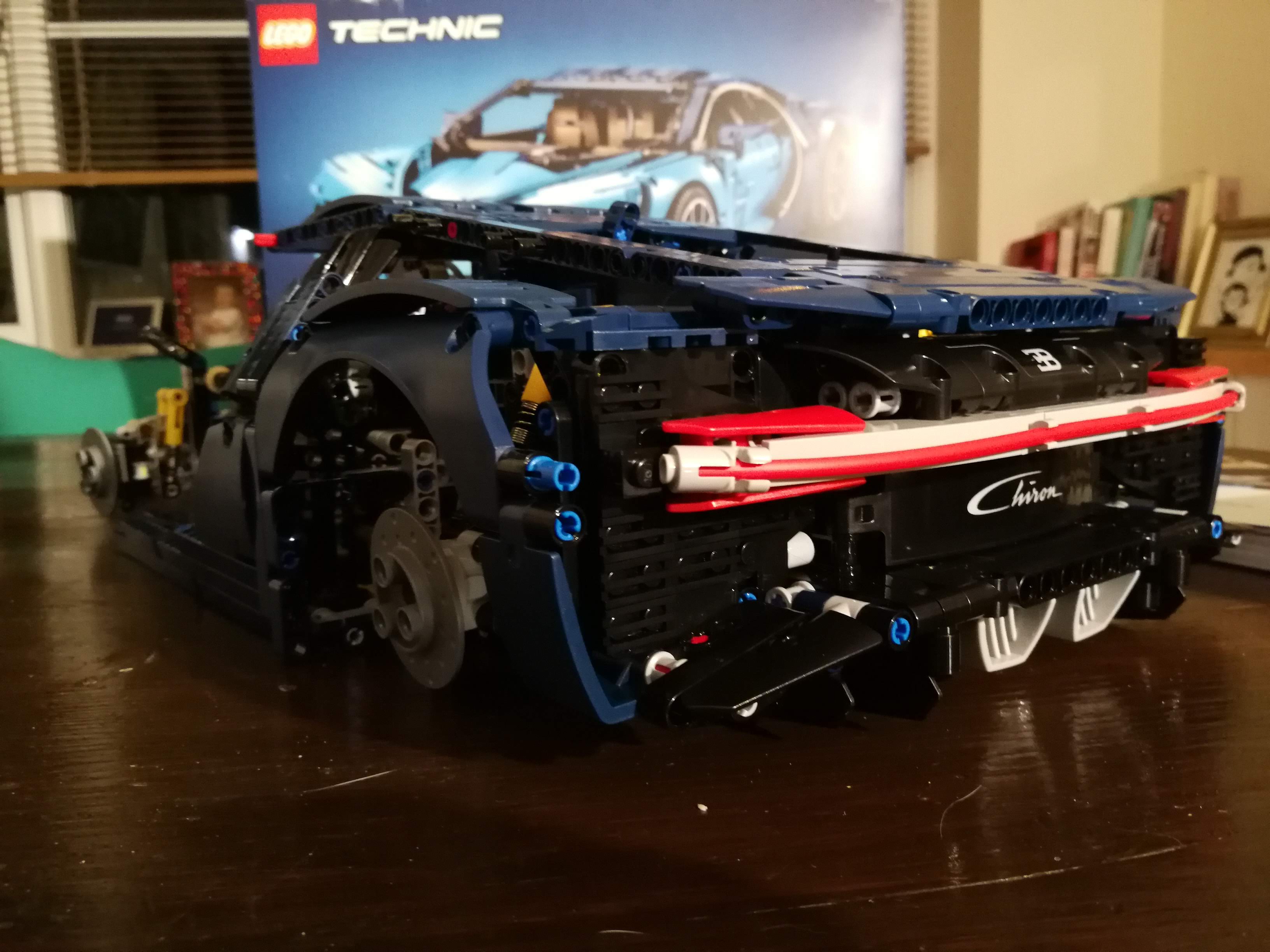 The third evening building from home comprised mainly finishing off the rear of the car, including the active wing at the rear, various aero elements and the rear light strip, but some other body panels started going on, making it look much more like a finished article. Still plenty to do, but it had to be easier from here on, right? 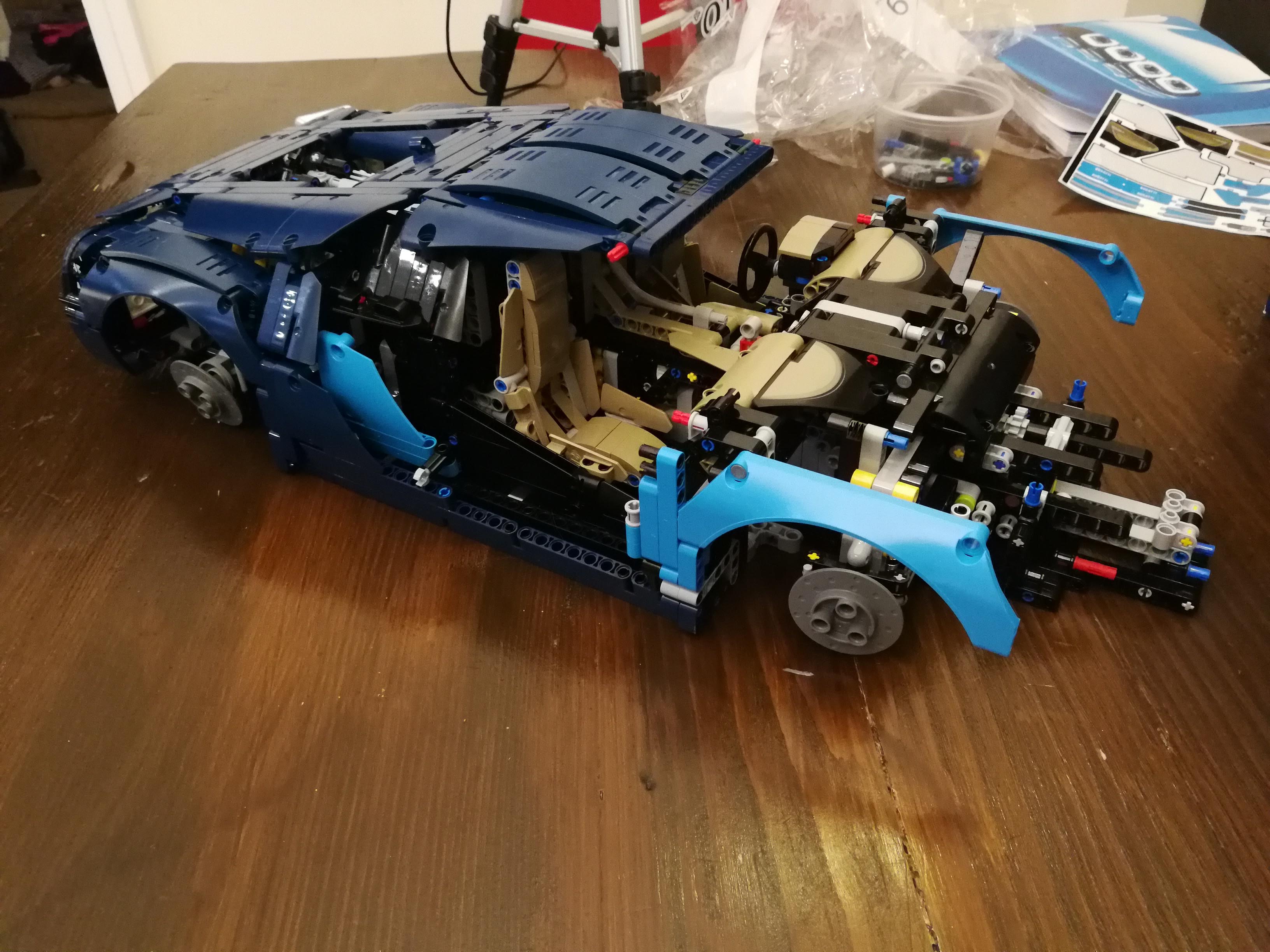 Another intensive late-night build session saw the interior completed, including the two seats and the addition of the steering wheel and various other elements to the front.

The levers below the steering wheel are the paddle shifters. Pull back on the right side to change up, pull back on the left to change down. The lever in the central console engages forward, neutral or reverse gears. Stick it in neutral and the pistons don’t move when you push the car forward. 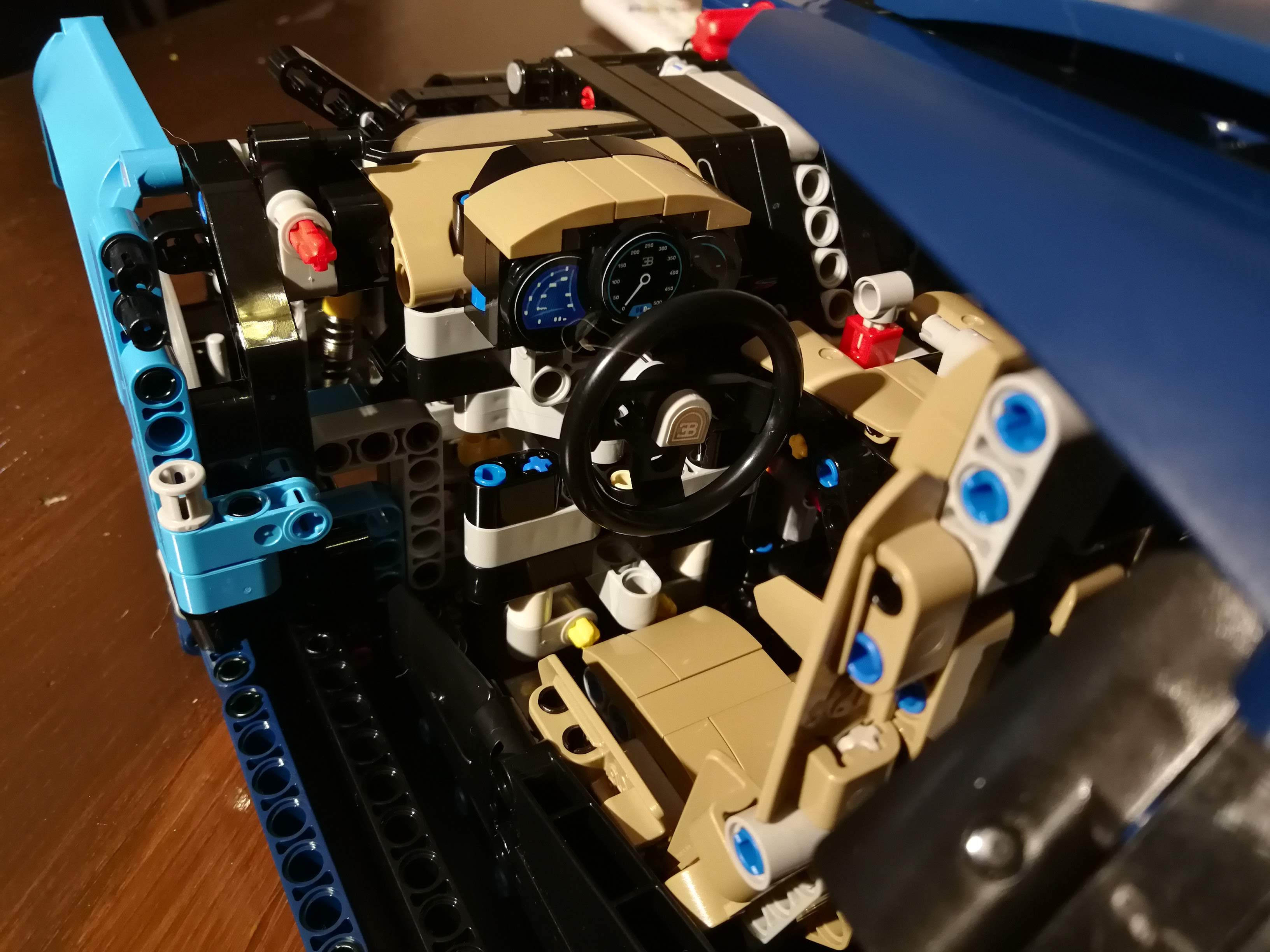 There were some other nice touches here, courtesy of the sticker pack, including the instrument binnacle with the speedo going all the way up to 500kph.

One final push should do it… 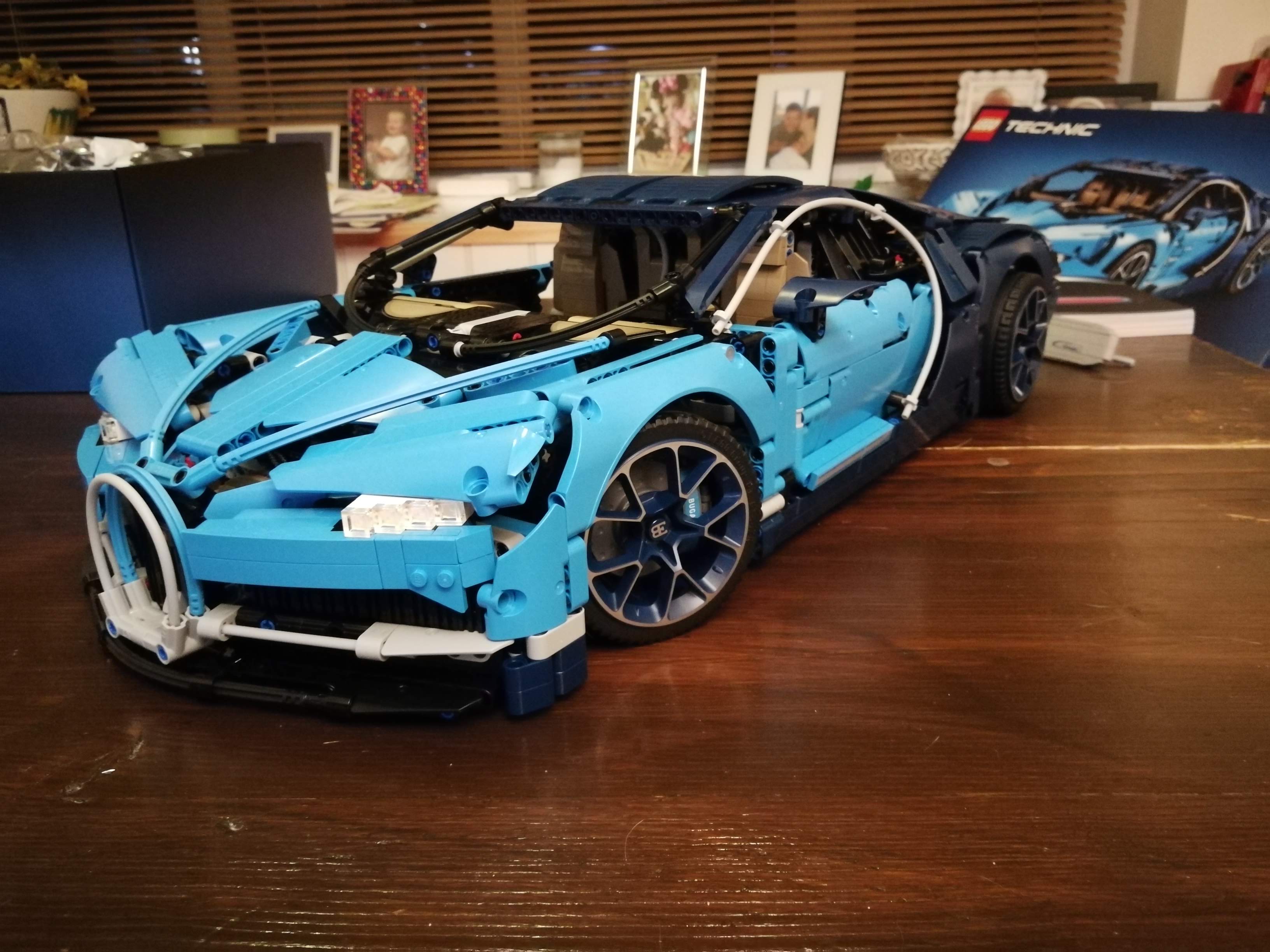 Et, voila. Doors on, front bodywork and light clusters complete, and overnight bag (looks more like a handbag) added under the bonnet.

All in, it took us 27 hours to build the set, so our initial prediction of eight hours was ridiculously optimistic. Hindsight is a beautiful thing, but also, too, is the final car, we think. It was worth it, and the set will now take ride of place in the Sunday Times Office — away from the reach of my children. This is not for kids, obviously. Not little ones, anyway.

Now what? Well, we hear there’s another massive Lego set on the way… might get some sleep in first.