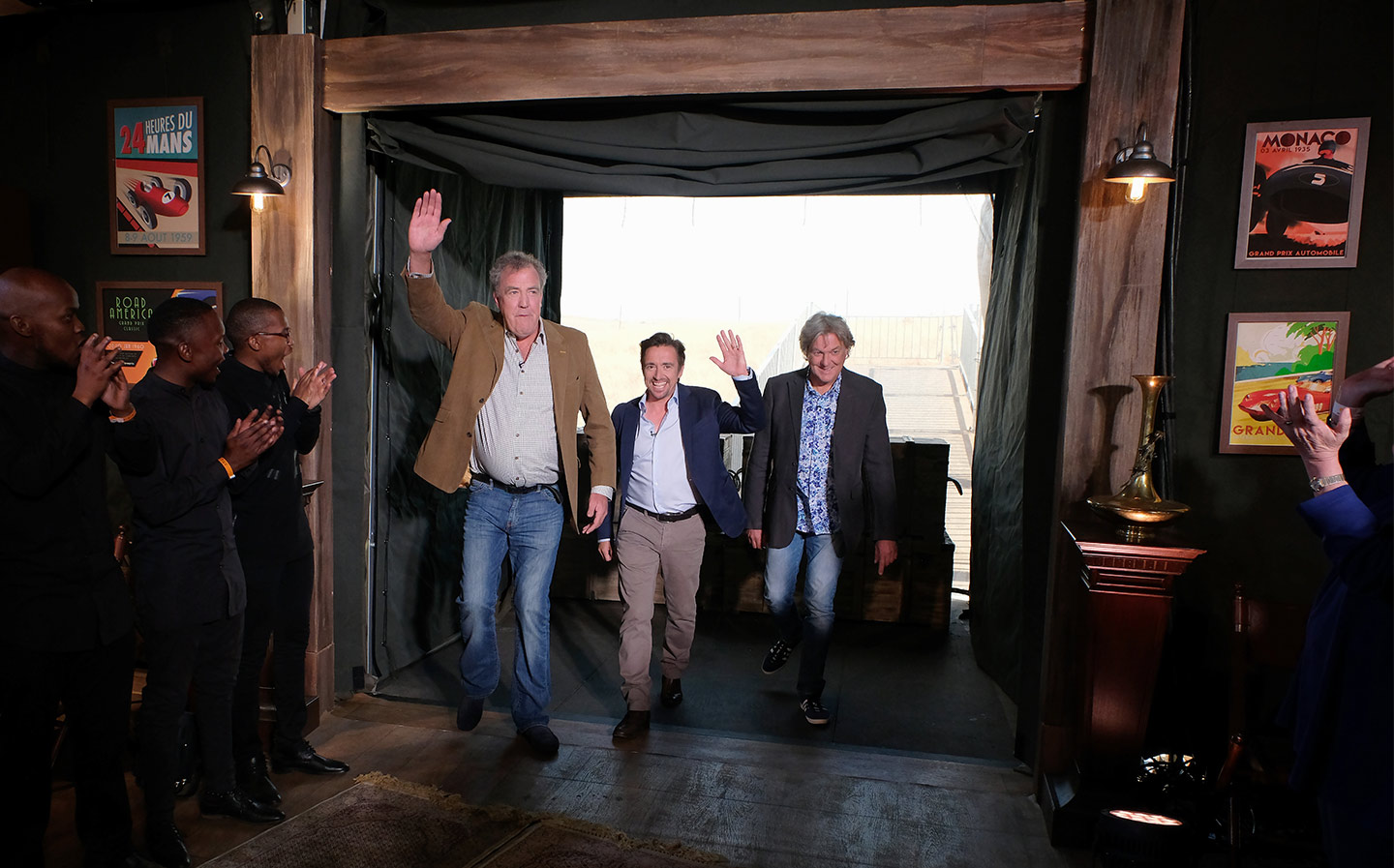 WITH THEIR greying hair, expanding waistlines and aching limbs, Jeremy Clarkson, James May and Richard Hammond have at times given the impression that the furthest they should travel is to the local tea rooms, for a cuppa and natter.

Now the presenters of The Grand Tour have announced a change to their Amazon show’s format: its roving TV studio is staying put – in the Costwolds.

The move comes after a spate of off-screen dramas. In June, Hammond was airlifted to hospital, after the electric supercar he was driving, at a hillclimb course in Switzerland, skidded off the road and rolled down a hillside.

And in August, Clarkson was struck down with pneumonia – later writing in The Sunday Times that he was “on death’s door”.

Perhaps unsurprisingly, the presenters and the production team behind The Grand Tour have decided to ease off the throttle. For the second series, all studio scenes will be filmed in the distinctive safari tent that is home to The Grand Tour, but it will be permanently based in the UK.

The choice of the Cotswolds is not only down to its renowned selection of tea rooms. It is convenient for all three presenters, and The Grand Tour’s production office is based in West London.

“Despite the various calamities and injuries along the way, the guys have spent this year exploring more incredible and stunning locations than ever before”

However, Andy Wilman, the executive producer for the show, reassured fans that there would be more roadtrips and escapades than ever before.

“It’s clear that the most popular Grand Tour element of the show is when the chaps are roaming the globe on their big adventures and road trips, so that’s what we’re doing a lot more of for this series,” said Wilman.

“We’ll keep the studio in one place, and given how accident-prone they are at the minute, that can only be a good thing!”

The logistical challenge involved in moving the studio from country to country was revealed by Jeremy Clarkson, writing about the moment he had the idea for the television show’s new format:

“…the tent would have to be huge. A Las Vegas circus marquee, only bigger. And do you have any idea how much it would cost to fly such a thing from location to location? Especially if we folded it away when it was wet and therefore heavier than a mountain?

“It turned out we couldn’t fold it away when it was wet because the fabric would rot. And then we discovered that we couldn’t break it down in one place, load it on a plane and have it built somewhere else in a week. So we’d need two tents, which would leapfrog one another from location to location. And then the director pointed out that we’d need a solid floor for his cameras to rove around on, on their little wheels. And that would mean two solid floors, each of which would weigh more than Asia.”

Clarkson revealed that the show attracted sponsorship from DHL, to cover the transport costs.

Jay Marine, vice president of Amazon Video Europe, said: “Customers continually tell us that their favourite segments of The Grand Tour are the travelling adventures of Jeremy, Richard and James, so despite the various calamities and injuries along the way, the guys have spent this year exploring more incredible and stunning locations than ever before… and getting into more trouble of course.”

Fans of the show can apply for tickets to watch studio recordings in the tent, in the Cotswolds, by visiting Amazon, before October 4.