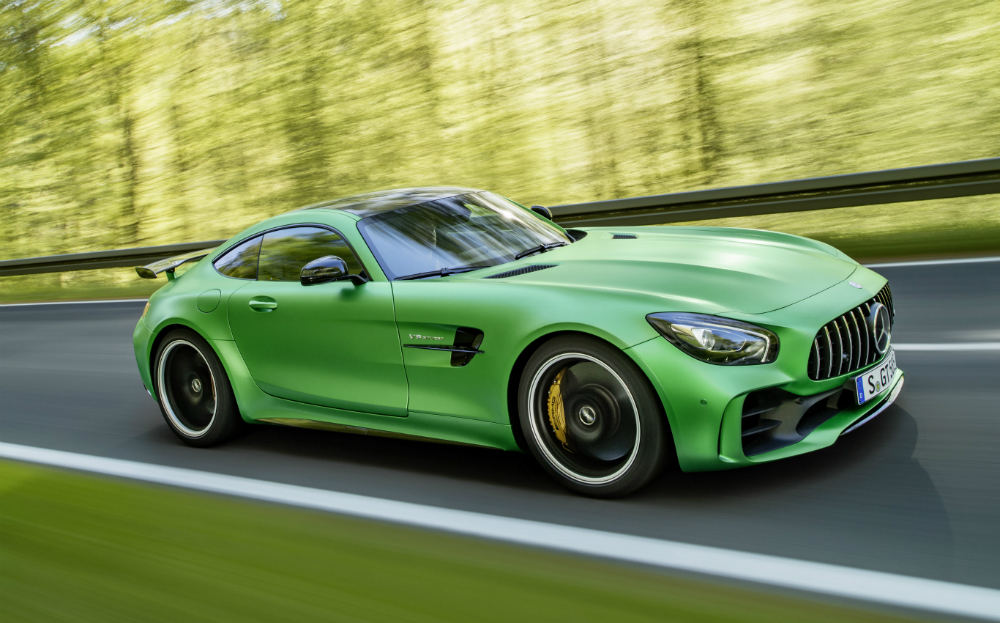 This is the new R version of the Mercedes-AMG GT. It is very green, and very mean… 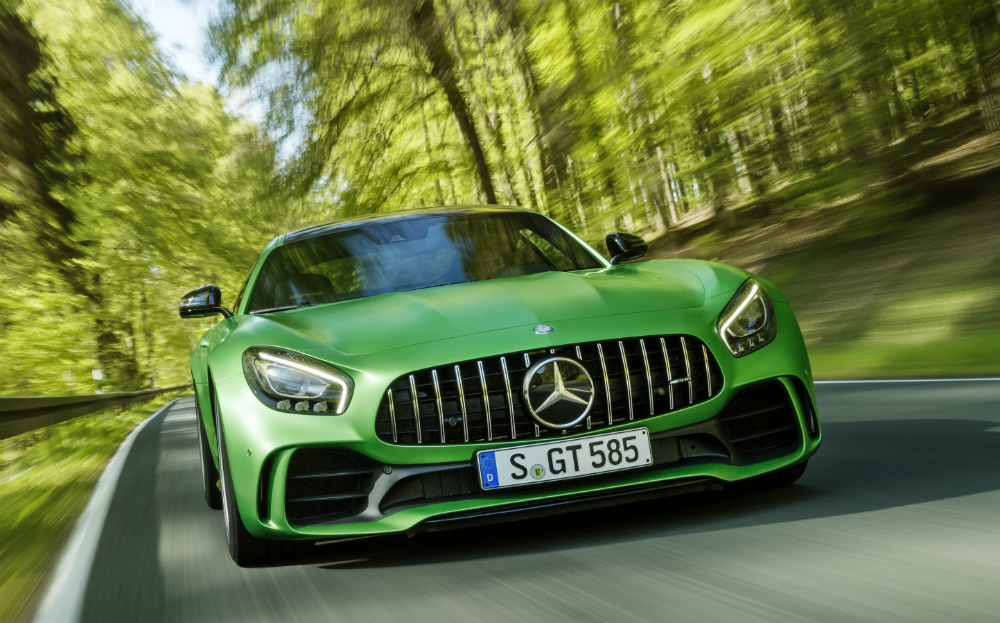 The new model is a rival to the Audi R8 Plus, Jaguar F-Type SVR and Porsche 911 GT3 RS 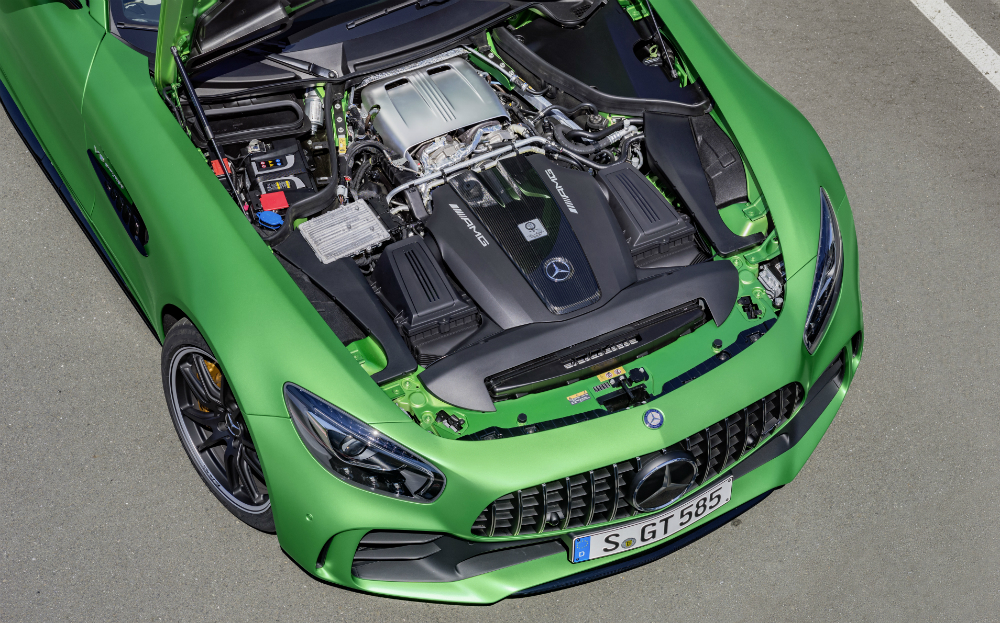 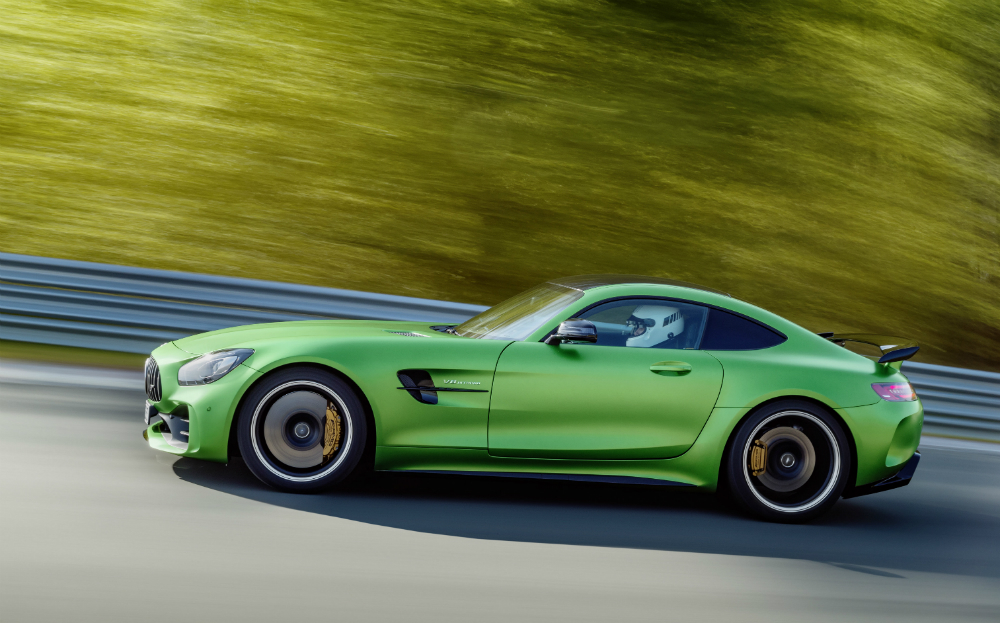 To keep the engine's power in check, the chassis has undergone substantial modifications… 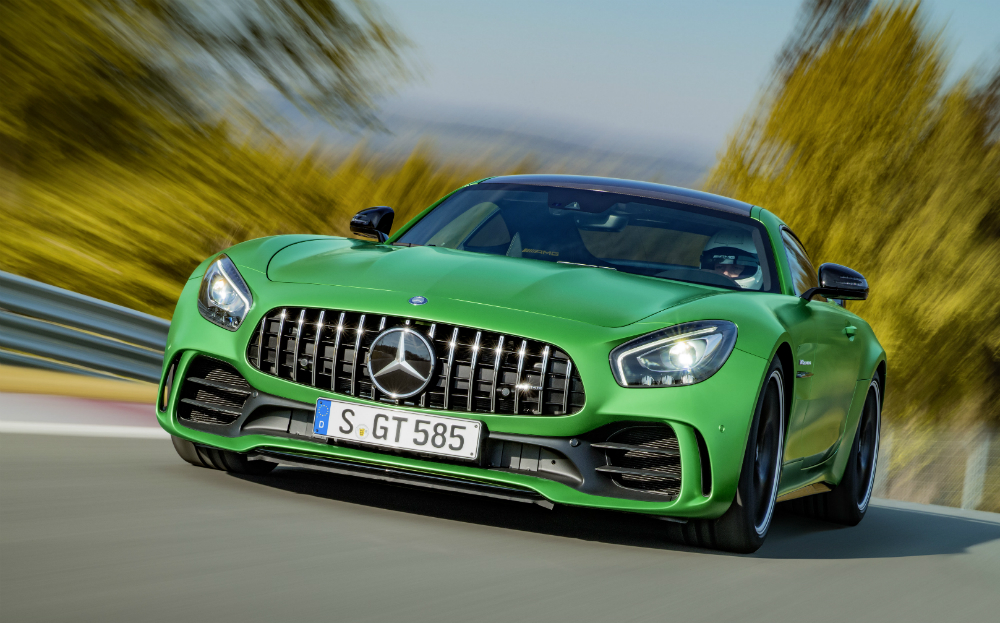 The wider body allows for wider front and rear tracks, there is rear-wheel steering 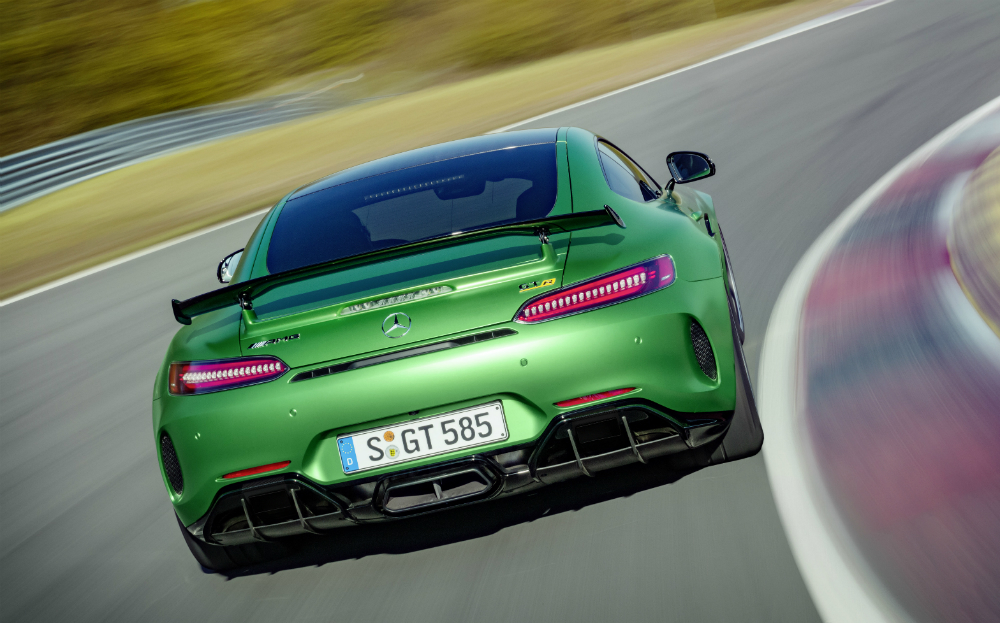 A bodykit adds downforce and stability at speed, while the R is a little lighter than an S, by 15kg 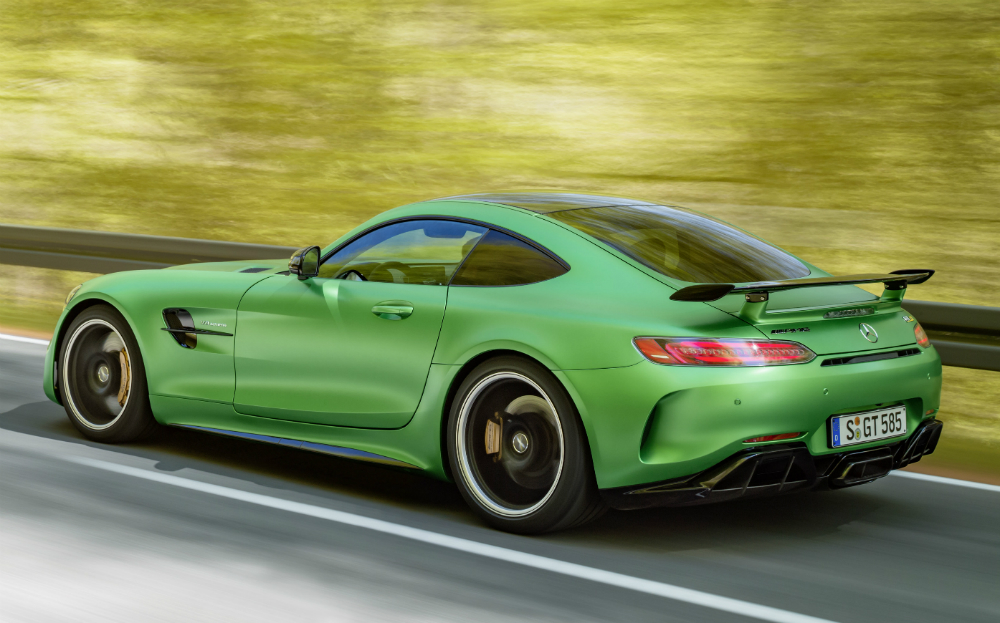 The traction control system offers not one, or even two modes for drivers, but a total of nine choices. We imagine that means they range from "A bit scared" to "Death or glory" 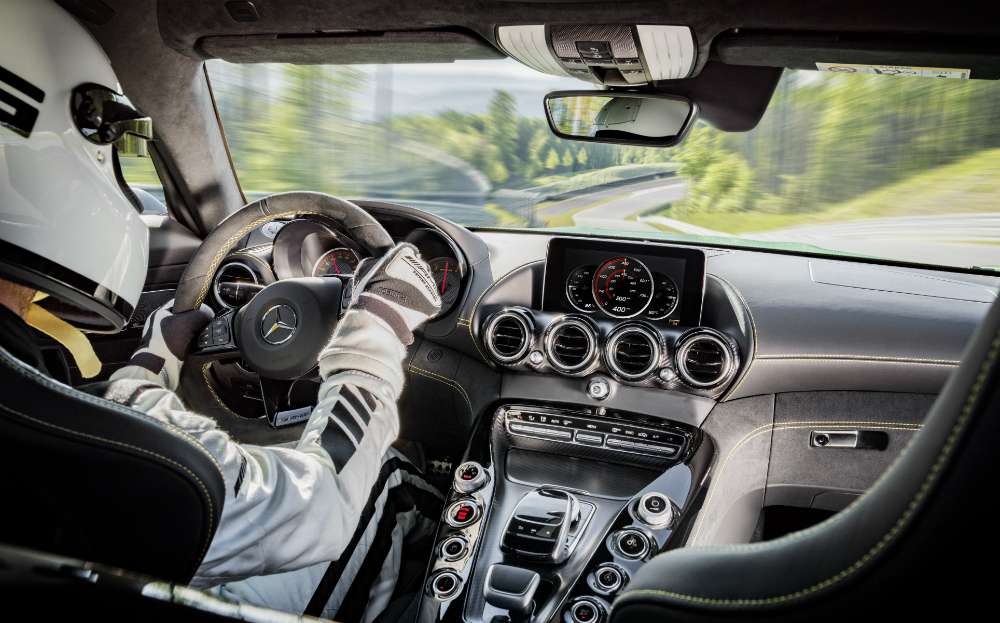 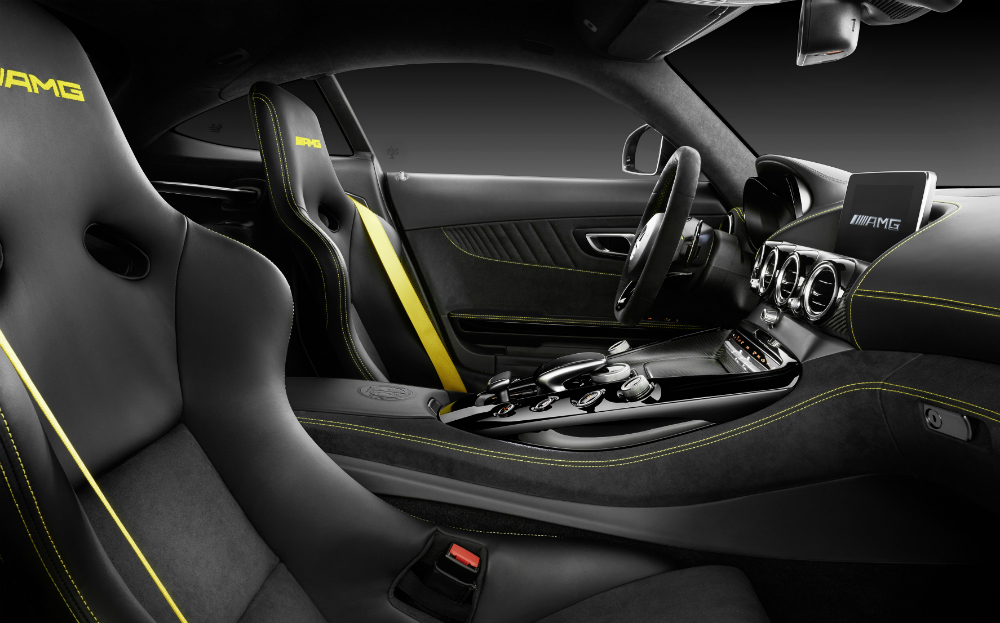 The shift times of the AMG 7-speed automatic gearbox have been reduced, and the final drive and seventh gear have been shortened to help improve acceleration 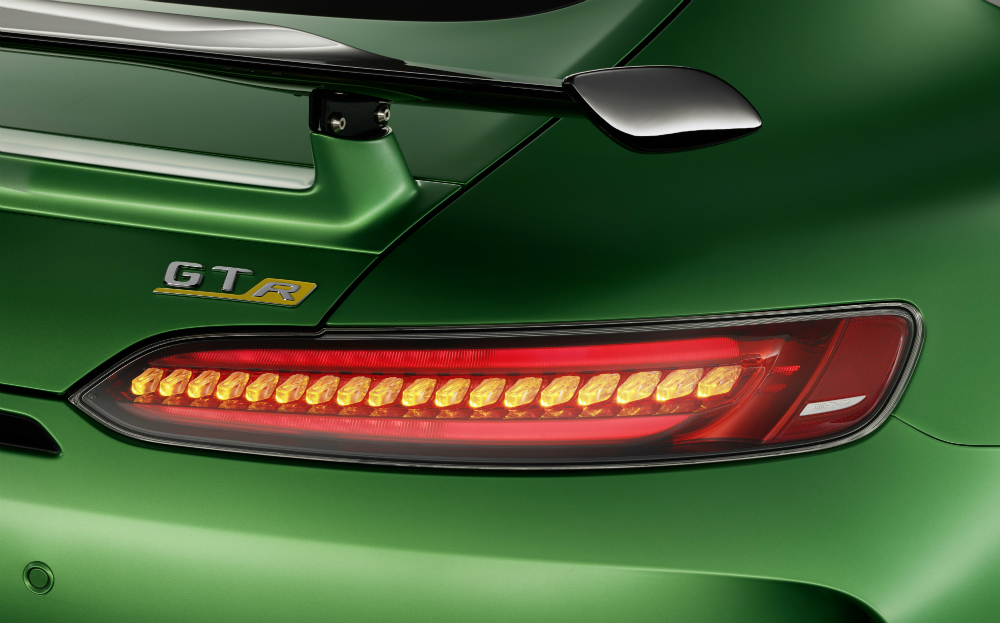 Active aerodynamics package includes a front wing that lowers itself at 50mph; there's also a fixed rear wing, which needs a bit of spannering to adjust, as shown in this picture 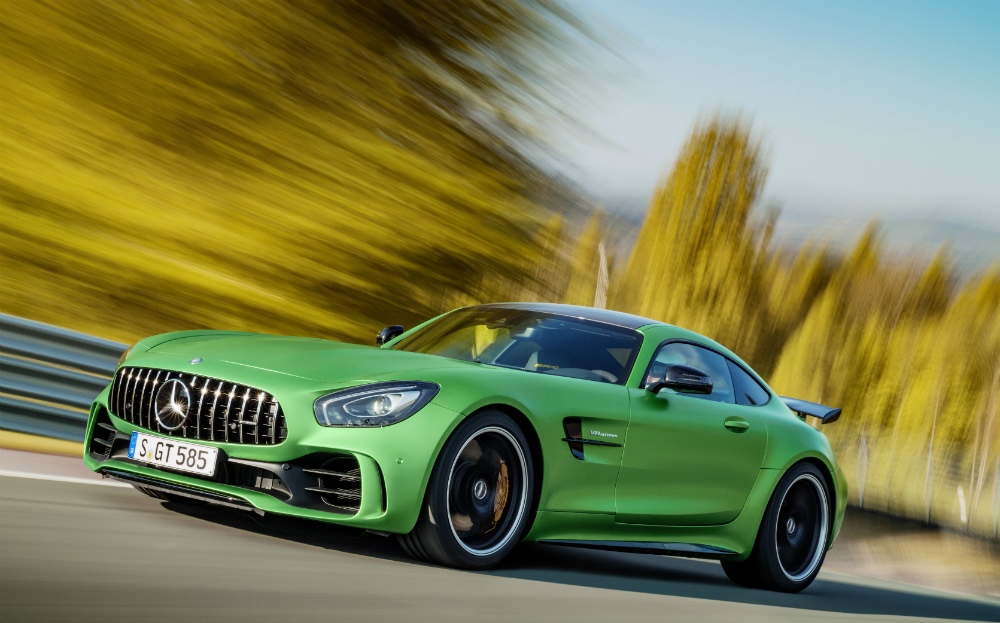 The Mercedes-AMG GT-R goes on sale in November, priced from around £140,000; deliveries begin in the Spring 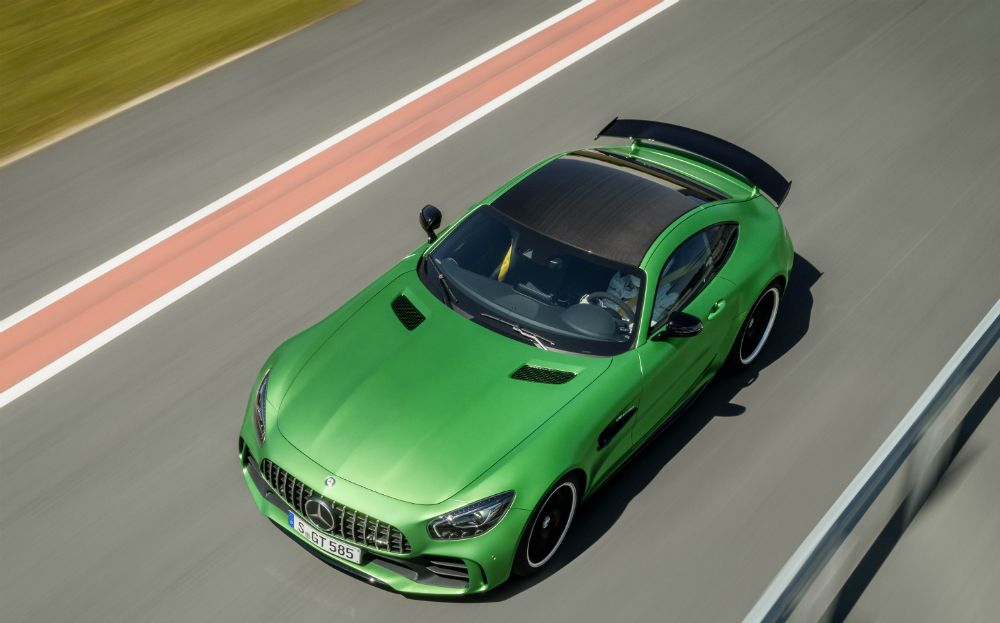 If the R isn't enough to satisfy drivers' thirst for performance, a Black Series version of the R is in the pipeline

WHEN THE bosses at AMG told Mercedes that they’d like permission to build a new green machine, it’s likely that the coffee and biscuits would have been sprayed across the boardroom table. But once the new GT R supercar was wheeled into the room, everything would have become clear – and very green.

This is the new, ultra-high performance version of Mercedes-AMG’s GT. Called the R, it is positively loaded with technology, bristling and power and promises to be a rare and sought-after machine when it goes on sale in November. But the most contentious talking point is likely to be the Kermit-green paintwork.

Mercedes-AMG says it has chosen the colour to reflect the car’s breeding – not with a frog, but at the Nürburgring Nordschleife, the daunting 14 mile race track that was nicknamed The Green Hell by Jackie Stewart, the British three time Formula One World Champion.

View the Mercedes-AMG sports cars for sale on driving.co.uk

The paintwork is called “AMG green hell magno” and the German company makes no apologies for choosing the sort of colour that will do little good for a passers-by suffering a hangover.

Flagship of the Mercedes-AMG GT range, the R will compete with the likes of the Audi R8 Plus, Jaguar F-type SVR and Porsche 911 GT3 RS. It’s likely to cost around £140,000, and will be followed in time by an even more extreme version, called the GT R Black Series.

The only thing it doesn’t appear to come with is an annual pass to drive at the Nürburgring.

View the giant gallery, above, to find out all about the very fast, and very green, GT R.