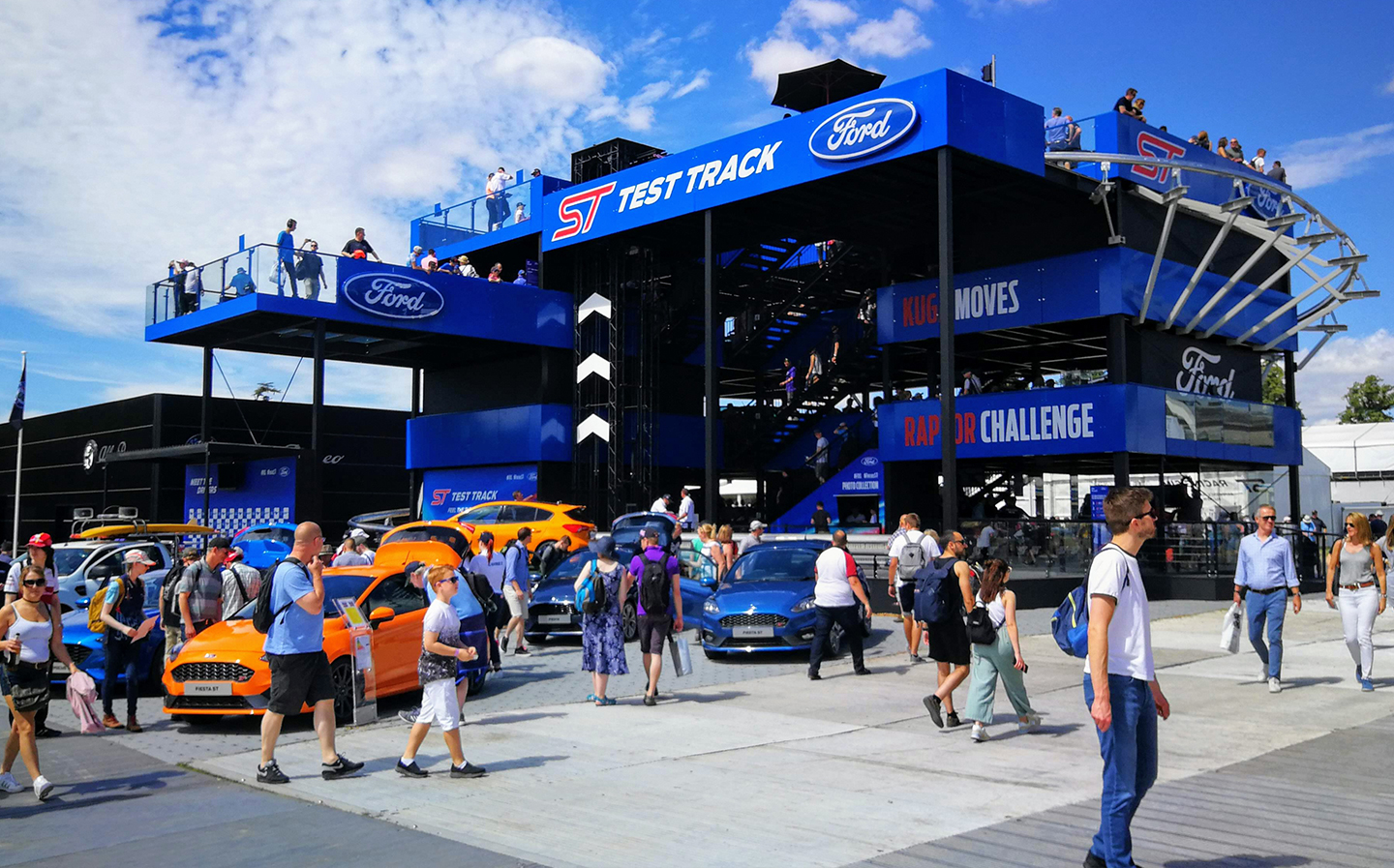 IF YOU’RE wondering why there isn’t a proper British Motor Show any more, you don’t have to look much further than the Goodwood Festival of Speed.

Take a walk around the car maker stands (or “booths”, for our US readers) and you notice just how much money and effort manufacturers pour into the event — it boggles the mind.

The erections are huge (steady now) and not only are they packed with the latest cars — in some cases making their world debut — this year they also included rooftop lounge areas, slides, games arcades, video experiences, live action stunts and even, in one case, a toboggan run that twists around the outside of the building.

These were the four best car maker stands at Goodwood this year: 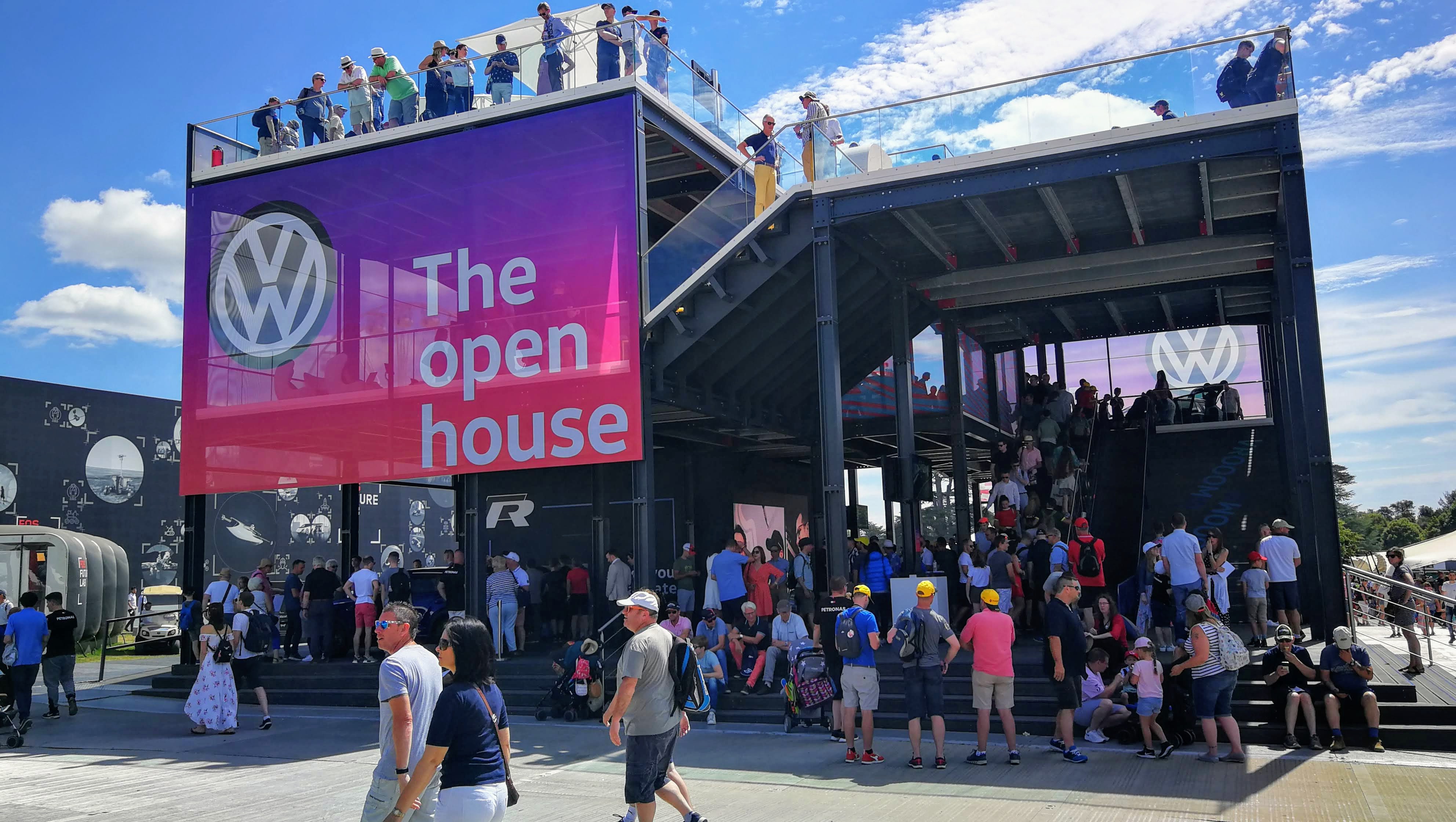 VW’s stand, spanning four levels, had a clever system of stairs that forced visitors up through the building, experiencing each area before finding their way back down and out the other side. 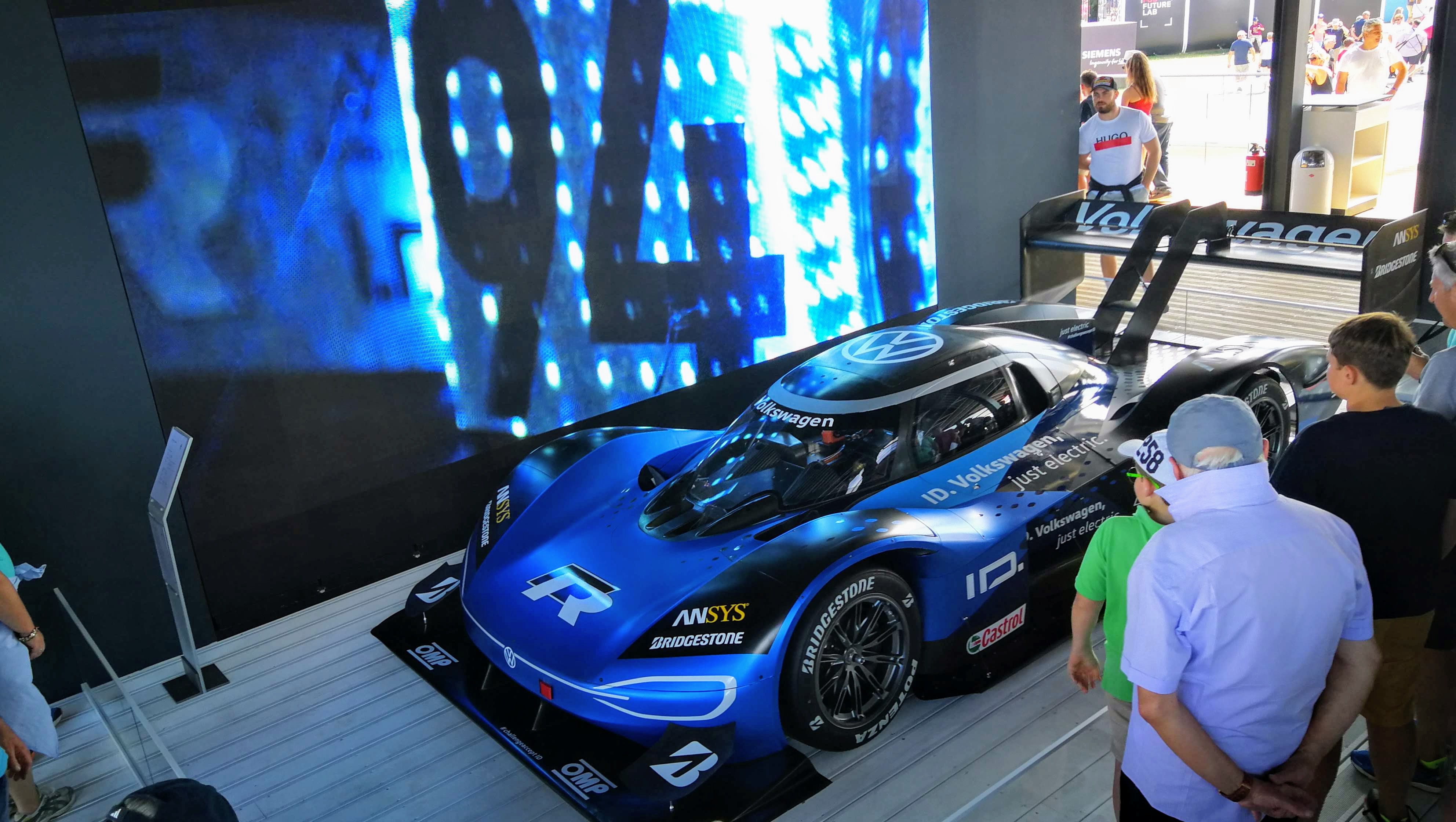 Electric cars was the clear theme, with the big attractions for motoring enthusiasts being the ID.BUZZ electric campervan, the ID.Vizzion autonomous car concept, a camouflaged version of the forthcoming ID.3 hatchback and the incredible ID.R hill climb machine, which managed the first ever sub-40sec time up the Goodwood Hill during Saturday’s timed Qualifying session. 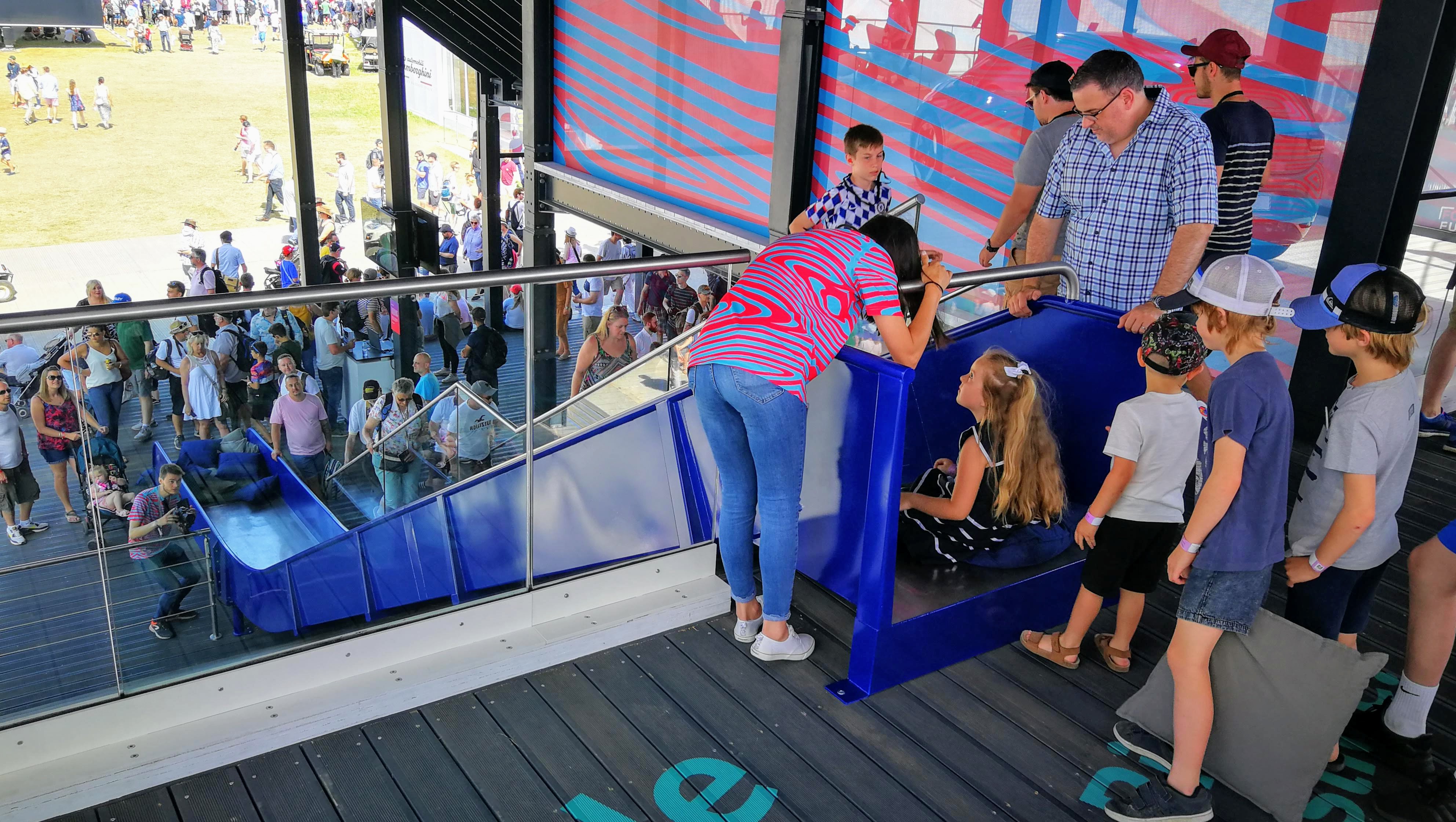 There was fun for the kids by way of a slide from the first floor to the ground level, three electric ride-on ID.3s and a giant swing. 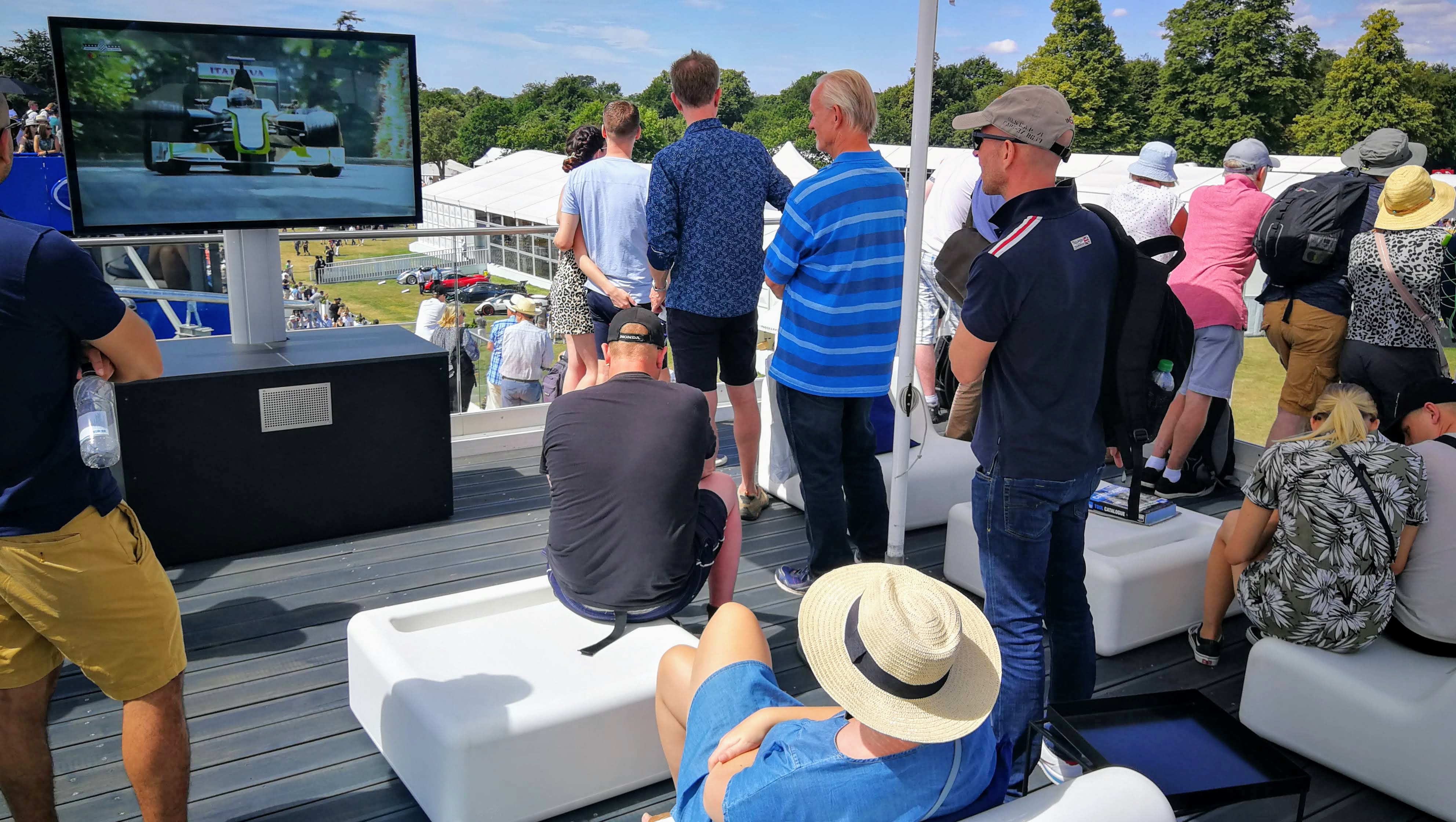 For grown-ups, lounge space was in abundance, with many punters choosing to take a break from the heat of the first part of the weekend in VW’s chill-out areas, which included TVs showing live coverage of the event. 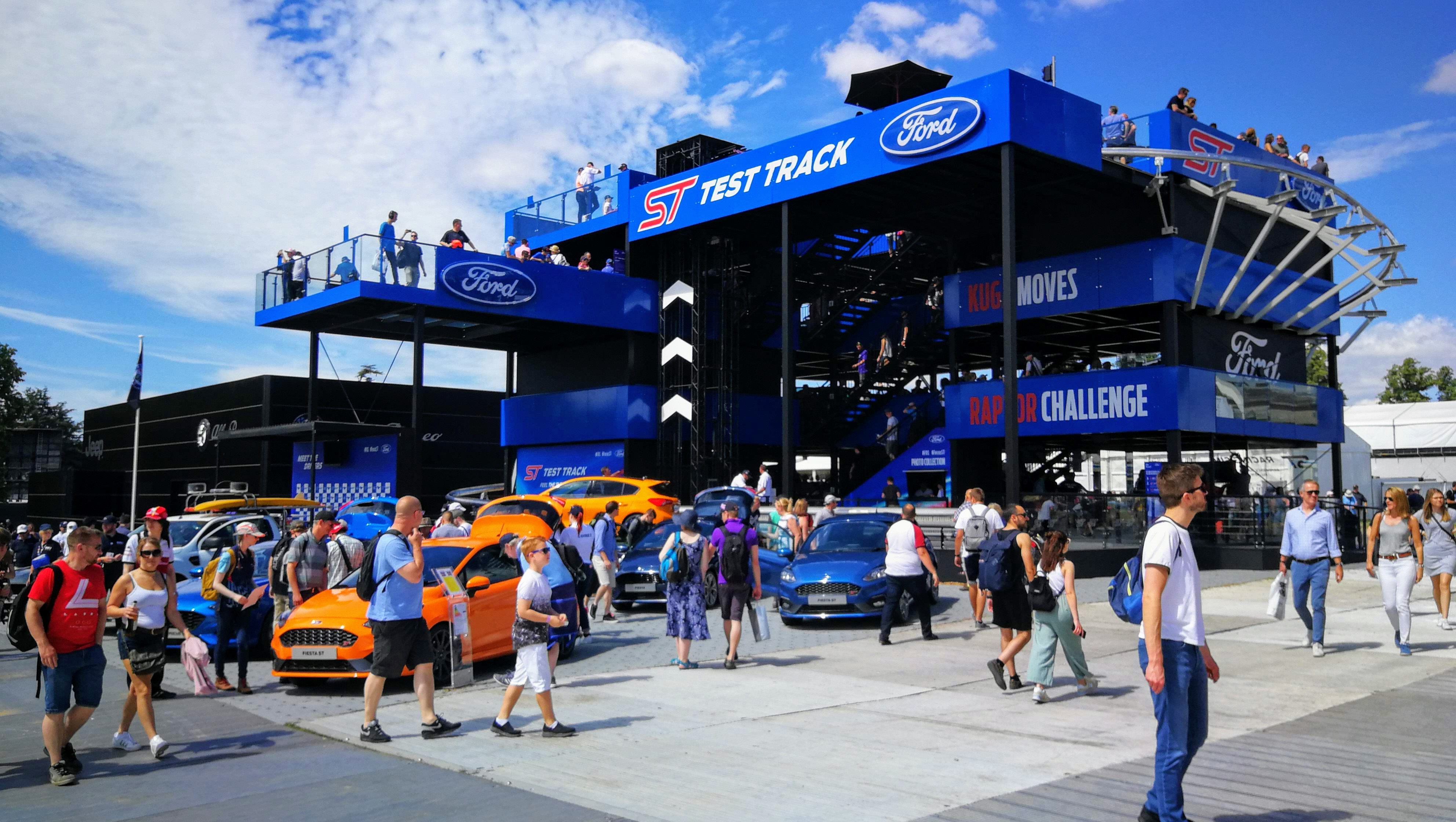 Ford tells us work started on it 2019 FOS stand immediately after the 2018 stand was broken down. The four-tiered goliath took three weeks to build and included new cars like the Focus, Fiesta, Mustang GT, but also gave the public their first chance to see the new Focus ST hot hatch, new Ranger Raptor and new Puma (now a compact SUV rather than a coupé). 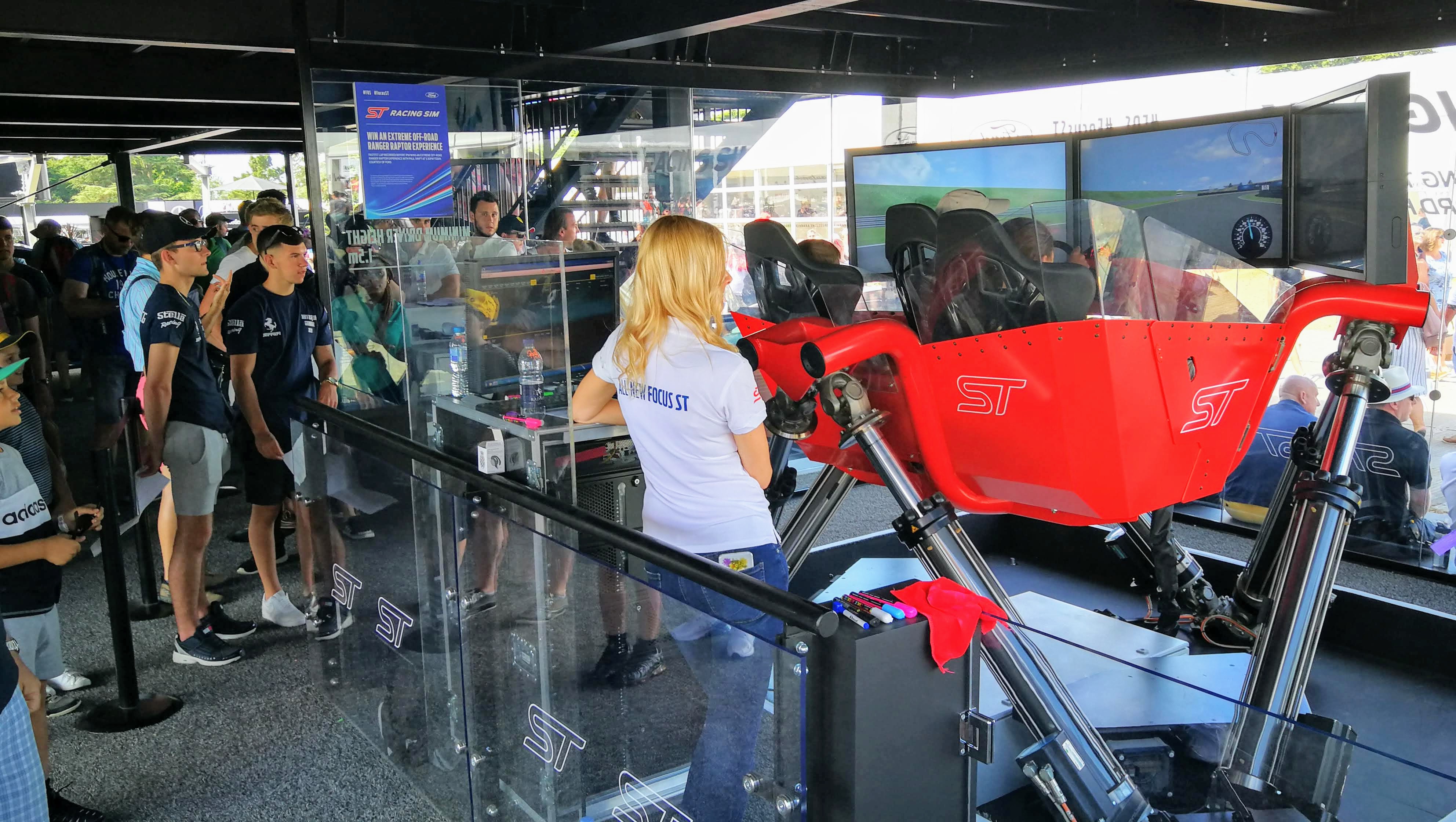 Entertainment included a Focus ST simulator with three-seats (the driver plus two passengers) and mounted on active gas struts, as well as a badge-making area, a three-rig Forza game-based Ranger Raptor challenge, roof-top lounge areas and even a toboggan run — called the ST Test Track — that wound its way around the outside of the stand. 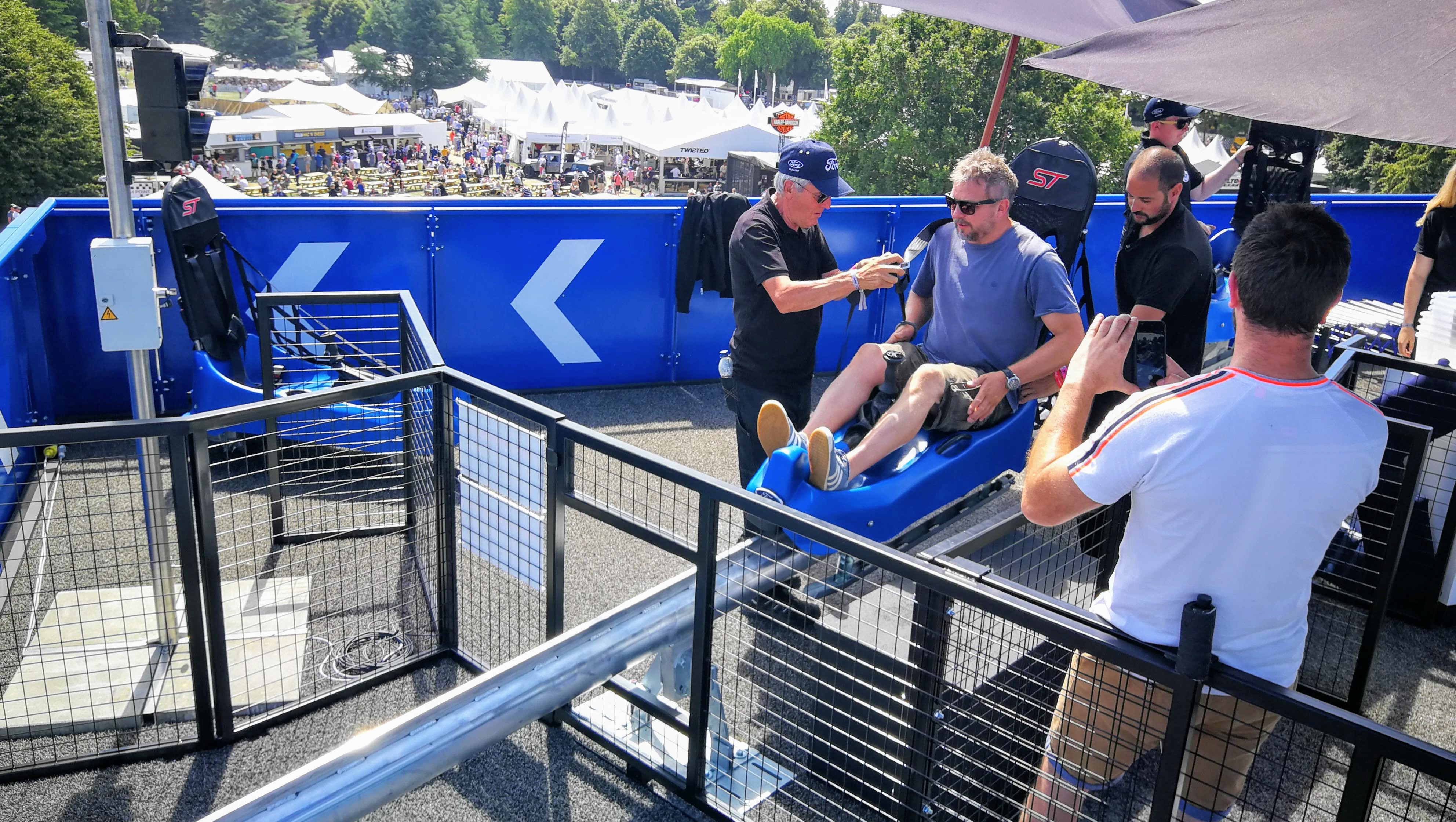 Ford told us that almost 2,800 rode the ST Test Track, there were more than 15,000 “customer interactions”, which included playing the games, making the badges and inquiring about vehicles, and an estimated two to three times that amount of people who visited the stand over the weekend. 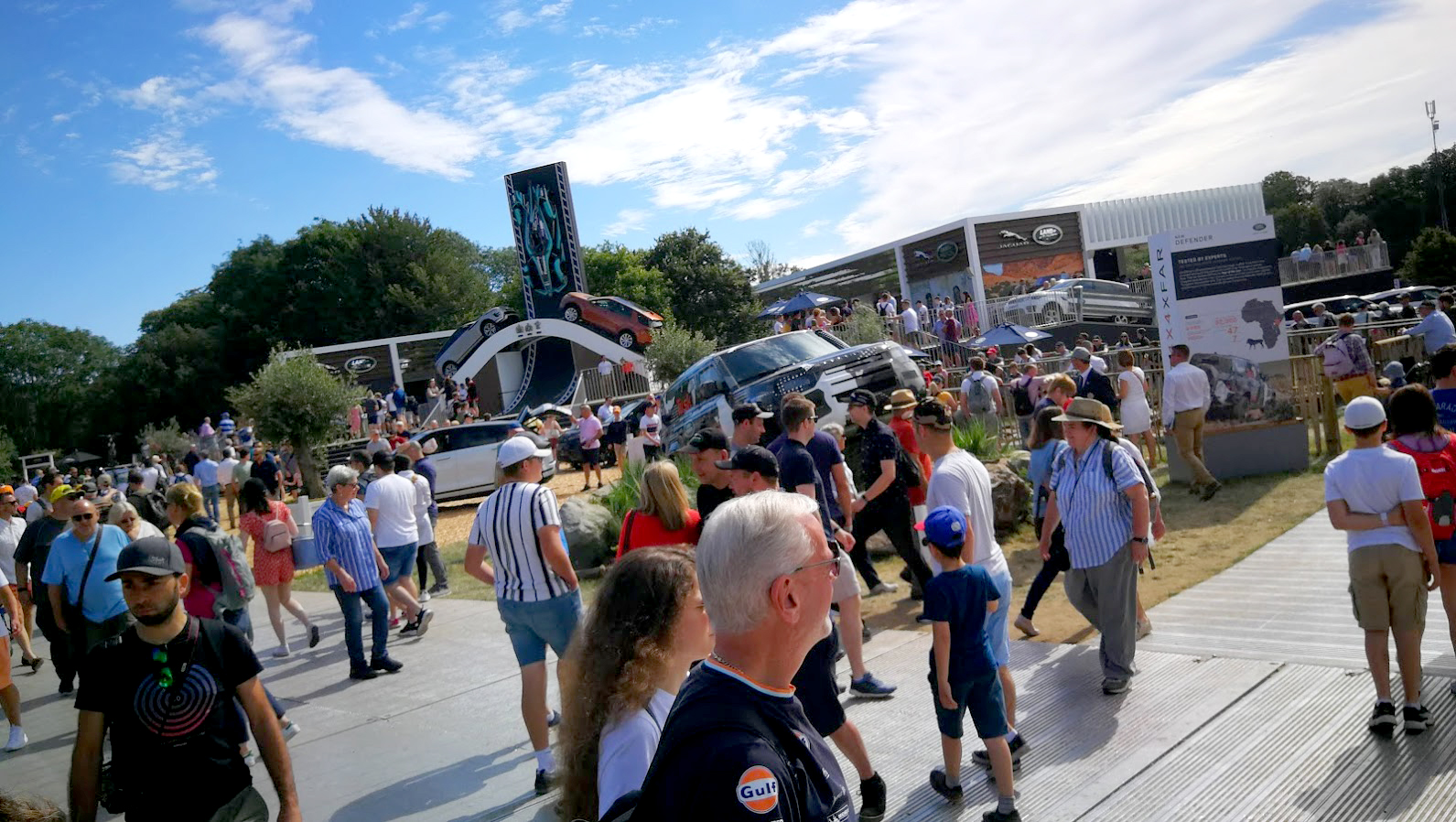 As you can tell, it wasn’t easy to capture the entire Jaguar Land Rover stand on camera, due to its sprawling nature. It was massive, covering 10,650sqm (including experience areas), and took a total of 50 people a full month to construct and was 100 people worked on the stand over the course of the weekend, according to JLR.

The main attraction had to be the camouflaged version of the new Defender, on public display for the first time, but JLR went out of its way on the experiential side of things. 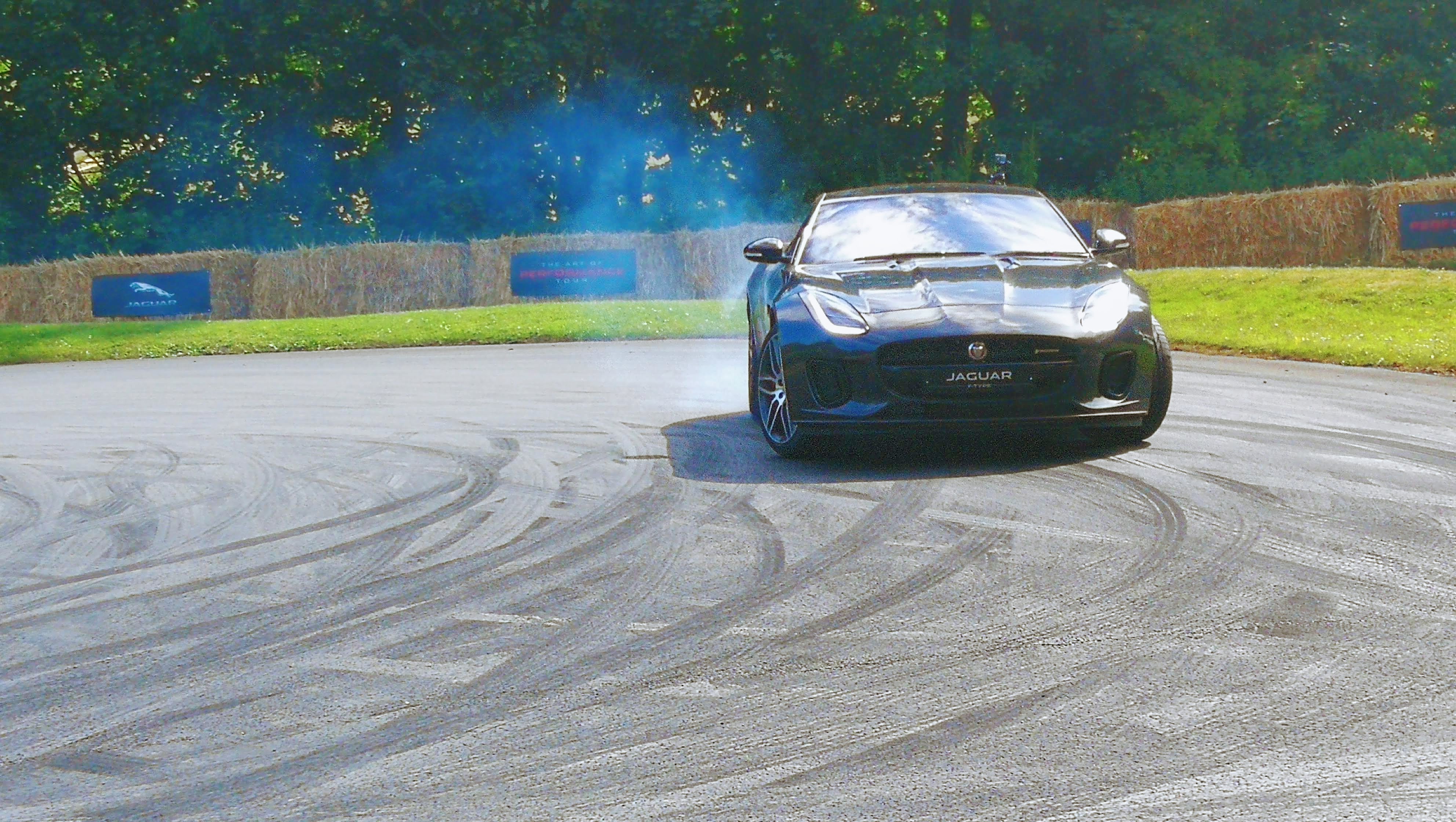 Visitors were able to get tyre-shredding passenger rides in Jaguar F-types on the drift track, which was so popular people were prepared to queue for up to a couple of hours. That was despite there being seven cars, each with their own driver, and vehicles going straight out as soon as another came back in. 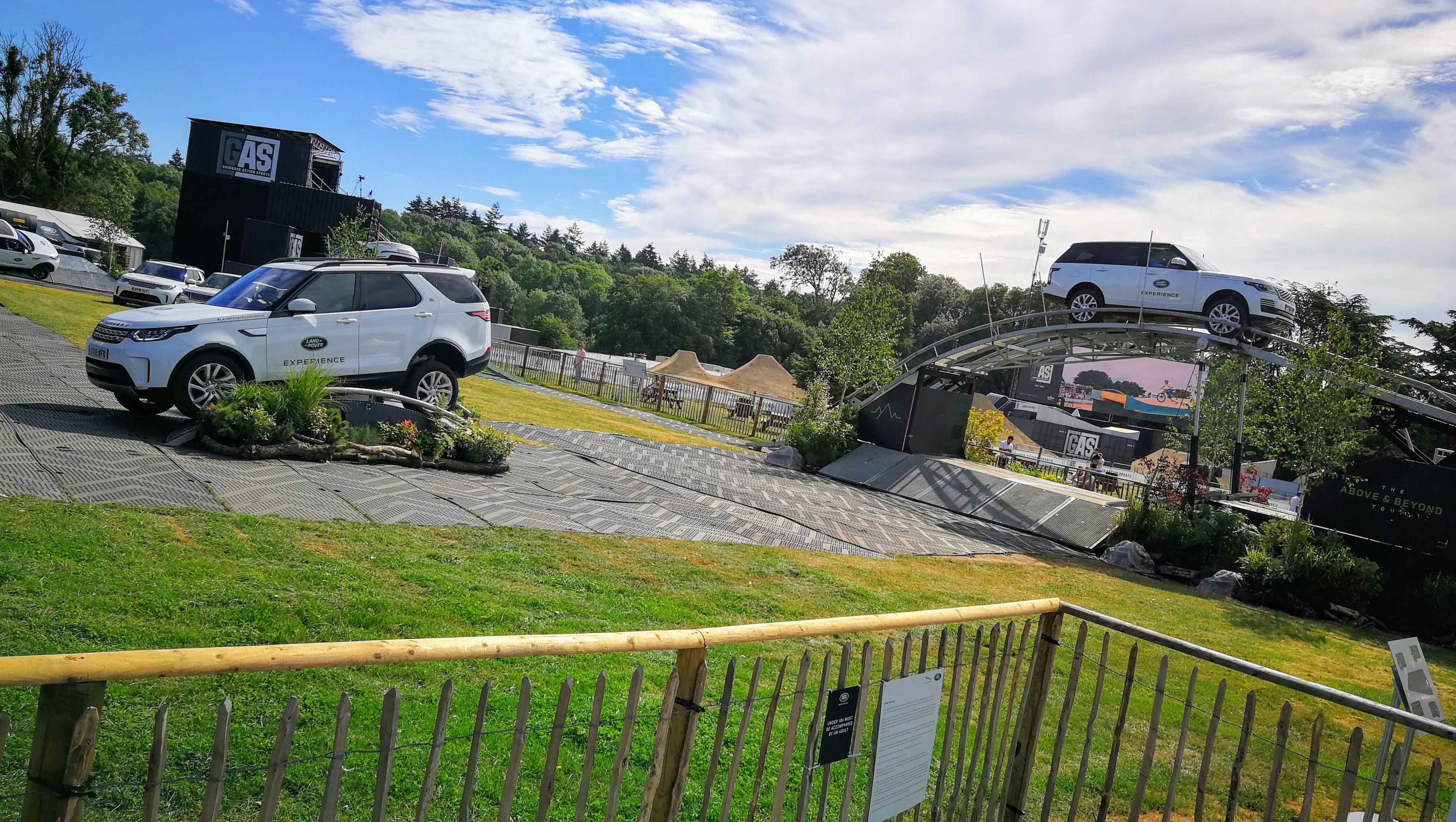 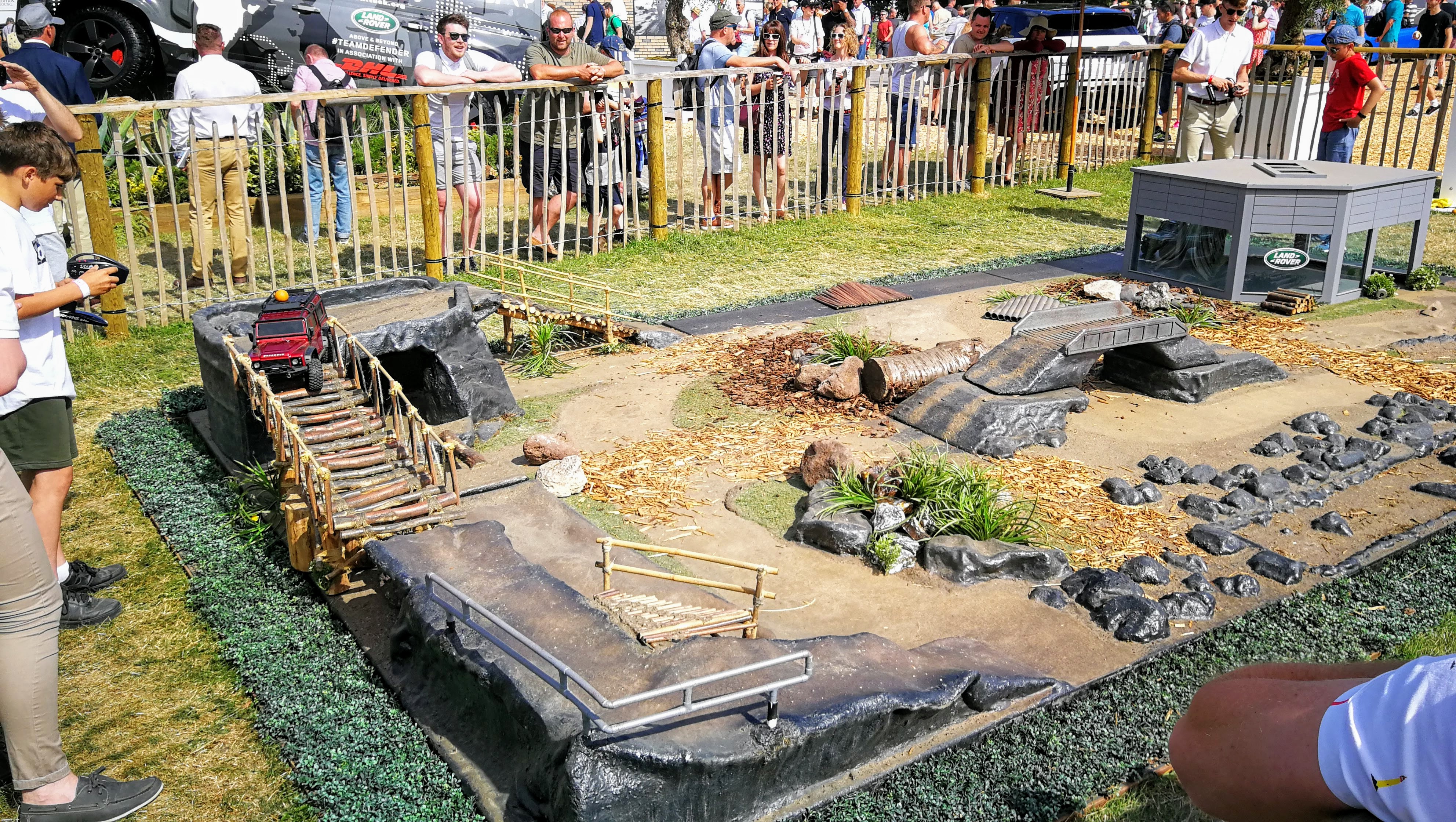 Children were catered for with remote control tracks for both brands; the Land Rover one was especially cool. 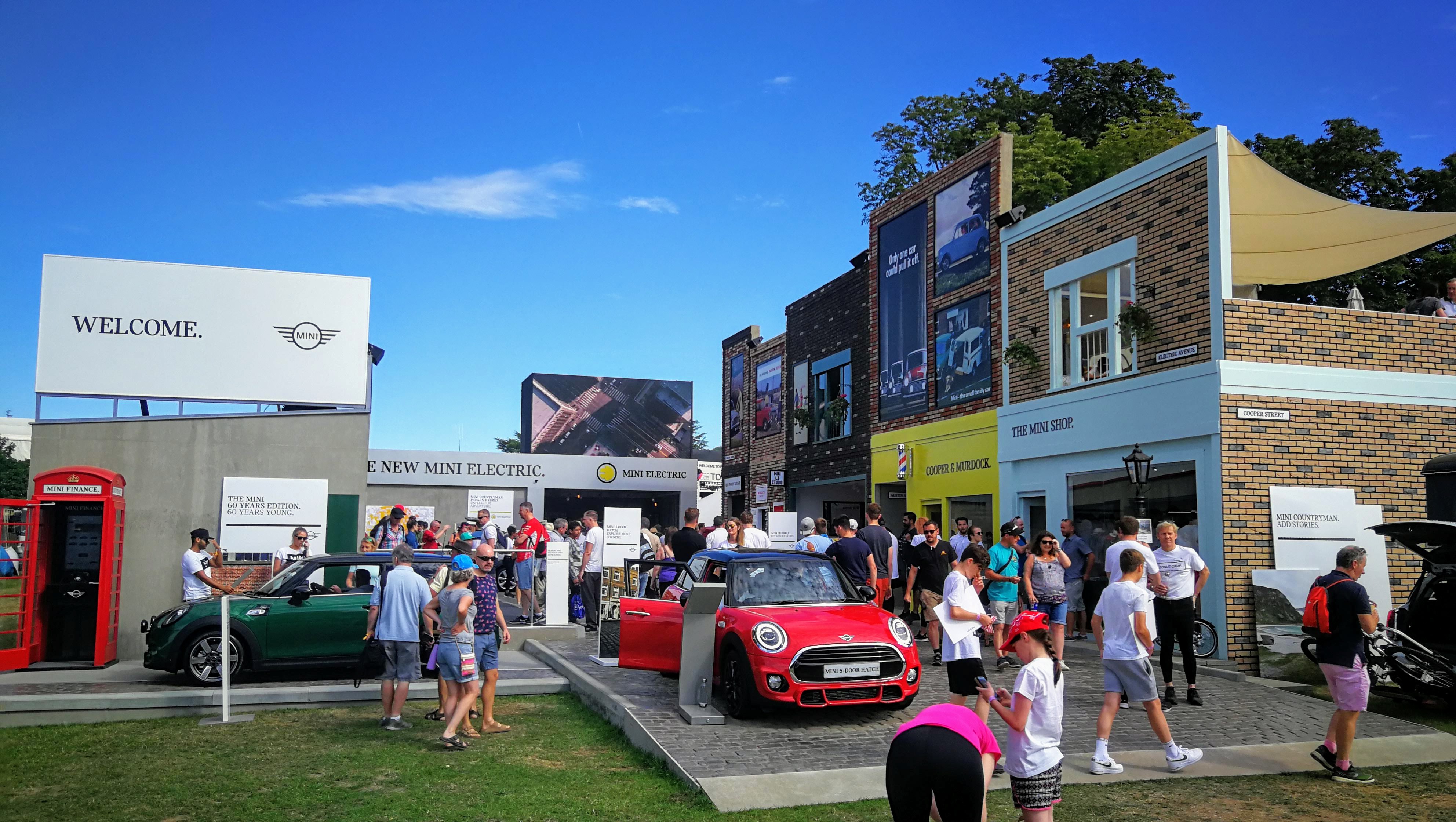 MINI has always been associated with fun and leftfield thinking, and with its brilliant stand at Goodwood the brand really captured that spirit. Funky music pumped into the town-like layout created a real street party vibe. 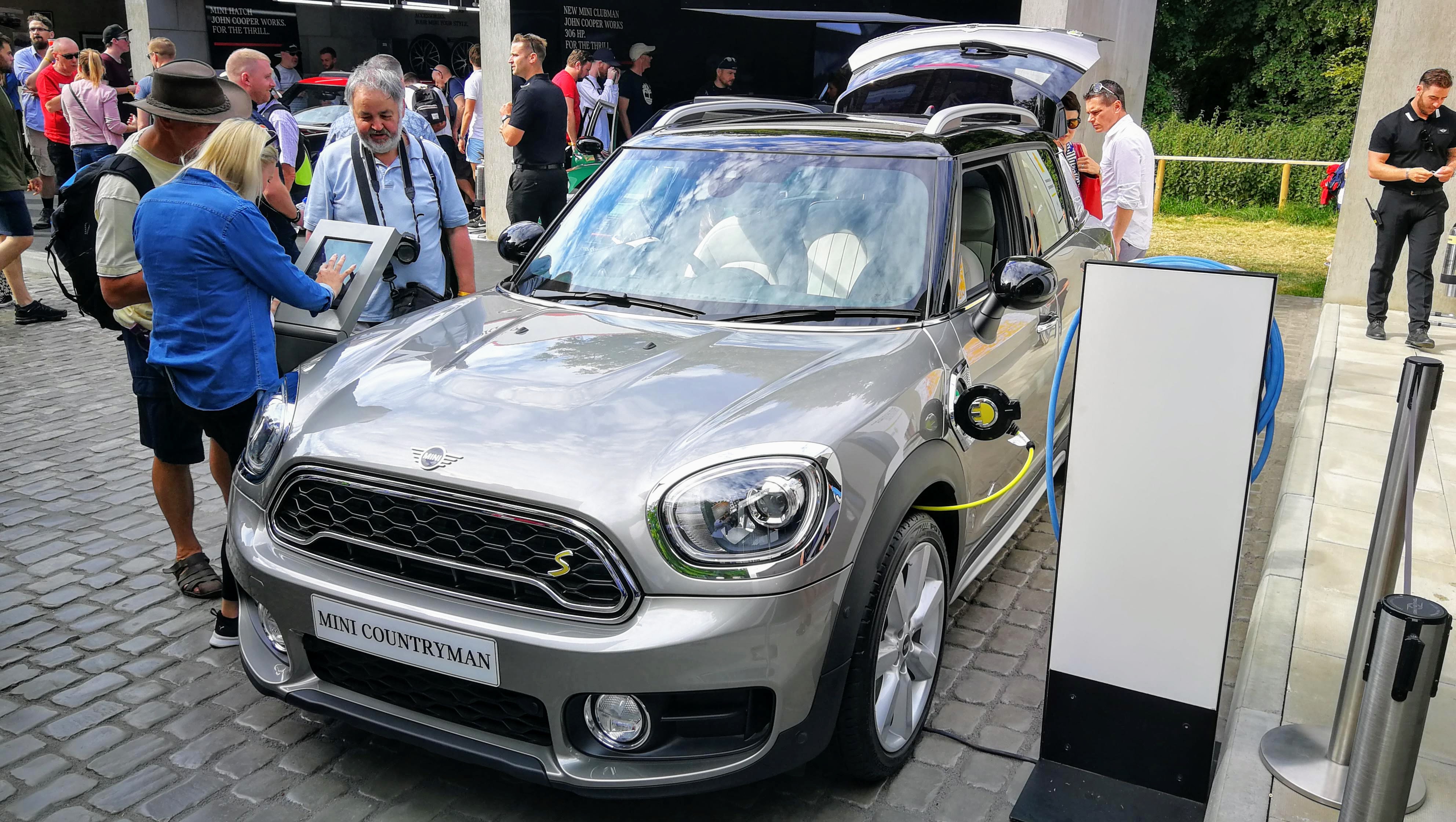 The stand included a mix of the modern and classic (something the modern MINI brand has in the past failed to embrace wholeheartedly). Joining the latest Hatch, Clubman and Countryman models (including a plug-in hybrid version) were the original Austin Mini and Mini Copper rally cars within 1950s and 60s-themed shop fronts. 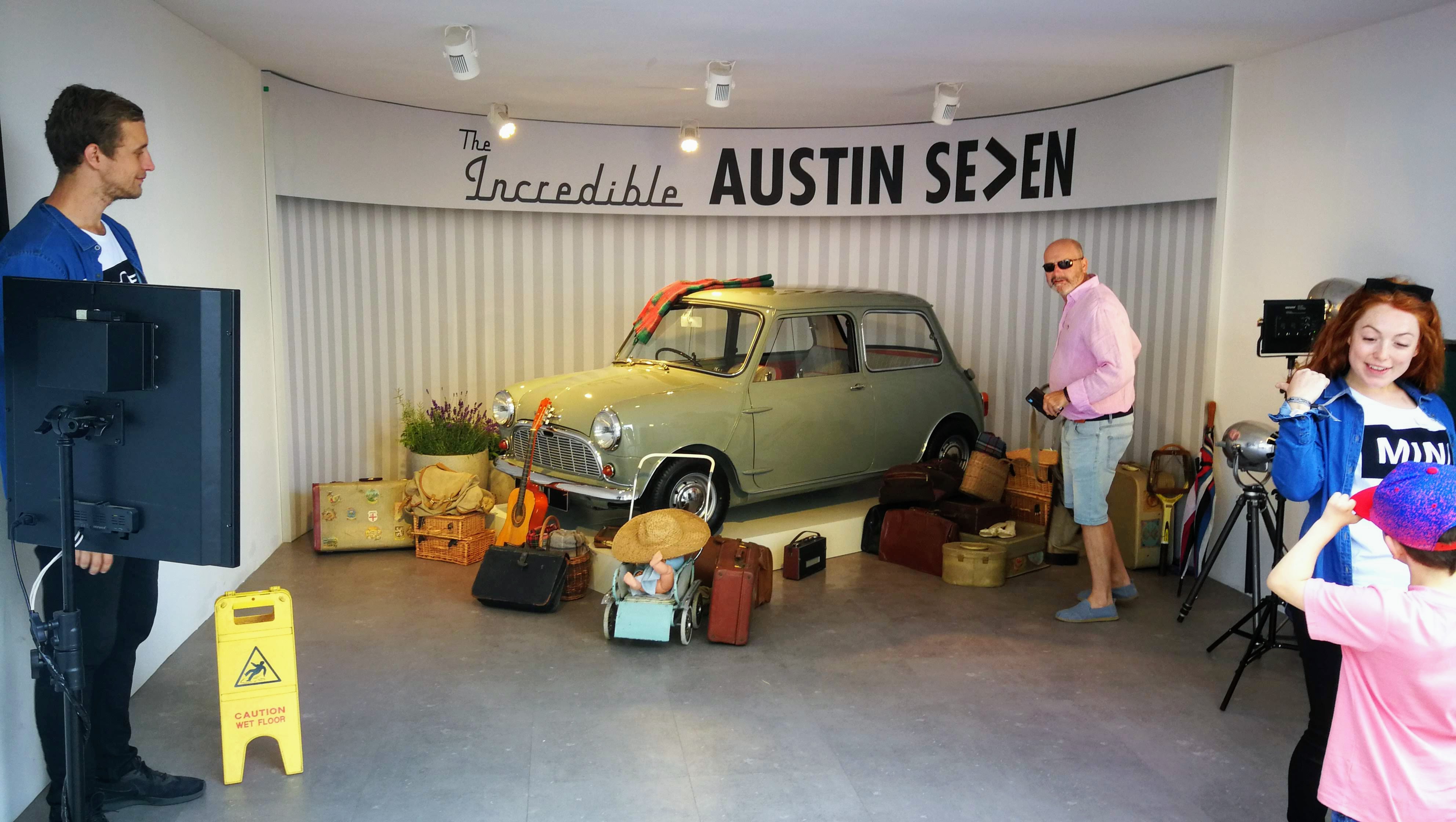 The highlights were the photo studio done up just like the original Mini’s famous press shot, and the Monte Carlo-spec John Cooper Works Garage. John Cooper’s son and grandson were on the stand while we visited, in fact, and their trendy electric bicycle was mounted to one of the walls. 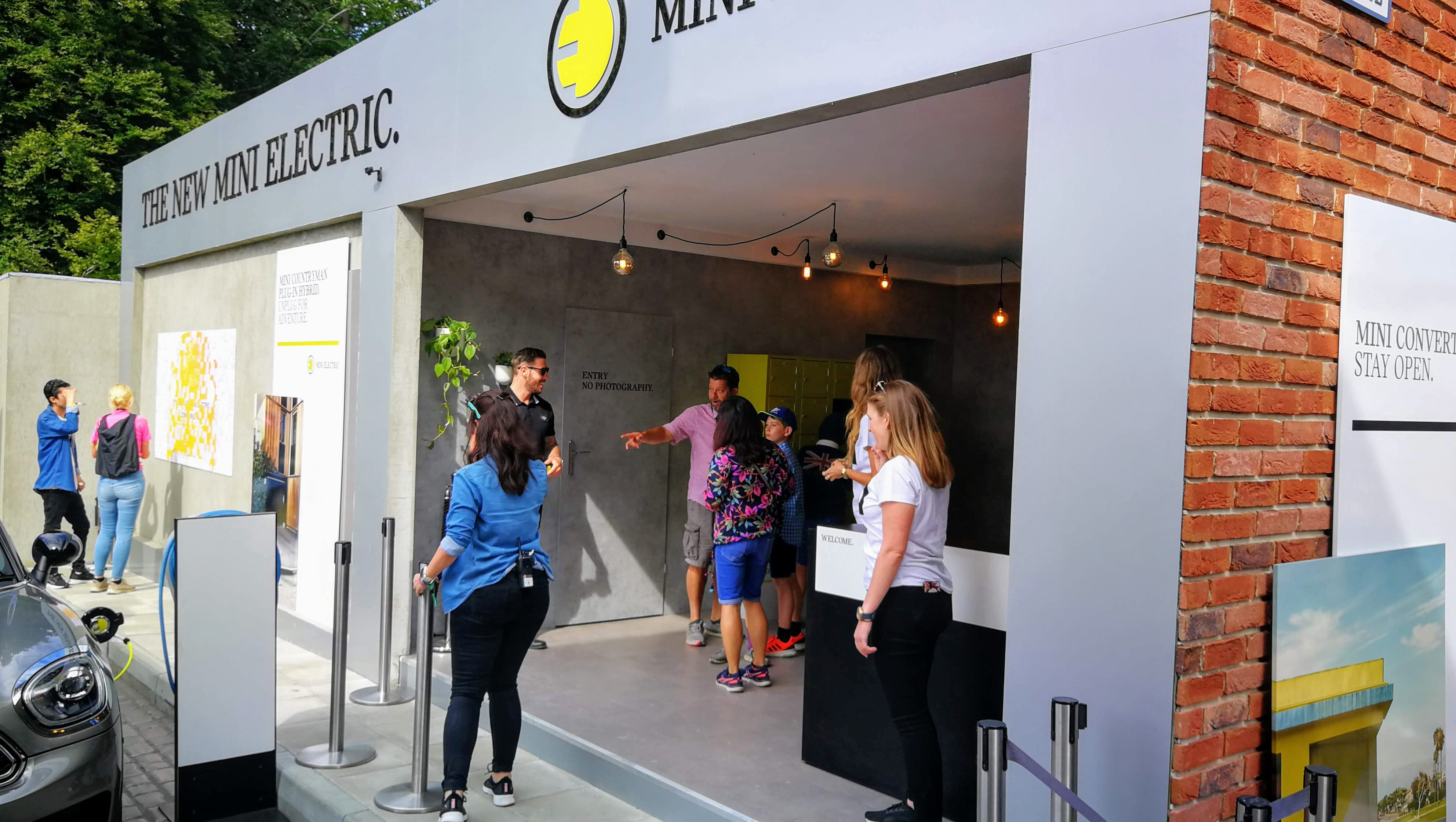 Bringing things bang up to date, at the far end of the street was an opportunity to view the new MINI Electric. Final images hadn’t even been released to media outlets so security was tight — all visitors were asked to lock phones and other camera equipment in lockers before entering the private room.