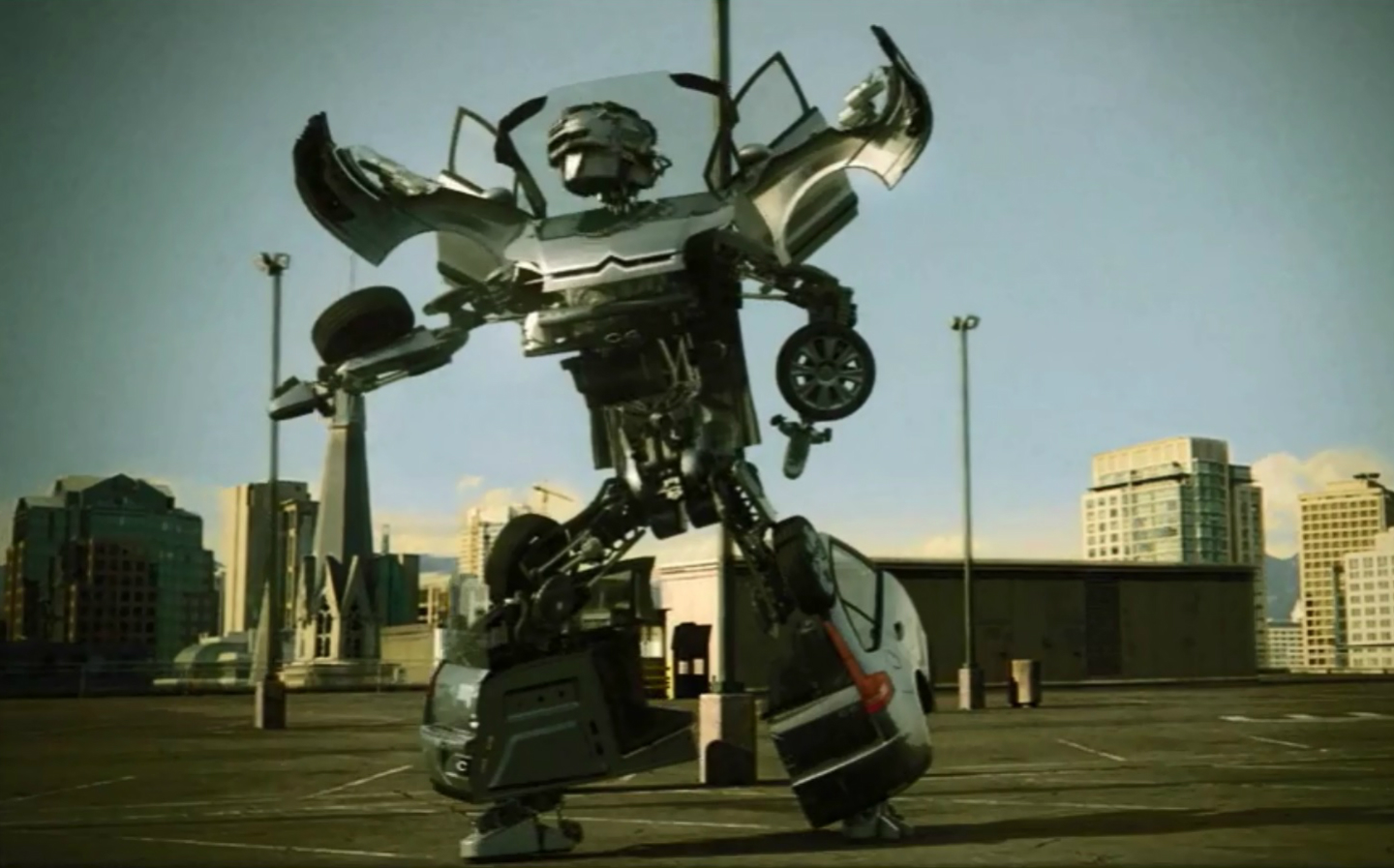 EVER SINCE Citroën opened its doors as Europe’s first mass-market car maker in 1919, the French firm has had a big impact on the motor industry. Legendary models such as the 2CV have rolled off its production lines, and many innovations we take for granted today (including rain-sensing windscreen wipers, disc brakes and speed-sensitive power steering) first appeared on production cars from Citroën.

Citroën can also lay claim to innovation when it comes to car marketing. According to new book 100 Years of Citroën Advertising by Jacques Séguéla, co-founder of the French advertising agency RSCG and a man who once circumnavigated the world in a Citroën 2CV, the car maker also introduced now-standard advertising techniques such as the pre-model launch promotional campaign.

Séguéla also recognises Citroën as a pioneer of lavish PR stunts — most notably, perhaps, sending a convoy of its cars fitted with bespoke rear caterpillar tracks on an epic 2,000 mile drive across the Sahara Desert in 1922 — a world first.

Here are a handful of our favourite adverts made by the French car maker to date, as featured in the book. 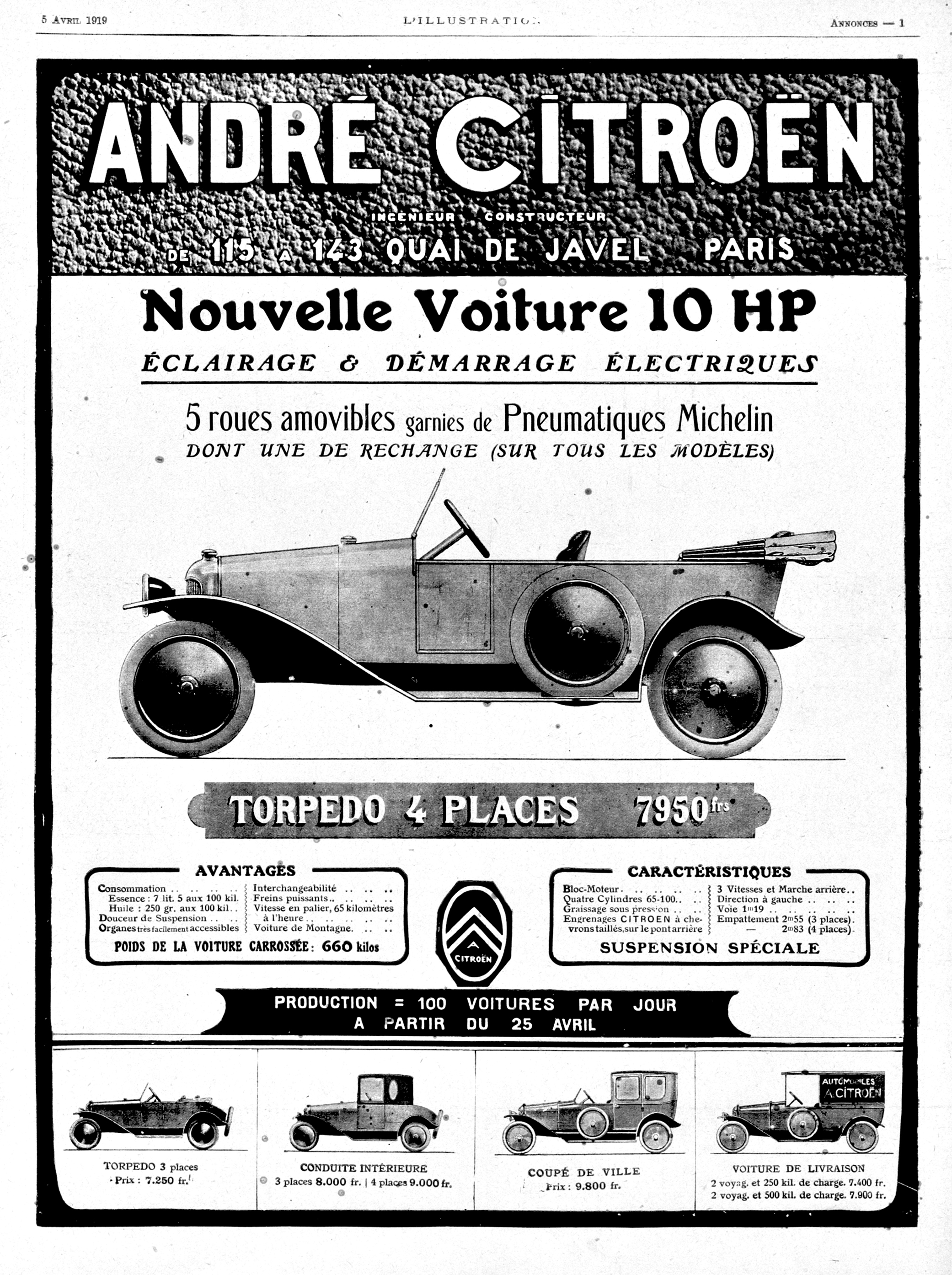 While Citroën wouldn’t start building cars until the summer of 1919, the company promoted its cars beforehand. Mere months after the guns fell silent on the Western Front, the French firm was advertising its first model, the Type A, highlighting all the Edwardian gadgets people could look forward to if they had at least 7,250 francs burning a hole in their portefeuille.

Séguéla quotes one “collaborator” as saying, “they were selling no more than a barely-tested prototype. We didn’t yet have the means to produce it.” Ballsy. Fortunately buyers lined up for the Type A and the thousands of deposits laid the foundations for the next 100 years.

What do the Double Chevrons stand for? 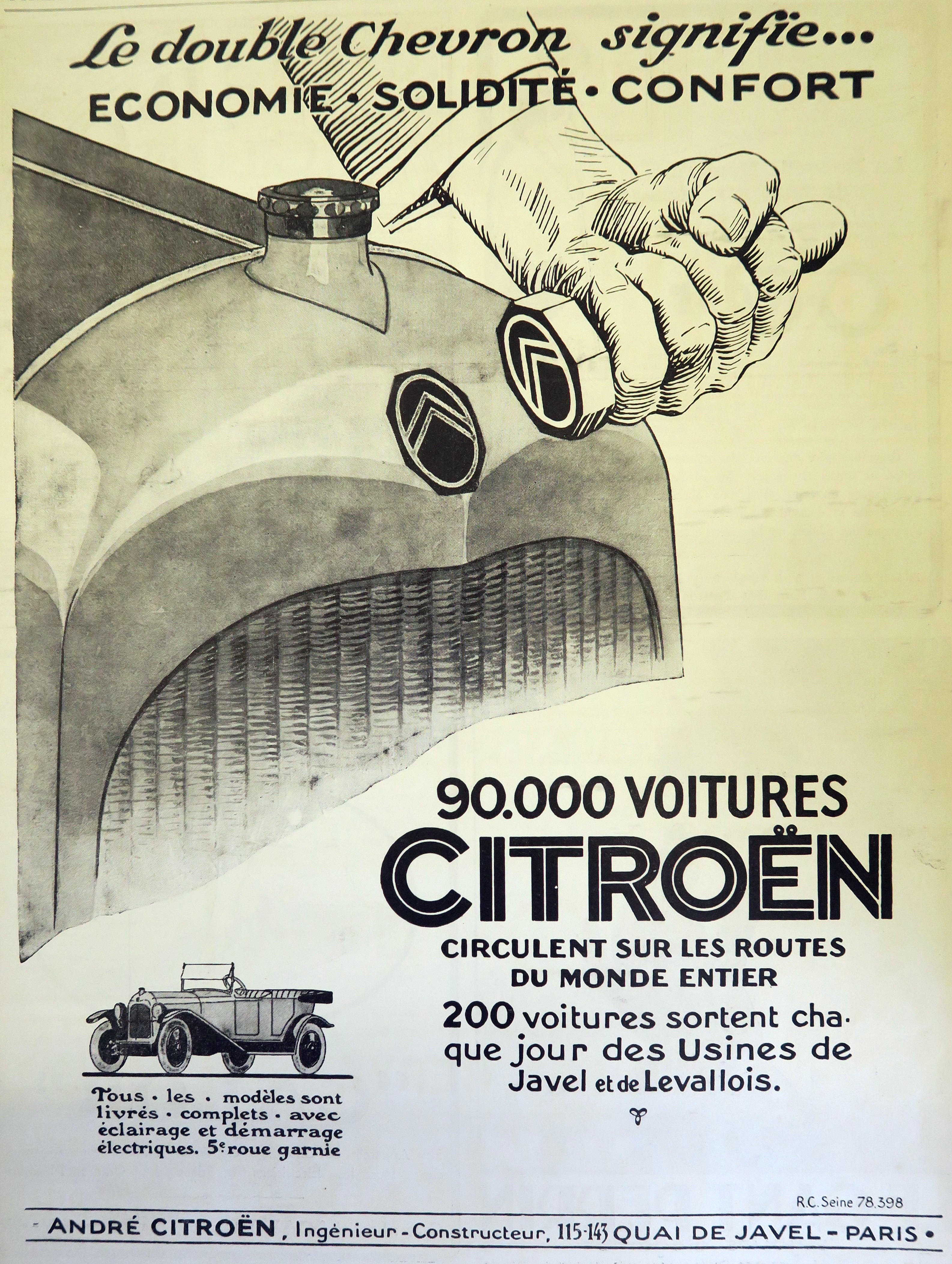 Citroën’s logo may be one of the most recognisable in motoring but, as that early 1919 magazine advert shows, the company very rarely placed much emphasis on the badge in its early marketing material. That began to change as the company sold more and more cars, however, with the above advert explaining just what the emblem represented: “Economy. Solidity. Comfort.” 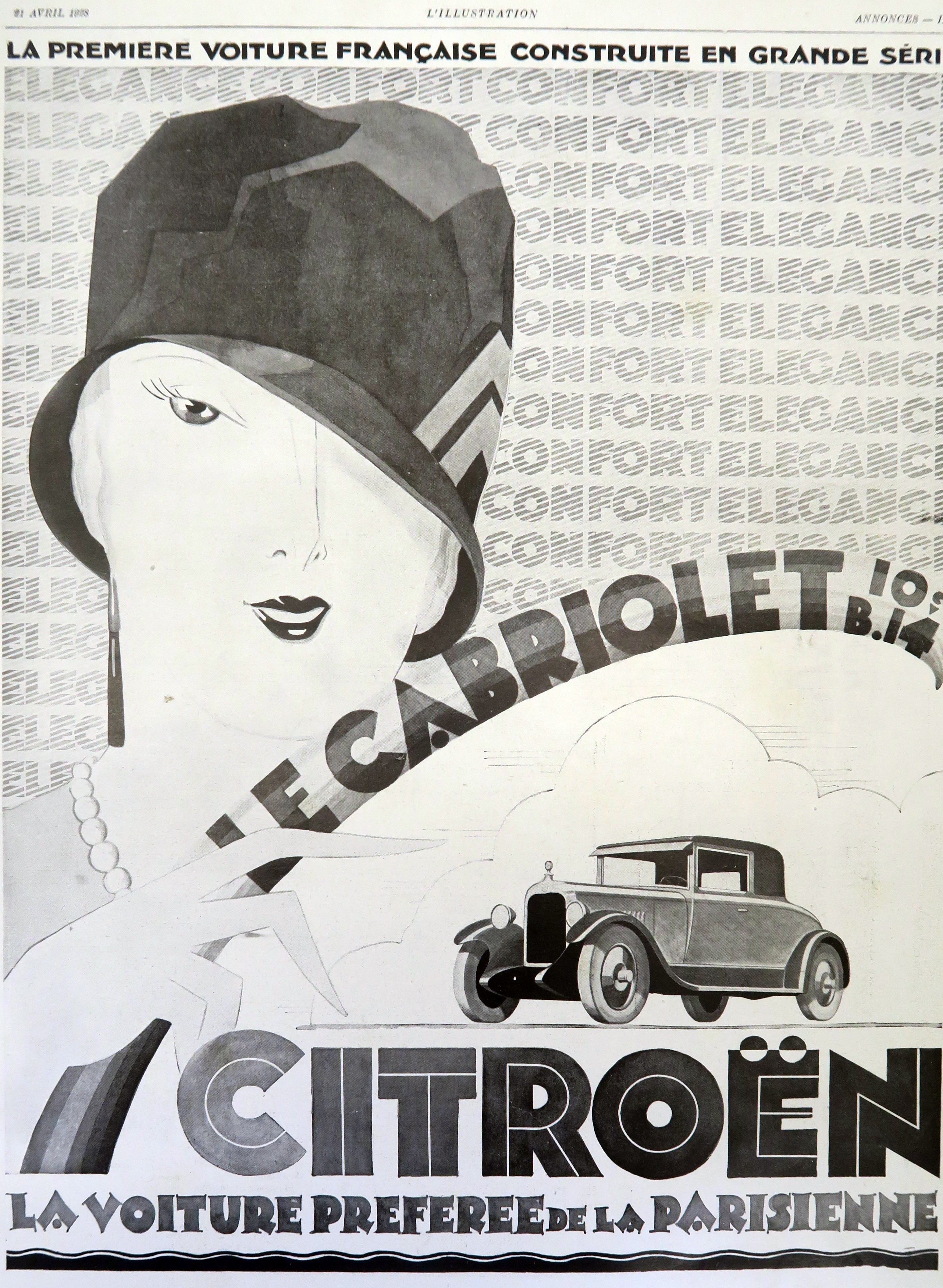 Car companies were promoting their wares to women long before Citroën began building its own models, but the French firm was one of the earliest to directly target female drivers in its advertising. By the standards of their time, the marketing material was quite forward thinking (when the above poster was printed, women in France didn’t have the right to vote and couldn’t get a job without their husband’s consent), though the emphasis on ease of use, comfort and elegance might be considered a bit on the nose today. 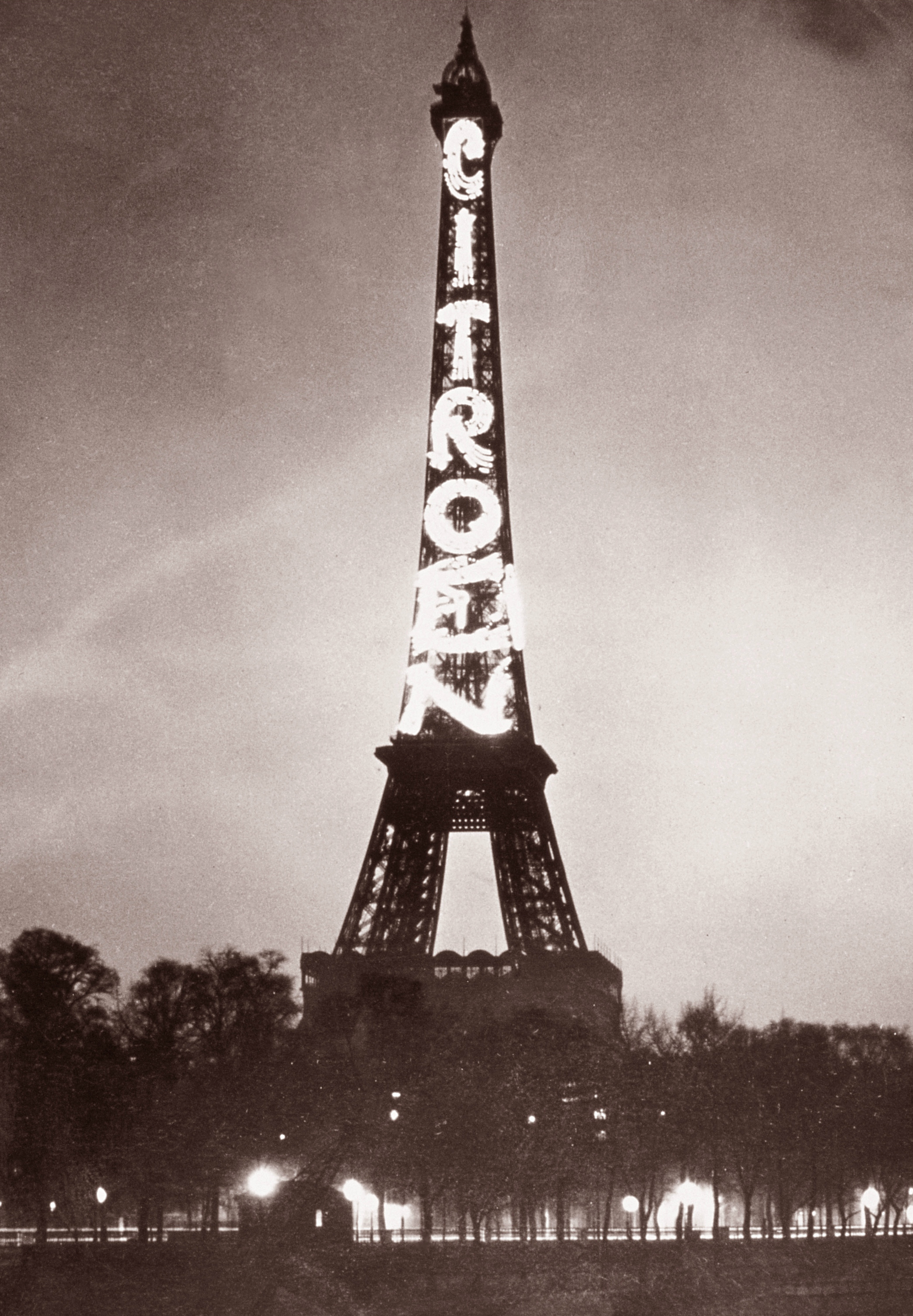 Of the many promotional pieces devised by Citroën over the last 100 years, few can match the famous feat of turning the Eiffel Tower into a giant billboard for the car maker. Making the accomplishment even more impressive was that it wasn’t a short-lived PR campaign: the array of 250,000 bulbs lit up the Citroën name in the Parisian skyline night in, night out from 1925 to 1934 (reportedly costing the car maker 350,000 francs per year). 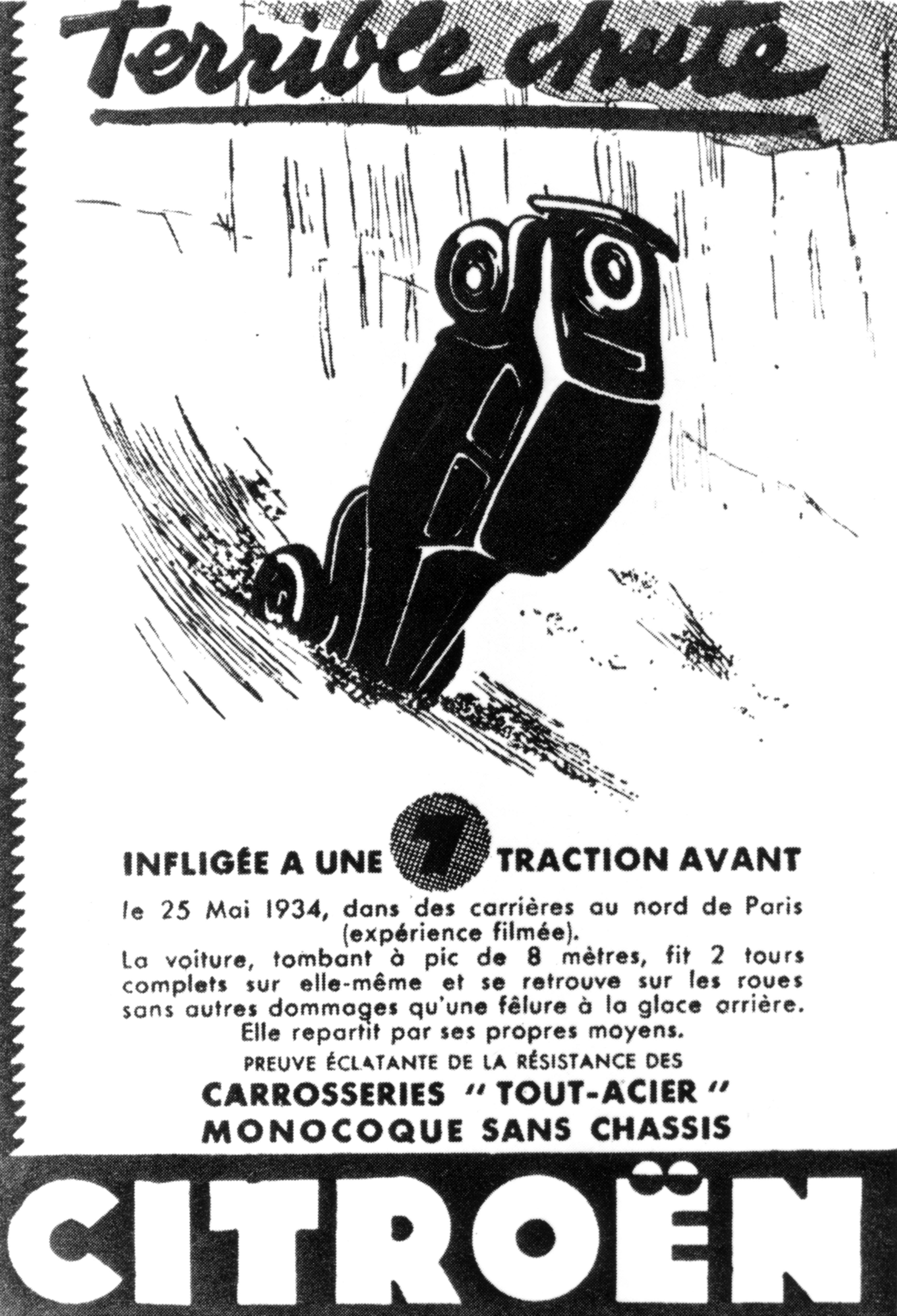 While almost every car on sale today has a one-piece bodyframe, the Citroën Traction Avant’s monocoque chassis was incredibly unusual for its time. To show buyers in 1934 they had nothing to worry about when it came to safety, Citroën demonstrated the Avant’s structural strength in an early attempt at a crash test; even filming the demonstration to show it wasn’t faked. The trial was a far cry from today’s Euro NCAP assessments, though — it simply involved Citroën pushing a Traction Avant off a cliff.

The Citroën DS was one of the most advanced passenger cars of its era, and its makers wanted as many people as possible to know and appreciate that. Throughout the car’s 20-year production run, Citroën indulged in an array of short films celebrating the DS’s technical accomplishments, with one of our favourites being a black-and-white flick focused entirely on the car’s headlights that swivelled with the steering wheel — a feature only now becoming commonplace on high-specification cars.

Until the 1980s, almost all of Citroën’s adverts had emphasised the car rather than the company. That changed in 1984 with the launch of the “Les Chevrons Sauvages” commercial, which culminated in 100 or so horses galloping in tandem in the shape of the car maker’s double chevron logo. It clearly struck a chord with French film producers: Les Chevrons Sauvages is the only advert to date to win a César academy award.

The “you’re crazy” slogan for the Citroën Visa GTi’s 1985 advert was definitely appropriate: in the short TV spot, the pocket-sized hot hatch races against a fighter jet on the deck of an aircraft carrier, launches into the sea, and ascends from the depths on the deck of a submarine.

According to Séguéla, who masterminded this particular advert, the use of in-service military vessels required the seal of approval from Francois Mitterand, then president of France. The answer to Séguéla’s request was, “Alright, why not?”

Considering the commercial is so well executed, it’s no surprise some serious talent was involved: the project was helmed by Oscar-winning director Neill Blomkamp, and motion capture tech allowed the droid’s dance moves to be performed by Justin Timberlake’s choreographer, Marty Kudelka. The song Jacques Your Body (Make Me Sweat) by Les Rythmes Digitales surely played an important part in its success, too.

Looking back to go forward

Some of Citroën’s earliest big PR stunts were epic cross-country expeditions, and last year’s “Forward” short film-style commercial (which are becoming more common in the online advertising space) saw the car maker rekindle its adventurous past. More impressively, none of what was shown in the advert was faked: the driver genuinely reconfigured the C3 Aircross in situ into a bridge layer, and really did make the crossing over the river.

As well as being an epic feat, the exploit was also a tribute to the adventures of Emile Leray, who in 1993 re-engineered his Citroën 2CV into a rudimentary motorbike while crossing the Moroccan desert.