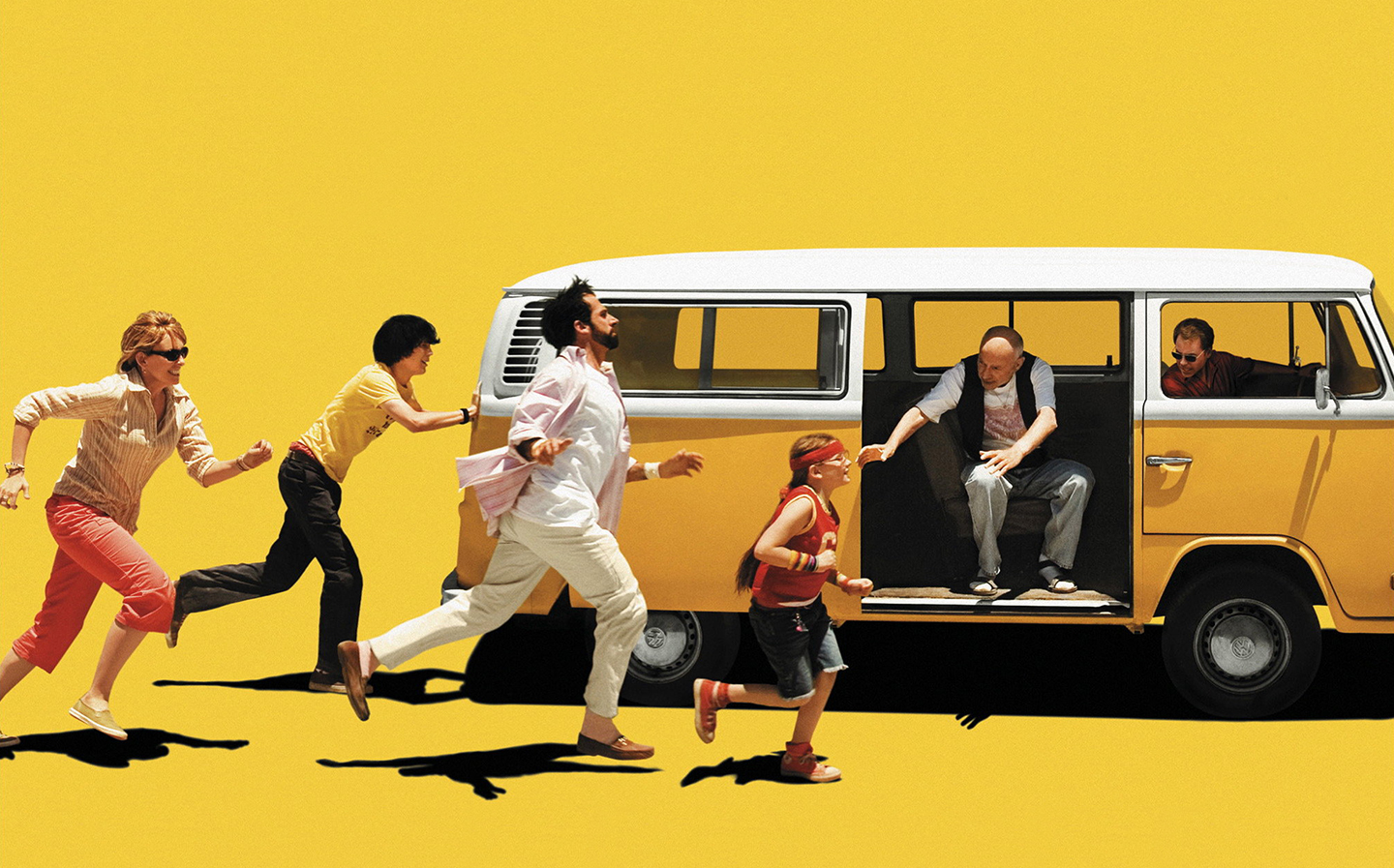 THE SUN is shining, the weather is sweet and the asphalt is calling: road trip season is here.

It’s a mood captured countless times on the big screen over the years, with road trips used as a powerful device for narrative progression. Families confined within a space for hours on end, surprise encounters and the inherent jeopardy of travelling at speed in a metal box have all played a role in some of the most memorable movies of all time.

The selection of films we’ve gathered below are not just highly regarded by critics but also feature some epic drives with gorgeous backdrops ranging from the American Mid-West to the Australian Outback.

Stunning vistas aren’t the most essential element for a true great road trip flick, though, and to prove it look no further than Tom Hardy vehicle (see what we did there?) Locke, which involves a journey along British motorways from Birmingham to London.

So strap in and fire up the streaming service: here in no particular order are our 10 best road trip movies to watch, whether you’re hitting the two lane black top yourself or not.

Have we missed your favourite? Tell us what it is and why you love it in the comments.

Long drives with the entire family in tow never tend to go smoothly, and that’s certainly the case of Little Miss Sunshine. In their 800-mile drive across the United States, the Hoovers contend not only with their Volkswagen camper van breaking down but also the antics of their dysfunctional relatives — not least the grandfather played by Alan Arkin, who deservedly won a Best Supporting Actor Oscar for the role .

Did you know? Little Miss Sunshine’s screenplay writer Michael Arndt based the issues affecting the Volkswagen on the unreliability of a camper van from a real life childhood road trip of his own.

On paper, a film that’s predominantly set on British motorways and has its sole on-screen actor (Tom Hardy as the movie’s titular character, Ivan Locke) behind the wheel of an unremarkable BMW X5 SUV does seem that gripping. However, the daring drama is far more than the sum of its parts, with The Times saying director Steven Knight has created in Locke “a bold, genuinely thrilling piece of cinema out of seemingly meagre ingredients”.

Did you know? The phone call dialogue you hear in Locke wasn’t added in post-production; it was filmed in real-time, with the off-screen actors calling and speaking to Hardy while the cameras were rolling.

Action comedy Midnight Run involves a bounty hunter tracking down a Mafia money-embezzling accountant then escorting him from New York to Los Angeles, one of the longest journeys of any road trip movie. As the trailer shows, the epic voyage doesn’t exclusively use cars, though there is plenty of highway-based drama and Midnight Run is rightly considered one of the greatest road trip movies of all time, thanks to hugely entertaining characters and fine chemistry between Robert de Niro and Charles Grodin in the main roles.

It may not be car-based but there is road and there is plenty of trip. Easy Rider, according to the trailer, is “the story of a man who went looking for America and couldn’t find it … anywhere”, though of course there’s more to it than that. It’s worth watching for the performances alone, with the cool Peter Fonda joined by two of the most unsettling screen presences of all time: Dennis Hopper and Jack Nicholson.

The bikes are pretty cool pieces of kit, too: Harley-Davidson-based choppers sporting lashings of glinting chrome and good’ol paint jobs on the tanks.

Did you know? Only one bike from Easy Rider — the “Captain America” — is known to have survived. The other choppers were stolen before filming ended and haven’t been seen since.

If you’re after lighthearted road trip movie fun, you can’t go too far wrong with National Lampoon’s Vacation, an outlandish comedy about the Griwsold family’s topsy-turvy travels across America to a theme park in sunny California. While the hurdles encountered by Clark and co. along the way are outlandish, in true Staurday Night Live style, many of the trials of a family road trip will strike a chord with parents.

Because the Buick Roadmaster is such an icon of classic Americana, Rain Man automatically gets the thumbs up from us here at Driving.co.uk. There’s far more to like about the movie than the pastel yellow convertible, though, not least the film’s leading duo: Tom Cruise and Dustin Hoffman. The screen legends spearhead an engrossing tale about two estranged brothers — one of whom is initially motivated by money, the other an autistic savant — on an introspective journey across the United States.

Did you know? The owner of the Buick Roadmaster used in Rain Man is the film’s director, Barry Levinson.

Australia’s car-based feature film catalogue isn’t limited to the Mad Max movies: in 2000, director Clara Law brought to the world her distinctive road trip movie, The Goddess of 1967. Like the film’s distinctive French car, the film stands out from the crowd. The plot sees a Japanese businessman and a blind woman travel across the Outback in a Citroën DS (“Déesse” in French, meaning “Goddess”). It’s a fascinating work, though as the excerpt above suggests, Law’s dreamy style may not be for all tastes.

Did you know? The Goddess of 1967 isn’t the first film about a Japanese man who goes abroad and buys a Citroën DS. The 1996 Icelandic indie flick Cold Fever had a similar premise, albeit with a considerably different narrative.

We’ve already seen with Locke and Midnight Run a great road trip film can emerge from the most unlikely of premises, and David Lynch’s 1999 road drama The Straight Story is another great example of this. Lynch is known for his disturbing, surrealist films and TV shows, such as Eraserhead and Twin Peaks, but as the name suggests Straight Story is a simple, conventionally told tale of an elderly man desperate to reach his infirm brother. The oddest thing about the film is the choice of transport: a John Deere ride-on lawnmower, which is used to travel at a snail’s pace across the American Mid-West. With Straight Story, Lynch proves he’s a master of grabbing attention and tugging at heartstrings, regardless of chosen style.

Did you know? As crazy as it sounds, The Straight Story is based on a true story. In 1996, the real life Alvin Straight really did drive his ride-on mower for 240 mile trip to visit his unwell brother.

Few road trip films have had as much of an impact on pop culture as Ridley Scott’s 1991 hit Thelma and Louise; not least through its iconic end sequence (which we shan’t spoil here, in case you haven’t seen it yet). The #MeToo movement that’s swept through Hollywood has meant the film still resonates poignantly nearly three decades after its original release — though, as Thelma and Louise star Geena Davis told The Times, there’s still a long way to go before the movie industry is no longer a predominantly man’s world.

Did you know? Thelma and Louise isn’t the only famous film to feature a fourth-generation Ford Thunderbird convertible: a yellow example also appeared in the 1964 James Bond movie Goldfinger.

As this list suggests, road trip movies that cut through in America and the UK are most often set in the United States, though director Alfonso Cuarón helped buck that trend in impressive style with his Mexico-based road film, Y Tu Mamá También (“And Your Mother Too”).  The coming-of-age story involves two teenage friends on a five-day trip to a beach they’ve made up, inviting an alluring older woman along for the ride. Rolling Stone magazine called the multi-award winner a “hot-blooded, haunting and wildly erotic film [that] revels in the pleasures of the flesh without losing touch with thought and feeling.”

Did you know? Alfonso Cuarón isn’t a household name in the UK but you’re almost certainly familiar with his work. The Mexican film maker’s credits include high-profile hits such as Gravity, Harry Potter and the Prisoner of Azkaban and last year’s Academy Awards darling Roma.