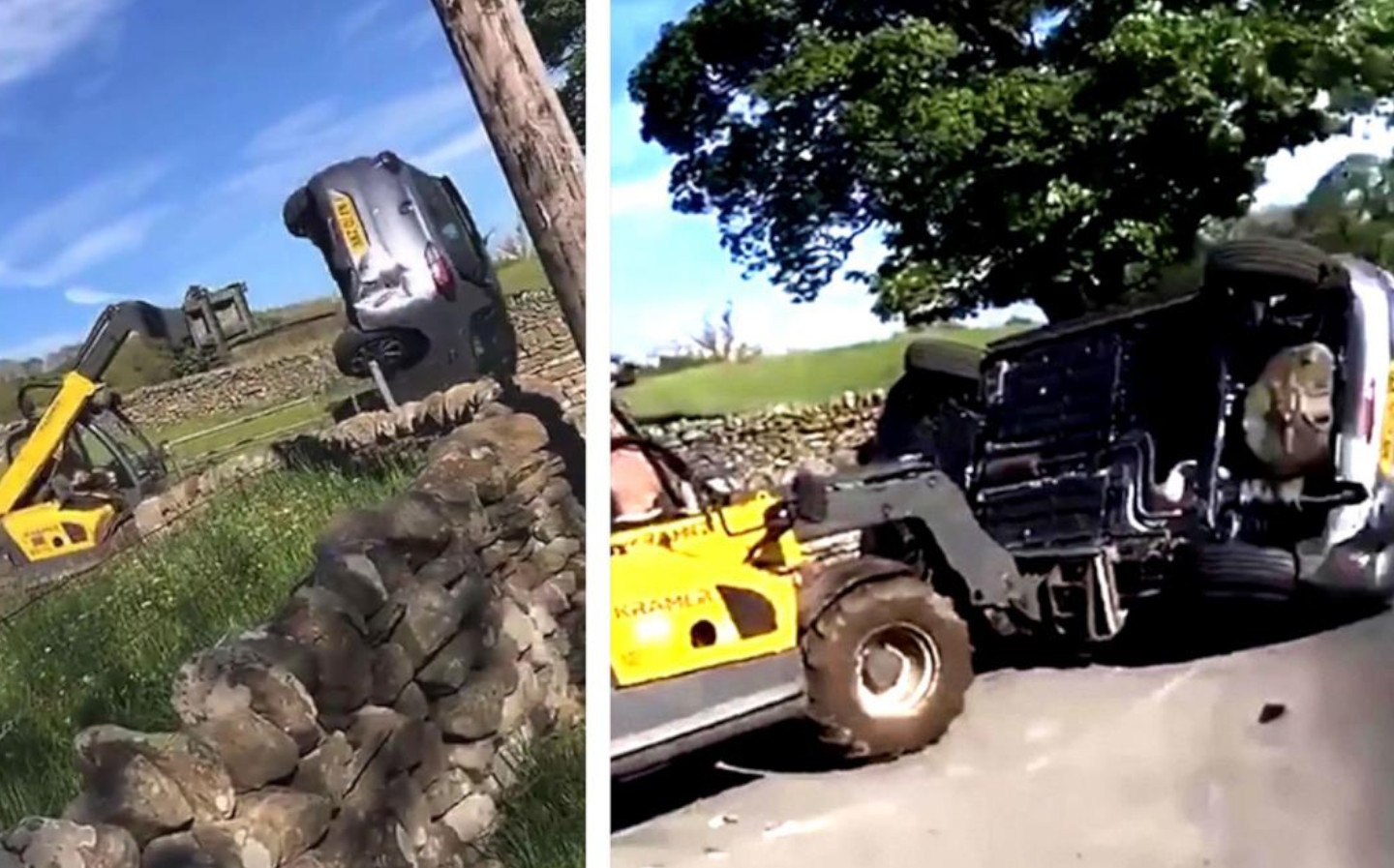 A TEESIDE farmer has been accused of using his equipment to destroy a Vauxhall that was blocking his driveway.

The incident is believed to have taken place last Saturday in Co. Durham, and was recorded and posted to Snapchat before being shared on other forms of social media.

The video shows a silver Vauxhall Corsa, which is understood to have been parked on private land, being picked up by a yellow Kramer telescopic handler (a machine that fellow farmer and Vauxhall critic Jeremy Clarkson has waxed lyrical about in his Sunday Times farming columns) and being thrown on its side.

The telehandler then pushes the upended car into the road, where it rolls onto its roof and leaves a trail of debris and broken glass in the farm’s driveway.

Throughout the process, a shirtless man — perhaps the driver of the Corsa — kicks at the farm equipment, and is knocked to the ground by the telehandler as it turns around in the road.

One of the snapchat videos was captioned with the joke: “Glad it was just me courtesy car”.

Durham Constabulary attended the scene at just after 5pm and confirmed that an investigation into the incident is ongoing, although no arrests have been made. Social media users alleged that the farmer in question resorted to upending the Corsa after being a long-term victim of anti-social behaviour.

One commenter on social media said: “A lot more to this story, he’s a friend of a colleague, he’s been driven mad by these lot, starting fires, pushing walls over just to name a few things. Not saying it’s right, but they pushed him to the end of his tether.”

Another told the Mail Online that the Farmer had asked a group of men to move their car off the driveway but that they “didn’t obey”.

“He had no choice but to take matters into his own hands”, the unnamed source said.

Viewers have been polarised over the incident. Many have sympathised with the farmer, with a large chorus of “good on him” echoing from social media. One commenter on The Times’ report of the incident, who themselves claimed to be a farmer, said that the number of visitors to the countryside have “exploded” during lockdown, leading to a proliferation of “ignorance or wilful criminal activity”. Others noted that the car blocking his driveway could have hampered his ability to do his work, in doing so affecting him financially.

However, many have labelled his reaction to the incident “disproportionate”, with particular focus landing on the moment in the video when the shirtless protester is knocked to the ground by the telehandler.