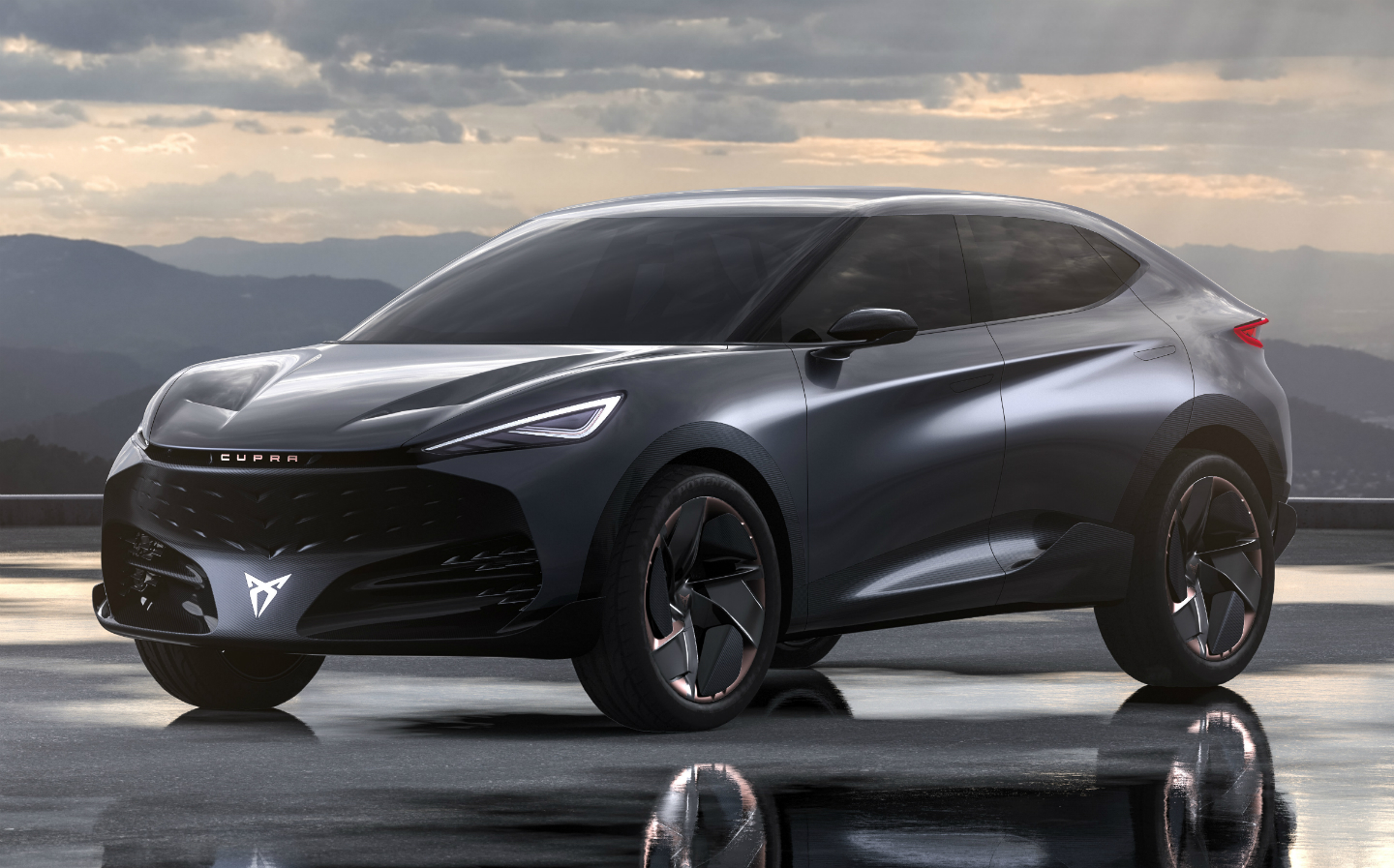 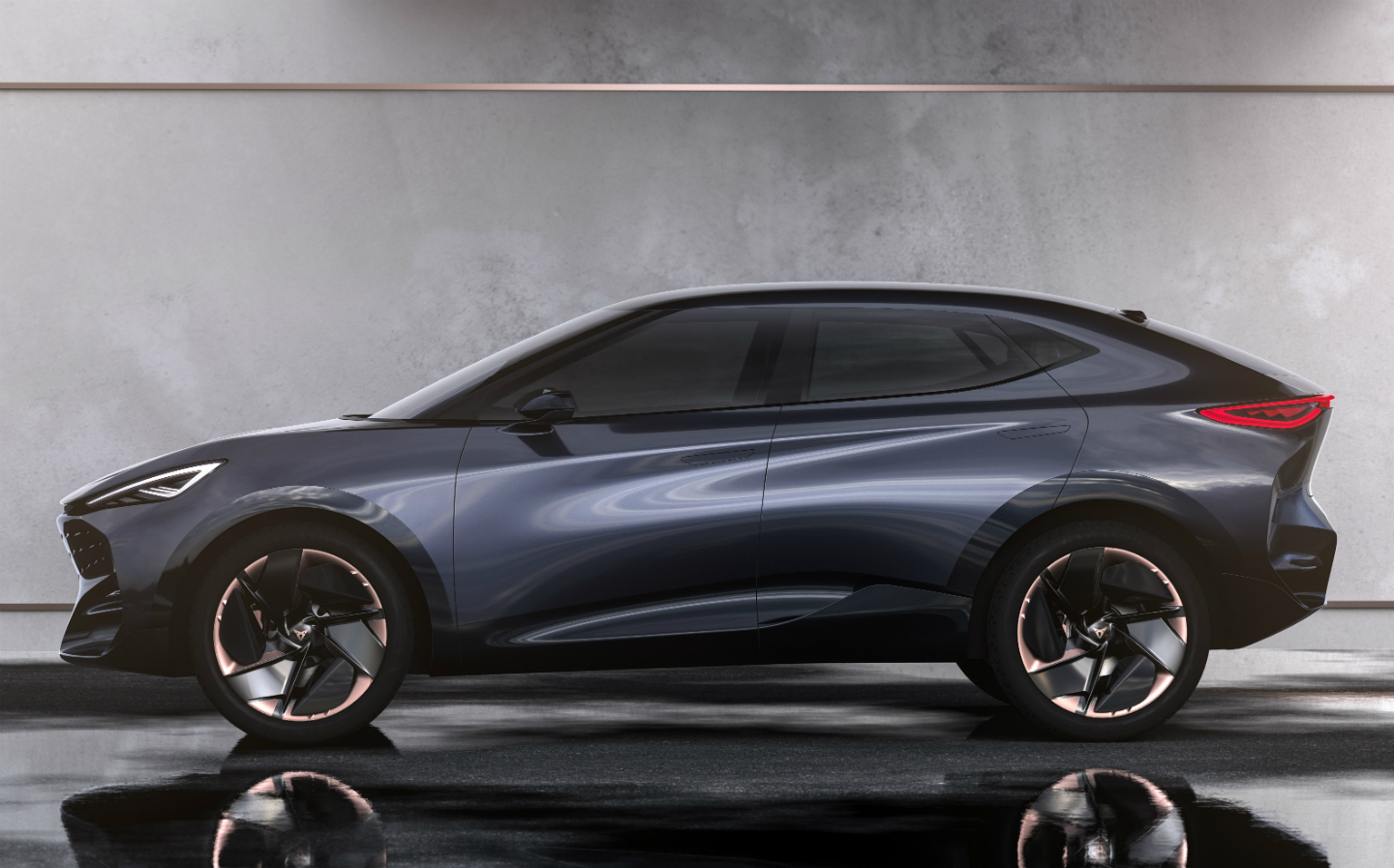 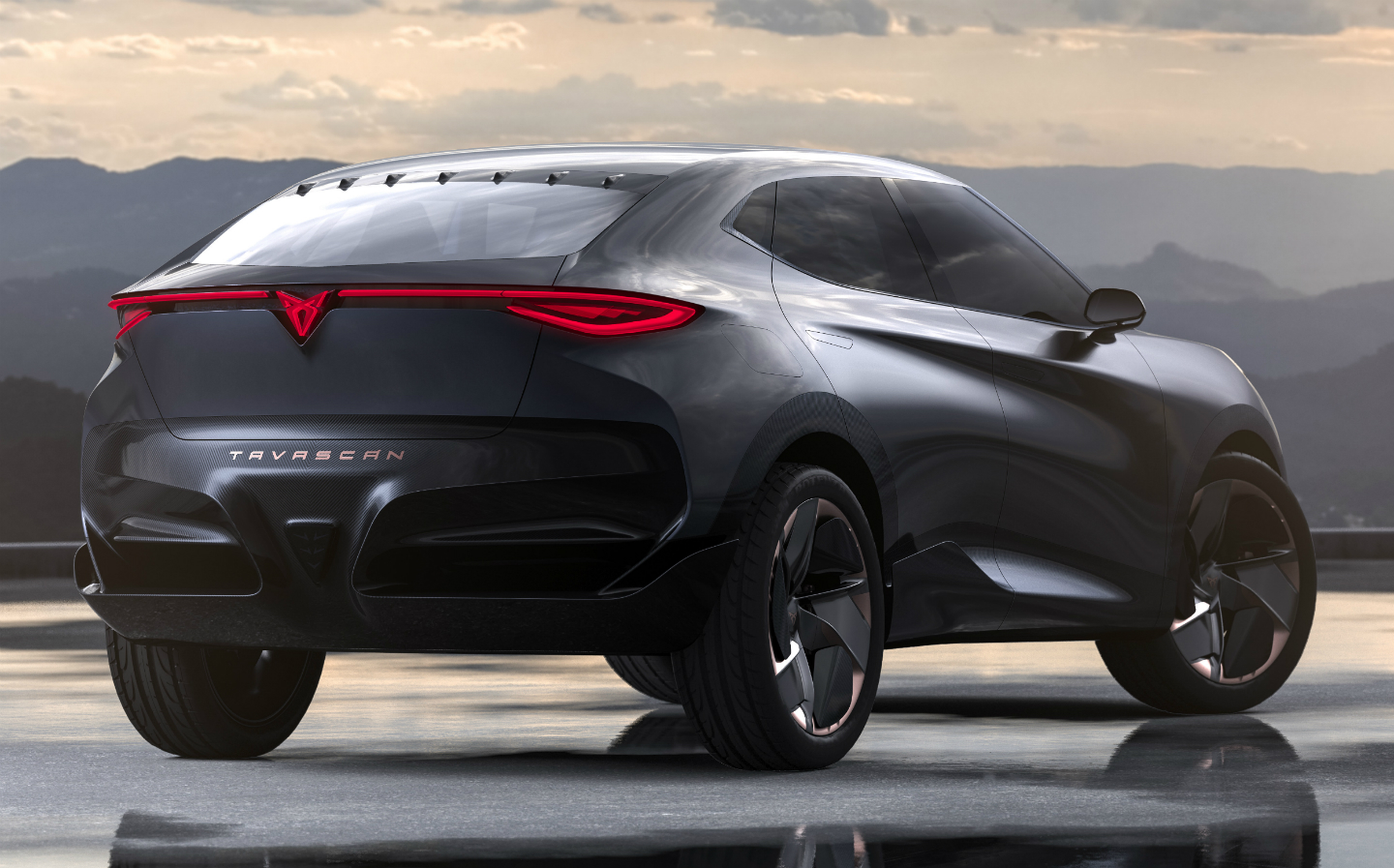 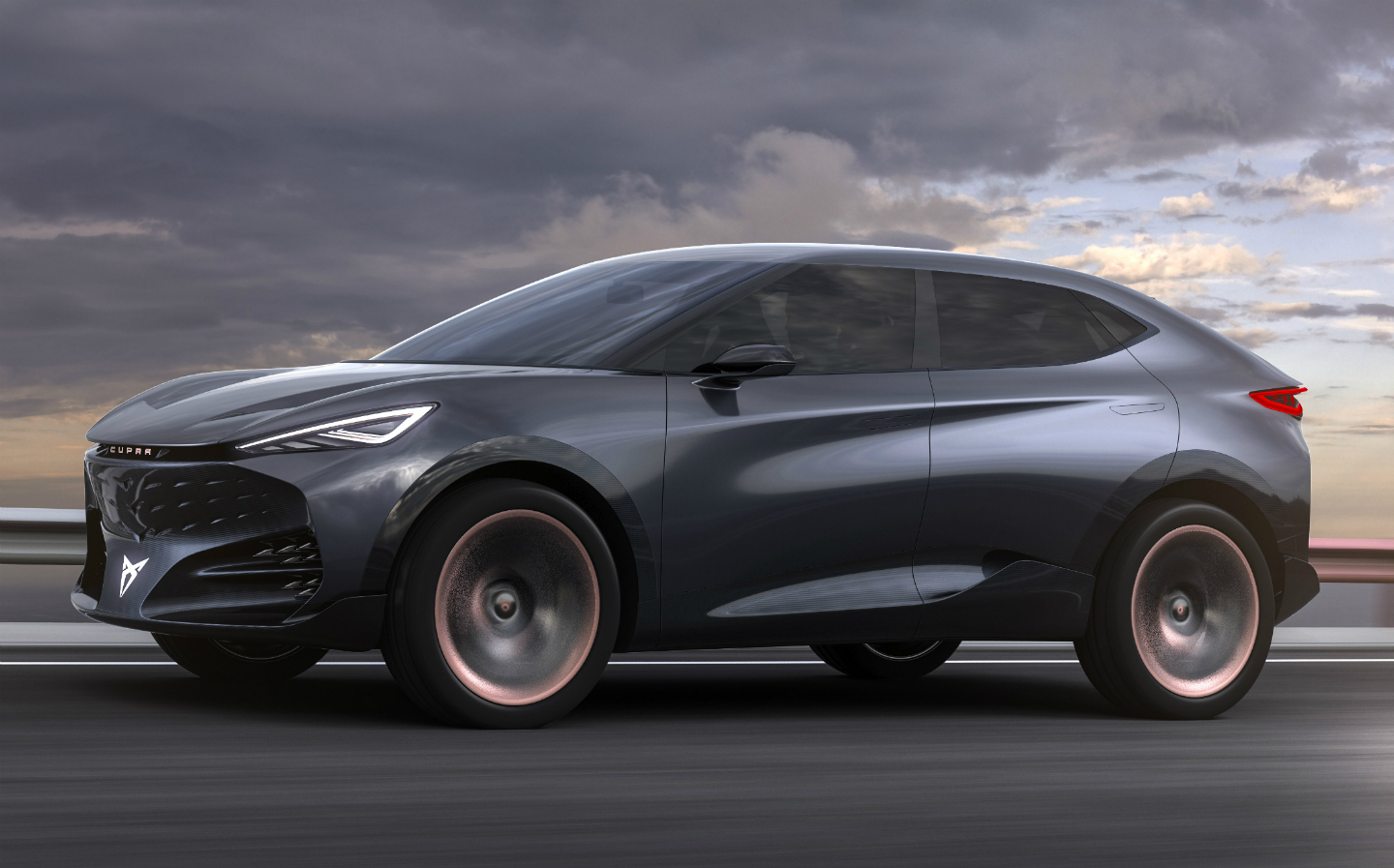 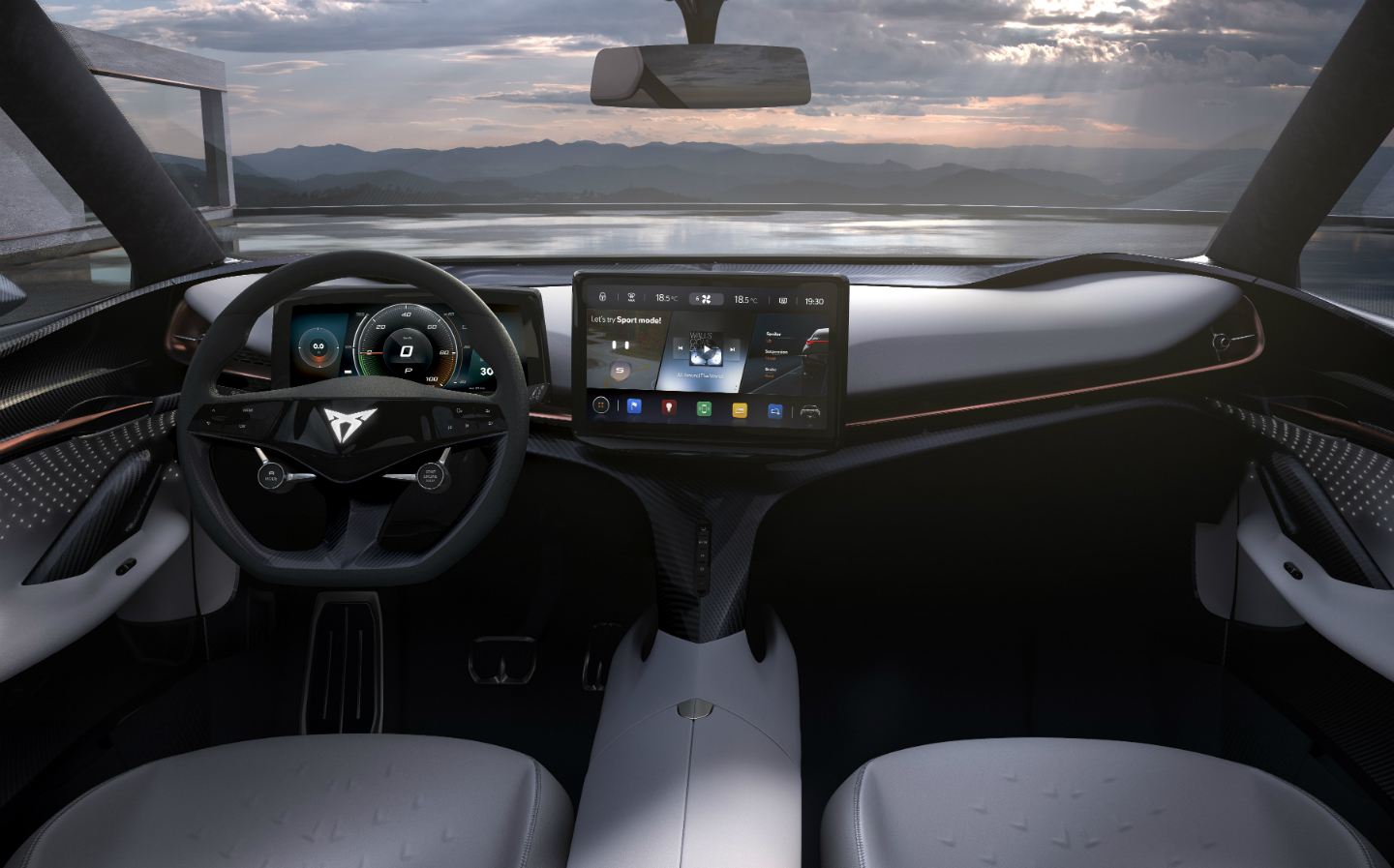 Officially, the smartly-styled SUV you see here isn’t a production-ready model; instead, Cupra claims the high-riding Tavascan is, for the time being at least, a “vision of electrified performance” and a showcase of “the potential evolution of the Cupra design [language]”.

However, it’s strongly suspected the Tavascan will make its way into Cupra showrooms sooner rather than later — becoming the SEAT spin-off brand’s first pure-electric production car in the process.

Making the Cupra Tavascan’s journey to a driveway near you even more likely is that, according to the car maker, it’s built on the “MEB” electric car platform developed by parent company Volkswagen, and set to be used by various Volkswagen Group brands like Seat, Skoda and Audi.

Unusually for an electric vehicle reveal, Cupra hasn’t even hinted at any charging times for its Tavascan coupé SUV concept. The car maker has said the vehicle uses a 77kWh battery pack (likely the same 77kWh battery pack that will be used in the zero-emissions Volkswagen ID.3 family hatchback, which is also slated for a Frankfurt Motor Show debut next week), and the Tavascan is supposedly good for an Audi e-tron-beating range of up to 279 miles on a single charge.

Befitting the Cupra concept car’s name, which is derived from a town nearby a ski resort in the Pyrenees mountain range on the Franco-Spanish border, the Tavascan is claimed to have all-wheel drive, with the front and rear axle each being powered by its own electric motor.

The motors are supposedly pretty punchy, too. Combining the power of the Cupra Tavascan’s two 151bhp electric motors results in a total output of 302bhp, which is good for a claimed 0-62mph time of 6.5 seconds. It also, Cupra says, makes the Tavascan the most powerful road car it’s made to date, as the SUV produces 6bhp more than the petrol-powered Cupra Ateca performance SUV and Cupra Leon hot hatch models.

While the Tavascan’s exterior has been designed with aerodynamic efficiency in mind (reflected in the turbine-style 22in alloy wheels) the performance focus has necessitated some rather distinctive details, including the prominent air intakes up front, with the vents lending the Tavascan a look far different from any other Cupra model to date.

When the Catalan car maker will introduce the Tavascan to its model range is still to be confirmed at the time of writing, as Cupra has yet to give any indication as to when the car could go on sale. The wait likely won’t be long, however, as the Tavascan isn’t the only electric coupé SUV the Volkswagen Group has had in the works. Volkswagen has confirmed its electric ID.CROZZ concept car will go into production in 2020, and the zero-emissions Skoda Vision iV coupé SUV design study, revealed at the 2019 Geneva Motor Show, is also set to become a road-going model next year.