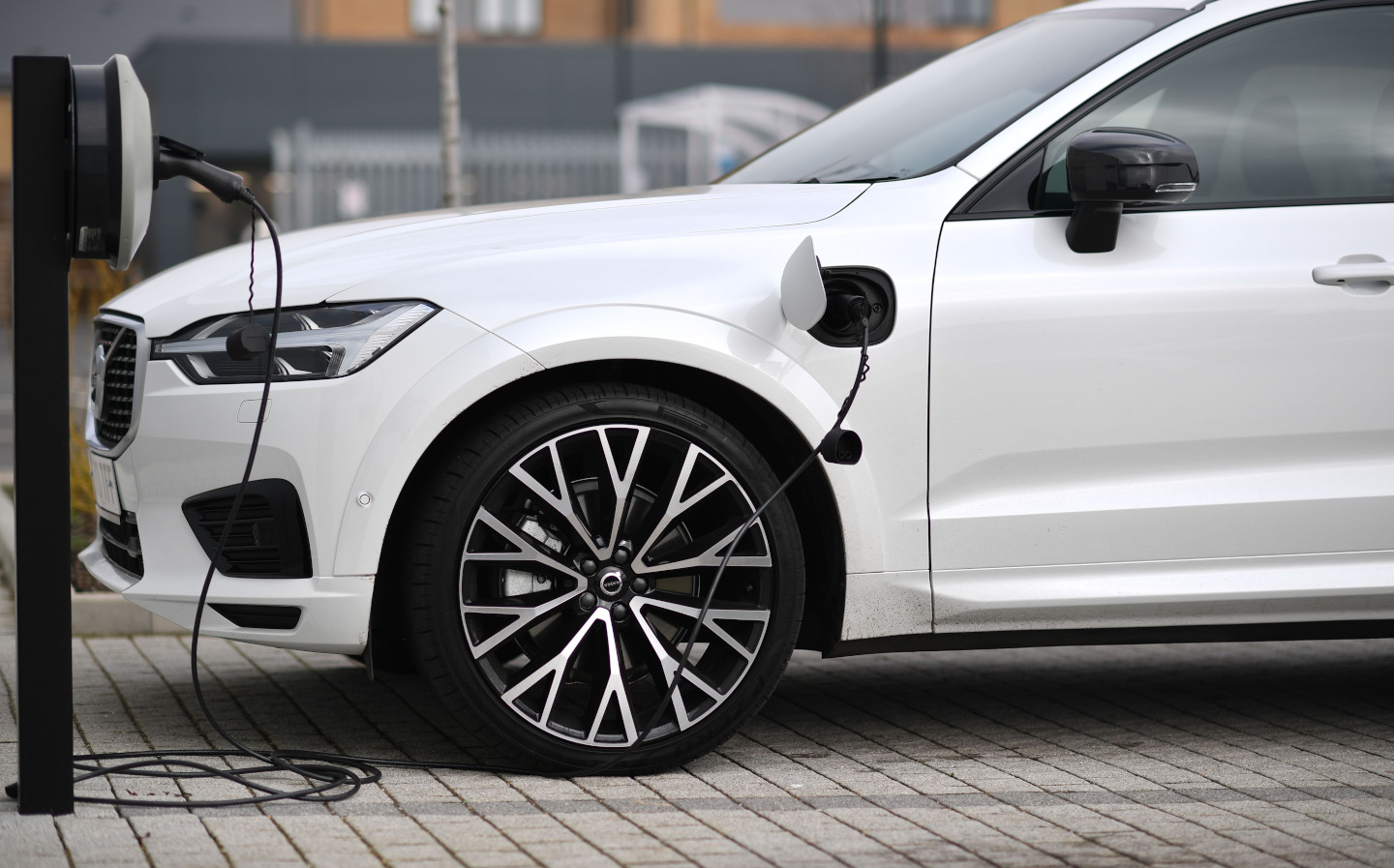 THE UPTAKE of electric vehicles has slowed following the reduction of the government’s Plug-in Car Grant (PiCG), according to new statistics from the Society of Motor Manufacturers and Traders (SMMT).

More than one in seven cars sold in 2021 will be either fully electric or plug-in hybrid, according to the SMMT’s most recent projections. However, in April, which saw the reopening of dealerships across the country as part of the government’s roadmap out of lockdown, more plug-in hybrid cars were sold than pure-electric cars, bucking the trend in 2021 so far.

The SMMT noted that this followed the reduction in the scope of the PiCG, which now takes the form of a £2,500 grant given to those buying a car worth £35,000 or less. It was previously a £3,000 subsidy available to anyone buying an electric car with a price tag of £50,000 or less, and before that buyers could get up to £5,000 off their new EV.

Plug-in hybrids represented 6.8% of the market, compared to 6.5% for pure-electric cars (called Battery Electric Vehicles, or BEVs, by the SMMT). Monthly uptake of pure-electrics was down compared to the first three months of 2021, when they represented around 7.5% of all new cars registered. 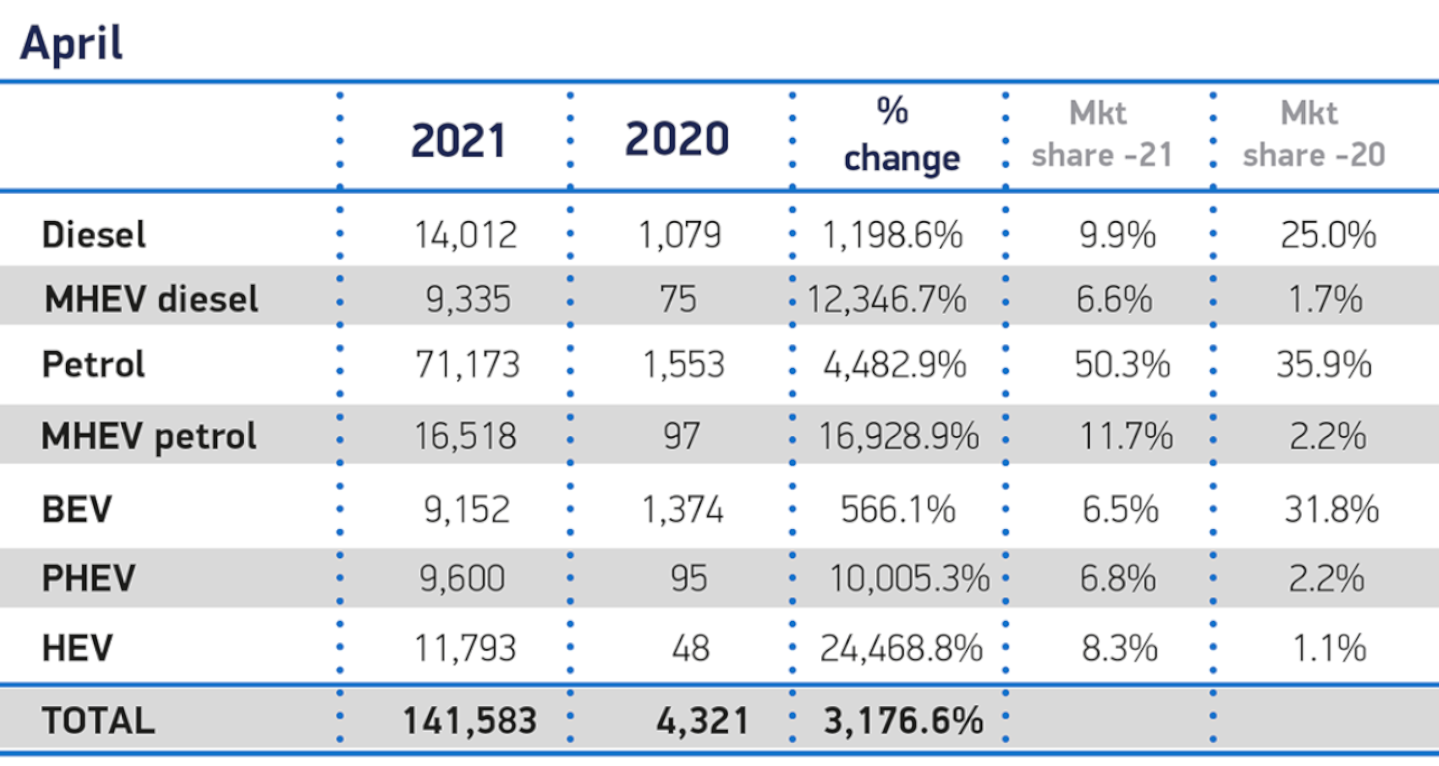 In light of the reduction to the PiCG, the SMMT has adjusted its forecast for sales of pure-electric vehicles in 2021. It now expects 8.9% of all new cars sold this year to be fully electric, rather than 9.3% as predicted earlier this year. While a 0.4% difference may sound negligible, it represents more than 73,000 cars.

Increments such as these may also prove important considering the government’s impending ban on the sale of new petrol and diesel cars in 2030.

“At 6.5%, Battery Electric Vehicle (BEV) sales remain in line with those from 2020, and SMMT have explained that they’re expected to grow over the course of 2021. Even with the grant change, SMMT predict a calendar year average of 8.9% market share for BEVs.”

They also pointed out that the PiCG is taken off the price of a car at the time of purchase, not the time of registration, meaning the SMMT’s April stats are likely to include a number of vehicles purchased when the £3,000 grant was still available. 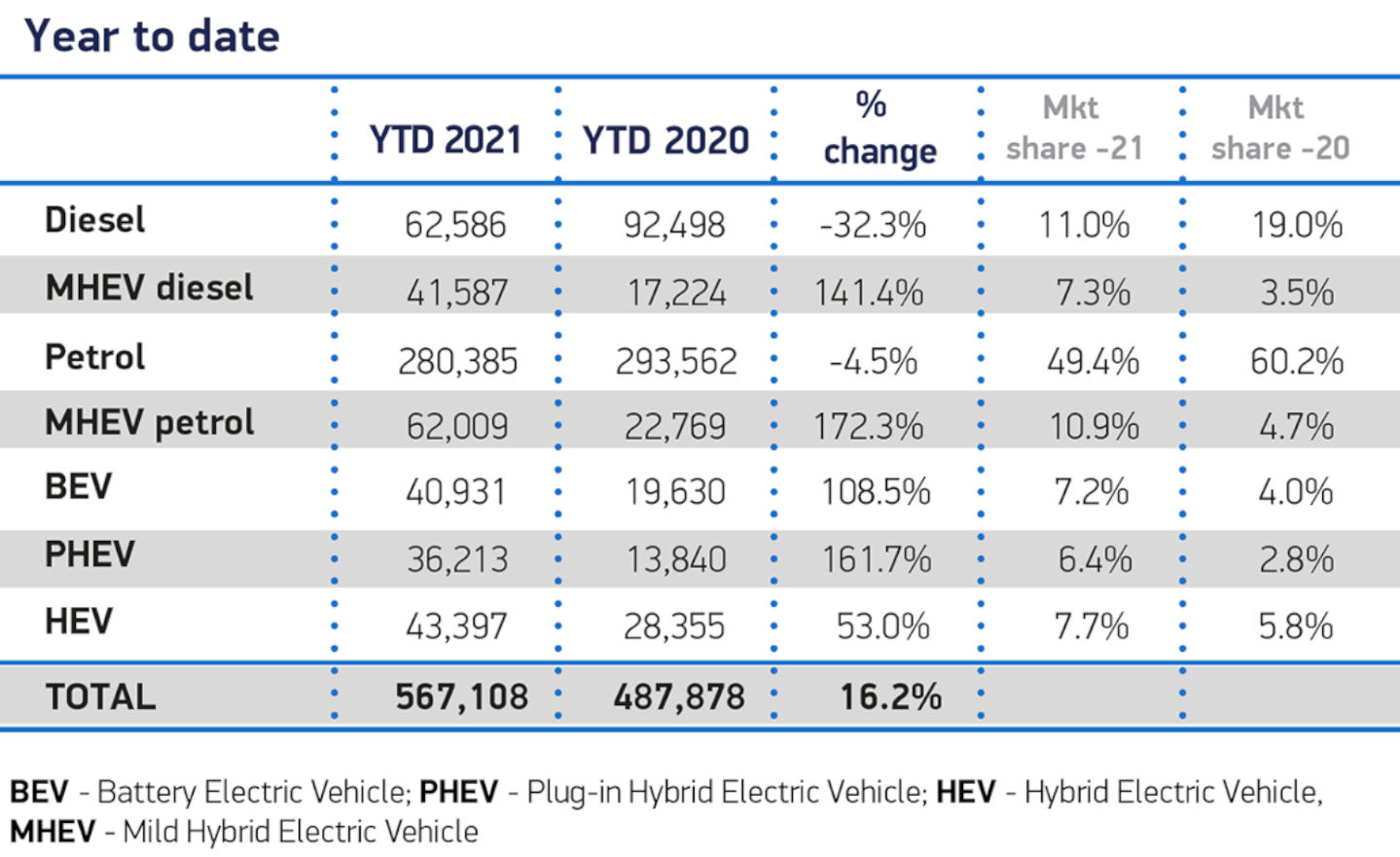 “Somehow it has survived the knockout punch but it’s important for the long-term well-being of the industry that new car sales start heading in the right direction, and some healthy numbers are put on the board,” he said.

“The backbone of any recovery will be electric and hybrid sales, which have proved to be the one positive amongst all the gloom over the past year.

“There is a clear message being sent out by UK consumers that they are keen to go green, and the industry and Government need to ensure that consumers are incentivised and motivated to buy electric and hybrid cars.

“The 2030 new petrol and diesel car ban is less than 10 years away and any loss in momentum in low emission car sales could derail the Government green industrial revolution plans.”

Overall April saw 141,583 cars sold, representing a mammoth 3,000% increase on the same month last year. However the SMMT noted that this stat was “superficial”, due to the fact that last April saw just 4,321 cars registered as the UK was plunged into its first national Covid-19 lockdown.

In reality the month was a way off the ten year average, with 12.9% fewer cars sold than in a standard April. However, showrooms were closed for nearly half the month, opening alongside hairdressers and barbers on April 12. Overall 2021 registrations now stand at 567,108 units, nearly a third (32.5%) lower than the average recorded over the last ten years. 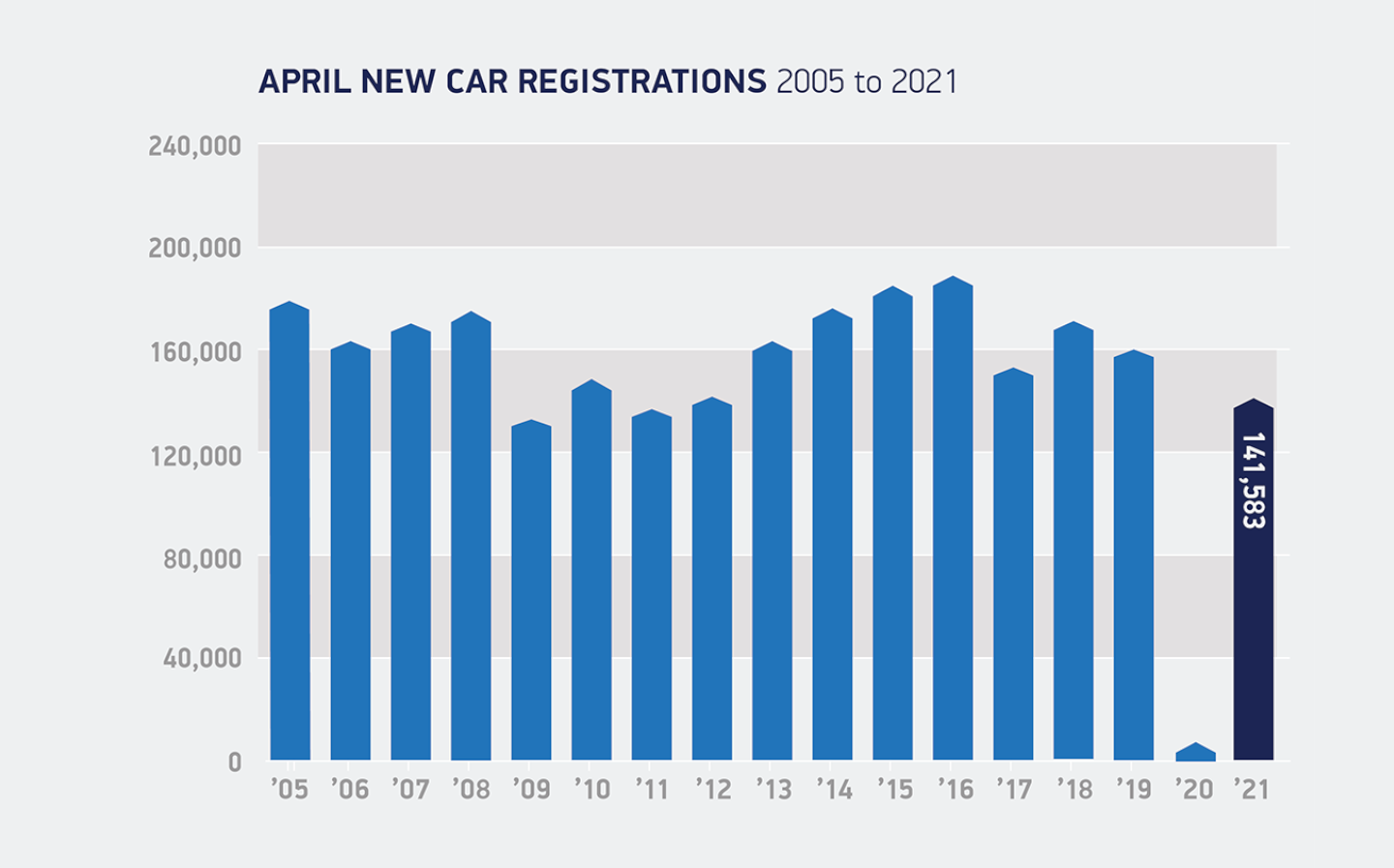 However, the SMMT noted that the full impact of the reopening of showrooms has yet to become evident due to the amount of time customers spend deliberating during the process of buying a new car, as well as the time needed for delivery of a vehicle. In fact, it changed its 2021 outlook to make it more optimistic, predicting that 1.86 million cars will be sold over the course of 2020, rather than 1.83 million as estimated before.

Commenting on the figures, SMMT Chief Executive Mike Hawes said: “After one of the darkest years in automotive history, there is light at the end of the tunnel. A full recovery for the sector is still some way off, but with showrooms open and consumers able to test drive the latest, cleanest models, the industry can begin to rebuild.

“Market confidence is improving, and we now expect to finish the year in a slightly better position than anticipated in February, largely thanks to the more upbeat business and consumer confidence created by the successful vaccine rollout.

“That confidence should also translate into another record year for electric vehicles, which will likely account for more than one in seven new car registrations.”

Experts and commentators praised the continued growth in sales of electrified vehicles, while saying that a strong finish to 2021 would be needed to ensure a return to pre-pandemic levels.

RAC data insight spokesman Rod Dennis said: “While new car registrations are well down on 2018 and 2019 it is very much an improving picture, and the story for electrified vehicles is particularly encouraging.

“Looking at the number of battery electric cars sold in just the first four months of the year it seems entirely plausible as life becomes increasingly more normal that total pure EV sales at the end of 2021 could top 150,000.”

He said: “To get a better sense of the current health of the market, we need to compare it with pre-pandemic levels. Although this April’s figures still lag behind those of previous Aprils, sales are edging closer to pre-pandemic levels, and there are further reasons for optimism now forecourts have reopened for business.

“March was a successful month for a start, bolstered by new number plates, and the early evidence from the re-opening of retail and hospitality is that people are ready to spend money saved during successive lockdowns.

“It was always going to take some time for the industry to return to pre-pandemic levels, but as restrictions ease further and the vaccination roll-out reaches all adults, we may start to see spending pick up on big ticket items such as new cars.

Other commentators agreed that signs of recovery were present, but that celebrations should be tempered with caution. Alex Buttle, director of used car marketplace Motorway.co.uk, said:

“Last month’s 3,000% leap in sales is a relatively meaningless percentage because registrations in April 2020 plummeted 97%, as the country was in the early grip of lockdown and non-essential retailers, including dealerships, were forced to close their doors to the public.

“April numbers are actually down 50% on March registrations. And while pent-up demand is clearly showing itself with showroom doors in England and Wales opening in the second half of April, this upwards trend needs to be consistent throughout 2021 to make up for the 2020-shaped hole in lost sales.

“The headwinds for growth are there – we have a clearer roadmap for recovery and the market is looking promising once again with a lot of optimism about surging EV sales.

“April saw continued impressive growth for new electric and hybrid cars, and the momentum is very much with greener motoring. The Government now has to ensure this momentum isn’t lost while its main focus is helping the country recover from the pandemic.

Karen Hilton, CCO of heycar, said that the pandemic had resulted in a permanent shift towards online car purchasing.

“We are seeing significant indications of how the pandemic has transformed the nation’s car-buying behaviour for good,” she said.

“This is chiefly demonstrated in a surge in customers who are now prepared to complete their entire purchase journey online. Our data indicates that since November as many as one in ten heycar users took this approach.

“We’re seeing particularly high interest in more remote areas of the country, away from large urban centres – where there are likely to be less showrooms nearby.”