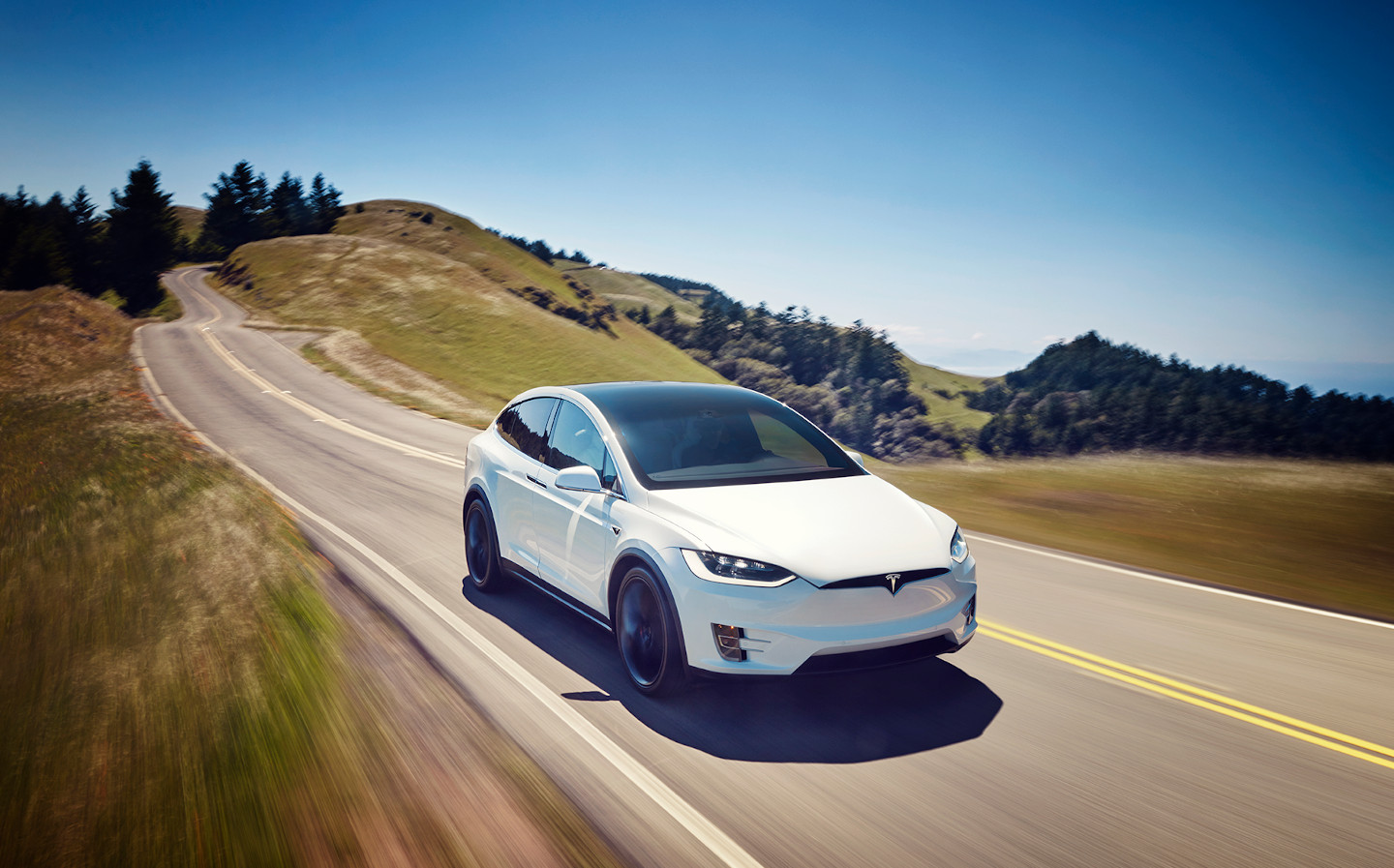 If you’ve been wondering what a electrified car is, or are confused about terms such as mild hybrid, plug-in hybrid car and pure-electric, then we can help explain the terms in the guide below.

The motoring landscape is rapidly changing, and there is now a bootful of terms to describe how different types of vehicle are powered; terms that didn’t exist a couple of decades ago, and a lot of them sound like they mean similar things.

However, when you dive under the bonnet there are some key differences. And they’re differences that you’ll soon have to become familiar with, as the ban on the sale of new petrol and diesel cars in 2030 looms large.

1. What is an electrified car?

Anything that includes an electric element to the powertrain. These can include anything from cars with petrol or diesel engines that are supplemented with a small electric motor and battery to ones that do away with the internal combustion engine completely. All of the types of vehicle listed can be considered “electrified”. 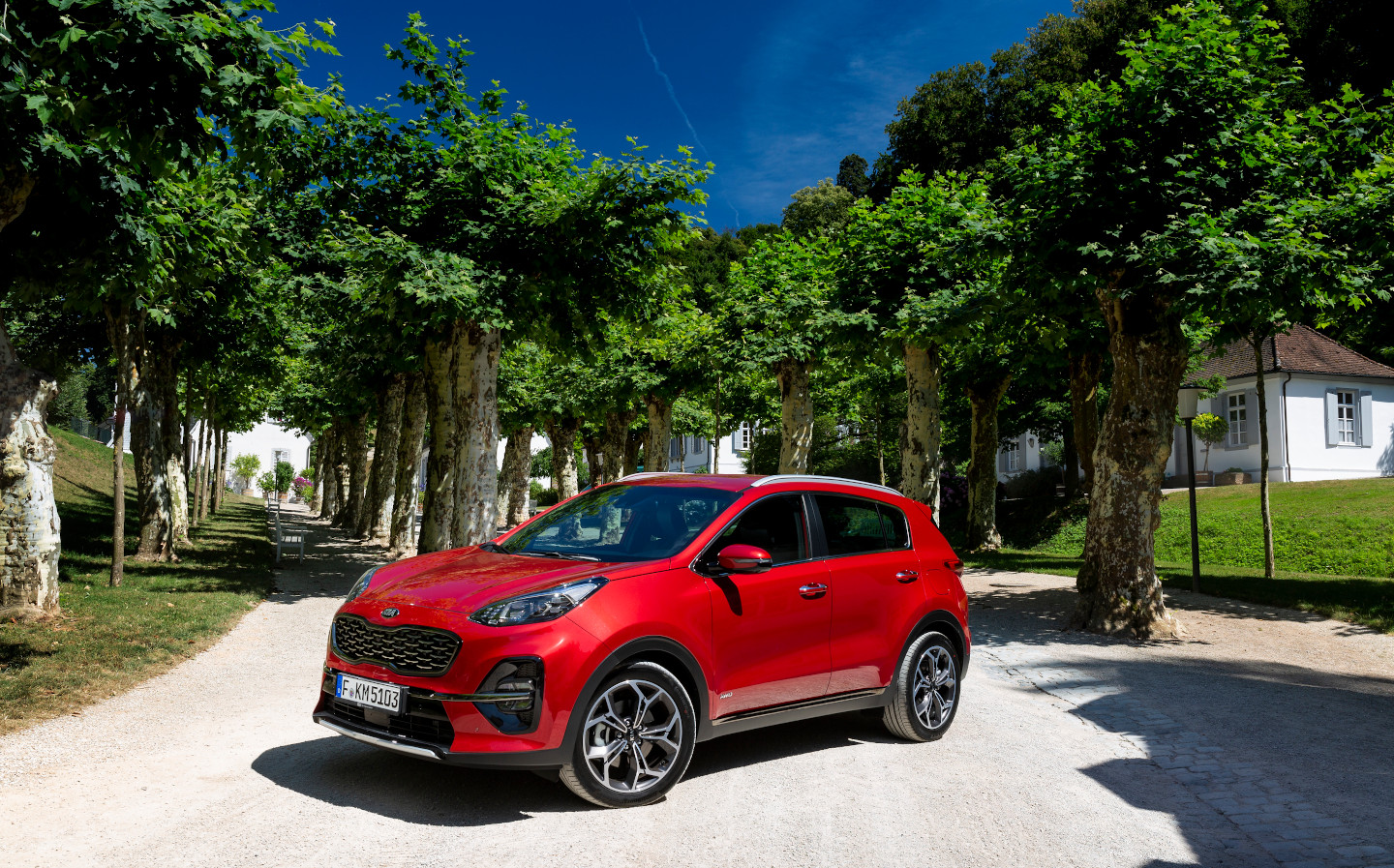 What is a mild hybrid and how does it work?

Unsurprisingly given its name, a mild hybrid car is the least electrified type of hybrid. Its small electric motor is attached directly to the engine or transmission and works in a similar way to a turbocharger, providing a little boost for the engine under acceleration. This can help improve fuel economy and reduce emissions.

The motor may also reclaim energy during deceleration. MHEVs have smaller batteries than a full hybrid, as energy is stored very temporarily before it is deployed again, and a mild hybrid isn’t able to run on electric-only power.

As the least electrified of the hybrids, mild hybrids have the smallest impact on a car’s emissions. However, it’s becoming a popular form of adding extra life to standard petrol and diesel engines, allowing them to meet toughening emissions standards. For motorists, it makes very little difference to the driving experience — MHEVs feel like traditional cars.

What’s the difference between a mild hybrid and a full hybrid? 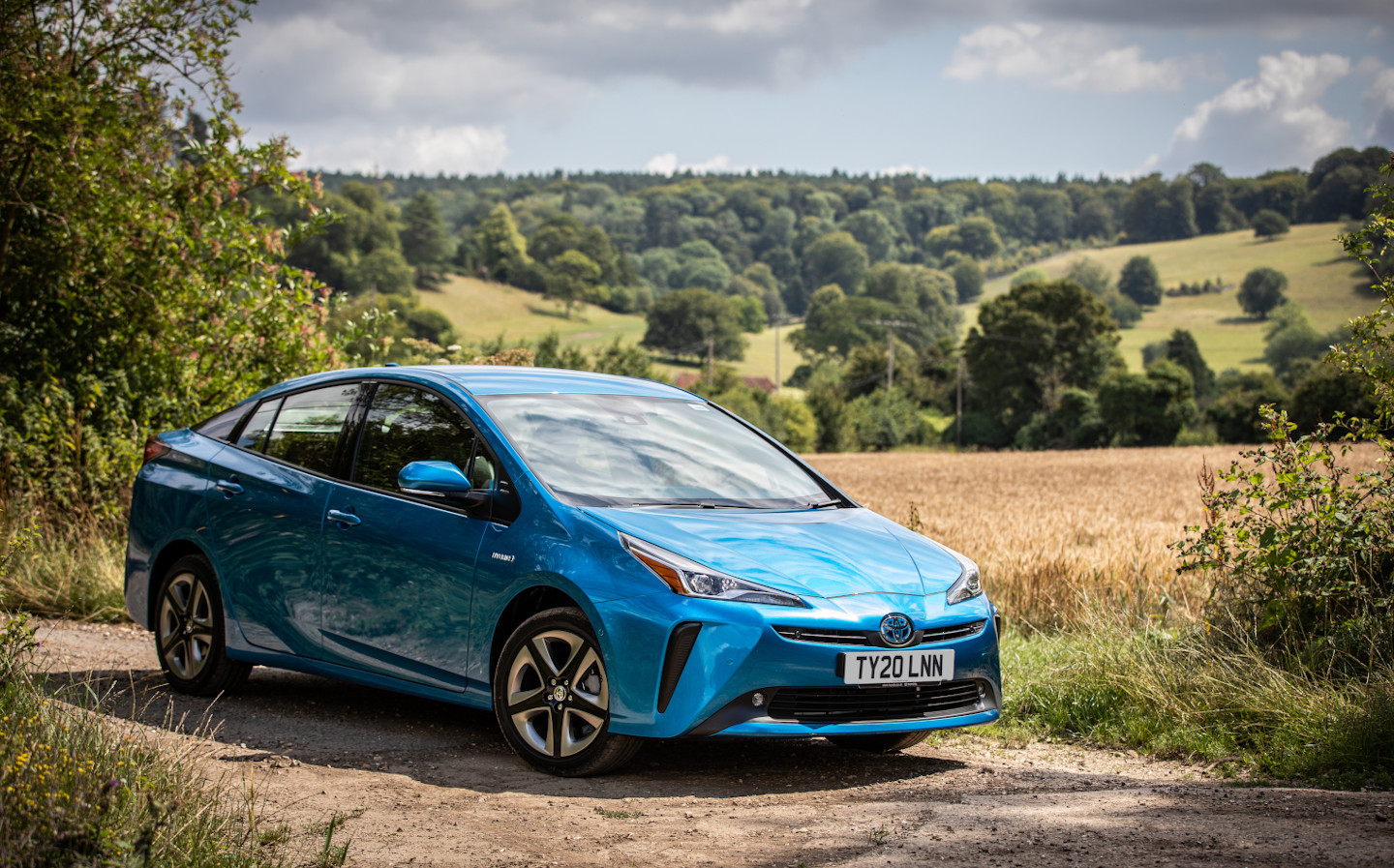 A full hybrid is a vehicle that can be powered by an electric motor, though in concert with an internal combustion engine. Electric-only power is available only for very short distances, usually up to a mile, due to the battery pack being very small compared with a plug in car.

Although brands like Toyota have marketed their full hybrid cars such as the Prius under the term “self-charging”, they self-charge using the petrol or (very rarely) diesel engine.

Regenerative braking, where kinetic energy from the brakes is converted to electrical energy in the battery, can improve efficiency.

Electric-only power is used in situations like parking, or gentle acceleration, before the internal combustion engine (ICE) fires up to do the heavy-lifting.

Full hybrids have proved particularly fuel efficient in urban and suburban situations, though they don’t tend to get as many miles per gallon as diesel (or even non-electrified petrol) cars on motorways. 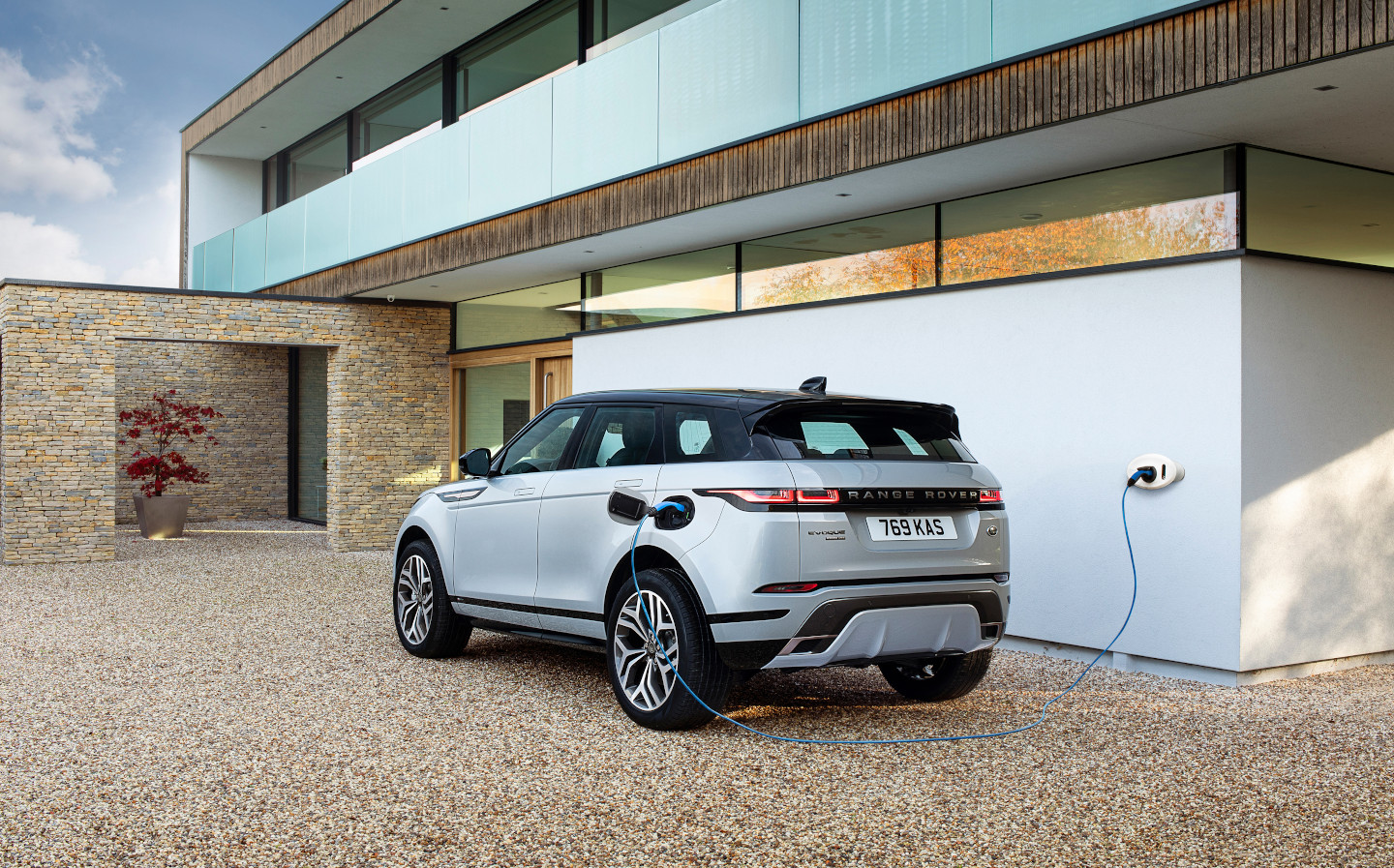 What is a plug-in hybrid and how does it work?

A plug-in hybrid is an evolution of a full hybrid, with a bigger emphasis on electrification. PHEVs have larger batteries than full hybrids, which means they have a much bigger electric-only range — though still much less than pure-electric cars.

For example, a Range Rover Evoque PHEV has an advertised electric-only range of up to 41 miles per charge, which is more than enough to get you to the local shop and back, or maybe even to and from work, but isn’t sufficient for long journeys — which is when the internal combustion engine kicks in.

This is convenient for longer trips, as when the car then runs out of petrol or diesel you can simply refill at a petrol station and be on your way again, though fuel economy can be even worse than a full hybrid on long motorway journeys as PHEVs carry around extra weight in the form of the bigger battery.

They make up for it around town, though, with their greatly increased zero-emission range. Depending on your circumstances, a PHEV could make visits to the petrol station very rare indeed.

Running on electric power is both much cheaper and much better for the local air quality, and there are also excellent cost savings for company car drivers in terms of benefit in kind when compared with petrol, diesel car and full hybrid.

Does a plug-in hybrid recharge while driving?

Yes, a small amount of energy can be recovered under braking, while the combustion engine can be used to charge the battery — acting as a generator — though doing so is not very efficient compared with filling the battery using the plug, via a charging point or electrical socket.

Slow charging can be achieved by a standard 13amp three-pin socket at homes and workplaces, and will take around 5-12 hours to recharge your PHEV, depending on the size of its battery pack. If using these, make sure the socket is checked out or installed by a qualified electrician, to avoid fire risk (plug-in cars take a lot of amps for a long time, so the wiring needs to be able to handle it).

Dedicated fast chargers of 7kW or 11kW can be installed at home or work, too, and are often found public spaces where you might be parked up for a couple of hours, such as car parks and supermarkets. It takes around 4-6 hours to charge a 40kWh battery.

Rapid chargers and ultra rapid chargers are usually found at motorway service stations, and can recharge most EVs to 80% in under an hour, though many PHEVs don’t have rapid charging capability — you may find its on-board charger can only draw up to 11kW.

What’s the difference between a plug-in hybrid and a full hybrid?

In full hybrid (also known as a self-charging hybrid) and plug-in hybrid cars both the electric motor and combustion engine work together to generate power and move your car. However, plug-in hybrids have larger batteries for extended electric-only driving, and these can be topped up via an electrical socket.

Where can I charge my plug-in hybrid?

According to Zap Map, there are over 38,000 connectors in over 14,000 locations across the UK. You can plug your car in at home or work using a standard wall plug (providing you have the correct cable and the socket has been checked/installed by a qualified electrician), but many public car parks and spaces have charging points such as motorway service stations, supermarkets, libraries, leisure centres, hospitals and train stations. 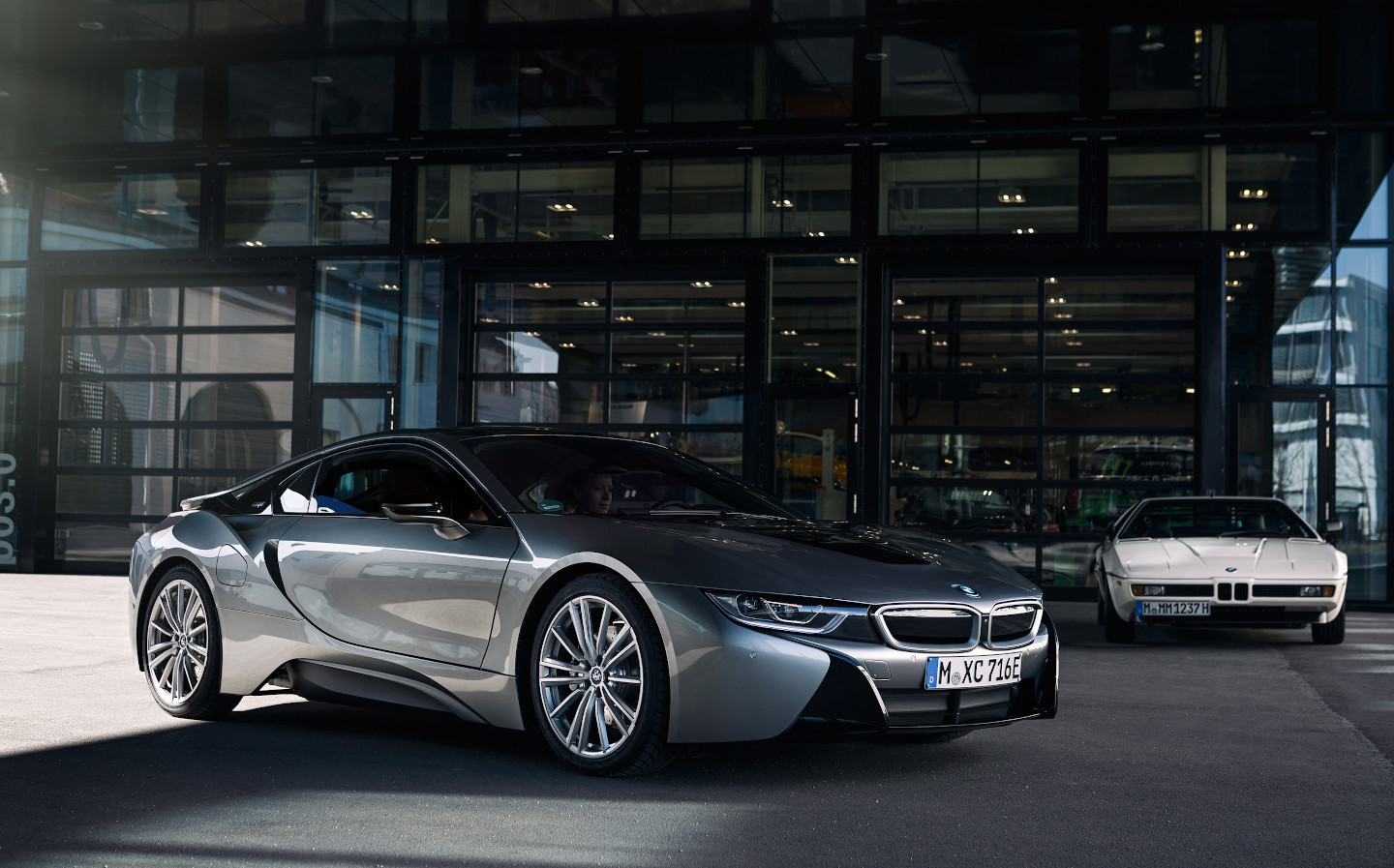 An extended-range electric vehicle (E-REV) is a type of hybrid, essentially, but one in which the wheels are solely driven by the electric motors. The petrol (or, rarely, diesel) combustion engine acts only as an electrical generator, to allow the vehicle to keep going if there are no opportunities to plug in to recharge the battery.

As with PHEVs, the aim of E-REVs is to eliminate “range anxiety”, which is oft-quoted as a reason that people are reluctant to transition to pure-electrics (below). As public charging infrastructure improves, and the range and recharging speed of pure-electric cars improve, however, the point of both PHEVs and E-REVs diminishes.

There aren’t many cars currently in the UK that use the E-REV powertrain, but it was found on the BMW i8 and an early version of the i3, as well as the Vauxhall Ampera and the Chevrolet Volt — all of which have now been discontinued.

A pure-electric car is one that combines one or more electric motors with a battery and does not have a petrol or diesel motor on-board. There are a number of different names for the same thing: the Society for Motor Manufacturers and Traders (SMMT) favours “Battery Electric Vehicle” (BEV), while some go with the term “fully electric”.

Others simply call them “electric cars”, so you can generally assume they mean pure-electric, though it’s a slightly vague moniker.

The market for pure-electric vehicles is expanding rapidly, with sales tripling over the last year, despite the coronavirus pandemic causing overall car sales to plummet.

When many people think of pure-electric cars, the first name that comes to mind will be Tesla — justifiably, considering the Elon Musk-fronted marque was the pioneer of sexy, long-range, powerful electric motoring more than a decade ago. It now has four cars on sale, with two more on the way, along with a pure-electric lorry.

Pure-electric cars are (for now, at least) what the future looks like, with hybrids of all forms (see below) thought of as a stepping stone towards a zero-emission road network. Even smaller sports car companies such as Lotus have announced their intentions to go pure-electric in the foreseeable future. 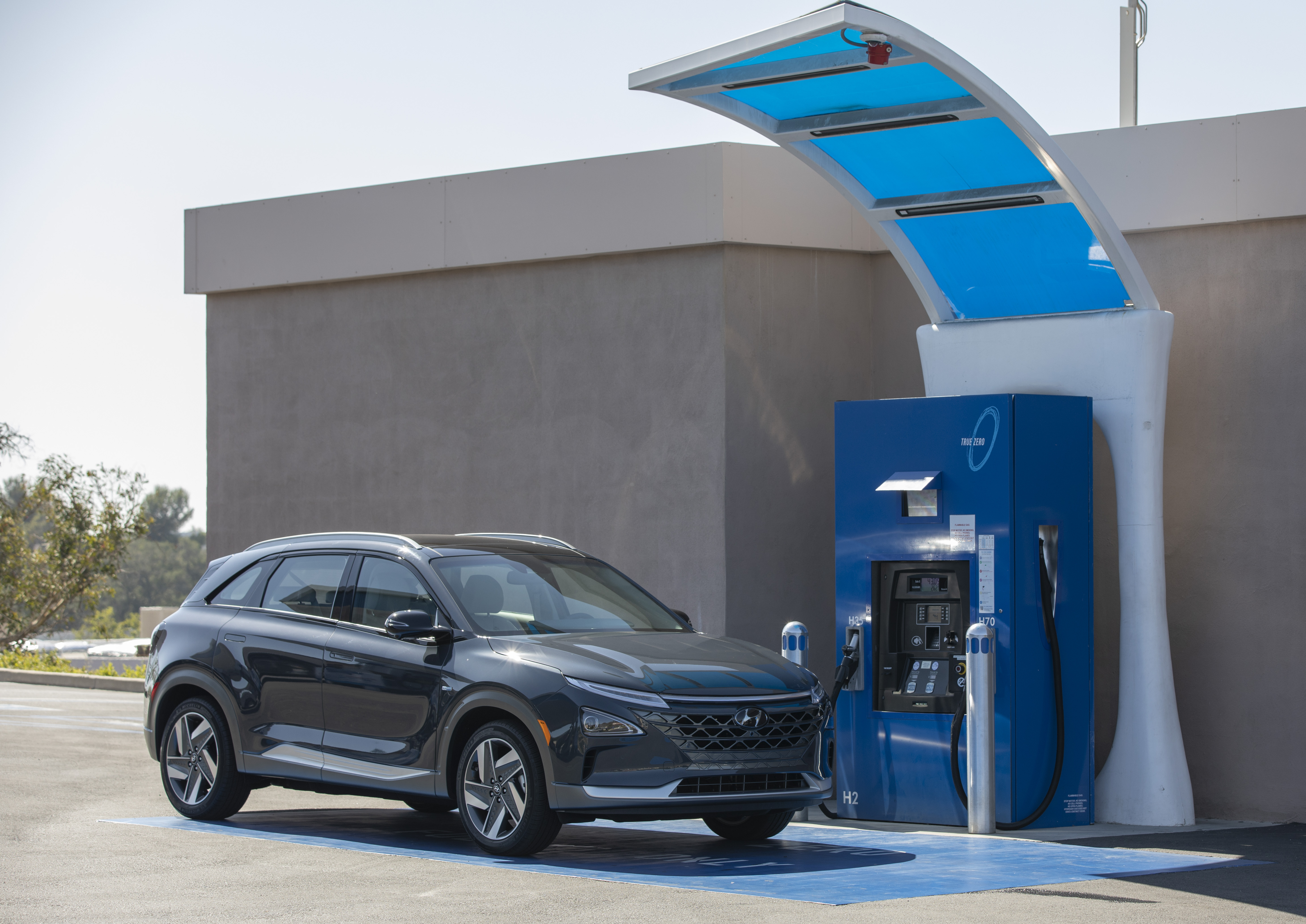 Hydrogen fuel cell cars are a type of electric vehicle — the wheels are turned by electric motors, after all. It’s just that instead of storing their energy in a battery, it’s stored as compressed hydrogen gas in steel and Kevlar-reinforced canister. The gas is released into a fuel cell stack, where it’s combined with oxygen from the air and the reaction creates electricity, with the by-product being harmless water (H2O).

There are a number of advantages over battery electric cars. The gas tank is much lighter than a battery pack, and it doesn’t require mining of lithium and cobalt — the latter of which has been known to come from countries that turn a blind eye to dangerous mining practices and child labour, such as Congo. Also, refuelling a car with a 300-mile range takes five minutes, whereas you’re looking at more than half an hour for a BEV car.

You may have sensed a ‘but’, and you’re right — there are a number of problems with fuel cell cars. The main one is cost — because they’re so rare (you can count the number registered in the UK each year on your hands), the prices are high: the Hyundai Nexo pictured costs from £69,495, even though it’s not supercar-quick, like a Tesla.

It also costs more than £76 to refuel, based on a hydrogen price of £12 per kg (including VAT) and the Nexo’s 6.4kg tank, so there’s no fuel cost saving over petrol or diesel.

Finding a place to fill up is even more of an issue — there are around 12 publicly-accessible hydrogen refuelling stations in the UK, whereas you can plug in an electric car almost anywhere you find a three-pin socket.

What’s more, creating the hydrogen gas requires energy in the first place, as does compressing it and transporting it — electricity can be delivered to cars from power stations directly via existing cables, and the energy mix is getting cleaner every year.

Some still see hydrogen as the future but without massive investment in infrastructure, it could be the Betamax to battery electric cars’ VHS.

– If you found our explanation of mild hybrids, plug-in hybrids and electrified cars useful, you might also like our guide to London’s ULEZ
– Looking to buy a hybrid car? We recently reviewed the Jaguar F-Pace.
– Or if you’re after a pure-electric car, we’ve also reviewed the BMW IX3 Electric SUV.