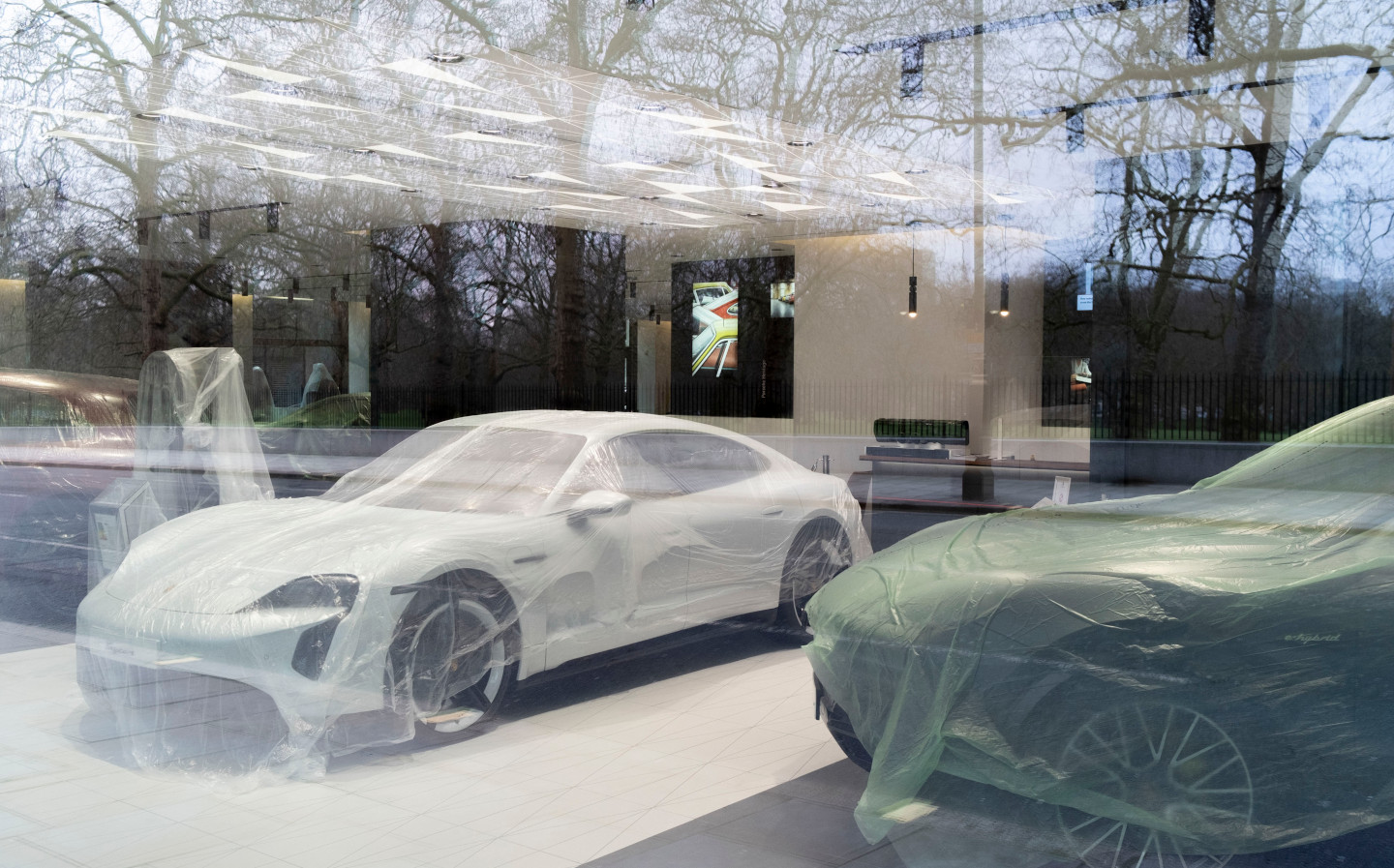 Registrations last month were 11.5% higher year-on-year, at 29,280 units, according to figures from industry body the Society of Motor Manufacturers and Traders (SMMT).

However, the trade association noted that March 2020 saw the introduction of the first coronavirus lockdown, which caused sales to plummet by 44.4% compared with the year before.

It also pointed out that sales last month remained more than a third (36.9%) lower than the 10-year March average, as showrooms remaining closed under the rules of the third coronavirus lockdown.

Dealerships have been permitted to run click-and-collect services, allowing them to sell 283,964 collectively, a compromise the SMMT called a “lifeline for the sector”. 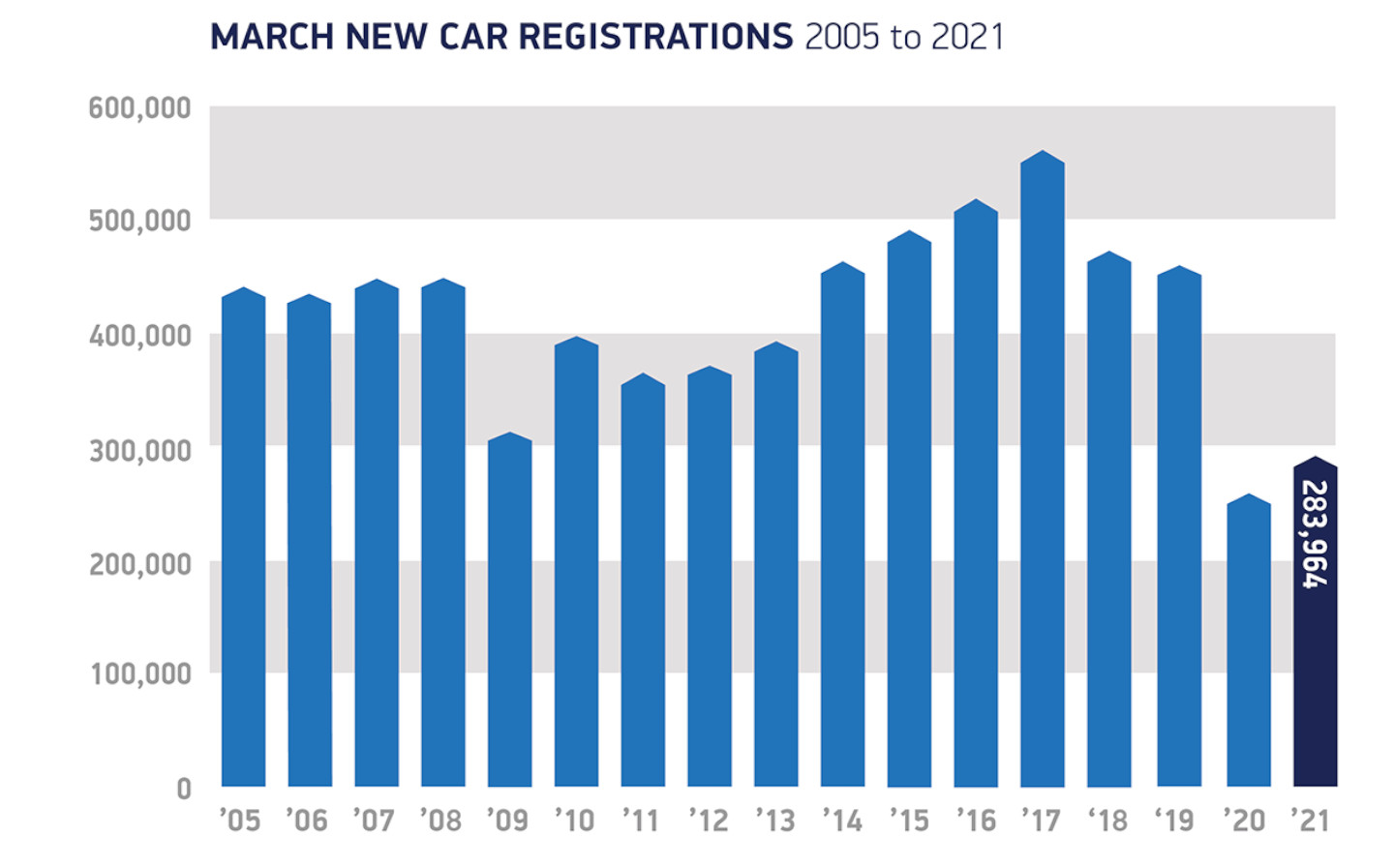 March is one of the most important months in the calendar for dealerships due to the number plate change, which last month comprised a change from “70” registration plates to new “21” plates.

SMMT chief executive Mike Hawes previously labelled the government’s decision not to allow dealerships to open in March “deeply disappointing”. They will instead open along with businesses including hairdressers and barbers on April 12.

“The past year has been the toughest in modern history and the automotive sector has, like many others, been hit hard,” Hawes said. “However, with showrooms opening in less than a week, there is optimism that consumer confidence – and hence the market – will return.

“We know we will see record-breaking growth next month given April 2020 was a washout, but a strong and sustainable market is possible if customers are attracted to the choice and competitive offer the industry is able to provide within the safest of showroom environments.”

The SMMT estimated that to return to pre-pandemic sales levels for the year as a whole, 8,300 cars per day (or around 250,000 per month) would have to be sold for the rest of 2021 — an unlikely possibility, given that the industry has averaged around 7,400 per day over the last decade.

Growth in March was driven entirely by fleet purchases (i.e. cars purchased by companies for employees), which increased by 28.7% compared to last year, while private purchases fell by 4.1%.

Adhering to a trend that is now becoming familiar, the purchase of electric cars also grew, in the same month as the government lowered the amount and threshold of its plug-in car grant. 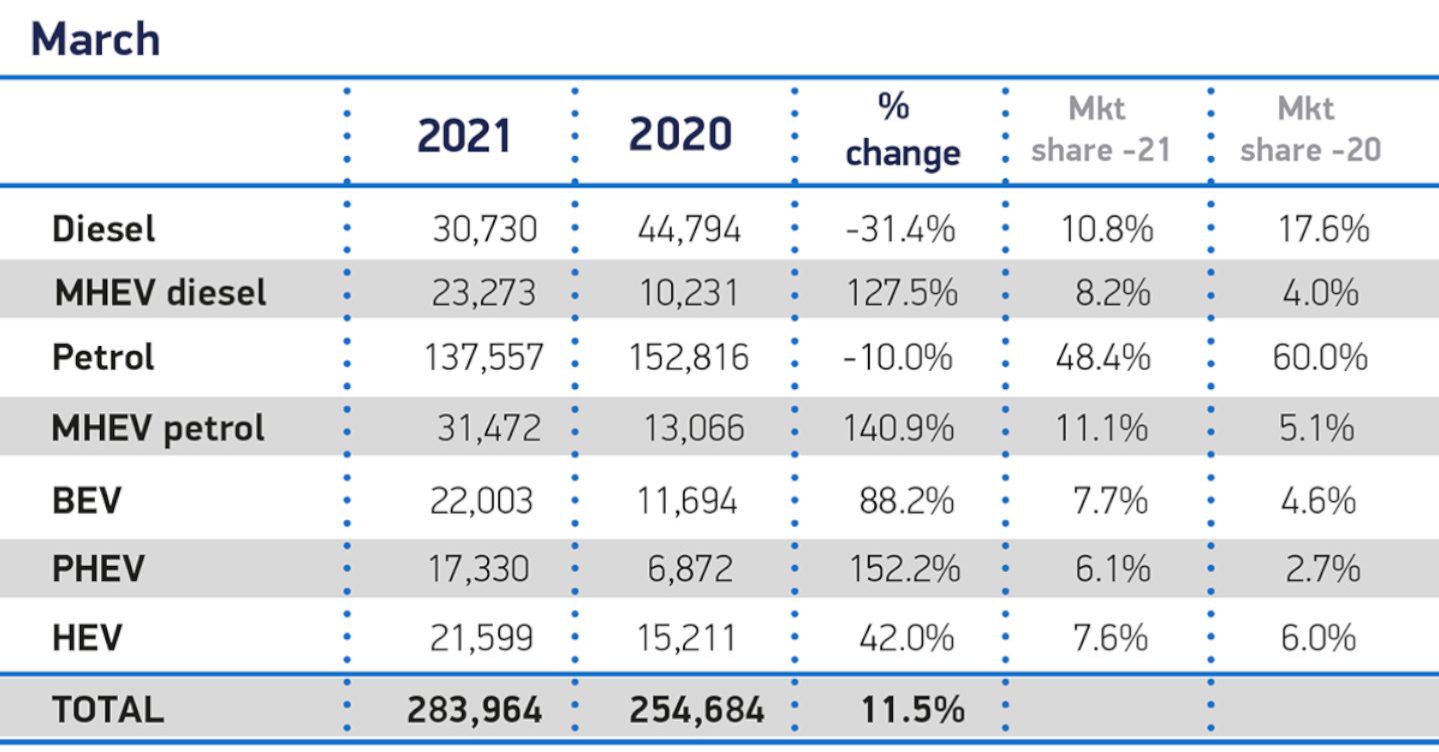 RAC spokesman Rod Dennis said: “Despite the ongoing effect of the pandemic, when it comes to electric car sales March was a remarkable month – it was the best single month for sales of new zero-emission electric cars on record, beating last December by less than 100 sales. Plug-in hybrids also sharply rose in popularity, with the number sold 40% higher than in September, the last best month for sales.”

March saw 22,003 pure-electric (called battery-electric by the SMMT) sold as car makers including Porsche and Kia revealed new electric models. The figure represents an 88.2% increase on March 2020, which was itself an increase of threefold compared to March 2019.

The SMMT noted that the number of plug-in hybrid and pure-electric models available for purchase increased from 72 to 116 over the course of the last year.

Pure-electric cars now represent 7.7% of the new car market, an increase of 3.1% compared to 2020 as a whole. Meanwhile, pure-petrol’s dominance of the market dwindled from three fifths to less than half (48.4%). Many petrol and diesel cars are now being sold with mild hybrid set-ups, which involves fitting a small electric motor to the engine to help do some of the heavy lifting under acceleration, to increase efficiency and reduce emissions.

Despite the significant drop from the 10-year March average, commentators struck a positive note, noting the rise compared to March 2020 and remaining optimistic that the lack of sales during the traditionally busy month would simply be delayed until showrooms reopen next week.

James Fairclough, CEO of AA Cars, said: “Whether it was the light at the end of the lockdown tunnel or the arrival of the new licence plates, March’s uptick in sales provided a much-needed boost to dealers. There’s now a renewed sense of optimism in the industry as forecourts begin to open in Scotland, and dealerships in England prepare to follow suit next week.

“These figures are a sign that there is plenty of pent-up demand for new cars, and dealers are understandably hoping for a strong recovery in the coming months.

“Soon after forecourts reopened after the first lockdown last summer, sales spiked 11% higher than they had been at the same time in the previous year. If dealerships get anything like that sort of bounce this spring, it could inject confidence and optimism for the remainder of the year.”

Alex Buttle, director of used car site Motorway.co.uk, shared similar sentiments and called for a period of undisturbed sales that would allow the market to regain its footing.

“The real game changer for new car sales should come from April 12, when car showrooms can open their doors to the public again,” he said. “Showrooms opening can’t happen soon enough for the new car industry to take off, especially with EV purchases showing real traction for growth in 2021.

“Although dealerships were able to seamlessly switch back to offering a fully online buying experience when the country went into lockdown for the third time at the beginning of January, new car sales have been breaking records for all the wrong reasons this year.

“The UK new car industry needs a prolonged period of positive news to shake off its malaise. New car sales need a mighty boost to rise out of the doldrums, but a spring and summer of solid sales should really turn things around.”

Jim Holder, editorial director at What Car? agreed, saying that forecourts needed to open on a permanent basis to ensure a full recovery:

“March results show the resilience of the industry and its ability to adopt the use of new technologies. Many feared dealers would suffer far worse than this in what is usually the biggest month for registrations, but today’s results are a great testament to the rapid growth in online selling and click-and-collect services, and highlight just some of the transformation in how we buy cars that is likely here to stay forever more.

“However, the better-than-expected results can’t hide the fact the figures are still well below a normal March – and first quarter. This month marks a full year since the country first went into lockdown. This has been a very difficult year for the sector, and the hope must be that when showrooms in England and Wales reopen on April 12th, it will be done on a permanent basis.”

He also said that research by the magazine had shown that around half of people considering buying a car are planning on doing so within the next three months, news that will come as a relief to those crossing their fingers for a strong April showing.

Karen Hilton, chief commercial officer at heycar, said some consumers will have delayed making a purchase “until they can give tyres a kick and have a look under the bonnet.”

She added: “With today’s figures showing an 11% rise in new car registrations, the return of customers to forecourts points to a brighter spring and summer for the industry, with all indicators suggesting the traditional March sales surge will take place this month.”

She also noted that the continued rampancy of coronavirus throughout Europe is causing continued supply chain issues, leading to a long waiting time on a number of new models. She said this was causing buyers to turn to the used car market.