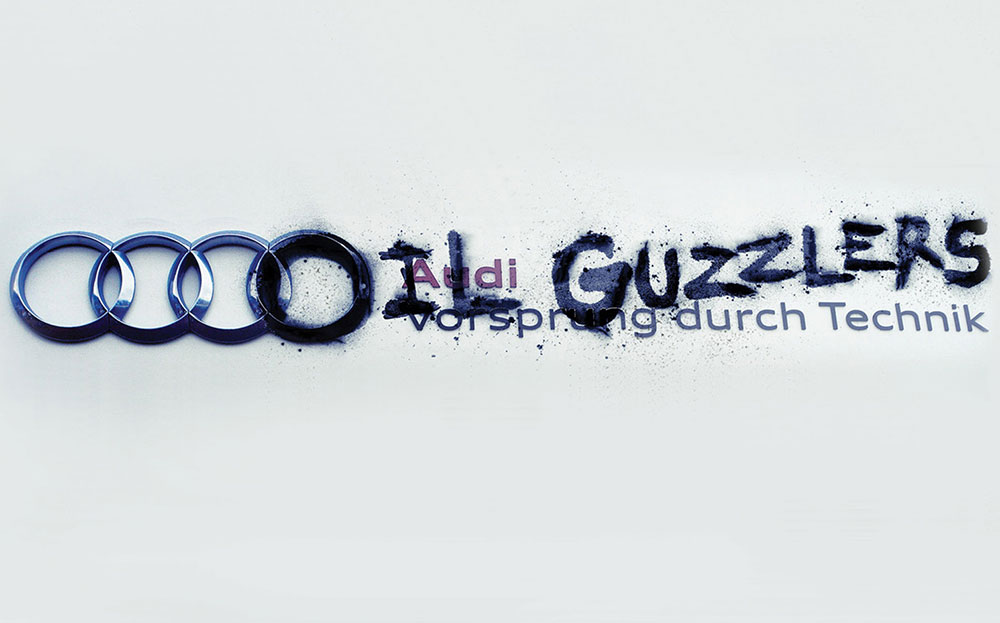 IN MAY 2010, the car to have for a successful Los Angeles estate agent was an Audi A5. Smart and economical, it was just the model for Ara Der Sarkissian to use when driving between properties in the Hollywood Hills.

“It was new and I liked the looks,” says Der Sarkissian, 43. “It was navy blue — the perfect car — and it wasn’t cheap so I was expecting good treatment. I thought that I’d be looked after but there were problems right away. I was opening the hood and topping up with oil almost every 1,000 miles.”

Dissatisfied, Der Sarkissian sued Audi for damages. The case was joined to those of other claimants who similarly had found themselves frequently having to top up the oil in their Audis. It became a class action — a case brought by a group of litigants with the same complaint.

Earlier this year, Audi agreed a settlement and Der Sarkissian was awarded $2,500 (£1,600), as were other lead claimants in the case. He won’t be using it as a deposit for another Audi. “I’m done with them,” he says. “I’m not a fan of their engineering any more.”

The case highlights the difference between how American consumers can seek redress from car makers compared with those in Britain. Thanks to American laws, the class action did not just benefit Der Sarkissian and his fellow claimants. It also opened the floodgates for every other US Audi owner with the same, problematic, 2-litre petrol engine built between 2008 and 2011. Each one was identified by Audi and contacted. Unless they took a decision to opt out and try to pursue their own legal action, they too were entitled to have their car fixed free of charge by the company, or — if they had already paid for the repair themselves — a refund.

“If you have had the issue repaired, they will reimburse you,” says Hovanes Margarian, Der Sarkissian’s lawyer. “If you have not had it addressed, then they will make the necessary repair. Audi does not have the option of saying, ‘No, your car is fine’.

“We have a two-sided system. It protects the consumer and helps the manufacturers get a blanket settlement, reducing legal fees. Sometimes I wonder if we did not have this, what would companies try to get away with?”

Things are very different in Britain. Reports have been swirling for years that a similar problem of excessive oil consumption affects Audis here but disgruntled owners have been tackling the issue on their own. The company admits that some cars suffer a problem, but despite mounting evidence that thousands of cars are affected, it has committed only to assess each customer on a case-by-case basis. Owners are asked to take their cars to a dealer for tests before Audi will pay up.

The company admits that some cars suffer a problem, but despite mounting evidence that thousands of cars are affected, it has committed only to assess each customer on a case-by-case basis

David Garwood, 31, a fireman from Yateley, Hampshire, bought his 2½-year-old Audi A5 in 2013 for £18,000 but it wasn’t until six months later — when it was three weeks out of warranty — that he realised there was a problem.

“I’d had to top it up with oil but hadn’t driven it very much so I hadn’t realised how much it was consuming,” he says. “When I realised it was burning a litre bottle every 400-500 miles, I took it into the dealer. They told me that, because it was out of warranty, I’d have to pay £6,000 to have it fixed. I couldn’t believe it. After a lot of arguing, the manager took me into his office and said I’d have to pay £1,500 — take it or leave it, so of course, I paid.”

Earlier this year, after the American class action was launched and talk of the problems with Audi’s cars appeared on the internet, Garwood realised that other drivers with the same issue were having their cars repaired free of charge. “I was furious,” he says. “My car only had 30,000 miles on the clock and a full service history. I looked at online forums and realised some people were getting free repairs even though their cars didn’t have a full service history, or they had 100,000 miles on the clock. Others were paying to have their car repaired when they had taken it to an Audi garage for all of its life. It was all inconsistent.”

Garwood then embarked on another round of pleading with his dealership and after an estimated 10 hours in the showroom and five hours on the phone since he had bought the car, the repair cost was refunded — although he still had to pay £300 to have the problem diagnosed. He’s now happy with the car and the dealer but cannot understand why the systems in America and Britain are so different.

Kevin Timms, a solicitor with the law firm Irwin Mitchell, says that new class-action rules introduced in Britain this month now mean British consumers have access to US-style justice — but only for cases where companies are accused of being anti-competitive, not for faulty products. “If legislation was created to widen the scope for class actions and not have them limited to anti-competitive issues I think that would increase access to justice for a number of consumers,” he says.

The biggest international scandals of recent years have been uncovered by US authorities: Toyotas allegedly accelerating of their own volition, airbags made by Takata exploding shrapnel into drivers’ faces, and Volkswagen’s diesel embarrassment

But the current British legal system has built-in defences to deter a US-style litigation culture that results in huge billboards for ambulance-chasing lawyers plastered along highways, urging anyone with a complaint to take action. In 2007 the Washington court system even allowed a man to mount a $54m claim against a dry cleaner for losing a pair of trousers from a $1,000 suit. He eventually lost.

It is not just angry customers that US companies have to fear. Safety and air-quality defects are taken even more seriously. The biggest international scandals of recent years have been uncovered by US authorities: Toyotas allegedly accelerating of their own volition, airbags made by Takata exploding shrapnel into drivers’ faces, and Volkswagen’s diesel embarrassment.

The National Highway Traffic Safety Administration has powers to investigate potential safety issues, to demand information from car makers and to force recalls.

In contrast, the Driver and Vehicle Standards Agency (DVSA), which oversees recalls in Britain, does not carry out its own investigations and has never ordered the recall of a model or fined a manufacturer.

A spokesman said that it had a co-operative relationship with car manufacturers and that this kept British drivers safe. Its website allows drivers to report safety defects with cars, which can trigger an investigation by the vehicle manufacturer. In the past 15 years, the DVSA says that a quarter of all British recalls have been as a result of problems initially identified by its reporting system.

Some customers would prefer the American-style combination of strong consumer law and watchdogs with sharp teeth. Ravi Beefnah, 35, a care home manager from Colchester, Essex, found himself having to top up the oil in his Audi A5 by a litre every time he filled up with fuel, costing up to £20 a time. When he couldn’t get redress from his Audi dealer in Chelmsford, he took matters into his own hands. 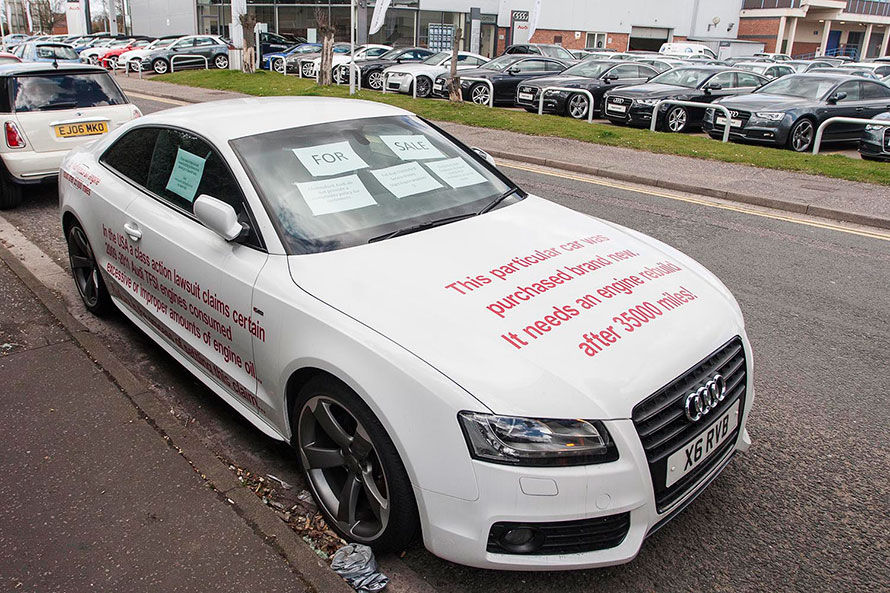 In April, after two months of haggling, he parked the car outside the dealer, blanketed with red slogans, including: “This particular car was purchased brand new. It needs an engine build after 35,000 miles.” He refused to move it until the car was fixed.

“It was parked there for six months in total,” says Beefnah, although some of this was because of delays in the exchange of letters between his and Audi’s solicitors. “I haven’t got the car any more and the situation’s been resolved. I can’t believe that I had to do what I did to get it all sorted out.”

In response to The Sunday Times’s questions, Audi issued a statement. “Audi UK is offering a comprehensive resolution for cases emerging outside our UK-specific three-year warranty period,” the company says. “Every case is assessed individually, but in instances where the vehicle in question has been serviced and maintained in accordance with our owner’s handbook the necessary remedial work will be carried out at no cost to the customer.”