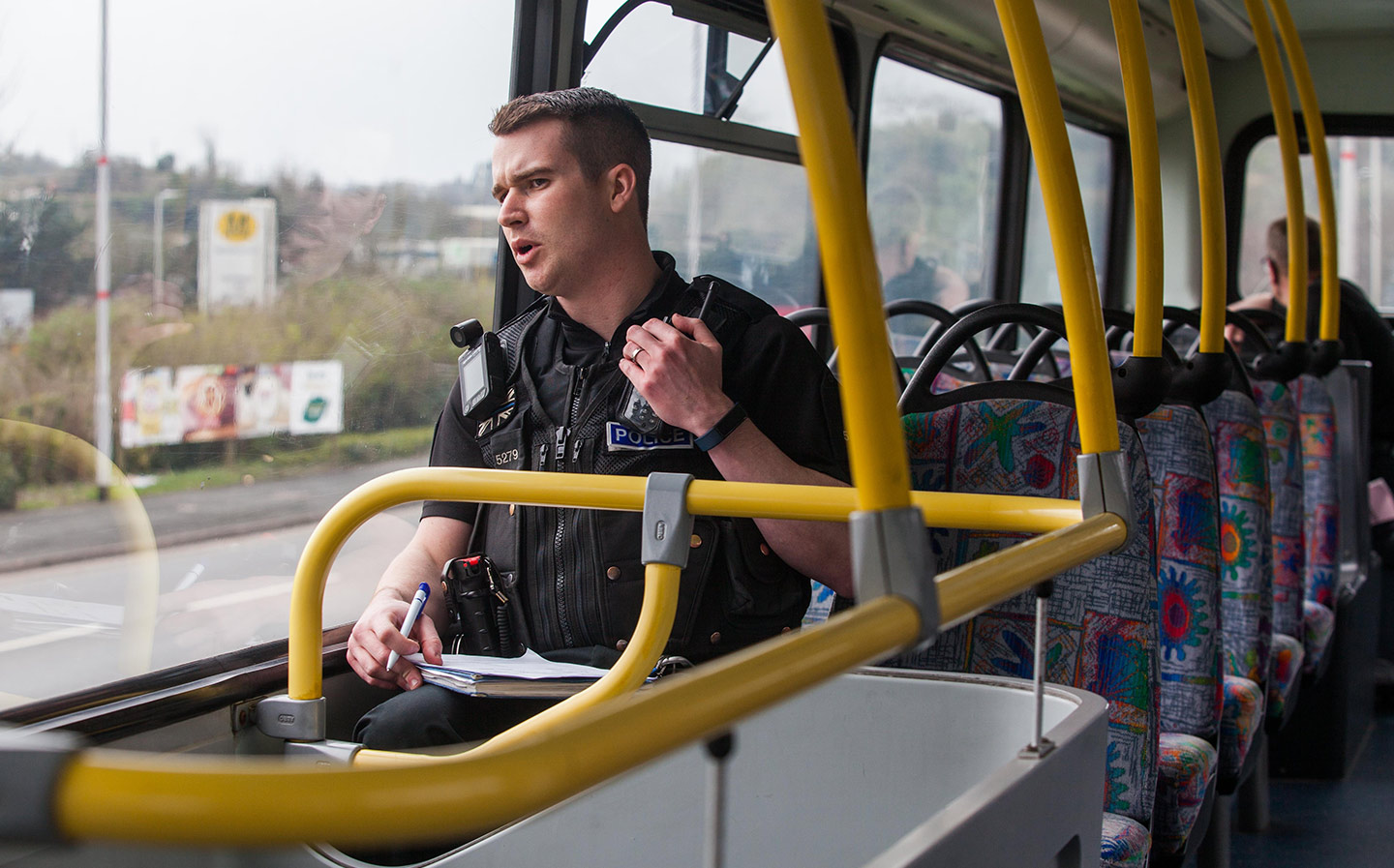 POLICE have fined dozens of drivers after commandeering a double-decker bus to spot them using their mobile phones.

Officers kept an eagle eye from the top deck and liaised with other officers in unmarked cars who followed behind to pull offenders over. They caught more than 130 motorists over two days in Plymouth, Devon.

In addition to 39 drivers fined for using their mobile telephones, 36 were pulled over for not wearing a seat belt and two vehicles were seized for not having insurance.

A further 53 drivers were reported for speeding and two more were arrested for driving under the influence of drugs.

In what is believed to be the first time police have used a double-decker to keep an eye on motorists, officers from Devon and Cornwall Police took over a red Citybus to give them a birds’ eye view. Few motorists appeared to notice that they were being watched.

Colleagues in patrol cars or on motorbikes handed out on-the-spot fines and points for those who did not wish to go to court to contest the charges. The penalty for using a mobile at the wheel doubled to a £200 fine with a six-point endorsement on March 1 — but many drivers who were caught out seemed to be unaware of the changes.

One motorist was spotted texting for ten seconds by one officer in Plymouth city centre.

The crackdown was hailed as a success by the force. PC Andy Llewellyn said: “The double-decker bus is great to catch people looking down on their laps using phones. This is a great example of how we can maximise policing resources by working closely with partner organisations in the community.

“Careless and inconsiderate driving is something that people may not recognise as a fatal factor.”

Inspector Rob Scott said: “The temptation [to look at a phone] can be too great especially while stationary at traffic lights. People always want to know what’s going on — they will look at social media, texts.”

PC Llewellyn added: “With someone in the traffic looking down on their lap, it can be very difficult to catch them unless you actually see the device.” He added that Derbyshire Police had expressed an interest in trying a similar initiative.

Mark Horide, a Citybus spokesman, said: “We will be doing it again. We support any police initiative that addresses personal safety.

“Our drivers report back on a regular basis to say they see people on their mobile phones while driving.”

The initiative follows the success of the No Excuse education and enforcement campaign launched by Dorset Police in 2010, cracking down on drivers who were distracted by mobile devices. It deployed extra officers to areas of concern and won a Prince Michael International Road Safety award. Officers from Dorset have been advising Devon and Cornwall Police.

Fiddling with any kind of mobile device, including a satnav, is illegal while driving a vehicle.

Although it is not illegal to talk on a hands-free mobile, dialling a number or selecting a music track to listen to is.

You can also be prosecuted if you are not in proper control of the vehicle, (because for example, you are eating a banana, reading a map, drinking a coffee or putting on your lipstick) and if your number plate is too dirty.

If your children, or your pets, distract you while driving you can also be deemed not in proper control and face a fine of £1,000 and three points.