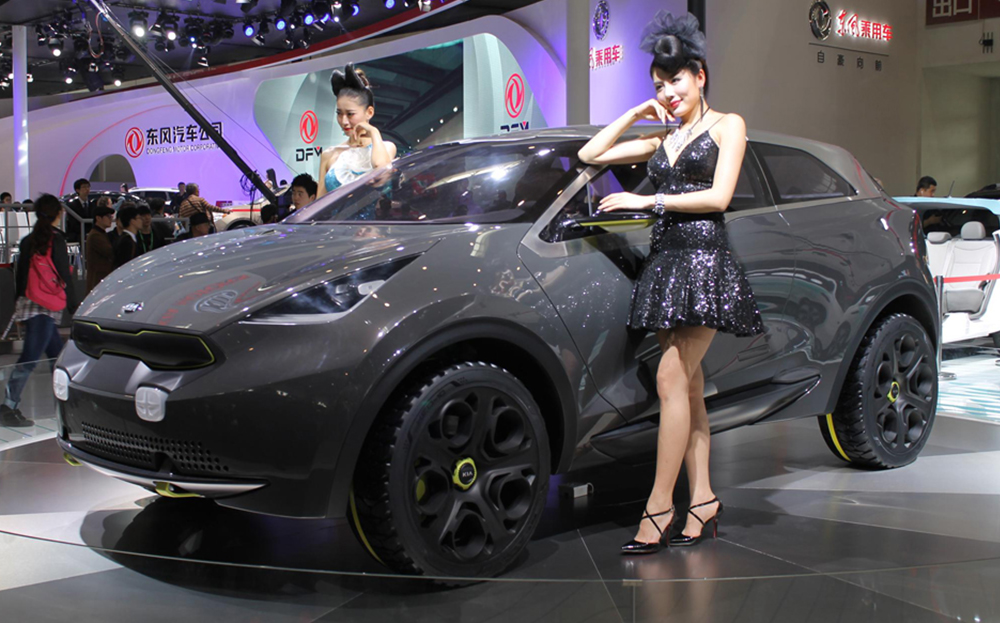 FOR EVEN the most seasoned show-goer,  the Beijing motor show, known locally as Auto China and the premier show in the capital city of what is now the largest car market on earth, is tough. From the moment you realise you’ll never reach the vast halls unless you get out of your taxi and walk, it’s a place where everything is more difficult than it needs to be.

This year we were spared the choking smog that penetrated the halls of the biennial show in 2012, but despite its size and global significance we were still confronted by roped-off stands and an absence of information and spokespeople. As for the legion of domestic manufacturers, they seemed as startled to see us turn up on their stands as they had two years ago.

If there was a star of the show, I’d pin it on the VW Group for both the Audi TT offroad and Volkswagen Golf R 400 concepts. The TT was more interesting because it marks the moment Audi realised those two capital letters have been wasted identifying a mere car, when they could identify an entire sub-brand. 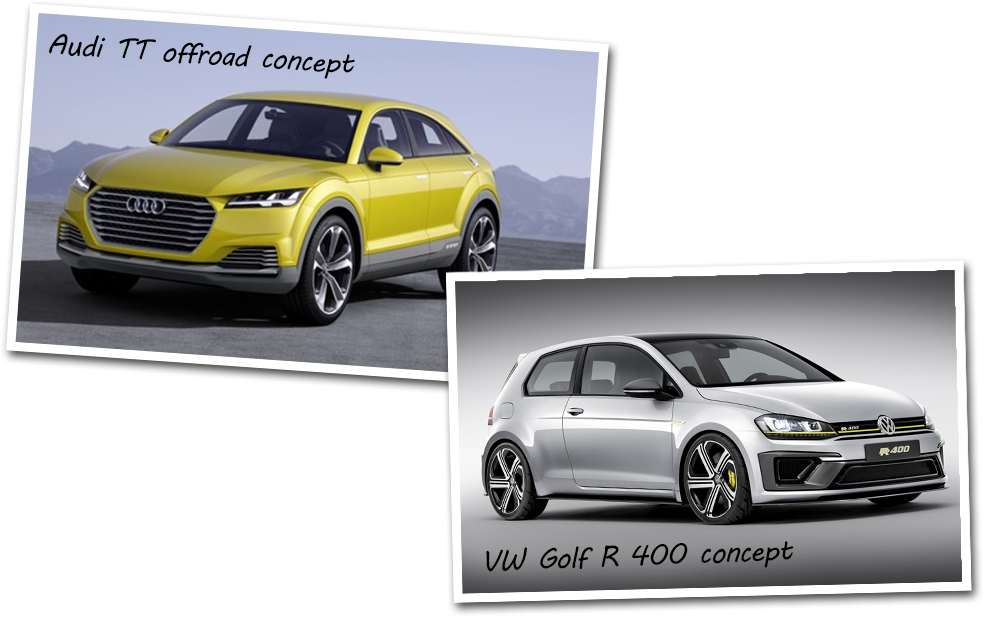 The approach has worked spectacularly well for Land Rover with its Range Rover offshoot so, in time, expect an entire family of sporting TTs to pander to the whim of any buyer who’d buy a TT coupé or convertible if only it could be made to fit their lives. Now and increasingly, it will.

Buy your next car on driving.co.uk – click here to browse our quality used vehicles

As for the VW Golf R 400 concept there’s no guarantee it’ll even go into limited production but even so, I love the idea of a 396bhp Golf that’ll hit 62mph in 3.9sec arriving on the occasion of the 40th birthday of the most sensible hatchback in history.

Preferring to keep major model reveals for the longer-established shows, BMW and Mercedes-Benz also brought concepts to the show. There was much food for thought in the sweeping lines of BMW’s Vision Future Luxury Concept. 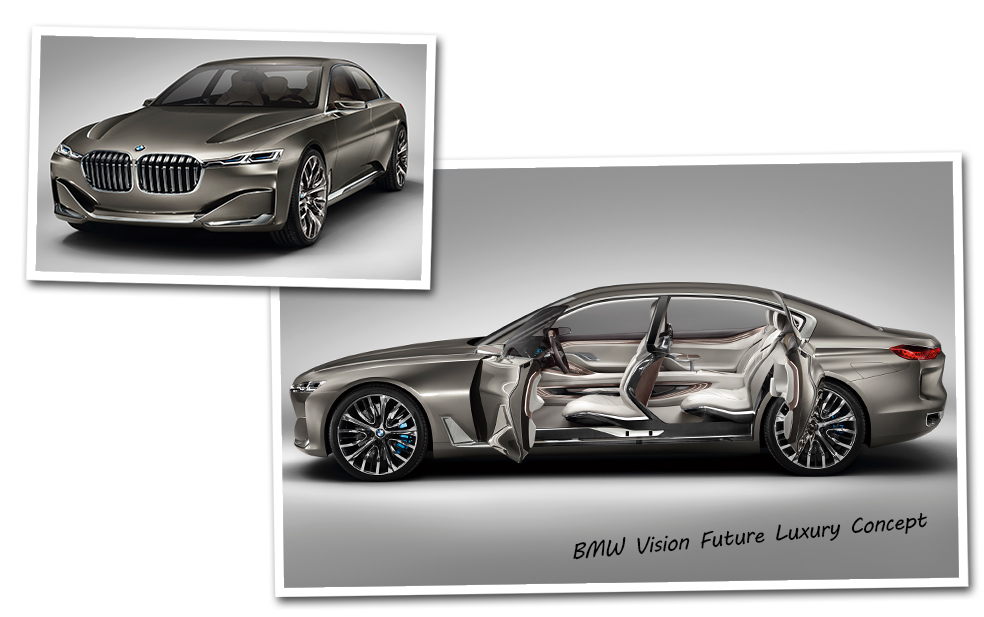 Though the car maker claims it simply indicates the way it is thinking about the meaning of luxury, in truth the Vision Future Luxury Concept provides a strong clue to the design direction (if not the actual shape) of the all-new 7-series that we’ll see next year. BMW acknowledges that even a massed produced luxury saloon now needs to be something a little more than a different size of essentially the same shoe offered to middle-order executives, thus raising the prospect of a genuinely fresh and different Seven.

As for the Mercedes-Benz Concept Coupé SUV, it looks like the car maker’s attempt to out-X6 the BMW X6 right up to, and including, looks as likely to repel as attract. Think of it as payback for BMW producing its own take on Mercedes’ ultra-successful CLS, in the form of the 6-series Gran Coupé. It will be turned into the Mercedes MLC-class, and go on sale next year. 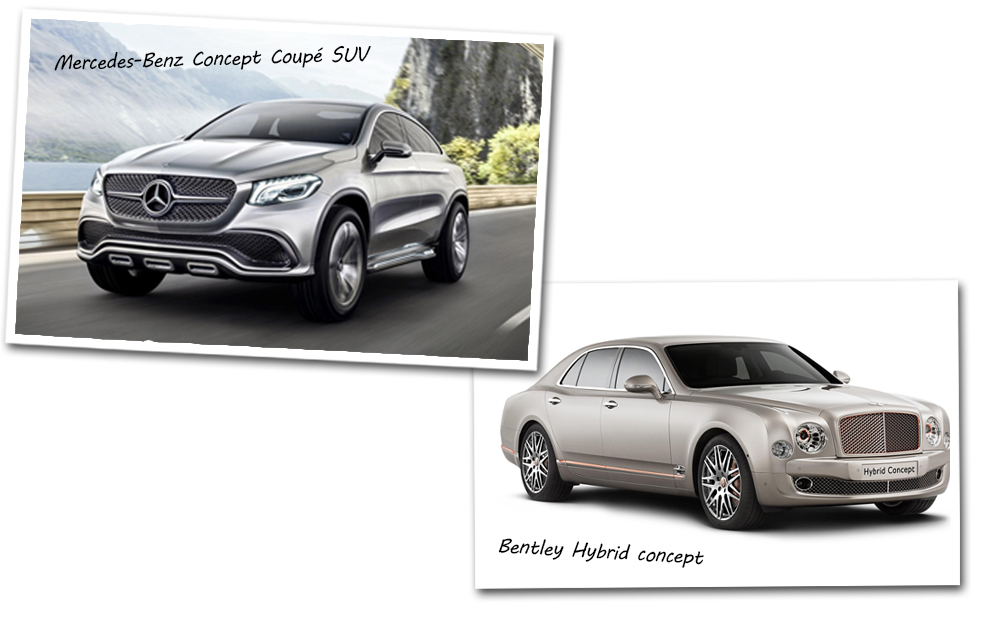 The Brits had nothing significant to show that had not already been seen before save, if you like, Bentley’s Mulsanne Hybrid Concept, the first even partly electrified car to wear the winged “B”. It’s not going into production, at least not any time soon, as Bentley has already announced its first hybrid (and first diesel) powertrains will be seen in the forthcoming SUV, due to go on sale in 2017.

In the absence of a strong British showing, it was left to the French to attempt to steal the show from under the noses of the Germans. The strikingly sporting Peugeot Exalt five-door coupé concept was perhaps the single most visually arresting sight of the show from a major manufacturer. It also brought the Peugeot 2008 DKR with which it will attempt to follow-up its triumph in last year’s Pikes Peak International Hill Climb with victory on the 2015 Dakar Rally. 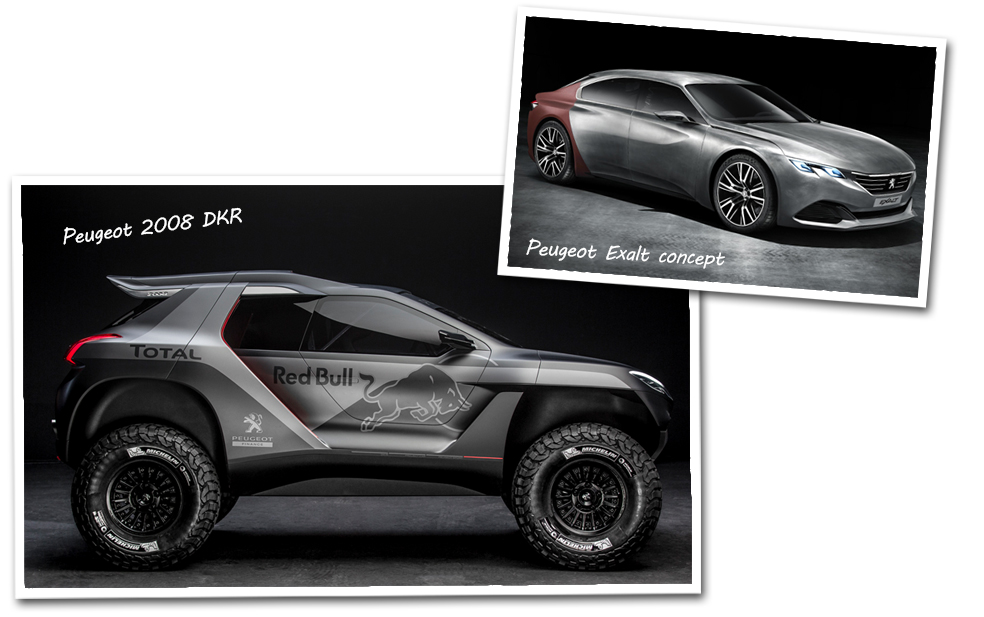 As for Citroën, the interest in its otherwise convincing offers – the DS5-based Citroën DS 6WR SUV and a deft, small SUV called Citroën C-XR – was diluted by the fact that neither is scheduled to be sold in the UK or Europe any time soon. It’s not that Citroën doesn’t want them here, you understand; the issue is with the parlous state of it and its parent company PSA. 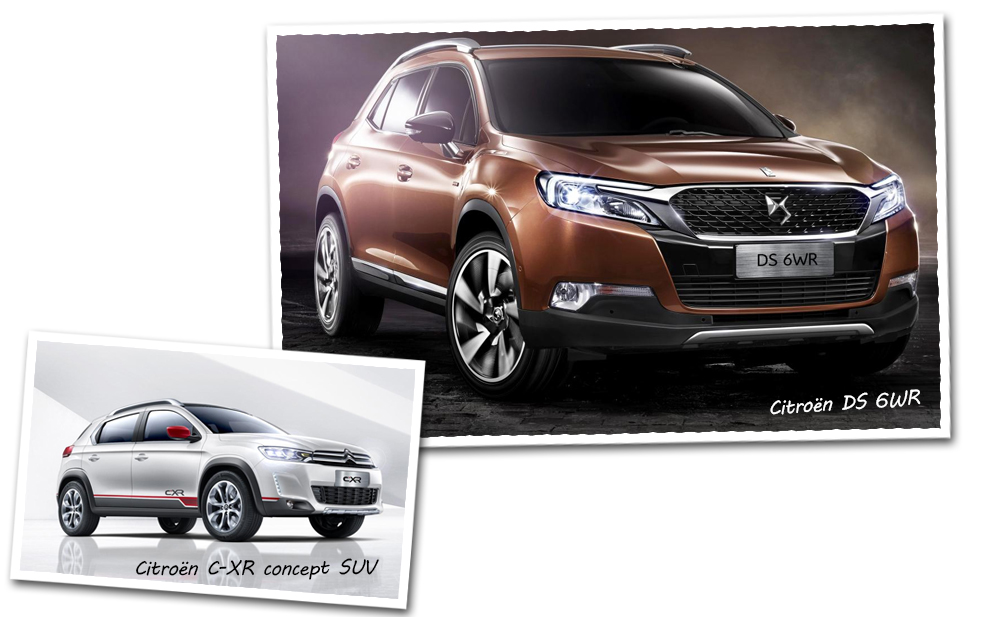 It means that for now, cars built in China have to stay in China. Why? Simply that for Citroën, at least, it is China and not France that is now the brand’s largest single market in the world.

As for China’s domestic manufacturers, there was little or nothing to suggest they yet possess either the will, or the way, to produce cars that would sell in significant quantities in developed markets beyond their country’s borders at anything other than a bargain basement price. 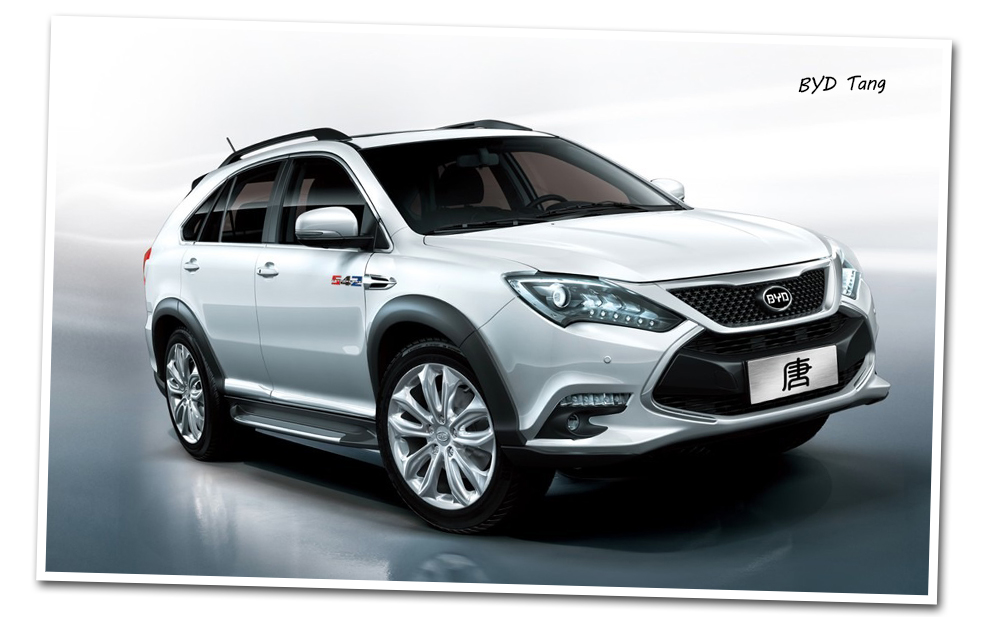 This is why every major Chinese constructor has entered into major joint-venture arrangements with the established global players. Probably the most convincing was BYD’s (Build Your Dreams) Tang, a car with a silly name but a serious specification including a 2-litre turbo hybrid powertrain developing 348bhp and capable of propelling the full-size SUV to 62mph in a Cayenne-bashing 5 seconds flat.

In the end, though, it wasn’t difficult to see what this show lacked: new cars that people outside China could soon be able to buy. The show was awash with domestic product and ambitious international concepts, but almost nothing that was both real and directly relevant.

Of the familiar names, only Lexus chose to unveil a completed major new product. Its mid-size Lexus NX SUV garnered a level of attention it might have struggled to attract in Paris, Frankfurt or Detroit. It’s a dramatically-styled off-roader, set to go on sale in the UK with hybrid power by the end of the year. 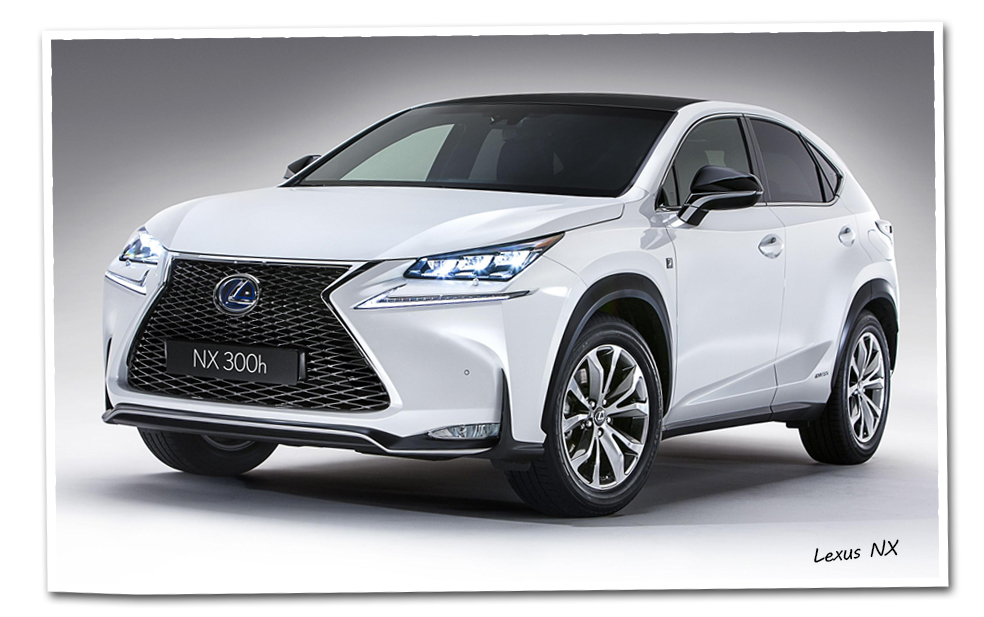 Even so, Auto China is only going to grow both in stature and significance, and in line with China’s status as the number one car market in the world. In 2016, when it should be up to 20% per cent larger even than it is now, we’ll be back, despite the traffic, the smog and the struggle to find out what you need to know.

Much as we might like to at times, this is not a show it is possible to ignore.

Buy your next car on driving.co.uk – click here to browse our quality used vehicles