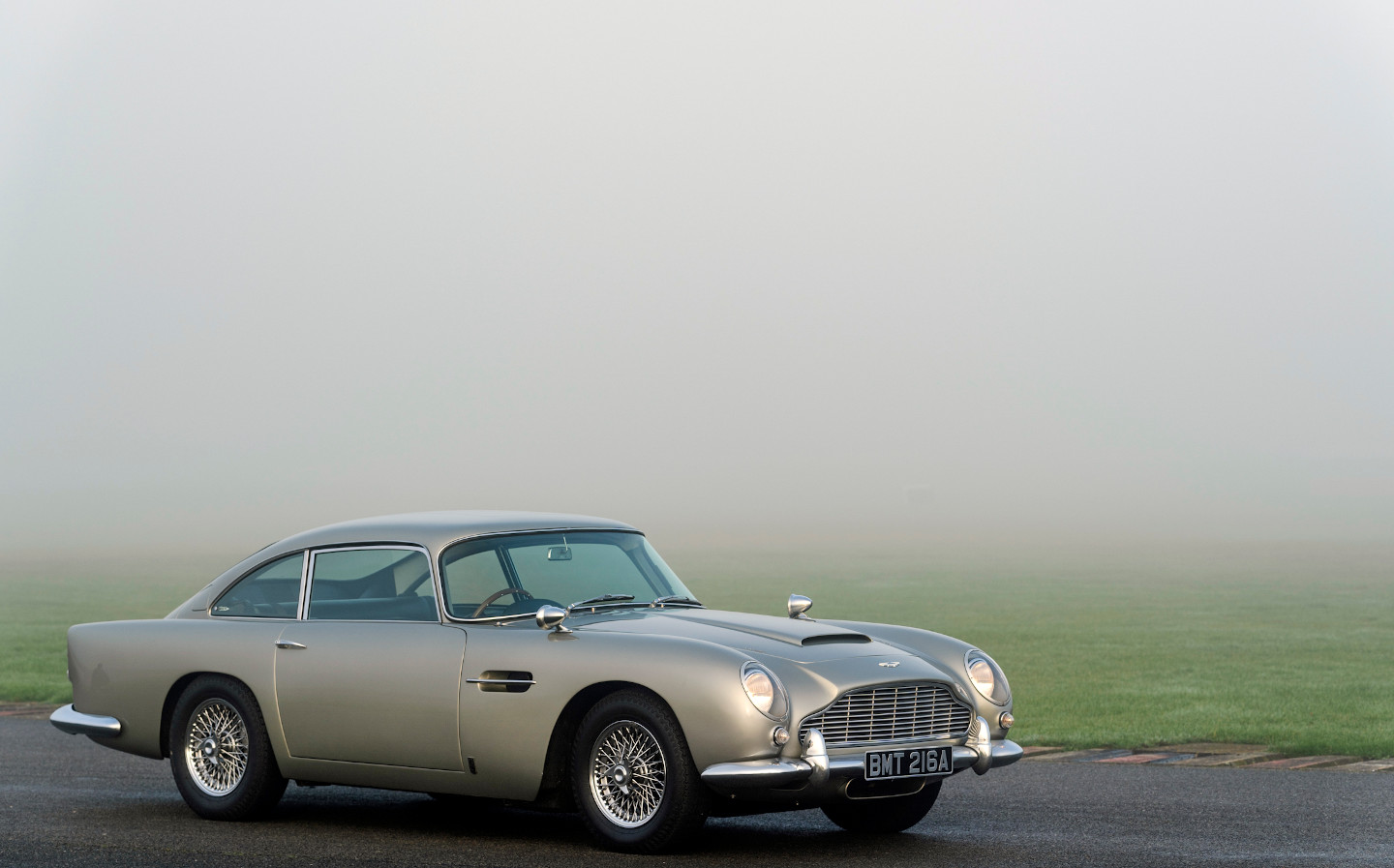 THERE IS a moment in 1964’s Goldfinger where James Bond’s Aston Martin DB5, being escorted by henchmen between two menacing Mercedes, springs to life. Flipping open the gearstick and pushing a red button, 007 sends his bad guy passenger flying into the air via the Q Branch’s famous ejector seat (“You’re joking?”), and he flees, grinning impishly while pursued by the fearsome Oddjob.

Aston Martin is now recreating 25 of the Connery-era DB5s, complete with spy-level enhancements. The company is going to incredible lengths to ensure the similarity of the models to the ones produced in the ‘60s, including using the same production facility in Newport Pagnell that produced the originals, the same Silver Birch paint, leather identical in colour and texture in the interior, and keeping the dashboard and instruments as similar as possible.

Chris Corbould, the Oscar-winning special effects supervisor on the current Bond films, has even been brought in to oversee the reproduction.

In order to give an air of danger befitting a car used by her majesty’s secret service, Aston has also given the 25 models the Q-branch treatment, decking them out with revolving number plates, battering rams, machine guns (which, it goes with saying, are simulated), an oil slick delivery system and smoke screen. Unfortunately owners won’t be able to produce the ejector seat scene, however, as Aston is stopping short of including such a dangerous feature.

Due to Aston Martin’s faithfulness to replicating the original, which hasn’t been produced in nearly 55 years, as well as incorporating an arsenal of gadgets, none of the 25 replicas will be road-legal. The guns don’t fire, and the “oil slick” the car releases will not have an effect on any oncoming cars, but the car nevertheless has been deemed too dangerous by modern road safety standards.

The DB5 Goldfinger Continuation models will feature authentic functioning gadgets including revolving number plates, machine guns, and smoke screen – all of which can be controlled from the cabin or via remote control!#astonmartIN #MakeEveryDriveCount #DB5 pic.twitter.com/AqkoQT5zwh

Despite this, and the car’s £3.3m price tag, all of the DB5 Continuations are now sold out. However, as the New York Times pointed out in its coverage, this is a steal compared to the real thing — the car driven by Sean Connery in Goldfinger sold for nearly $6.4m (£5.24m) at an auction in California last year.

Corbould said that the challenges of incorporating all the tech into one car was the main challenge of his role in the reproduction:

He also admitted that incorporating some of the more theatrical gadgets also took a bit of imagination: “The guns appearing from the front lights were a particular challenge as, in the film world, we are able to use flammable gas mixtures combined with an ignition system to produce a flame and noise effect. Clearly this is not practical in untrained hands, so we have devised a new system to achieve a realistic effect.”

In terms of its mechanical assets, the DB5 uses a naturally aspirated, 4.0-litre straight six engine, located at the front of the car. It can muster 345bhp, getting the car from 0 to 60mph in 7.1 seconds — not to be scoffed at, even half a century after it exited production. More modern additions include sat-nav (an inclusion that seems to rub salt into the not-road-legal wound) and a remote control to control the myriad gadgets.

The project comes after the success of the DB4 GT Continuation in 2017, as well as that of the DB4 Zagato Continuation last year. It joins similar projects by other British Marques: Jaguar reproduced the “lost nine” XKSS models that were lost in a factory fire back in 1957 back in 2016 – each model took over 10,000 hours to make, according to Jaguar, and cost in excess of £1m each. Land Rover did a similar thing with the Series 1, reproducing the production line from the 1940’s back in 2015.

The DB5 is now a car as attached to James Bond as it is to Aston Martin, with the car set to make its eighth appearance in No Time to Die when it (finally) releases later this year. The DB5 will be joined by three other Aston Martin models — the V8 Vantage (which also appeared in 1987’s The Living Daylights), the DBS Superleggera, and the as-yet-unreleased Valhalla.

Aston Martin wouldn’t reveal to The Times who the cars had been sold to, but the paper noted that Sean Connery, James Bond himself, revealed that he had purchased a DB5 last year…