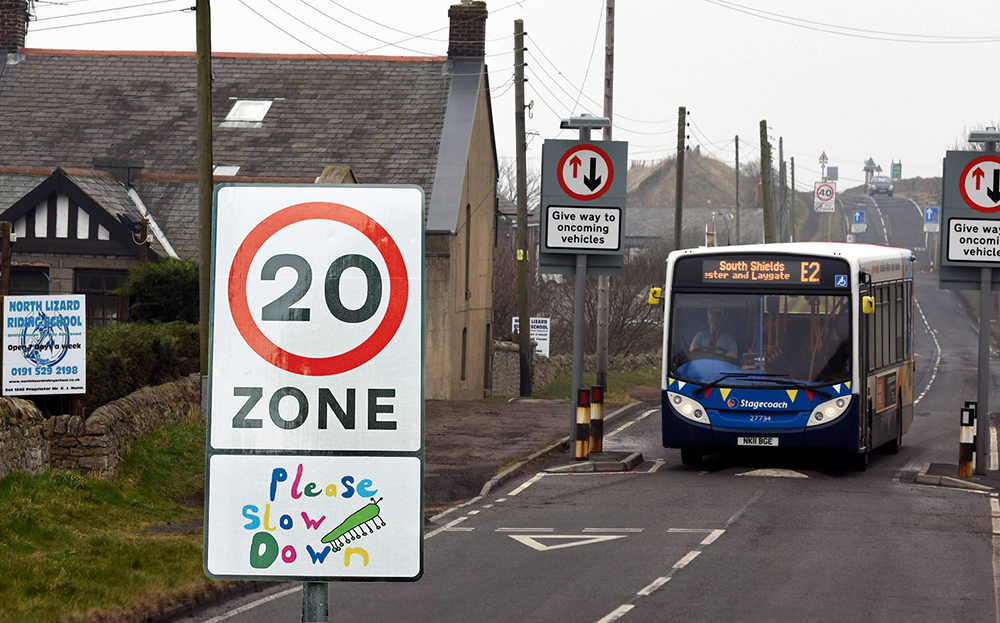 LIZARD LANE is a pretty, rural road, lined by stone walls as it heads from South Shields towards Sunderland. It rises up a gentle hill, giving drivers a good view of the sea. And they have plenty of time to take it in.

Just over a decade ago, cars zipped along the road at 60mph.  Today the limit is 20mph. Like thousands  of other roads across the country, Lizard Lane has been reclassified by the local authority that manages it.

South Tyneside council says the change is to improve safety, but some drivers, along with motoring organisations, complain that this type of reclassification is slowing journey times and causing congestion — and that is being done without the millions of road users it affects nationally having a say.

“Blanket 20mph speed limits risk being widely disregarded by drivers who don’t see why they are necessary,” warns Kevin Delaney, head of road  safety at the Institute of Advanced Motorists. “We support the use of 20mph limits where there is evidence that the risk of casualties will be reduced, but there has been very little research into this.”

He says drivers should be consulted. “These schemes need to be introduced in an open and honest way where the wider benefits are shown.”

Lizard Lane is one of more than 20,000  roads in Britain that have been converted to a 20mph limit in the past few years

New research by The Sunday Times reveals that Lizard Lane is one of more than 20,000  roads in Britain that have been converted to a 20mph limit in the past few years. The effect on journey times and on safety is unquantified, and that, motoring groups say, is part of the problem. Dozens of councils are taking the decision to recategorise roads  without proper evidence or a national plan, they claim.

The Sunday Times sent freedom of information requests to 207 highways authorities in Britain. Of the 172 that replied, 74% said that within the past two years they had reduced the speed limit on roads in their area to 20mph. In Cardiff 195 roads were downgraded to 20mph last year at the start of a two-year trial to see whether it should be extended across the city.  Wigan council has reduced limits to 20mph on 5,312 streets  over the past two years.

Reclassification is not confined to urban areas. The lower speeds have spread even to the Scottish Highlands, where 63 roads have had limits cut to 20mph. Bath and North East Somerset council imposed 20mph limits on more than 1,000 roads after successful campaigns by villages to have streets reclassified.

The rapid expansion of the zones has led to more drivers being fined. Until recently police said that enforcing the limit on 20mph roads was not a priority, but that attitude is changing. In October last year police in Islington, north London, began setting up mobile speed cameras and issuing tickets to speeding drivers. Councils say they are doing it to make roads safer. 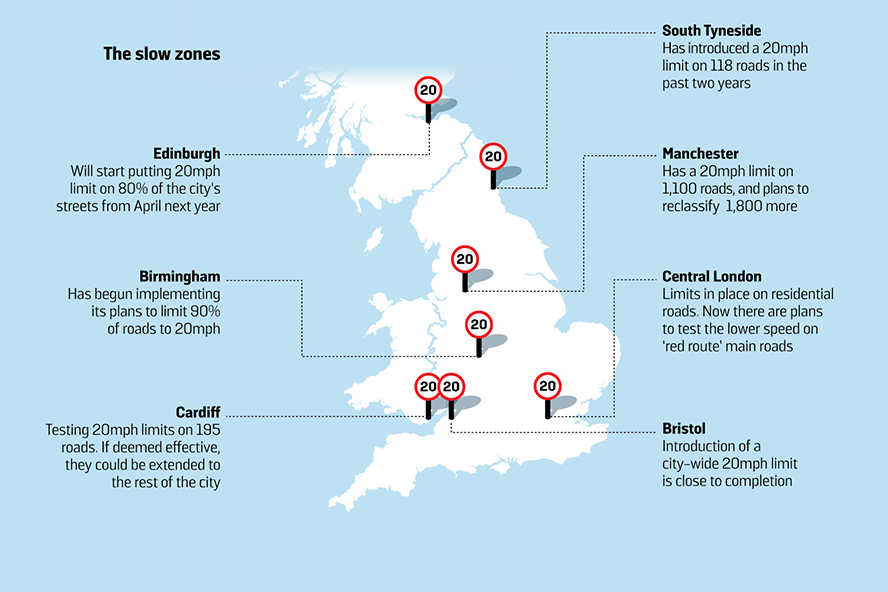 They argue that lower limits cut the average speed of traffic, so that vehicles are more likely to be able to stop in time to avoid an accident. And even if they do collide with other cars, cyclists or pedestrians, the victims are less likely to sustain serious injuries.

Since local authorities were made responsible for improving public health by the Health and Social Care Act 2012, some council safety officials have seen lower speed limits as an easy way to improve their performance. Paul Butcher, director of public health at Calderdale council in West Yorkshire, is behind a plan to introduce 20mph zones in most residential areas within its boundaries, including in Halifax. He believes that lower limits will cut accidents, reduce pollution and improve fitness by encouraging people to switch from driving to cycling and walking.

Given the gathering support, it might be surprising to learn that there is little evidence that the zones achieve what they are meant to. Last year the Department for Transport said some studies from Portsmouth and Bristol “indicate potential benefits [of 20mph zones] … [but] the evidence from these studies is inconclusive”. It has commissioned a review but this will not report until 2017.

In 2010 a government-commissioned study of Portsmouth’s 20mph scheme found no evidence that road casualties had declined faster than the national average.

Early schemes were designed with speed bumps and width restrictors to persuade drivers to stick to 20mph. But as 20mph zones become more widespread, speed cameras are being introduced. One speed camera supplier has been active in sponsoring debate on the subject, including a conference attended by council delegates, where speakers called for 20mph to be the national default limit on built-up streets.

Vysionics, which makes Specs average-speed cameras, including the Specs3 Vector, which is designed for 20mph zones, had a stand at a conference called Time for 20mph earlier this year. The meeting was attended by more than 100 paying delegates from councils across Britain.

“We are interested in using average speed cameras in 20mph zones in future,” said Timo Thornton, an account manager at Vysionics, who was manning the stand. “We think this is ideal because it means you don’t need to put in speed bumps or chicanes, which can be a problem for the emergency services.

One speed camera supplier has been active in sponsoring debate on the subject, including a conference attended by council delegates, where speakers called for 20mph to be the national default limit on built-up streets

“None of the councils has contacted us formally yet, but we are hoping to get involved with [20mph zones]. This is why we are involved and why we sponsored the conference.”

The issue has split residents and motorists. Those who live near routes that have been reclassified welcome the reduction in speed, whereas many drivers who use the roads object. A survey last month for Sustrans, a charity that promotes travel by foot, bike and public transport, found that 56% of parents wanted their school run to be on roads in 20mph zones.

Drivers polled for the Institute of Advanced Motorists strongly agreed that the limit should be in force around schools: 94% said these areas should be a priority for the limit. But fewer than half backed a 20mph limit in any other area.

An AA survey last year found that 55% of the organisation’s members thought that they should be consulted before a 20mph zone was set up in their area. Only 41% thought that speed cameras should be used on such streets.

“Our members are clear in supporting targeted 20mph limits,” says Edmund King, president of the AA. “Blanket 20mph limits are counterproductive: you are creating more emissions by slowing traffic down and, frankly, if all the roads are at 20mph, then some drivers will think that they may as well use rat runs, which is obviously not appropriate.

“Certain authorities have got carried away. It may be because they think they are doing the right thing or because they just don’t like cars. The government should take more responsibility and look at the big picture to ensure that we have a network of roads for movement rather than potential gridlock across swathes of urban areas where essential traffic cannot get around efficiently.”

Back in Lizard Lane, the cars bounce over the speed bumps and tiptoe round chicanes installed at either end of the 20mph stretch. “It is quieter than it used to be,” says Bob Button, secretary of Whitburn golf club, which runs on either side of the road. “It’s easier for members to cross without cars screaming down on them at 60mph.

“Youngsters at the nearby riding school can walk their horses along the road with less chance of an accident.”

Maurice Kidney, 62, a lorry driver from South Shields, says: “Of course you need to drive carefully but people should be able to use their common sense; 20mph seems a bit extreme.”