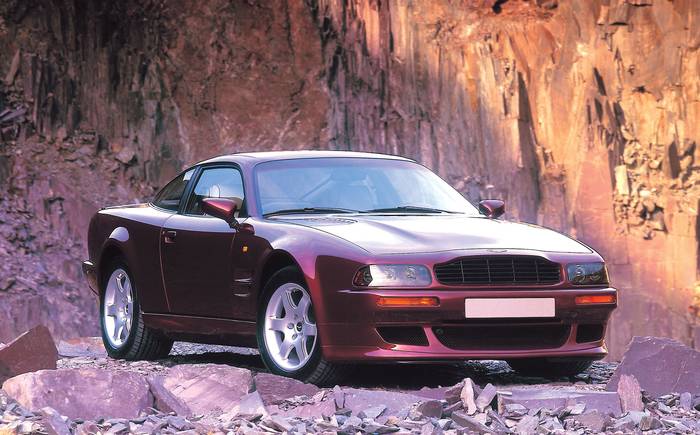 This article was first published in the Sunday Times in 1993

ON THE one hand, Aston Martin’s new Vantage is as brutal as a dockers’ boozer, yet, on the other, it’s a civilised as an EM Forster heroine. As a result, finding a target audience for the thing is hard.

When it’s just sitting there doing nothing, it looks like a big, silly old Hector, a throwback to the time when supercars had improbably large engines at the front, rear-wheel drive and bulgy bits everywhere else. It appears to be an anachronism and it doesn’t matter how many airbags or catalytic converters they say it has, it still looks a bit daft.

Inside, it’s like my old headmaster’s study. The doors aren’t lined with books, but they look as though they ought to be. The carpets are thick, the leather is plentiful and the wood was obviously carved by someone who knows, or is even married to, Mrs Dawson from the condom commercials. The people who make Aston Martins are what Tory politicians like to call “the salt of the earth”.

They are, however, craftsmen, and it shows. Even though Aston Martin is now owned by Ford and the interiors play host to a number of Ford bells and whistles, it is still a headmastery place to be. A sort of baronial hall with a ding-dong doorbell. But it’s the bit under the bonnet that matters most.

There’s a game going on at the moment with every Tom, Dick and Luigi claiming that they are about to launch the world’s fastest car. The instant Martin Brundle thumped a Jaguar XJ220 around the Nardo test track in Italy at 212mph and, as a result, put the car in the Guinness Book of  Records, Bugatti cleared its corporate throat and said its new EB110 had been timed on the same track at 212.5mph. Yah, boo, sucks. Now McLaren says its F1, a BMW-powered three-seater with a price tag of $1m, will do 220mph. And so it goes on.

Aston Martin, however, does not talk in superlatives about the Vantage, which is odd, because under the bonnet is the world’s most brutal engine. In a nutshell, the twin-supercharged 5.3-litre V8 is exactly 10 times more powerful than the motor in your Golf GTI. Nearly.

That pumped-up, puffed-out body may look silly in a crowded town centre where everyone wears shoes made out of eco-friendly potato skins, but show it an empty piece of road and it will rearrange all your internal organs. Zero to 60 takes less than four seconds.

Calling the performance explosive is like calling the space shuttle jolly clever. Unless your name is Ayrton Senna, you will not have felt, or heard, anything like it in your life before. At 2000rpm it is breaking windows. At 4000rpm your ears begin to bleed. At 6500rpm people from the noise abatement society come round and give you a summons. When you change from second to third at 92mph, the rear wheels will, if you want, burn rubber. Oddly, though, at 80mph in sixth gear, the engine is ticking over at a mere 1500rpm.

When you learn it can do all these things, and more, its exterior styling starts to make sense. If, in Terminator, Arnie had been nibbled to death by a field mouse, nobody would have bothered going to see Terminator 2. The aesthetics must always be matched by the power.

The most surefire way of feeling stupid is to drive a car that looks as though it will go quickly when, in fact, it would have the devil’s own job passing a dilapidated milk float. People laugh at you, and rightly so. The Aston Martin writes out cheques that its body can cash, which is undoubtedly a good thing.

Cars these days have become an outer set of clothes, the only clue that passers-by have about what sort of person you are. This is why hairdressers, as often as not, drive around in a Mazda MX-5.

You wouldn’t, or shouldn’t, go out shopping in an Armani two-piece if your belly is so big that it looks as though you’ve got a space hopper down the front of your shirt. On this basis, the Aston Martin Vantage is for those who are hung like a horse, have forearms like redwoods and boast a family tree that can be traced all the way back to a time when everyone was an amoeba. Oh, and you need to have £186,000 in the bank too.

IN A NUTSHELL: 1993 ASTON MARTIN VANTAGE