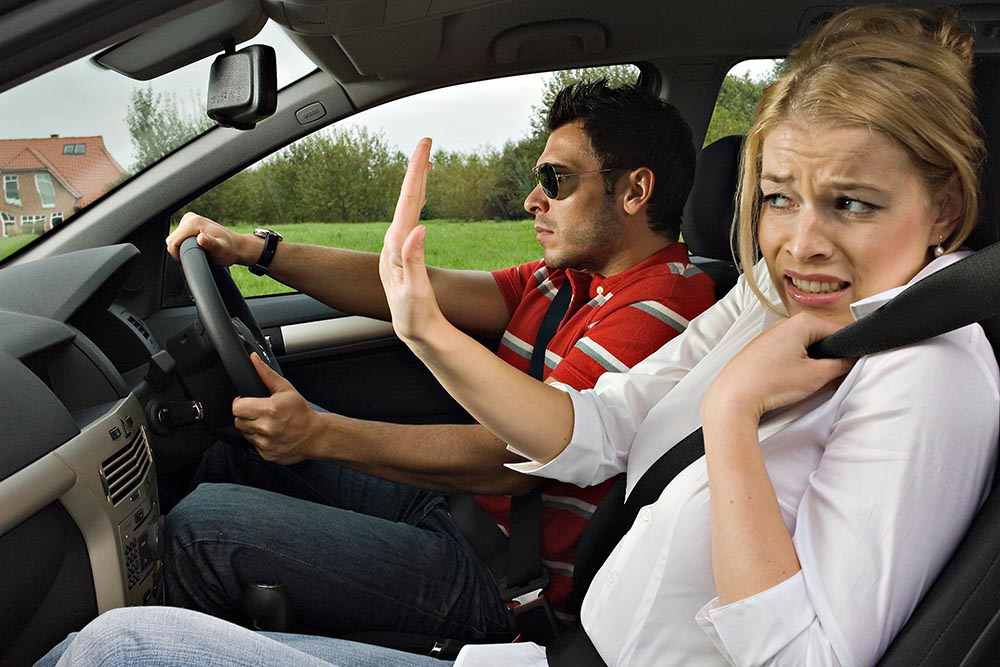 A NEW survey reveals what causes drivers the most stress and guess what – it’s their passengers, in particular close family and friends.

But passengers can be equally stressed out by drivers. We asked the Institute of Advanced Motorists to identify the 10 things that drivers do that annoy and frighten their passengers. The point was simple: if drivers know what rattles the person in the passenger seat, they might stop doing it.

Neil Greig, director of policy and research at the IAM, said: “Good drivers always consider their passengers’ comfort so if your friends start to make excuses when you offer them a lift, you know you have a problem. Parents also need to know that even the very young pick up their bad driving habits and if you speed, shout and bulldoze your way through traffic, your son and daughter will do the same.  Only they won’t have the experience you have to know when to draw the line.”

A tired driver: Yawning or nodding off while being in charge of one and a half tons of steel is a sure way to unsettle a passenger. Selfish drivers will plough manfully on, denying their situation, while more sensible ones will admit defeat and stop for a snooze, a stroll and a cup of strong coffee.

An irritable and impatient driver: There’s surely nothing worse than one of these. When they’re not punching the wheel and sounding their horn, they’re driving too close and too fast, blaming everyone but themselves for bad driving.

A late braker: Ever been a passenger and instinctively prodded your foot on an imaginary brake pedal? Meet the last of the late-brakers. They speed up to the car in front or to junctions and roundabouts as if they’re never going to stop, before jamming on the brakes.

An erratic driver: Speeding up then slowing down, dashing off one moment and dawdling the next, being observant one minute and then driving as if blindfolded. These are the signs of an erratic driver. If you’re in any doubt, just check how fiercely you’re gripping the seat. If you’re hanging from the grab handle, it’s time to get out.

A competitive driver: Every journey is a race for these drivers. A race to be first from the traffic lights, to overtake the car in front, and to beat the traffic with a clever short-cut that wins them a few extra car lengths. The worst undertake routinely and speed through amber lights. Our advice: wave the red flag and swap seats.

A nervous driver: They sit too close to the steering wheel and grip it too tightly. They make darting glances at the mirrors but otherwise stare straight ahead like their life depended on it. They utter squeaks of terror whenever another driver does something unusual such as indicating, and they operate the car’s controls like a road mender. They’ll turn your hair grey.

A distracted driver: On their own these drivers will merrily text and phone for hours at the wheel but now they’ve got a passenger (you) alongside them, a captive audience for their views on the state of the roads, the behaviour of other motorists and whether Ian Beale should give up the restaurant and abandon Walford for good. Stare ahead blankly and say nothing.

An inconsiderate driver: Closely related to competitive, irritable and erratic drivers, so definitely worth avoiding. Will think nothing of cutting up other road users, sneaking ahead of them when filtering from two lanes to one, and generally ignoring the common courtesies that allow the UK’s roads to run relatively smoothly.

A speeding driver: This one takes the biscuit with their cavalier attitude to your life. The signs are obvious enough (routinely breaking speed limits, running traffic lights, maxing the engine in all gears) but flashing blue lights is the one you’re praying for.

A lost driver: A lost driver very quickly turns into most of the above. So before getting into their car, ask them if they know where they’re going and how to get there. If necessary, invite them to draw an annotated map, or at the very least check they have more than a passing acquaintance with their car’s sat nav.