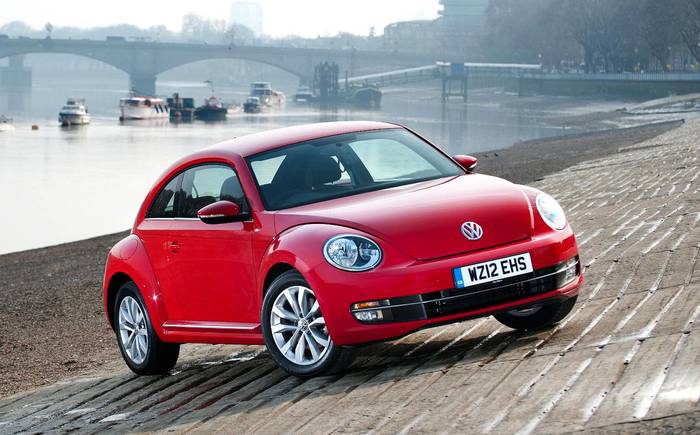 Enzo Ferrari once described the E-type Jaguar as the most beautiful car ever made. And even today, 51 years after it first sent a fizz down everyone’s trousers, you can still turn more heads by driving down the street in an E-type than you could if you rode into town on the back of a diplodocus.

The E-type has transcended fashion, and even Marilyn Monroe hasn’t been able to pull that one off. Back in the day she was considered to be the most beautiful woman in the world and she died before age wearied her. Today, though, most young boys would describe her as “a bit fat”.

Search for and buy a VW Beetle on driving.co.uk

Buildings? Nope. I guarantee that all of those über-modern, über-cool houses you see on Grand Designs will, in 20 years’ time, look absolutely ridiculous. As stupid then as a 1970s house looks now. But a hundred years after that they will all be listed and revered and people will come from Japan to photograph them.

Our taste changes constantly. Sunglasses have to be round. Then they don’t. Trousers are worn high. Then they are not. But through loon pants and punk and new Labour, the E-type has soldiered on, winning every single poll to find the best-looking car ever made. It was considered pretty at launch. It was still thought to be pretty when it went out of production. And it still causes people to swoon and faint today.

So it must have at least crossed the mind of Jaguar’s board to make next year’s F-type look like some kind of modern interpretation. An E-type with a 21st-century twist. But no. It’s not curvy or small. It doesn’t have especially pronounced haunches or an oval radiator grille. As I see it, there is not one single detail that’s been carried over, not a single nod of acknowledgment. And I think that is very, very weird.

The new car is good-looking, make no mistake about that. I don’t doubt it will be fast, and will oversteer so controllably that the helmsmen at Autocar magazine will be tempted to rub warm oils into the gentleman bag of its chassis engineer.

We hear that in terms of size it fits neatly between the Porsche Boxster and the 911. We hear that prices will start at around £55,000, that there’s a choice of V6 or V8 powerplant and that, while it will be launched as a convertible, a coupé is in the pipeline. It all sounds very well thought out and lovely.

But what in the name of all that’s holy caused Jaguar’s board to say, “Yes. We have the legal and moral right to make it look like an E-type. But we won’t”?

It’s not as though there isn’t a taste for retro designs right now. Fiat has the 500, which, in London at least, seems to have taken a 75% share of the market. You also have the Mini, which is bought by everyone else. Ford has unveiled images of what it thinks a modern-day Cortina might look like, and then, of course, until recently we had the Chrysler PT Cruiser . . . which shows, I suppose, that things don’t always work out as well as the company hoped.

Speaking of which. The Volkswagen Beetle. When I was first introduced to the reincarnated version, I was much taken by it. I thought it was a great idea to clothe the VW Golf in some Wehrmacht clobber and fit a vase. I even considered buying one.

I’m glad I didn’t, because quite quickly it became clear VW had somehow missed the mark. Part of the problem is the Bug looked a bit too friendly. And friendly-looking cars — the Nissan Micra is another — always seem a bit gormless. Cars need to have at least a hint of aggression — and the Beetle didn’t.

I thought VW would give up, but it hasn’t. It has come back with another Beetle, which is lower and more purposeful. It has spooky wheels, a menacing spoiler and a hint of the night about it. Think of it as Herbie’s bank-robber cousin.

Inside, the flower-power vase is gone, and in its place you have a dash to match the colour you’ve chosen for the body, an odd glovebox, modern-day electronic equipment and the biggest fuel gauge ever fitted to any car in all of history. It’s the size of the moon. It’s so big you get the sense that you could drive for 3,000 miles in the red zone.

Well, I hate to be a party pooper but I don’t think it has. It looks like a hippie in a Rambo suit. The Beetle may have been a by-product of war but it became a symbol of peace. And the new aggression? I don’t know. Imagine a CND symbol picked out in razor wire. A dove with machineguns.

I suppose you could soften things up with some stickers. The Mini and the Fiat 500 are available with a great many adhesive options designed to conjure up images of Mary Quant or Rome on a sunny day. But what stickers would you put on a Beetle to put you in mind of its origins? Second thoughts, best leave the stickers out of it.

And, anyway, there is no doubt some people like the design as it is. So let’s move on to see what it’s like as a car.

Not bad, is the answer. There’s a 2-litre 197 brake horsepower version on the market, but I tried the clever 1.4 Sport, which has good fuel economy and, thanks to two turbochargers, 158bhp as well. You have to work the six-speed gearbox hard to get at the power but it’s nice to know it’s there if you can be bothered.

The handling’s good, which is due in no small part to what is basically an electronic differential that tames the driven front wheels and allows you to drive like an ape, stamping on the throttle when really you shouldn’t.

Mostly, though, it is a comfortable and quiet, easy and relaxing cruising machine with some genuinely nice touches. The big glass sunroof is one, and the optional Fender sound system is another, partly because it glows at night, partly because the sound is good but mostly because it’s a Fender. And who wouldn’t want that in their life?

In essence it feels very like a Golf, and that’s not surprising because, of course, under the Hitler suit that’s what it is. You don’t get the practicality of a Golf — it’s quite cramped in the back — but at least the boot is bigger than it was on the last Beetle. You do, however, get a much higher standard of fit and finish, because the Golf in made in slovenly Germany, while the Beetle is made in Mexico — a byword for fastidious attention to detail, as we know.

So. The nub. The price. The Beetle costs about the same as the VW Scirocco, which, of course, has the same engine. And that seems to be rather clever. You choose. Retro or modern? Maybe that’s what Jag should have done with its new car. F-type or G-spot?

Search for and buy a VW Beetle on driving.co.uk