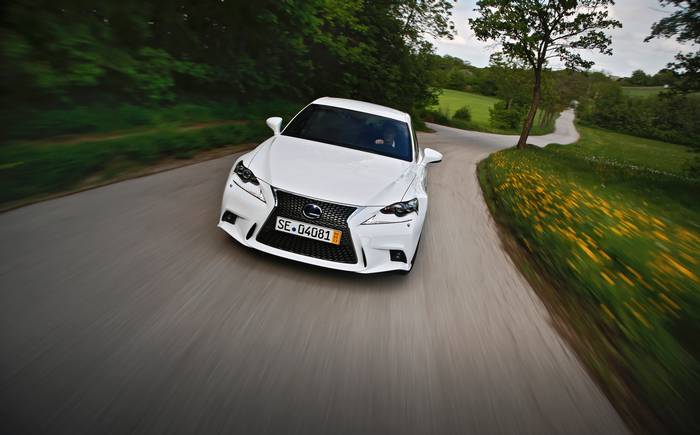 OVER the millennia, man has been consumed by a need for speed. In the Stone Age the fastest runners would catch the best food, and that made them the kings of the hill. Then came the horse, and it was the same story here. Genghis Khan was successful because his cavalry soldiers wore silk armour, and that made them faster.

In the days of steam, engine drivers would compete to see who could wrest the best times out of their locomotives, and at sea, liners would stage races across the Atlantic. Then, in the Cold War, whoever had the fastest jets was deemed to be winning.

Search for and buy a Lexus IS on driving.co.uk

When I started driving, it was all my friends and I talked about. Which one of us had the fastest car? I would spend hours scouring the auto-porn magazines for evidence that my Volkswagen Scirocco GLi was faster than Andy Scott’s Vauxhall Chevette HS. And when we were out and about he would do everything in his power to demonstrate that it was not.

But now something strange has happened. Speed no longer seems to matter. Concorde has been replaced by the fuel-efficient Boeing 787 Dreamliner. HS2 is being questioned because of the cost and the impact it will have on “communities”. And on the roads everything possible is being done to slow us down. Not that long ago Frank Beard, the drummer with ZZ Top, said he had a Ferrari because that way “I can leave for the party later, get there first, stay longer and still be in bed with someone before anyone else”.

Today, though, I listen to teenage boys discussing their first cars, and all they ever seem to talk about is fuel consumption. My son is extremely proud of his Fiat Punto TwinAir, not because of the snazzy wheels or the turbocharger but because it can do more than 60mpg. Which means he gets to the party after everyone else but has more money to spend on beer. Which means he can’t drive home afterwards and has to sleep on the floor.

These, then, are strange times, which brings us to a strange car. The new Lexus IS 300h F Sport. It looks extremely aggressive. There are fat alloys, sharp daytime running lights, a lean-forward stance and a grille so big I’m surprised it doesn’t have its own moon. This is a car that trumpets a very clear message to the rear-view mirror of drivers in front: “Get out of my way.”

It’s the same story on the inside. The dash is a direct copy of the cockpit in the brilliant Lexus LFA supercar. You have dials that move about, information you didn’t know you needed, a mouse to operate the command and control system and a device that coughs discreetly, like a butler, when you are approaching a speed camera. You can turn this off. Not sure why you’d want to, though. The seats are body-hugging and superb. There is space for many, and you get a large, sensible boot into which you can put things.

So, what we have here appears to be an interesting alternative to the BMW 3-series. A front-engined, rear-wheel-drive sports saloon car with the added benefit of Japanese electronics and Lexus quality. However . . . It takes about four seconds for you to realise that this is not a sports saloon at all. Instead it is a car tailored for today and our new-found desire to save money. This is a car built for one thing: economy. This is a hybrid.

The four-cylinder petrol engine is designed not to produce as much power as possible but as little friction. Then you have the electric motor, which cuts in and out seamlessly. And then there’s the electronic gearbox . . .

It simply doesn’t feel or sound like any car you’ve driven. The revs rise and fall instantly. There are no gearchanges as such. And because the noise it makes has nothing to do with the speed you’re going, you do tend to arrive at corners either far too quickly or nowhere near fast enough.

Meanwhile, on the dash you get read-outs telling you all sorts of things that you don’t really understand. You can learn, for instance, which motor is driving the wheels at any given moment and when momentum is being used to make electricity. Drive lightly and you are told you are being economical. Mash your foot into the carpet and you are told you are using energy. I know that already. My foot’s halfway through the bloody firewall.

They say it will get from standstill to 62mph in 8.4 seconds, which is respectable enough, but at no time does it feel even remotely sprightly. You put your foot down on the motorway and it’s as though something is broken. There’s more noise but no more speed. Not until you’re going past Penrith, at least.

You can put it in Sport S+ mode, if you like, which brings up a rev counter but precious little else. So although the front end is barking orders at the car ahead, you’d better hope it doesn’t pull over, because you sure as hell aren’t going past. The IS 300h feels like a car. It looks like a car. But it doesn’t behave like one, and I’m afraid I just found it annoying.

But I’m being a dinosaur, aren’t I? I’m judging the baby Lexus on speed, which these days is bit like judging a dog on its ability to write poetry. I care about speed. Frank Beard cares about it. But everyone else? No. Not really.

Which brings us on to the important news. If you go for the non-F Sport model on skinny tyres you get an output of just 99 carbon dioxides. A meaningless figure to the likes of me, but if you’re a higher-rate-tax-paying company-car driver, that low, low figure is going to save you a fair amount.

Then there’s the question of fuel consumption. Well, officially, you’re going to get about 60mpg, which sounds almost unbelievable. And that’s because in the real world it is. In town, where the hybrid system really works for a living, the Lexus will be massively more economical than all its rivals. But on the motorway or the open road you will have to work that throttle hard to keep up, and that will bring the economy figures way down.

Which raises a question. Why did Lexus not do what every other car maker does and fit a diesel? Why go to all the bother of fitting two motors? Why have all that extra weight? Why make it all feel so different? Simple answer, apparently. Lexus doesn’t do diesels. Doesn’t know how.

I make no bones about this at all. If I were in the market for a mid-size executive saloon car and I had one eye on the fuel bills, I’d buy a BMW 3-series with a diesel engine. It would be torquey, fast, cheap to run, smooth and conventional.

The Lexus is the future: of that we can be fairly sure. But I’m not sure we’re ready for it yet, because the dinosaurs have their petrol engines and the new youth have their diesels. Which means hybrids are catering for a market that doesn’t yet exist.

I’ve seen the future ‒ and I don’t like it

Search for and buy a Lexus IS on driving.co.uk