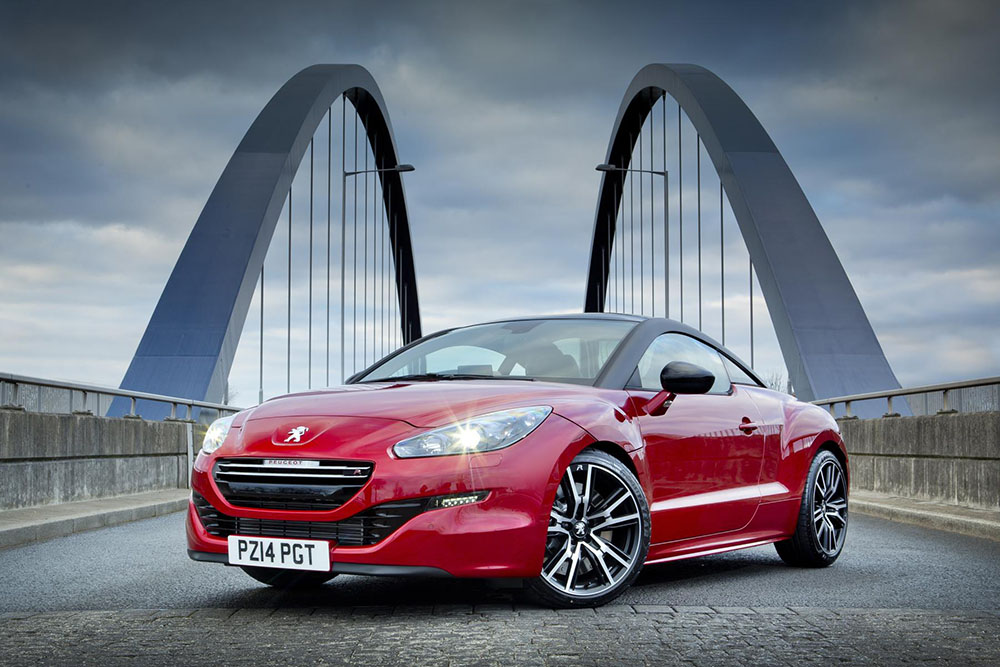 What is the Peugeot RCZ-R?

To borrow from The Cure, the R is Hot Hot Hot!!!. This is the high-performance flagship of the RCZ range; the two (plus two) seat coupé that is a rival to the likes of the Audi TTS, BMW 228i M Sport and VW Scirocco GTS.

Did we mention it’s hot? The civilised little 1.6-litre, four-cylinder petrol engine of standard RCZs has been turned into a bit of a bad boy by Peugeot Sport, the division of the French car company that has designed, built and raced some of the most successful rally and race cars ever.

Owning an RCZ with an R badge will cost drivers £32,000, which is £5,100 more than previously most expensive RCZ. Setting aside the differences in standard equipment, the big change is that the engine’s power has climbed from 200bhp to 270bhp. With it come larger brakes, a limited-slip differential and more aggressive suspension, all aimed at the driver who is seeking a driving experience that is as thrilling as the RCZ-R looks.

Search for and buy a used Peugeot RCZ-R on driving.co.uk 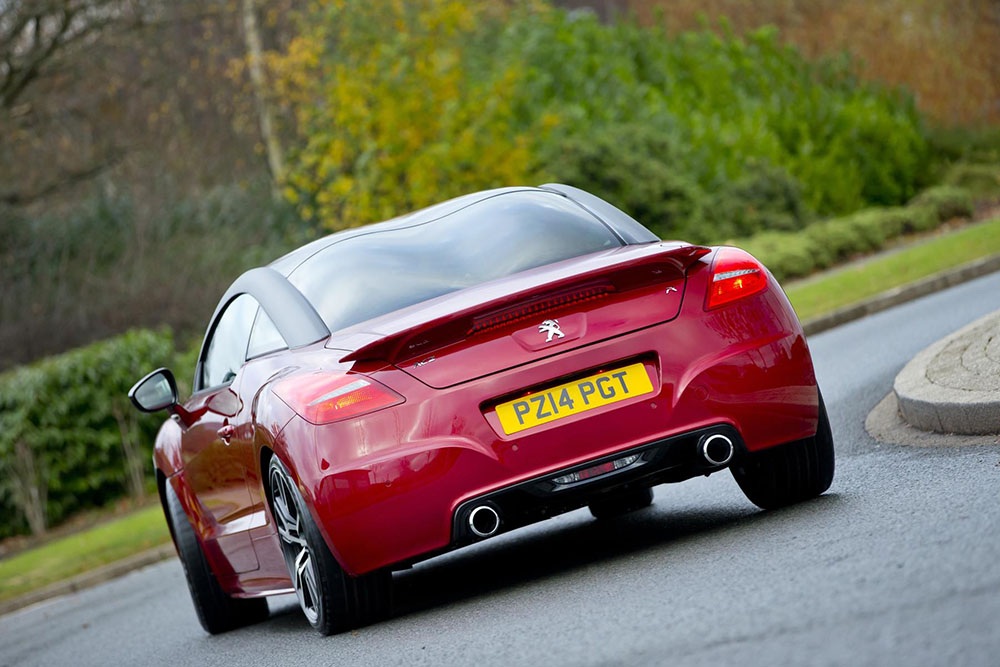 What can we tell you about the engine? Well, it’s bananas, bonkers, a bat out of hell. It has an impressive power output relative to its capacity – 270bhp from a 1.6-litre, four-cylinder engine was once the exclusive preserve of cars raced in motorsport. How long will the engine last? Who knows. But one thing’s for certain: you’ll enjoy it while it does.

There is a slight delay between pressing the throttle pedal to the floor and charging for the horizon, as the turbo builds pressure and forces more air into each cylinder chamber. From 2,000rpm there is plenty of pulling power, then at 3,000rpm, all hell breaks loose, the engine sending the car scurrying along the road like the aforementioned bat.

Applying full throttle requires a degree of common sense. If the road is not perfectly smooth, the RCZ-R’s front tyres will struggle to find traction in the lower gears. The nose darts from side to side, the steering wheel writhes in the driver’s hands and the car feels every inch the live wire it is.

A mechanical limited slip differential and electronic traction control system both do their best to contain the power and save the tyres from spinning and smoking like a Catherine wheel. Neither, however, can stop the car’s nose running wide when accelerating out of a bend.

This would be a problem in other cars, but the raw nature of this coupé means that the driver can feel what the tyres are doing and react instinctively. A sharp lift of the throttle will swing the tail round in a playful fashion – something that hasn’t been a feature of Peugeots since the 205 GTi of the 1980s.

There are no fancy selective suspension systems used here: the springs and dampers are set to stiff, and have relatively little travel. Drivers who don’t like it will have to lump it, and plenty may fall into the latter camp. The RCZ-R hops and skips around on a B-road like a hyperactive toddler fuelled up on a diet of gummy bears.

As for the gearchange, it’s best described as workmanlike. It has a long, notchy throw, and can feel vague when changing down from sixth to fifth or fourth to third gear.

Given that this coupé is capable of 0-62mph in 5.9 seconds, is restricted to 155mph and has mid-range acceleration that never fails to drop the driver’s jaw, it’s reassuring to know that the uprated brakes are powerful and have no trouble slowing the car. However, they do have an annoying habit of squealing when pulling up in slow moving traffic.

Peugeot claims it will return nearly 45mpg on the combined fuel cycle and emit 145g of CO2 (making for a £145 annual road tax bill). That mpg is respectable on paper but in fact we found 40mpg was easily achieved.

The biggest issue with the R is that should its owner wish to cruise on the daily commute, the car never knows when to give it a rest. The stiff ride comfort and the booming exhaust at motorways speeds are tiring, and add to the impression that the R is something of a rough diamond. 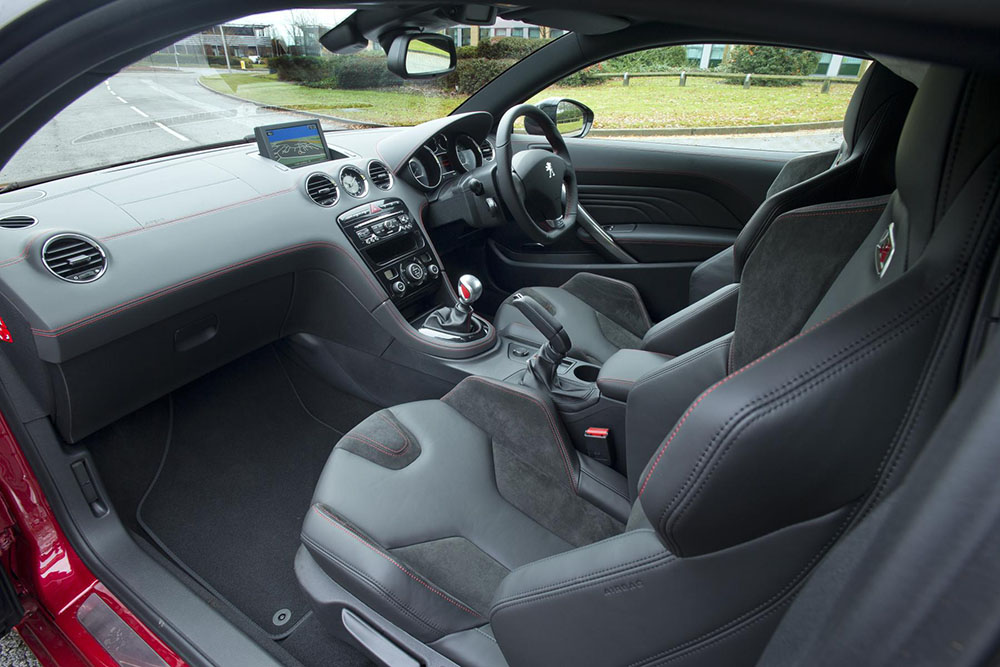 This is where the car is feeling its age. An Audi TT, VW Scirroco or even a Golf R have more stylish-looking interiors, which also feel more robust. They are fitted with better infotainment systems with touchscreen functionality, too.

The RCZ-R’s dashboard appears to have been designed to mimic past supercars like the Honda NSX. That would be fine, only it’s an approach that went out of fashion over 20 years ago, as car manufacturers realised that it’s probably a bad idea to make the driver of a high-powered sports car have to stretch like a yoga master to reach the switchgear.

And even the helpful shortcuts to operating day-to-day controls are flawed, as the stalks for the cruise control and radio system, poking from the steering column, are an ergonomic disaster, completely hidden from view by the wheel.

However, it looks pleasing. There’s lashings of leather and alcantara trim with contrasting-colour stitching, the sports seats are excellent and there’s a wide range of adjustment to get comfortable. But annoyingly the driver’s left shoe can foul the clutch pedal when stretching for the footrest.

The back seats are barely big enough for one person sitting astride them, let alone two. Think of them as somewhere for bags when you can’t be bothered to use the 309-litre boot, which has a liftback tailgate.

Read the review of the Peugeot RCZ range

Search for and buy a used Peugeot RCZ-R on driving.co.uk